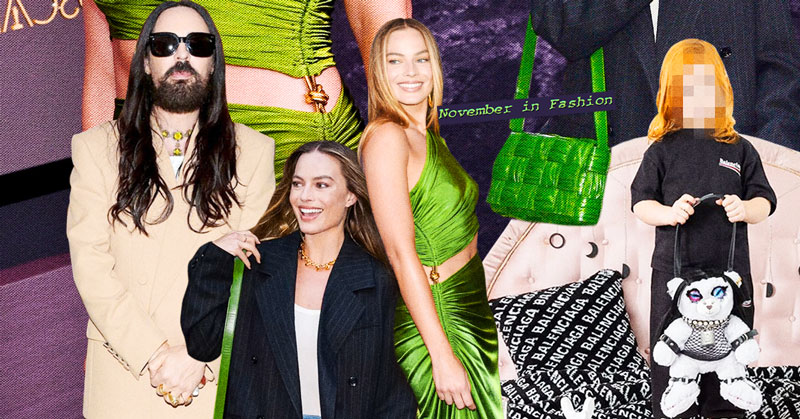 November in Fashion: Is It Goodbye Balenciaga, Raf Simons and More?

While we all know that September and October witness the most prominent presentations in fashion every year, November 2022 has become notorious for its onslaught of different headlines. From campaigns gone wrong, sudden exits and year-end musings, the mainstream fashion industry has had a lot to talk about. So if you’ve been struggling to keep up with the updates, don’t worry. Up ahead, we dissect the biggest fashion news that rocked the month of November.

Margot Robbie is all smiles in Bottega Veneta

In 2018, Chanel announced Margot Robbie as their global ambassador. Since then, she has made public appearances in the French brand’s exquisite pieces, often pairing her looks with smizes, pouts and emotionless expressions. So when the actress stepped out in Bottega Veneta on the red carpet and elevated her smart casual wear with the Cassette Bag around, fans pointed out that our modern-day Harley Quinn is all smiles. This caused quite a stir, raking in multiple articles and headlines that we consider fashion news. Could her smizes be a directive in her Chanel contract? Is Margot Robbie in palpable glee that she’s free from the shackles of Chanel, or just happy that she has more wiggle room to explore different ‘fits and brands?

It seems like the last option is the most viable because she walked the BAFTA: A Life in Pictures red carpet in a black tweed set from Chanel’s Spring/Summer 2023 presentation. Yes, she beamed widely for the cameras here, too. Either way, we’re living for her branching out into new looks. Maybe the Bottega Veneta ones just mark a new fashion beginning for the actress.

RELATED: Martin Bautista Celebrates Life and All the Nuances That Come with It in His 15th Anniversary Collection

After a horrendous set of campaigns, Balenciaga sues production company

In case you missed it, Balenciaga has taken over a lot of fashion news reports and headlines. Its most recent The Objects campaign, lensed by Gabriele Galimberti, features children holding teddy bears all decked in bondage. Meanwhile, in one of the photos for the Spring/Summer 2023 adidas capsule, the props under the limited-edition handbag feature proceedings of a court ruling surrounding a child pornography case. In the same campaign, an image features a Michael Borremans art book—an artist known for disturbing depictions of nude children committing violent acts. These images, found in separate campaigns, horrified and enraged audiences who condemned the brand for signing off on these.

More pieces of so-called evidence piled up, further bringing the brand under scrutiny that even Kim Kardashian spoke about re-evaluating her collaboration with Balenciaga. Finally, after a few days of silence, the luxury house has come out with a statement explaining their side—and a lawsuit against the production company responsible for the second piece of evidence. Balenciaga hired production North Six, Inc. and set designer Nicholas Des Jardins to lead the campaign in that department. Upon the backlash, the brand writes that the ad was “blown out of context,” which led to “extensive damages.”

Since then, Bella Hadid removed posts regarding the campaign, and Kim Kardashian admitted that she is re-evaluating her relationship with the brand. In the thick of the controversy, Business of Fashion has revoked its award to Creative Director Demna Gvasalia due to Balenciaga’s failure to come forward and explain its side when asked.

RELATED: The Emancipation of Maymay: An Unkabogable Style Evolution

Less than a decade after his appointment, the Italian designer exits from the luxury brand

In this month’s surprising fashion news, Alessandro Michele exits Gucci after spending over 20 years with the brand. Since adopting the Creative Director position for Gucci, Michele has rebranded the luxury house into an indomitable force in the industry. He made his mark by debuting strong with a romantic and eccentric ready-to-wear collection. The brand’s aesthetic since then veered away from Frida Gianni’s refined style and brought it closer to a younger audience through 70s-era maximalism and glamour, all the while challenging the previously rigid boundaries of gender, sex and race.

Gucci and Alessandro Michele didn’t explain the reason for his departure. But according to Women’s Wear Daily, an anonymous source has divulged that Michele was “asked to initiate a strong design shift.” But as it turns out, the designer failed to deliver. Nevertheless, whether this is true or not, Gucci still experienced a lasting rebrand with Michele at the helm. Therefore, this era of Gucci will remain a large part of its history.

Raf Simons closes the Doors of his eponymous label

SS23 serves as the last collection

This bit of fashion news could be one of the most unexpected. After almost three decades of revolutionizing the clothing industry with his minimalist and tailored designs, Raf Simons closes the doors of his eponymous label. Simons then held positions in Calvin Klein, Dior and Jil Sander before becoming one of Prada’s Creative Directors. In an Instagram post, Raf Simons briefly announced the end of the label. However, many believe that he’s gearing up for the time that his fellow creative director, Miuccia Prada, retires. Since its establishment as “Raf” in 1995, the underground streetwear brand transformed into a fashion mainstay that influenced both menswear and womenswear.

Back in October, a thousand fashion enthusiasts eagerly scuttled into London’s mega clubbing venue, Printworks, to view Raf Simons’s latest Spring/Summer 2023 presentation. Little did they know that they would witness Simons’s last collection for his eponymous brand. The collection, punctuated by graffiti prints, neon hues and biker jacket combinations, takes cues from countercultural music scenes populated by the youth like— electronic and new wave—something that Simons is known for doing with his creations.

It’s been an entire year since the world lost Virgil Abloh, founder of the streetwear label Off-White and former Creative Director of Louis Vuitton menswear. Abloh’s legacy included opening many doors for Black creatives to make waves and changes in a predominantly white fashion industry, leading many to view him as a revolutionary creative force. A few months after his passing, Off-White appointed Ib Kamara to follow in his footsteps and to continue the label he built from the ground up.

Louis Vuitton menswear, however, is still expected to appoint a new Creative Director to lead the way. Abloh’s last collection with the luxury house was released posthumously for Fall 2022 Menswear. Meanwhile, a collective of designers who closely worked with the late visionary exuded his aesthetic and legacy for the Spring/Summer 2023 Menswear collection. As early as January 2022, insider chatters have named Jonathan Anderson of JW Anderson and Loewe, fashion designer Martine Rose and even Telfar’s own Telfar Clemens to fill the position. But as months passed, the position remains vacant.

The fashion industry is still in the dark as to who’ll continue Virgil Abloh’s blazing legacy. If you have a hunch, sound off in the comments below!