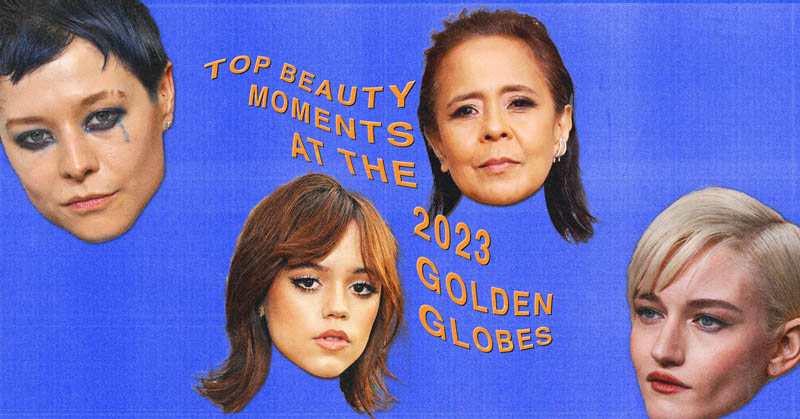 After a brief hiatus, the controversial Golden Globes are back, signaling the start of awards season. On Tuesday, A-list celebrities arrived in style and showed off their best looks on the red carpet—from our very own Dolly De Leon to Negroni Sbagliato enthusiast Emma D’Arcy.

Here are some of our favorite beauty looks from the recently concluded Golden Globes:

Celebrity makeup artist Vincent Oquendo did a 1960s-inspired cat eye tying it all together with white eyeliner. Pro-tip: Add this on the waterline, which instantly makes eyes bigger and more awake! And hey, we just love a classic MLBB moment.

RELATED: Reach or Real: Wednesday Theories That Might Be Answered in Season Two

Mama Riri makes a rare red carpet appearance at the Golden Globes with beau A$AP Rocky, the best-dressed couple of the night. She radiates in a “pink golden glow fantasy” with a full face of Fenty Beauty and Fenty Skin products by the one, the only Priscilla Ono. Her showstopping structural updo, on the other hand, was created by Yusef, giving Hollywood glam.

Mmmm, stunning! The Game of Thrones star and Negroni Sbagliato enthusiast made their debut on the Golden Globes red carpet wearing head-to-toe Acne Studios. On their scene-stealing look, they tell Vogue, “I was going for a ‘child prodigy at the big piano recital’ sort of look, except we added a single tear to the make-up, so I guess the recital went really badly.”  Blue really is the warmest color.

Professional on-screen scammer Julia Garner gets another Golden Globe win for the role of a lifetime: Ruth Langmore in Ozark. The highlight of this look inspired by her baby pink Gucci gown? Modern piecey bangs by hairstylist Bobby Eliot.

We predicted barely-there microbangs to be one of this year’s biggest beauty trends, and social media personality Liza Koshy channels just that with a snatched top bun—and a lot of gel. The look was perfected by glam team duo Dominique Della Maggiore and Castillo.

RELATED: From Gemini Hair to Grunge Glam, Here Are Beauty Trends Reigning in 2023

The Only Murders in the Building actress and Golden Globes nominee got dolled up for the ceremony inspired by the 90s, sporting plum shadow (from the Rare Beauty Came To Play Eye Shadow Palette), to match her show-stopping Valentino gown, and an effortless high ponytail.

Let’s not forget this super cute moment between Selena and her date for the night, her baby sister Gracie.

“Captain” Dolly De Leon goes down in history as the very first Filipino talent to be nominated for a Golden Globe award, in the Best Supporting Actress – Motion Picture category for her role in Ruben Östlund’s Palme d’Or-winning film, Triangle of Sadness. De Leon stuns in a leather piece by AZ Factory, accentuated by a shimmery smoky eye and a nude lip. And let’s not forget her slicked-back hair!

Do you have any favorite Golden Globes beauty moments? Leave it in the comments below!