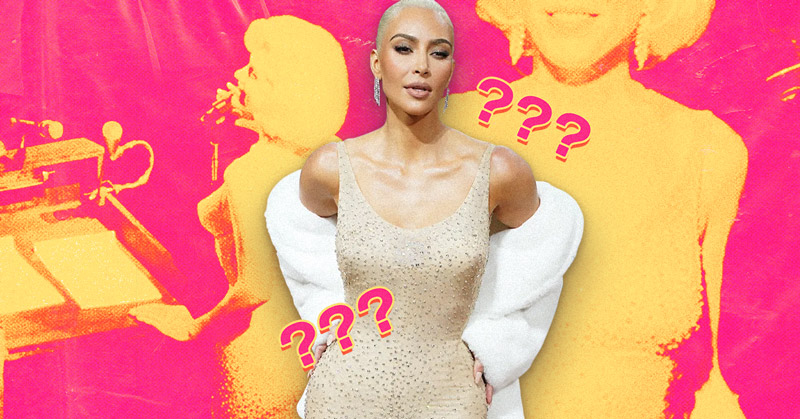 Did Kim K steal Marilyn Monroe’s thunder in an attempt to pay her homage?

It’s been over a week since the 2022 Met Gala. Per usual, celebrities all decked out in their best (sometimes, not always on-theme) outfits strut the red carpet at the steps of the Met. For 2022, the Costume Institute explores In America: An Anthology of Fashion. The second part of their two-pronged exploration of American fashion highlights New York’s Gilded Age (1870 to 1890). This year, one of the most polarizing outfits goes to Kim Kardashian for the worst reasons.

Kardashian arrived at the Met Gala red carpet wearing Marilyn Monroe’s “naked” dress from 1962. Sketched by Bob Mackey and made by Jean-Louis, she wore Marilyn’s gown from she serenaded John F. Kennedy during his birthday party. Kim Kardashian took cues from the original wearer by bleaching her hair platinum blonde and accessorizing with a fur coat. While it’s common practice to wear archive fashion pieces, Kim Kardashian’s choice of actually donning a part of history—even for a few minutes—caused a controversy. One that amplified once the BTS footage came in. Sure, she did change into a replica as she entered the MET, but her time on the red carpet posed considerable risks.

Ripley’s Believe It or Not! Museum currently houses the original “naked dress.” Despite its $10 million dollars value, Ripley’s should treat it as a historical artifact that should be well-preserved. Instead, the private entity lent it to Kim K for the affair. And as shown in their YouTube shorts—they were more than thrilled. But the general public and historians were not. We break down the controversy surrounding Kim Kardashian’s supposed homage to the icon.

According to the LA Times, the vintage Jean-Louis dress uses an exquisite souffle fabric. While souffle is durable and resilient when new, it weakens and wanes with age. So to wear such delicate material that’s more or less 60 years old poses a significant risk to the dress. In addition, hand-sewn onto the fabric are a thousand beads, all vulnerable thanks to gravity. In the video above, the handlers massage the dress upwards to fit Kim K’s bum—isn’t that a red flag? After all, Marilyn Monroe told Jean-Louis, “I want you to design a truly historical dress, a dazzling dress that’s one-of-a-kind, a dress that only Marilyn Monroe could wear.” Doesn’t that mean she wants to keep it unworn even after her passing?

Ripley’s defended their decision to lend the mogul the dress, especially emphasizing that they talked to conservationists, appraisers, archivists and insurance to protect the gown. Nonetheless, historians and conservationists also raised the alarm about external conditions that could endanger the dress. For example, bright lights, sweat and the movement needed on the red carpet put the gown at risk. What happens if Kim K encounters an accident on her way up the steps of the met?

Kim Kardashian was gifted a lock of Marilyn Monroe’s hair. Hair that was stolen off Marilyn’s head by the man who handled her body in the morgue. He stole her hair to give to his wife as a souvenir. A SOUVENIR. Even in death, people wanted a piece of her. It’s disgusting.

Perhaps the more profound implication of lending this dress to wear is the change it can bring to its actual cultural importance. After all, Marilyn Monroe arrived at JFK’s birthday party in a rather revealing dress. Sheer, skin-colored and tight, the actress had already crossed the line in the eyes of conservative ideals. Allowing Kim Kardashian to wear it for the Met Gala—which, others would argue, is still off-theme—sadly steals the thunder from Marilyn herself. As a result, Monroe’s cultural impact is now inevitably intertwined with Ripley’s and Kim Kardashian.

Another shocking reason behind all this was that Ripley’s also gifted Kim Kardashian a lock of Marilyn Monroe’s hair. While the discussion on whether or not it’s authentic and lifted from the head of the actress continues, the entire thing is just bizarre. Yes, Kim K’s “crazy voodoo shit” comment included. Personally, I see this as a move to further profit off Marilyn Monroe’s legacy. Instead of highlighting the historical and cultural importance of one of the leaders of the era’s shift towards sexual liberation, Ripley’s and Kim Kardashian made a spectacle out of it all. Perhaps bringing the dress out of the vault was never to remember her legacy. But a move to ride on the coattails of such an iconic actress.

Kim Kardashian being allowed to wear Marilyn Monroe’s dress is just plain disrespect. A piece of fashion history made for an icon completely ruined. Marilyn should have been the only woman to wear that dress. Exploited in life and sadly exploited in death 🤦🏼‍♀️

RELATED: 5 Netflix Documentaries Perfect for Music Fans Who Want to Learn About the Industry

It’s one thing to borrow iconic dresses, such as the case of Jennifer Lopez’s green Versace number from the 2000s. But with the amount of cultural impact Marilyn Monroe’s dress had, it’s better off showcased in museums and exhibits. So here’s to hoping that this controversy becomes the starting point to understanding the history of the icon. May this pave the way to better and more respectful homages in Marilyn Monroe’s name.

For more required research, check out the Netflix Documentary The Mystery of Marilyn Monroe: Unheard Tapes.