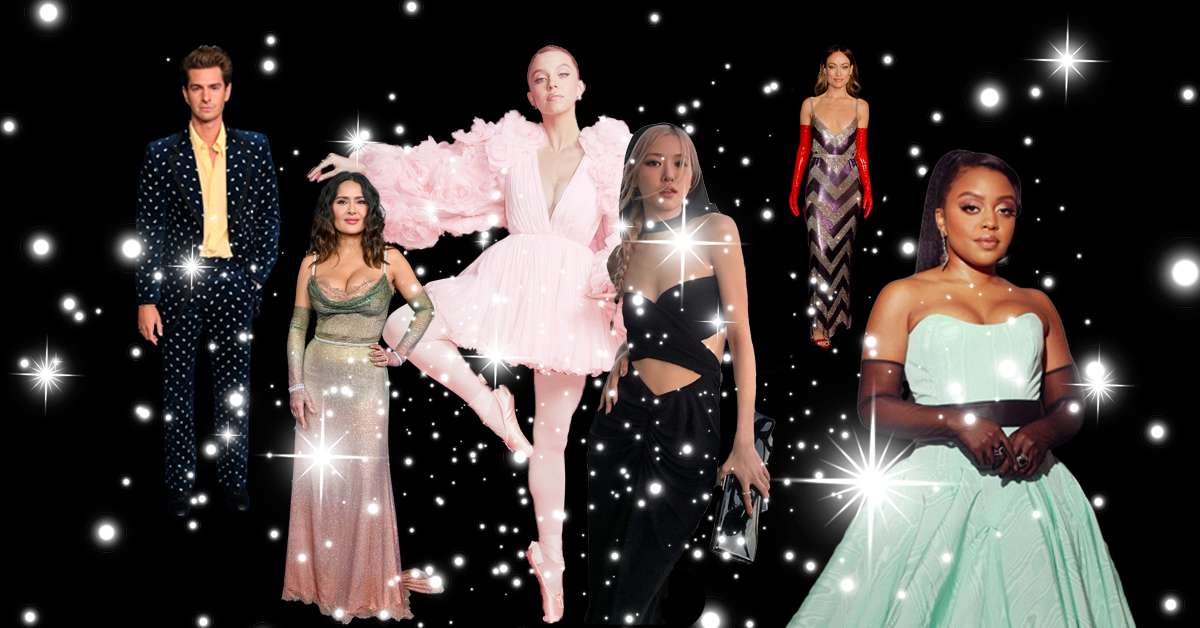 From fairytale fantasies to spruced-up suits, here’s what we saw

Of course, a black-tie event calls for major fashion moments. Well, it’s safe to say that everyone did not disappoint. Ahead, we list down the trends we spotted at the LACMA Art + Film Gala.

While we hold red, and in this case, blue carpet outfits to a certain standard, we all love playful experiments that aren’t afraid to shine.

Take Sydney Sweeney’s balletcore number by Giambattista Valli. The voluminous, rose-shaped sleeves, A-line skirt and pale tights appear plucked from fairytale ballet shows, a perfect complement to the actress’ performance history. On the antagonist side stands Inventing Anna and Ozark actress Julia Garner, whose green and black velvet number just screams evil witch—complete with a train that billows when she speedily walks away. Lastly, BLACKPINK member and Anthony Vaccarello’s beloved muse, Rosé, channels a Runaway Riding Hood with this all-black Saint Laurent dress. The wraparound top teases some skin while fully hiding her legs with the floor-grazing skirt, accessorized with a black clutch and gold bracelet. But a detail well done? Her dainty little braid cascading down one shoulder.

RELATED: Why You Should Visit Salvacion Lim Higgins’ Exhibit at the Manila Metropolitan Theater

As per ush, the LACMA Art + Film Gala exists with the help of Gucci—the brand that dressed many of the guests arriving. And perhaps one of the standout trends is the house’s way of striking balance. Just look at Jodie Turner-Smith, Salma Hayek and Olivia Wilde, all dressed in Gucci for the evening. To even out the low necklines, they accessorize with elbow gloves. In the case of Jodie Turner-Smith and Salma Hayek, they used the same fabric from the dress. But for Don’t Worry Darling director Olivia Wilde, the red latex gloves make for a nice contrast to her sparkling printed dress.

Abbott Elementary writer and actress Quinta Brunson follows suit by pairing her Cinderella-esque Rani Zakhem gown with sheer black gloves. The shade matches the fabric that cinches her waist while hiding some skin to balance the sweetheart neckline.

It seems like sheer dresses are here to stay—but it doesn’t mean you need to show it all. Instead, take cues from Sofia Boutella’s dress, keeping her fully covered while teasing some leg with her sheer skirt. Meanwhile, Kendall Jenner may have worn more daring sheer numbers in her career, but she takes a different approach with this Burc Akyol look. The highlights? The metallic skirt that urges you to take a second look and the strategically placed coverups.

Best believe that shine, sparkles and anything that shimmers will never leave the red carpet. For this year, personalities leaned towards smaller jewels, sequins and a lot of glittery accents for their formal wear. Addison Rae arrives at the LACMA Art + Film Gala gleaming, but the Jean Louis de Scherrer dress is tastefully understated thanks to its dark hue. Janelle Monáe experiments with a burst of textures that shine under the light: sequins, jewels and crystals against a canvas of neutral colors. Meanwhile, Ethan Torchio, Thomas Raggi, Victoria De Angelis and Damiano David of Måneskin come in their coolly coordinated Gucci outfits—lustrous suits included.

Speaking of suits, celebrities found another way to spice up the traditional coordinated outfit. Halima Aden takes the traditional black suit and accentuates it with strategically draped red fabric. Meanwhile, Andrew Garfield’s patterned Gucci suit pairs well with the yellow dress shirt, adding some fun and vibrancy to the black-tie event. Lastly, Jude Law’s Brioni look may look mismatched but still comes off classy. The deep brown of the coat adds a subtle contrast against the black trousers and turtle neck, proving that formal wear need not be stuffy. Plus, it’s oversized but not frumpy—something that proves to be a challenge when sizing up.

Aside from the ones mentioned above, a couple of celebrities made serious cases of their own. Billie Eilish and Jesse Rutherford bring back pajama chic. And have you seen Paris Hilton’s glittery, barely-there ensemble? That’s hot. With the number of looks we saw this year, best believe we’re already all eyes for the next.

Did we miss any trends? Sound off in the comments below!