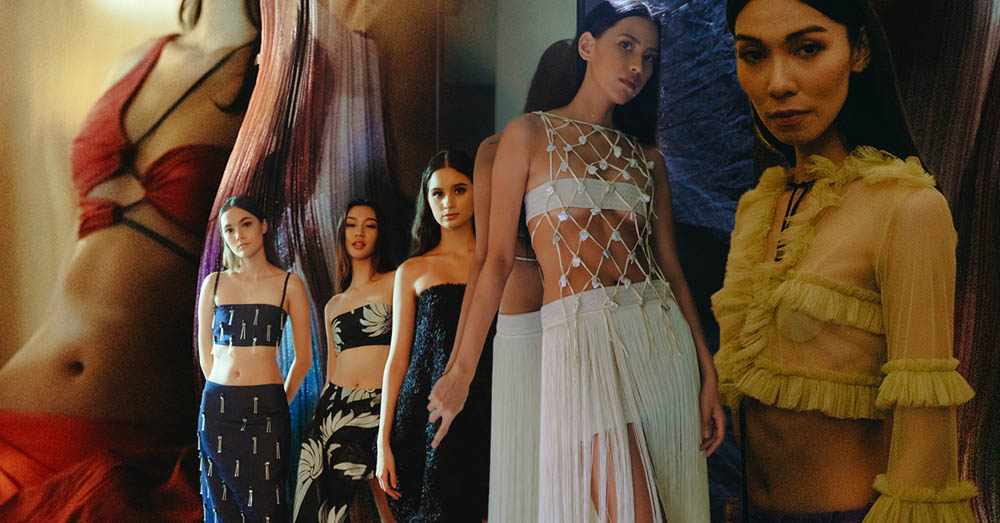 In short, Martin Bautista is sliving

A good secret is difficult to keep. So we can only imagine the agony of Filipino designer Martin Bautista when he had to put off and hide his 15th-anniversary collection from the world. “This was intended to be shown back in September 2019, but the pandemic happened,” he tells Wonder. But as restrictions ease and the Philippines crawls back into normality, there seems to be no better time than now to debut this joyful, opulent yet experimental collection with a very hopeful point of view.

Presented at Bench Fashion Week 2022, Martin Bautista’s signature flair never really gets old. Though the designer named the collection Still Life, there’s nothing quite “still” about his pieces that move when one walks and are provocative in unexpected ways. Such can be said about the tiered and ruffled apple green tulle bolero and the fringed beach-ready ensemble adorned with baroque pearls.

Speaking of pearls, the undone and raw margarites gave birth to the collection’s name. “It was inspired by one particular look that I started on. I took a photograph of these raw pearls just with my phone and turned them into a print, then made it into a dress and embellished it with the actual pearls na pinicturan ko (I took a photo of),” reveals Martin.

The said dress can be considered a key look of the collection, too. The piece, which is composed of an open bolero top with cutout shoulder sleeves and pearls dangling by its hem, paired with a maxi wrap skirt made from the same fabric, is arresting and has a sense of toughness to it despite the neck-to-toe emebllishment of pearls. It’s also the first time the designer manipulated a digitally printed fabric of his design. It makes it hard to believe that this almost abstract pattern originated as a simple phone pic—but that’s part of Martin’s magic.

The designer also tried to dip his toes into more utilitarian pieces like gilded cargo pants made in holographic taffeta and denim covered in tulle, which he juxtaposed with ultra-feminine and skin-baring tops. The combination undeniably looks fresh. “It’s kind of very genderless. But it’s sitting along these feminine tops and dresses. And na-excite ako sa (I got excited with the) [design] tension that was created with it.” That excitement was palpable because you wouldn’t (and couldn’t) forget the look once it was on the runway. The reason for the unlikely pairing? One can attribute it to the good old feeling of pressure being a designer of his tenure.

“I felt like I couldn’t live my life. People’s eyes are on you and are waiting for what’s going to happen next. And every time I come up and create a collection, people always ask me, ‘What’s next?’ But I don’t just want to create collections because I can,” the designer tells us, firmly. “I want to create collections when I’m able to live my life and have something to say,” as he admits to being burnt out at some point.

Who can blame him? With social media feeding content 24/7, it’s easy to want “newness” at rapid speed. The same can be said when it comes to clothes and wanting to dress in the latest viral TikTok ‘fit or trendy runway look. There’s always that pressure to never get left behind. Lamely put, the FOMO just gets worse as social platforms progress. “When that happens, it’s time to live life first. I need to breathe and step away from work. So that I can get back on track creatively,” shares the designer.

Once he felt like he was living life, the inspiration seemed to flow naturally. He even rediscovered Thai silk and began to manipulate it in ways you’d least expect. “It’s fabric na parang mabibili mo sa mall (that you can buy at the mall). It’s very 90s. But I wanted to make it sexy and ‘now’ and modern.” Those pieces give off that Y2K sex appeal but with the newness of 2022s love for cutouts and celebrating the female physique.

He updated his signature draped skirt with peek-a-boo slits. The more show of skin, the better. “The kind of sexiness that I was looking for was ‘easy.’ Not the kind with clothes that have a lot of lining or whatnot. I also wanted to exude a young kind of sexy with a sort of youthful energy,” notes Martin.

When asked about the women who’d wear his clothes, he has a distinct perspective. “She’s someone who’s always looking for a unique piece. Someone who understands and values original pieces and can translate each piece every day. She doesn’t need an event—she can wear it from the beach to the city. She doesn’t need to be a fashion person but she has a very strong or distinct sense of style.”

There’s that giddiness to his voice when he answers my last question and I circle back to the collection’s name. “Still Life…it also means I’m still here, 15 years in the industry,” quips Martin. He adds, “There are so many layers to the title. It’s also a celebration of life and a sort of coming out. Like we’re all coming out of this pandemic and living life to its fullest again.”