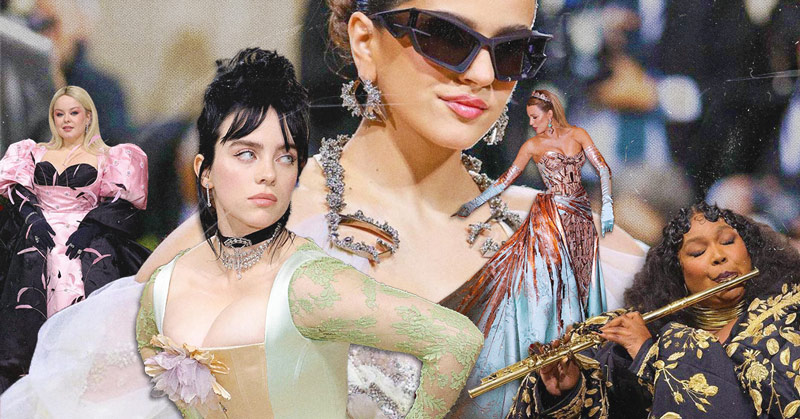 Met Gala 2022: A Return to Regency and Opulence, Escorted by the Original Upper East Siders

“In America: An Anthology of Fashion” highlights the lavish lifestyle of New York’s former elites. And the theme? Gilded Glamour, of course

In case you missed last year’s Met Gala news, the beloved Costume Institute launched a two-part exhibition celebrating the renaissance of American fashion and its response to social and political issues. Part one, In America: A Lexicon of Fashion, was an intimate gala held on September 13 at the Metropolitan Museum of Art in New York.

Despite the belated commemoration due to Covid, stars still walked up the iconic Met steps in ensembles matching the theme—American Independence. And let’s not forget, it was hosted by co-chairs Timothée Chalamet, Billie Eilish, Amanda Gorman and Naomi Osaka. Of course, Anna Wintour served as an honorary chair along with Tom Ford and Adam Mosseri.

The second inauguration, In America: An Anthology of Fashion, was held on the gala’s earmarked date, The First Monday in May (May 2, 2022). The gala attendees encapsulated the grandeur of new money during the Gilded Age of New York (from 1870 to1890). The carpet fell nothing short of excessive textures, corsets and diamonds. Everything needed to fit the dress code, Gilded Glamour. This year’s looks revolve around white-tie and the Gibson girl aesthetic, also known as the “It” girl illustrated in publications and advertisements by Charles Gibson.

The theme refers to a term coined by author Mark Twain in 1873. His book titled The Gilded Age: A Tale of Today discusses the rise of industrialization driven by New York’s original Upper East Siders—the Vanderbilts, Hewitts, Parsons, Rockefellers and Carnegies. Anna Wintour invites us to look at not only the shimmering veil of “nouveau riche” garments but also the history behind the aristocratic society. Underneath the haze of glitz and fantasy was corruption. Industrialists were tremendously abundant but at the expense of working-class immigrants. The Met Ball calls attention to detail and craftsmanship of fashion but brings justice to the voices unheard during a time of greed and oppression.

This season’s co-chair hosts include Lin-Manuel Miranda, Regina King, Ryan Reynolds and our favorite “It Girl of the Upper East Side,” Serena van der Woodsen. Oh, I meant Blake Lively.

As the honorary chairs remained the same, the 2022 Met Gala surprised us with a team of talented directors to curate cinematic scenes to recreate a time of Opulence in American history. Sofia Coppola, Martin Scorsese and Autumn de Wilde were a few of the film masters chosen.

The red carpet was filled with maximalism, structure and regal designs. You can’t look away from designer drips made by Versace, Thom Browne and Christopher John Rogers! Here’s a rundown of this year’s favorites:

Bridgerton star Nicola Coughlan stepped out in true Featherington style custom made by Richard Quinn. Coughlan had initially scrolled through multiple images on Pinterest for inspiration and worked with Quinn to create this iconic leg of mutton piece.

Gigi takes inspiration from the evolution of feminine silhouettes starting from the 1800s. Versace is the perfect candidate for an exaggerated theme, pushing through boundaries in women’s designs.

Lizzo showed up in a figure-hugging corset with a gilded cape that took 22,000 hours to sew. The queen did not disappoint as she took out her matching gold flute and played for the crowd. And yes, everyone went wild!

Quannah has done it again! Back for her second appearance at the Met, the 19-year-old model wears beadwork by indigenous activist Lenise Omeasoo with turquoise eyeshadow to match her tulle gown.

Of course, we can’t forget the moment Kim Kardashian walked the carpet in the original “naked” dress worn by Marylin Monroe during John F. Kennedy’s 45th birthday in 1962.

RELATED: “Richsplaining” and How “Get Your F-king Ass Up and Work” Is Unhelpful Business Advice

The dress pays tribute to Elizabeth Hobbs Keckley, a successful seamstress and civil activist who bought herself out of slavery.

When asked what the inspiration was behind his look, Riz commemorates the immigrant workers behind the glitz and glam of the Gilded Age. Needless to say, the Oscar winner never disappoints.

You know you love her, Blake Lively in custom Versace

Blake Lively patinated the carpet as she walked up the steps of the Met. Her look transformed from a copper ensemble to a green shade inspired by New York architecture and the Statue of Liberty.

Questlove proudly represents Greg Lauren and Gee’s Bend Quilters to highlight the historical background of African American culture and the taboo narratives behind the Gilded Age. The silhouette of his coat is inspired by the legend André Leon Talley who unfortunately passed away last January.

Billie posed in recycled Gucci garments, vintage jewelry and vegan leather shoes. The sustainable queen also remained in theme with a skin-tight corset and bustle. But of course, she added a Gen Z twist with jet black Y2K hair and a velvet choker.

RELATED: Bangs, Braids and Baby Hairs: The Best Beauty Looks at the 2022 Oscars

The Manhattan-born and bred singer did not disappoint as she glided through the carpet with the city on her trail. Alicia was smiling ear to ear as fans chanted her single Empire State of Mind, which features Jay Z.

Rosalia made a jaw-dropping appearance in a custom crème Givenchy gown by Matthew Williams. In an interview with E! Red Carpet, she admitted her phone was in her boot.

The Euphoria star dripped in Cartier and sheer Miu Miu fabric. Nothing beats gothic Hollywood glamour, and she pulled out all the stops.

Cardi B snatched in Versace

Cardi B was golden from head to toe, embellished with the iconic Medusa symbols. Cardi walked alongside Donatella, who was celebrating her 67th birthday.

The king has arrived! Kid Cudi showed up wearing a custom KENZO look designed by friend and creative director NIGO. Cudi’s tailored evening ensemble brought more to the carpet than most under the menswear category.

Brooklyn and Nicola have their first red-carpet appearance after their recent wedding last April 9. Nicola looked like the perfect modern Valentino bride next to Brooklyn’s classic attire. The newlyweds complemented each other seamlessly in minimal designs.

The supermodel takes notes from the latest trends—no bras, no eyebrows. After all, the Met Gala is the best time to experiment. She slipped into a sheer cropped top and a glorious black skirt with a shirring train that filled the steps as she strolled up to the museum.

Johnny made his Met Gala debut wearing a satin suit by Fashion Institute of Technology alum Peter Do. His tailcoat surely fits the theme of the night, but the metallic tip boots and T-bird hairstyle certainly transform the look into a modern-day gentleman.

If there’s anyone that stuck to the dress code, it would be Laura Harrier. The young actress serves Old Hollywood combined with Gibson girl charm. Victor Glemaud has outdone himself, and we’re here for it.

Tessa looked like a spring dream in a 200-meter train of pink tulle, and it’s groundbreaking. Thompson stood out in a room full of silver and gold in a candy-coated gown and thigh-high boots. With slicked-back hair and berry tones for makeup, she is a flower in full bloom.

Unfortunately, our favorite Fashion Killa’s Rihanna, A$AP Rocky and Zendaya were absent this time around, but that means we’ll be expecting a jaw-dropping comeback next year. Nevertheless, the red carpet was stunned with unexpected looks and tributes.

We wanna know your favorite looks, sound off in the comments below!