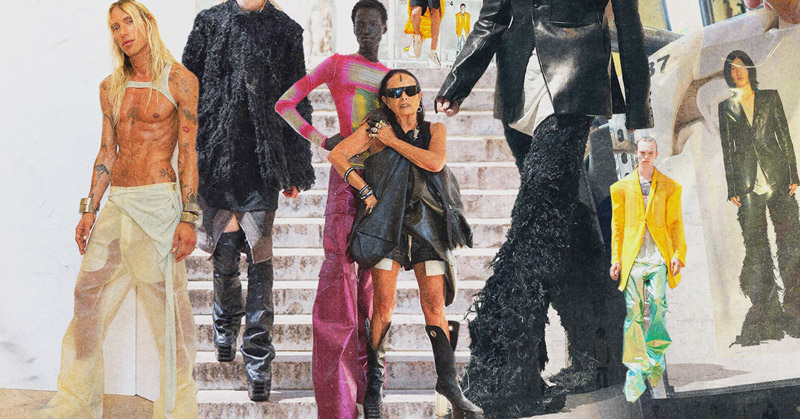 Rick Owens’ “EDFU” is an apocalyptic nightmare dressed like a daydream

I know what you’re thinking—what the hell is Dystopia-core? Don’t worry, we’re all in the same boat. It’s essentially highlighting unconventional garments that give the impression that you’ve walked straight off the sets of Mad Max or Dune. It’s a trend you’ve probably seen around but never got to pinpoint exactly. But thanks to TikTok, we’ve finally figured out what the kids these days refer to it as. But of course, the mastermind who brought it back is the king of dystopian dressing himself: Rick Owens.

It’s a post-apocalyptic aesthetic with a hint of avant-garde futurism, and this year it’s dubbed as the substitute for alternative glamor. After years of pandemic scares and repetitive styles, designers have reinvented the trend game through individualism. The sci-fi trend plays into the world’s current situation, which seems like a doomsday film we can’t seem to shake. Instead of carbon-copy silhouettes, dystopian attire offers character and originality. Much like characters in a film, there’s a distinct difference between each look.

The collection titled EDFU is based on Owens’ trip to Egypt. Known as the location of the Ptolemaic Temple of Horus, Edfu hones stories within its landscapes like the garments of Rick Owens’ collection.

Striking and unexpected, Owens drifted from his usual gray, black and white color palette. The textures and colors take inspiration from iridescent beings and food, such as Amazonian fish skin. Despite the glitz and glamor, Owens investigated the practical side of things, ensuring the materials used are protective.

Jackets are made with Dyneema (the strongest fiber in the world), and head-to-toe tulle wrappings replace mosquito nets. In short, Owens shows us what he actually needed to wear during his trip. The survival aspect of his doomsday attire is present but not complete without signature platform boots and grunge attitudes.

The disheveled trend was made popular by the use of upcycled garments, a movement Gen Z has been enjoying lately. Owens didn’t stray from the positive shift and collaborated with the Parisian label PARADOXE to create a repurposed denim dream come true.

The garments speak volumes about the fear of human extinction and the possibility of judgment day. We all know the end-of-the-world won’t be as chic as this runway, but we can only hope this would be the worst-case scenario. Owens has faith that good always triumphs over evil. Otherwise, we wouldn’t be where we are now.

Speaking of Armageddon, in the middle of Palais de Tokyo was not only a spectacular show, but a flaming metal orb that dropped into a pool of water. It was a collapse of three flaming suns, reiterating the message that destruction and rebirth are a cycle.

Edfu houses one of the best-preserved shrines that has been around for years despite the events that have played out. The walls of the temple still provide important language, myths and religion. A reminder that there is proof of life even after conflict and war. Owen believes that redemption is possible after destruction, as it has happened before over lifetimes.

For a designer that has a knack for decaying aesthetics that make us feel “uncomfortable,” Owens reassures us that things pass eventually. Civilizations get conquered and violence persists, but over time things change for the better. Who would’ve thought a fatalist could convince us that there is liberation in demolition?