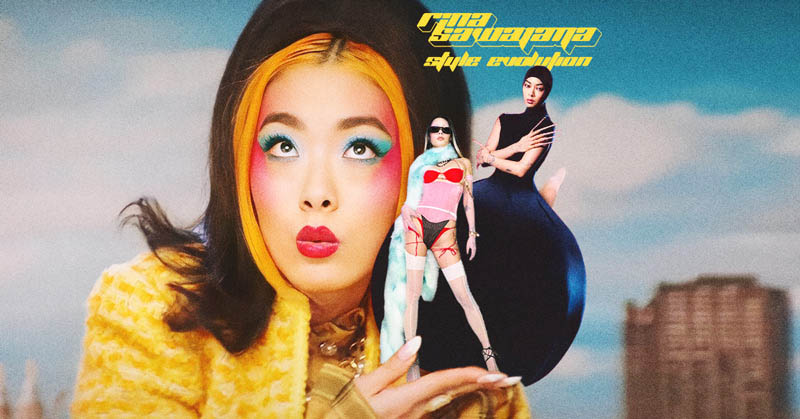 Rina Slaywayama, at your service

While her musical journey has its ups and downs, Rina Sawayama has become a force to be reckoned with. The 32-year-old singer, songwriter and model isn’t afraid to take complicated topics and turn them into addictive pop singles. Whether she wraps her critique on social media with R&B beats and hooks or addresses microaggressors with a nu-metal banger, Rina Sawayama isn’t afraid to experiment and says it like it is.

Perhaps this also pours over to her unapologetic and eclectic style—one that has landed her campaigns with Jourdan Dunn’s Missguided and Versus Versace AW 17 (with Hunter Schafer and Tommy Genesis) as early as 2017. In 2021, she even walked for Balmain in Paris Fashion Week. Plus, can we talk about this amazing look for the Gay Times Honours? *chef’s kiss*

While I could spend hours gushing over her red carpet looks and regular outfits, I’d like to zero in on the looks surrounding her music projects. Each musical era of hers ponders on an important topic that often reflects in her styling choices. So in celebration of the release of her sophomore album, Hold The Girl, we take a look back at Rina Sawayama’s style evolution.

Rina Sawayama’s early work already described what we’ve become: almost always online. Many of her songs that led to her debut EP, Rina, feature commentary on maintaining relationships amid the age of social media. Her early music videos, such as Tunnel Vision, take place in the bedroom, where colorful and youthful loungewear seems like a logical styling choice.

A personal favorite? Where U Are. Her hair and brows are bleached to perfection despite holing up in her room. She chills out in a classic red ringer tee with matching dolphin shorts. But the biggest shocker is her rockstar persona, where red still dominates the color story. She sports a nude bralette, a crimson latex skirt and a burgundy fur coat as she dramatically shreds on the guitar.

RELATED: Is the 2014 Soft Grunge Tumblr Girl Movement Coming Back?

In 2017, after the release of Rina, she turned into a rising force in the creative industry. Rina Sawayama steps back into the spotlight sporting a vibrant orange mane for the music video of Cyber Stockholm Syndrome, beginning her experimental era with more color combinations you can count. Think sheer chiffon pink tops, stacked silver chokers and bedazzled leather tube tops. In addition, the 90s-era R&B song has touches of iconic girl group elements, such as synchronized dances and montages in cars. Sure, silver, purple and orange remain an unusual color combination, but since when did Rina Sawayama let vividly colored hair interfere with her styling choices?

Rina Sawayama slowly forays into sweeter pop with Cherry. The glittering track narrates her explorations with sexual identity, turning it into the bisexual-pansexual anthem. For her Vevo DSCVR performance of Cherry, she dons a deep blue rubber trench coat over a matching bra and flared pants. She completes the outfit with geometric tinted glasses. A perfect touch to her performance? The bisexual lighting.

Leading up to the release of her debut album, SAWAYAMA, with Dirty Hit records, Rina Sawayama slowly matures in terms of style. Still vibrant and somewhat colorful, she adopts an edgier persona that starts with STFU!. But as more music videos get released, the maximalist twists become more apparent in the finer details. In Comme Des Garcons, officewear gets paired with vivid glam such as electric blue eyeshadow. An Homme Girl-esque menswear outfit goes well with perfectly coiffed hair—contrasting against the avant-garde eye makeup. But of course, the main character of the entire era is still her iconic orange e-girl bangs.

In an interview with Pitchfork, the songstress describes her sophomore record, Hold The Girl, as a product of lockdown loneliness, therapy and self-help books. So while her debut record embodied the colorful, maximalist fantasy, Hold The Girl features a monochromatic sartorial wardrobe. Coords, form-fitting dresses and structured pieces populate the photos for the album—her iconic black balloon dress included.

Color only comes in when needed, such as Rina Sawayama’s exploration of red in the country-themed This Hell. Meanwhile, Hold The Girl visibly employs some tans and browns often paired with black and white pieces. Finally, Hurricanes throw us back to early 2000s rock music videos, so there’s not much need for color. Instead, she rocks out in a black-and-white ensemble topped with a leather jacket.

RELATED: The Vans X Sailor Moon Collaboration Is a Big Hit With Otakus and Sneakerheads

But hey, just because Hold The Girl looks the most refined out of her eras, it doesn’t mean she’s fully forgotten about color. After all, she’s still a devout maximalist at heart, if her style prediction video with Cosmopolitan is any indication. For more hints, just check out her outfit for Hold The Girl’s launch party—the ultimate combination of all her eras that flawlessly screams Rina Sawayama.

A brand new era has just begun with the 32-year-old pop star. Needless to say, we can’t wait for what else she plans to play around with soon. In the meantime, we’ll be patiently waiting for her appearance on John Wick: Chapter 4.