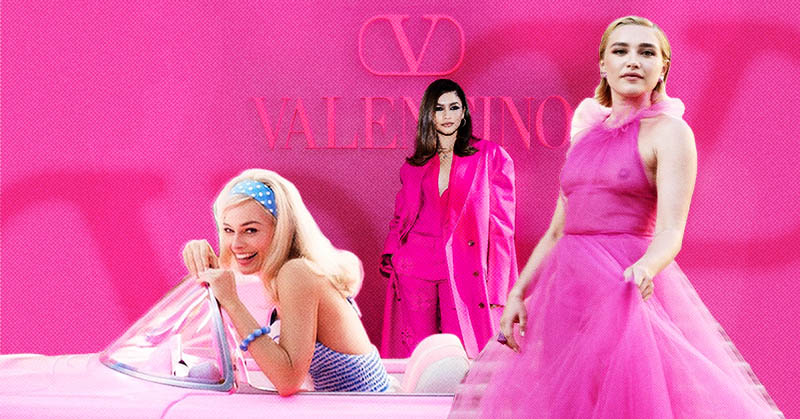 Hot Barbie Summer? For fall? Groundbreaking. Our thoughts on the latest Valentino Fall 2022 Collection ahead

Pierpaolo Piccioli gave us a glimpse of his creative genius through a perfect pink lens during his Fall/Winter 2022 collection titled Pink PP. Suddenly, Valentino’s classic red hue was dyed fuchsia pink, and the world was not ready for it.

The iconic show that has influenced every celebrity stylist has been rumored to take inspiration from the 1957 film Funny Face starring Audrey Hepburn and Fred Astaire. People were quick to notice that the collection seems to have the same spirit as the unforgettable song number, Think Pink!. The film is not only an homage to fashion and film but has been referenced multiple times since its release. Whether or not this is true, Piccioli’s sartorial disruption is the game changer we’ve all been waiting for.

Potent. Experimental. Radical. The monochromatic runway showcased 81 looks stripped down to a single hue to emphasize the construction of the garments and the diversity of the models. It’s minimalism dipped in a pink dream.

Known as the color of love, community, energy and freedom, the master Italian couturier intensifies our senses to form a moment of reflection in a hustling bustling world. It’s subtraction and amplification in one, magnifying the garments and the humans.

RELATED: Met Gala 2022: A Return to Regency and Opulence, Escorted by the Original Upper East Siders

Piccioli’s work has always revolved around the celebration of individuality. In essence, his monochromatic uniform draws attention to the character of the individual wearing the clothes. His creative direction is a pink manifestation with occasional black and white intervals to reiterate his message. Valentino also exclusively developed Pink PP with Pantone to reserve their unified palette. As we know, color is never official unless Pantone says so!

The monotoned ready-to-wear collection has been sported by countless celebrities on the red carpet, from Anne Hathaway to Sebastian Stan. And we can’t forget Valentino’s favorite muse at the moment, the legendary Zendaya. But of course, this queen looks good in everything.

Speaking of royals, pink was selected over the signature Valentino red as a rebellious act to counter associations with the hue. Whether it’s to break down gender history or represent male rankings in the renaissance era, the collection highlights the liberation of dressing. All walks of life can choose to wear the fuchsia-forward attire to feel seen.

Florence Pugh’s recent #freethenipple rant is the perfect representation of Piccioli’s theme—to be a bona fide human. And what’s more human than an anatomical gesture? Although the tulle gown is part of the couture collection, it still embodies the same pink energy as the show prior.

Unfortunately, the Oscar-nominated actress had to defend herself against critics shaming her for the ultra-sheer surprise. Pugh’s stunning moment was showered with unexpected negative comments but countered with a ton of support from fellow actors, and Piccioli himself commented, “Respect <3.”

Needless to say, we can’t end this discussion without leaning into the newfound #Barbiecore trend inspired by the upcoming Barbie movie starring Margot Robbie and Ryan Gosling. It just so happened that the stars aligned when this collection fell perfectly into place as the highly anticipated film. Greta Gerwig’s live-action version is set to be released on July 21, 2023, but it seems like the blonde bombshell trend is going to be here for a while.

Valentino’s pink-out color strategy is a never-ending story filled with one interpretation after another. But I guess that’s the highlighter effect! Highlight the whole page, and suddenly you can read between the lines.

RELATED: Why Kim K’s Unique Met Gala Dress Has Historians In A Twist