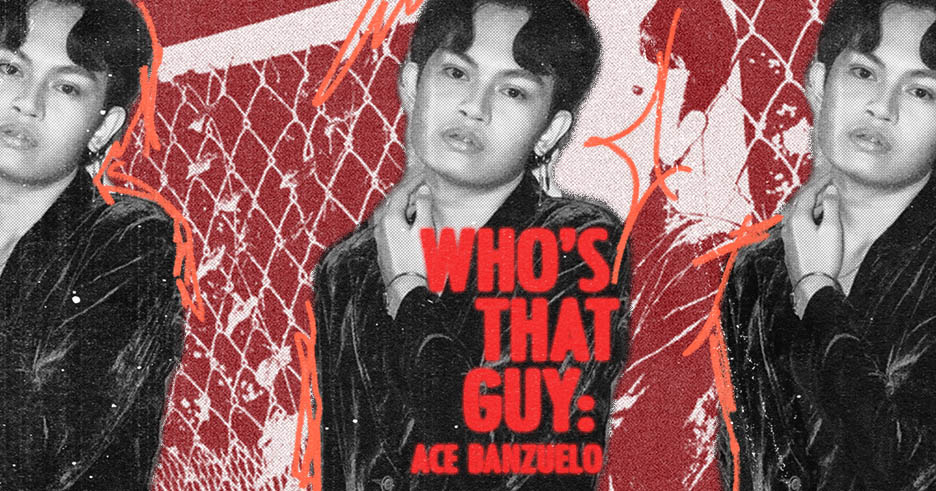 We get up close and personal with Ace Banzuelo

In Wonder’s previous roundup of young Filipino talents to watch out for, we closed the list with Ace Banzuelo. With his multi-layered masterpieces weaned on retro synths, arena-worthy production and lyrics written to hurt, the artist continues to establish himself in the local music scene. But after having a few minutes with Ace Banzuelo one afternoon, we learned that this singer breathes art. He sees his craft as one that overlaps in different disciplines, may it be the production side of his music or the visuals meant to deliver his message, and even down to the all-out performances he brings each time.

What started for this penchant for different art forms began when his parents noticed four-year-old Ace grabbing the microphone from hosts and clowns at parties. This grew to him performing at weddings, not to mention joining auditions and talent shows to further show his prowess. While he didn’t always win, Ace described those as “[a] fun experience, because often times hindi naman panalo (I didn’t win) or what, but there’s this learning curve to it as a performer and as a contestant as well.” Interests in music production and poetry further established his base as both a singer and a songwriter. All his efforts paid off when he joined a local songwriting competition in Laguna, where he won first place. Fast forward to the present, a little over three years after signing with Sony Music, Ace continues to make music magic with his dreamlike songs.

Ahead, we get to know the Musical Magician Ace Banzuelo better.

RELATED: We speak with Kristian Rivera, founder of “The Spectrum”

Wonder: You’re a self-taught singer, songwriter and producer. Can you walk us through your early beginnings with music? What pushed you to pursue music full-time?

Ace Banzuelo: It was always out of fun. I make music because I love music. On the music production side, I was so into DJ-ing and EDM; Skrillex, Zedd and Avicii made me so curious about music production. At the age of 12, that’s when I started [learning] informally, with no direction or anything, just out of curiosity. I replicated and remade songs. So there’s this electronic side already, which you already hear in my music right now. In this part of my musical journey, as a producer and songwriter, I would combine [those] because I was into poetry and public speaking. All these things na napagsasama-sama mo sa dulo (that you get to combine at the end).

Later on, I joined this local songwriting competition in Laguna, and I eventually won as champion. I was super thankful because, at that point, I became open to releasing music from my bedroom when I was 16 or 17. I started to sign up for small gigs and local productions in Manila. So I went around small bars, local events, fundraisers and schools. Eventually, what pushed me to pursue music full-time was [a time] before the pandemic. I said, “I really want to do music.” At that time, I didn’t apply for a music school. But I was really okay with it because I’m [also] a multimedia artist. That was my experience not only as a musician but as an artist because my art is transdisciplinary, and I apply it all the time. Right now, I see it as what pushed me to pursue art.

W: You just signed to Sony Music in 2019—do you recall the moment that you got the news? What did you feel?

AB: At that time, I was super excited, but I also had a lot of questions. I was very new to the music industry, because my experience in entertainment before was very different from what I experience now. I’m very happy with everything because I’m allowed to take [the] lead in my art, music and all of that.

W: We could use a lot of adjectives to describe your music—magical being one of them—but we want to hear it from you. How would Ace Banzuelo describe his own sound?

AB: I think that’s the world: magical. But for me, my intention when I make music is I want people to enter a different place. It becomes this very dreamy state—that’s the Ace Banzuelo Sound™.

W: Who were the acts that influenced your current sonic style?

AB: When it comes to production, songwriting and arrangement, I’m influenced by a lot of bands like Linkin Park, The 1975, Phoenix and Daft Punk. But when it comes to performing them live, I’m very inspired by The Jackson 5 and all these other Asian artists.

W: Let’s talk about your newest song, Walang Himala. In a press release, you mentioned that the song emphasizes betrayal and even serves as the opposite of your earlier release, Himala. Can you tell us the story behind it and why reference one of your previous singles?

AB: I think I really wanted to tell a story. I’m so into this [concept] of having a sequel of songs. I’ve been doing it since Tala and Mayari, so I thought, “I want to put out what comes after Himala,” and it’s Walang Himala. It’s like the opposite or the antithesis of Himala itself. There are a lot of similarities to these songs in terms of arrangement and lyrics. Both songs have lyrics that start with “walang” and end with a verse. So that’s the technical aspect.

When it comes to the story, it talks about the betrayal and disappointment of you, as a person, who viewed someone else as your “himala (miracle).” Instead of a personal experience, it’s like a shared ending to multiple things.

W: Speaking of Walang Himala, the credits name you as the writer, performer and producer, and you took care of mixing and mastering. Plus, you conceptualized the visualizer that just dropped. Why are you very hands-on with your art? Does this come naturally?

AB: I think when it comes to being natural with my music, everything is done with intention and it becomes much more personal. As an artist, everything happens for a reason: why it’s mixed like this, why it’s mastered like that and why the production style is like this. I have all the reasons in my head na mare-realize ng mga listeners (that my listeners will realize), so there’s this transdisciplinary part to my art that I apply every time. Since I’m very open to collaboration and other things naman (still), there are these core elements that I still apply with everything.

W: Do you have any dream collaborations in mind?

AB: I’m interested in the local hip-hop scene, especially coming from Muli. It’s a synth ballad underneath this trap beat. There’s a lot to local hip-hop right now after witnessing the growth in the digital streaming age. And for artists, I want to collaborate with Al James.

W: This August, Wonder highlights the importance of balance in our lives. Outside of writing and performing, what do you usually do? How do you strike a balance between work and play?

AB: Before finding a balance between work and play, I’m trying to realize that my work is not actually work. I don’t treat it as work because [I’m] having fun. I love what I do. I love music, so that’s what I remind myself of first before I find that balance when it feels like it’s becoming work. People get that. But what I usually do, I go outside and do my thing. I workout, skate, dance and read stuff.

RELATED: 9 Must-See Concerts and Music Festivals in the Philippines This 2022

If anything, Ace Banzuelo tells us the truth behind the magic behind flourishing: hard work and expanding your list of experiences. Remaining relentless in your pursuit will definitely pay off one way or another.