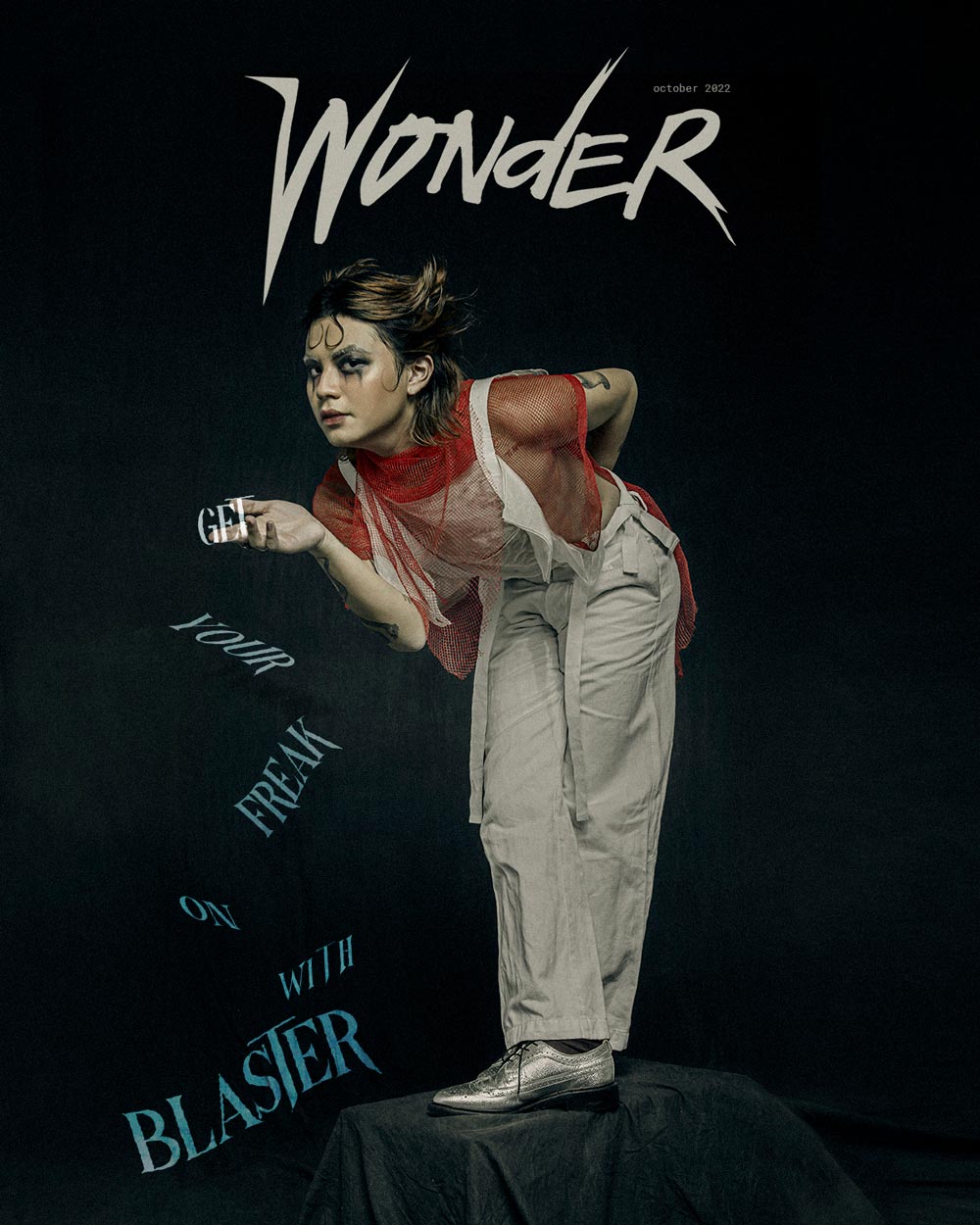 Blaster Silonga: Get Your Freak On

When we were young, we were taught to play nice. Our parents, teachers, grandparents, aunts and uncles all taught us the same thing: Get along with people, and keep your head low. We were taught not to make noise, to stay out of trouble and to be satisfied with just existing. And all these instructions taught us to fear the weird. So we kept quiet on the things that made us stand out, and consciously hid our freakier sides away from prying eyes.

But we grow up and we learn. And since our individual bouts with puberty, we’ve (hopefully) taken to heart that there is reason to celebrate who we are—everyone else’s opinion be damned. 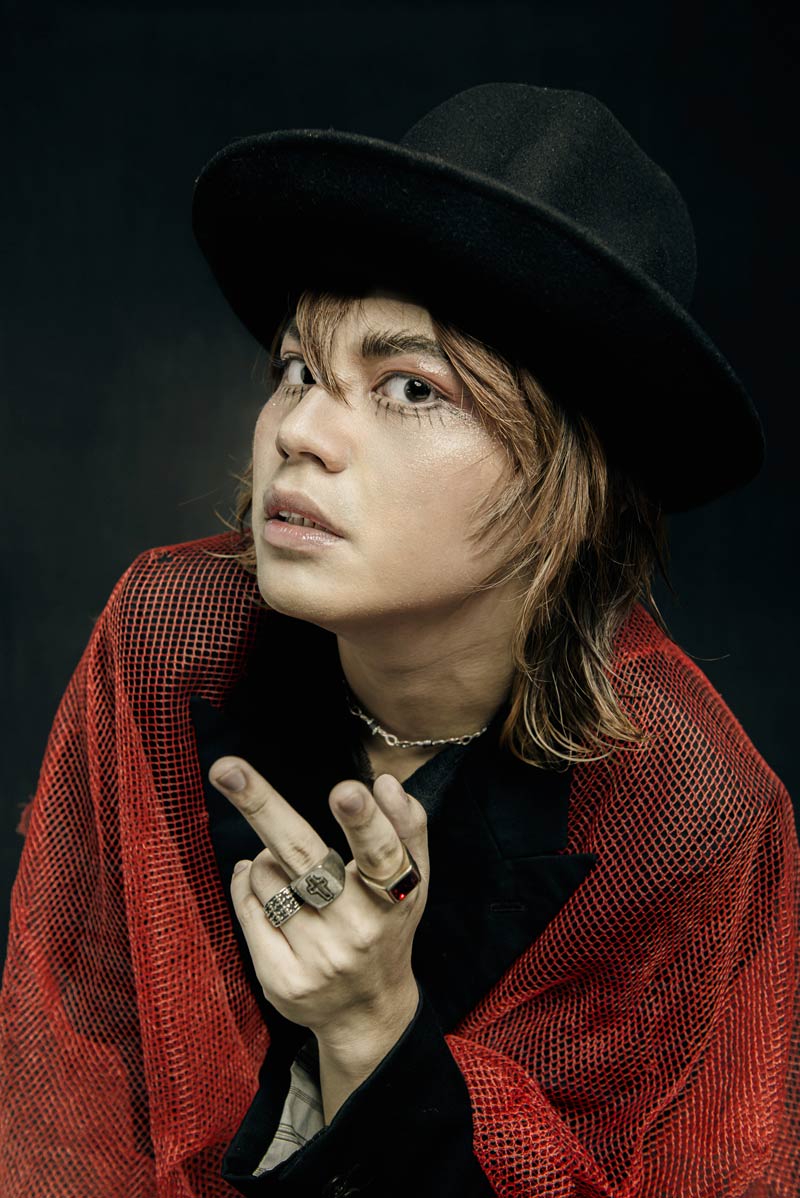 This month, Blaster Silonga is reveling in the release of his debut solo album, My Kosmik Island Disk. And as we learned from the 23-year-old, there is no better way to flip off the world than to create something that is so incredibly your own.

After years of prioritizing everyone else’s opinions, Blaster Silonga is finally (and rightfully) front and center. And just to drive the point further: did you know that the album was originally called Kosmik Island Disk, but he added “My” in there because—that’s right—this is about him. 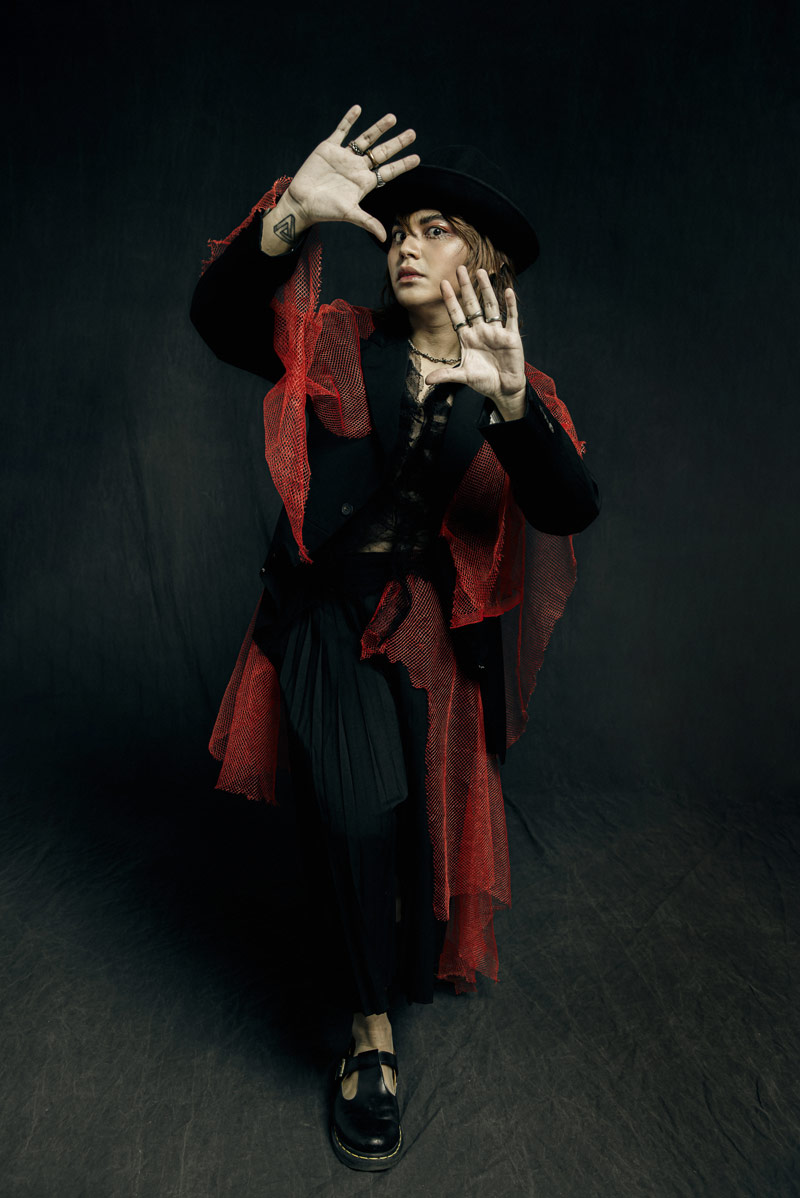 Bench oversized hat, Lanvin lace blouse, Comme des Garcons Homme asymmetrical cutout jacket, Dr. Martens shoes, Stylists’ own pleated shorts
My Kosmik Island Disk is a product of a long, long lockdown and Blaster’s corresponding boredom. “That was one of the reasons that I started making an album,” he shares. “Because I [had] nothing to do.”
But if we’re talking about the specifics, Blaster got his inspiration from BBC Radio’s Desert Island Discs, a radio program where personalities share eight essential tracks they’d bring to a deserted island. For the musician, his album contains creations he’d take in the event he gets lost in the cosmos, a decision that he traces back to his interest in astronomy. And honestly, the hints were all there: from the otherworldly vision of Disko Forever to the album’s name, all the way down to his band, The Celestial Klowns. 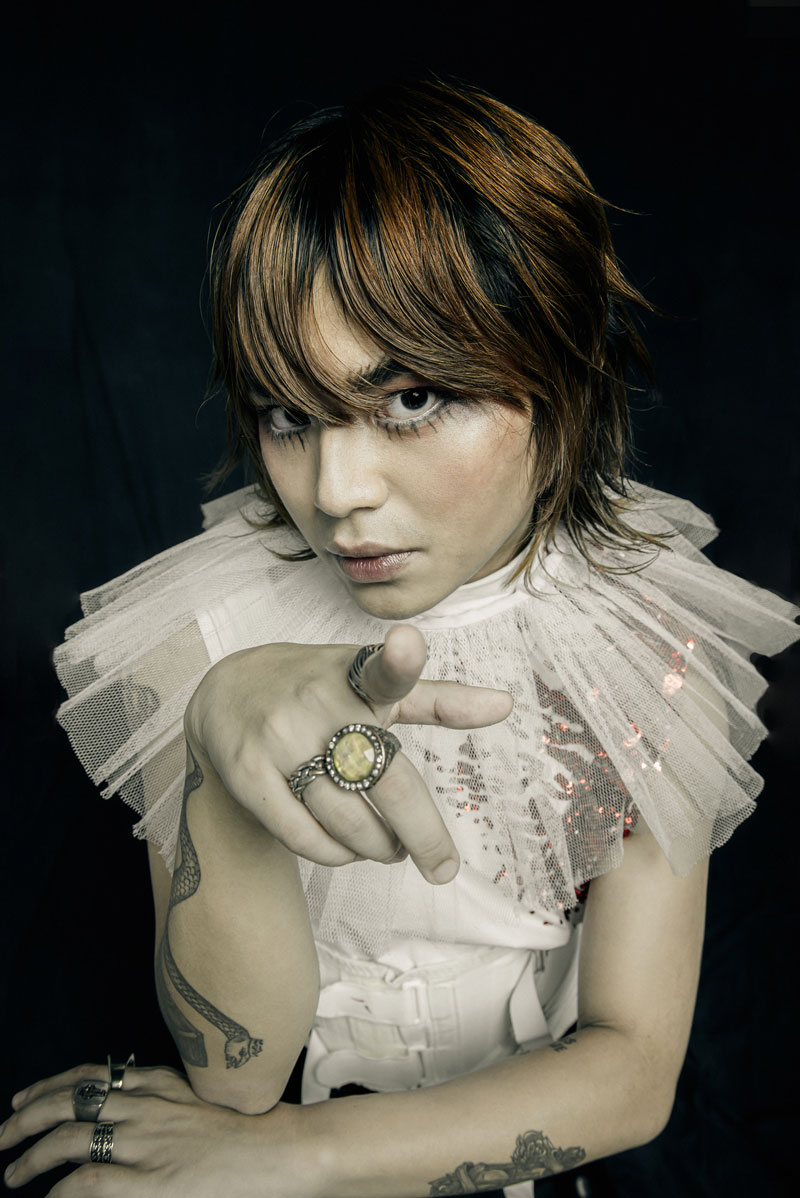 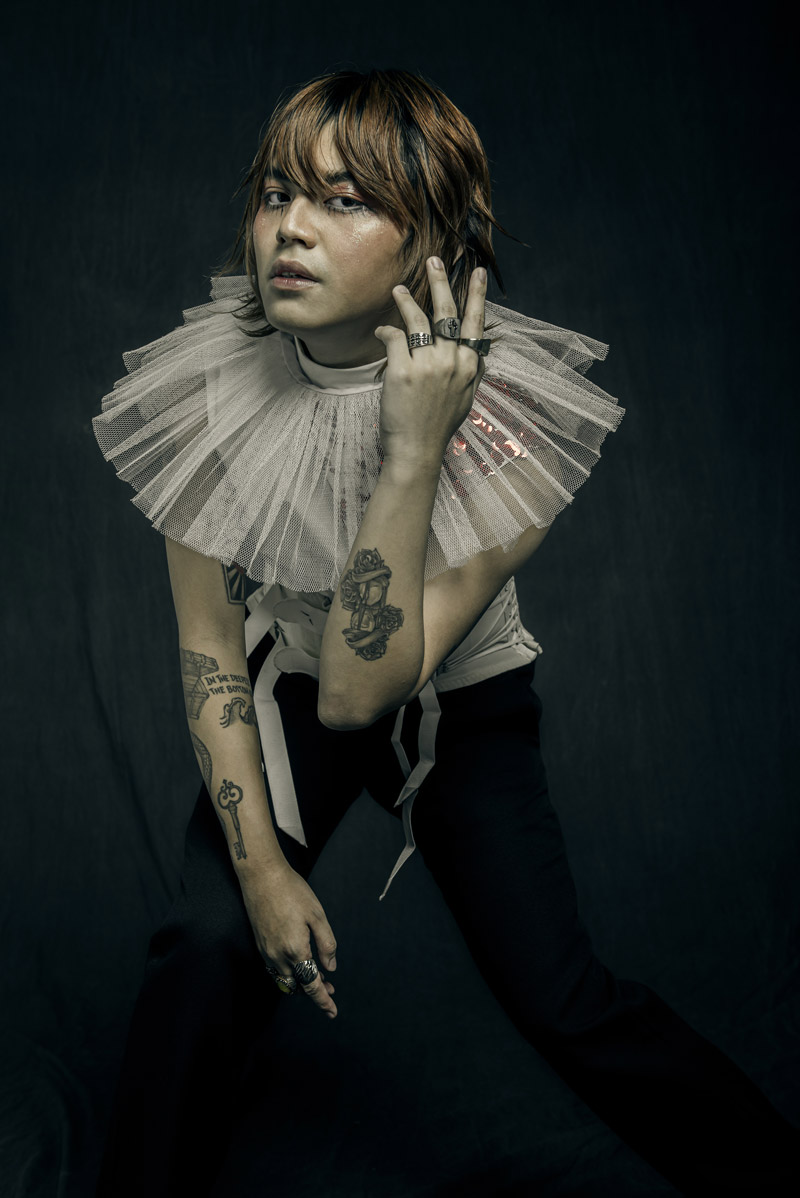 My Kosmik Island Disk opens with Armonya, a two-minute instrumental that seamlessly bleeds into O Kay Ganda. Inspired by one of his habitual walks, Blaster imagines himself traveling outer space all alone, where no soul can bother him and vice versa. As he sings “Walang Pagsisilbihan / Walang paligid na papansin / Lahat ay pwede ko nang gawin (No one to serve / No surroundings to mind / I can do anything now),” the singer makes a spectacle out of solitude. Left to his own devices, Blaster dreams.
But allow us to argue: who needs to get lost in space to do their own thing and be unconventional? Most especially as he’s already doing it now. That is, Blaster Silonga is embracing a brand new sound and marching to the beat of his own drum. 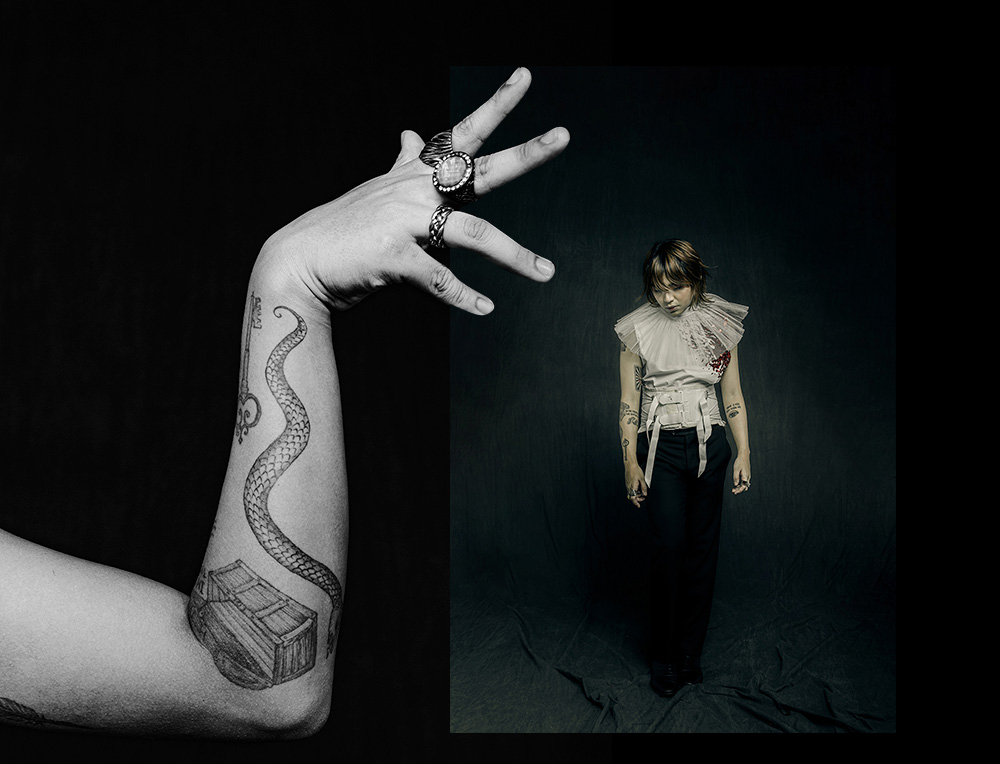 Taking cues from David Bowie, The Strokes, Radiohead and J-rock acts (if his playlist of classic anime bops during our cover shoot was any indication), Blaster steps into the world of disco, alternative rock and psychedelic pop. Think warped guitar riffs and fuzzy effects on vocals and embellishments while keeping Blaster’s Kosmik Dream at the center of each creation.

My Kosmik Island Disk includes “Prelude” In Eb Major, a piano-led instrumental accentuated by theremin sounds to mimic transmissions from space before transitioning to Magunaw Man Ang Mundo. It’s at this point of the record that you know that the singer has effectively created his own intergalactic space.

Blaster may have had the help of The Celestial Klowns in creating the album, but there still exists a difference between creating in a band and creating something on your own: the increase in responsibility. “Now, when [I’m] alone, I need to think of the heart of the song,” he explains. “I need to build around the main idea and just turn it into my work.” But this doesn’t stop him from shooting for the stars.

When asked about the thought that runs through his mind when he’s in a session, he replies, “I always want to do something that’s never been done before. When I write a song, I try to outdo my last work.” This brings Blaster and his band to record things in different ways, may it be vocals, guitar riffs or drums, and see where each possibility takes them. 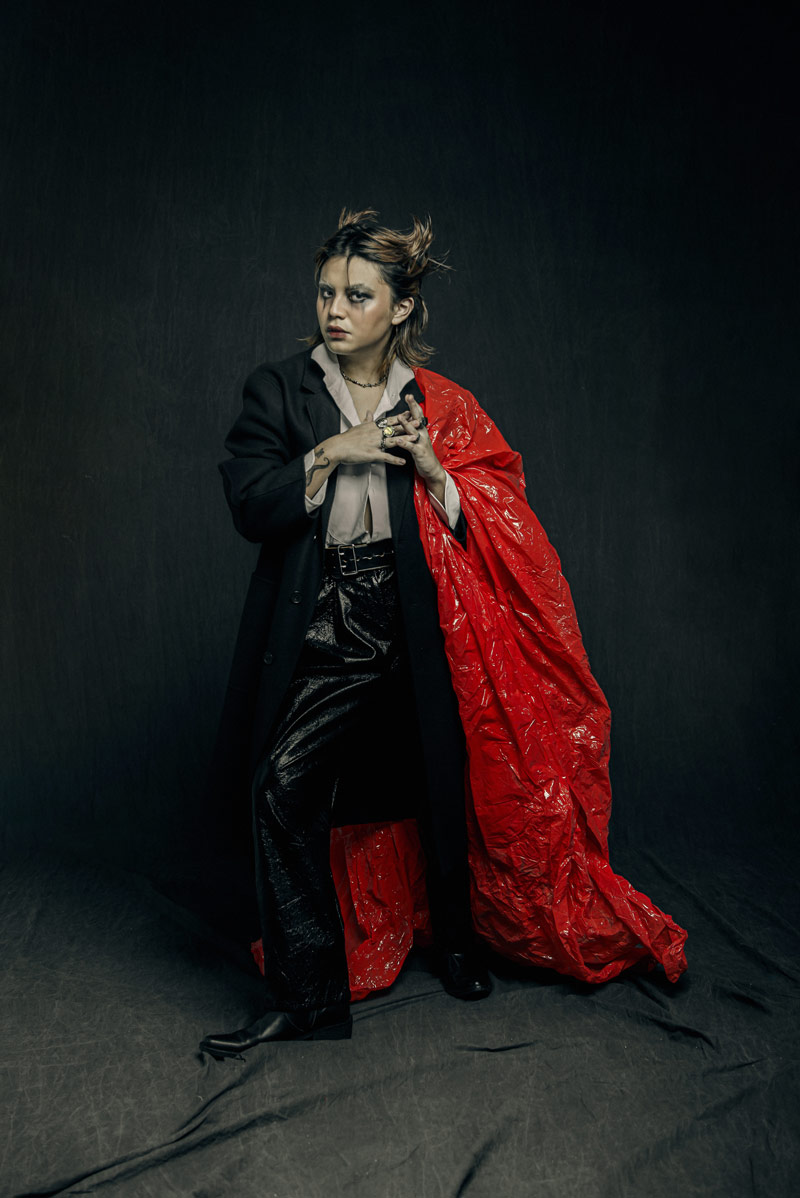 With his first solo project serving as a clean slate, many would expect an ambitious show of skill and talent for a lasting impression. Instead, Blaster and his band wrote, recorded and created for themselves, an act he describes as “selfish.”

“When we were making the album, we weren’t thinking about other people or pleasing them,” recounts Blaster. “Our main priority is to satisfy our own ears—that’s the most selfish thing about this album.” In effect, My Kosmik Island Disk celebrates Blaster’s own special existence, his worthier re-introduction into the scene. “Most of the songs are really based on my personal experiences,” he explains. “It’s a celebration of myself.”

Much like all of us, Blaster has also experienced shrinking himself to fit a certain box, careful of others’ opinions about who he is. “I wasn’t really honest. I [tried] to please other people by changing the way I talk, the way I look and my personality depending on the people around me,” he reveals. “But now, kahit saan ako mapunta, ito na yun (Wherever I go, this is who I am),” proclaims Blaster, proudly. He no longer tries to tone himself down. “Kung kausap ko nanay ko, yung presidente ng buong mundo, yung naglalako ng taho, si Mayor—kahit sino (Whether I’m talking to my mom, the president of the whole world, the taho vendor, the mayor, whoever).” 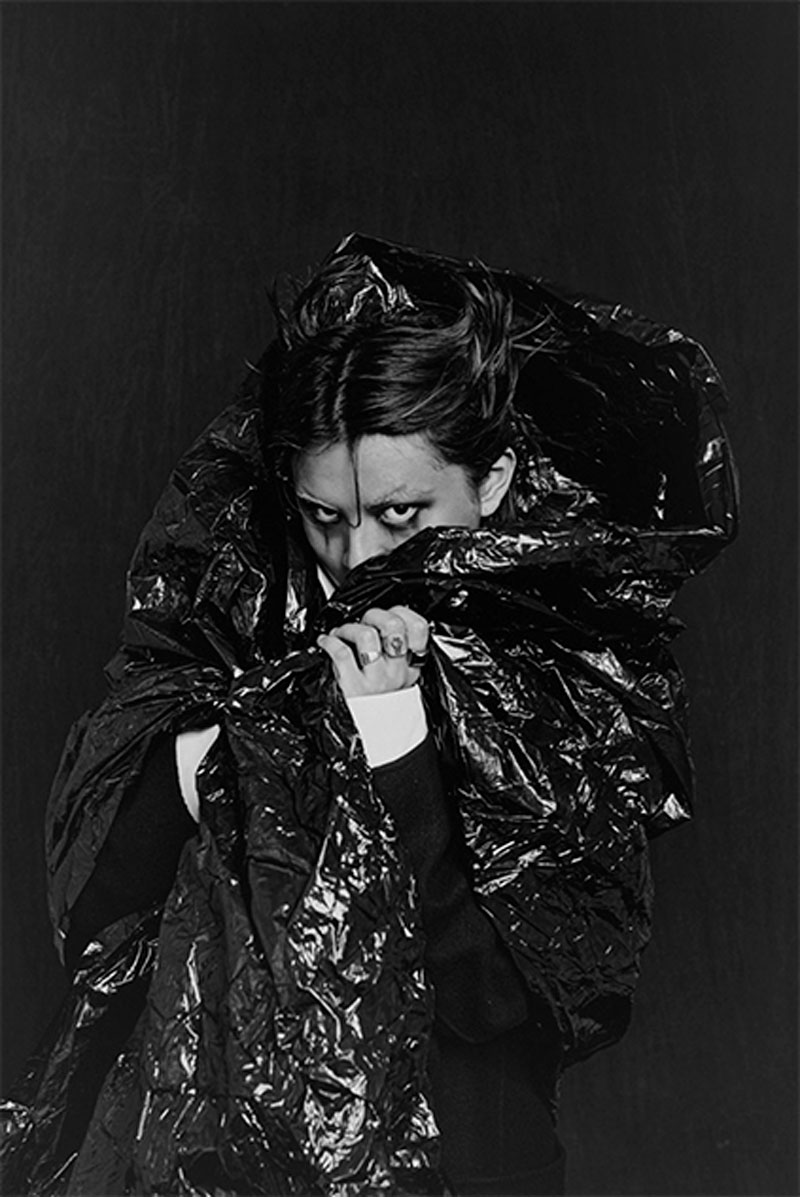 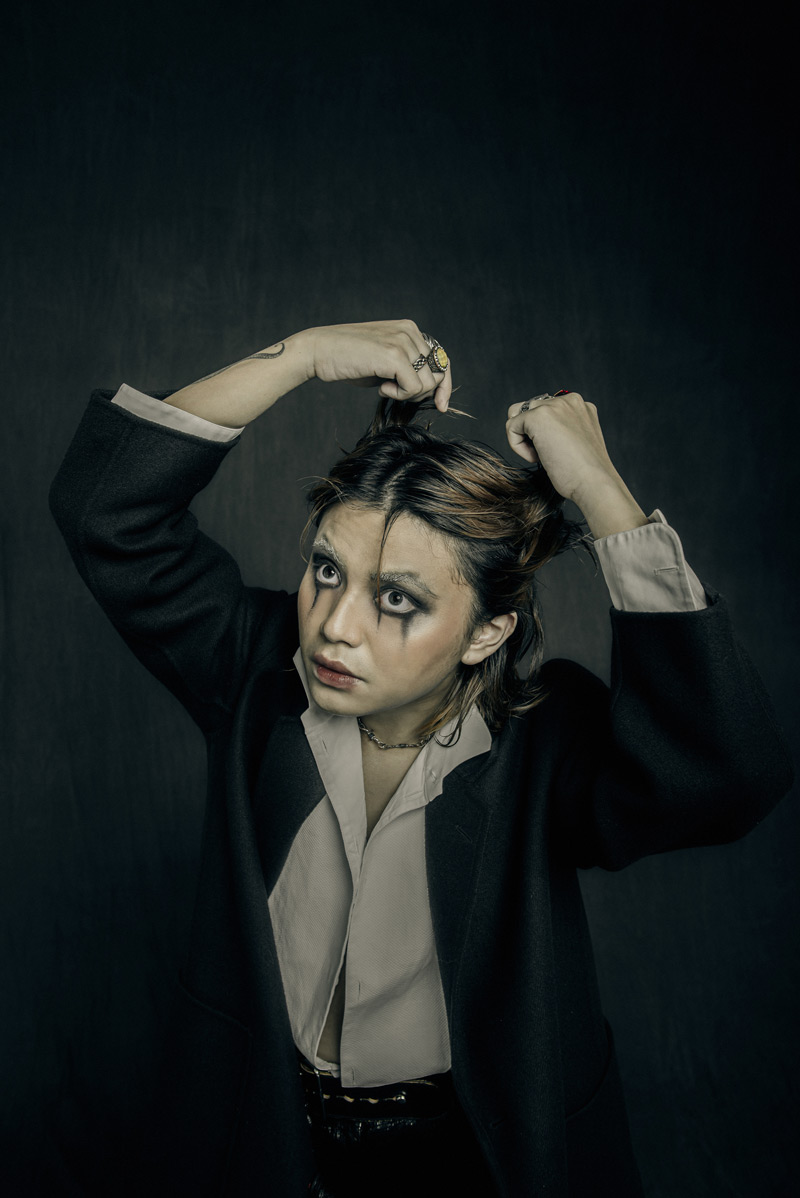 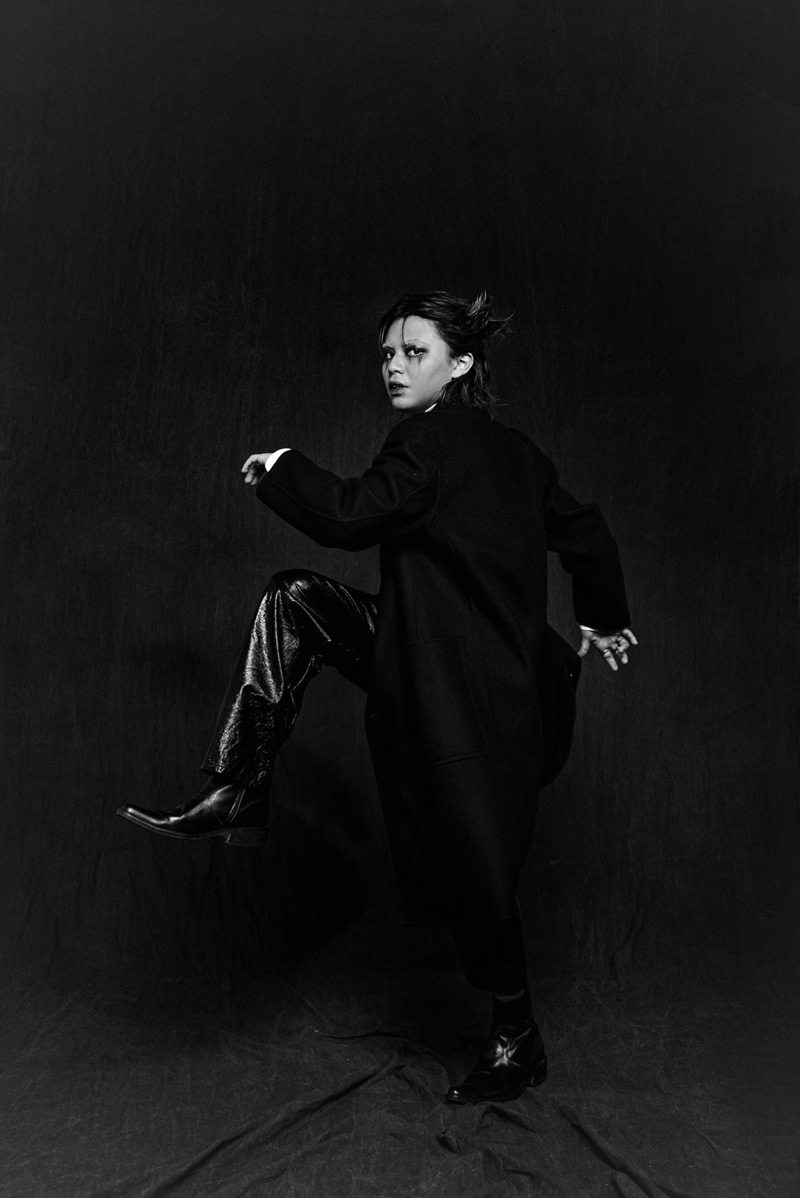 It was 10 years ago when he first started to play the guitar, and he knows looking back that things could have gone differently. “My advice [to myself] would be to relax; don’t think about what other people say,” he shares. “Just do what you love. Do things that will make you happy. Practice.”

It’s refreshing to see him keep things this simple (at least in words). Because as we wound down our conversation, it became clear that Blaster is not the same person we met years ago. With a pandemic between then and now, it was a breathable chunk of cosmic air to see that he has come into his own.

His music speaks for itself, but Blaster is no longer limited to that baby-faced guitarist we first met. He didn’t just sit on his makeup chair, he was ready with pegs he wanted us to consider (and gladly ran with). He didn’t just stand in front of the camera, he bloomed in front of it. He looked at our concept and turned it into his own. He is his own.

“I don’t really think about all the people who are gonna hate on this album,” shares Blaster. “Because the most important thing for me is [that] I love it. 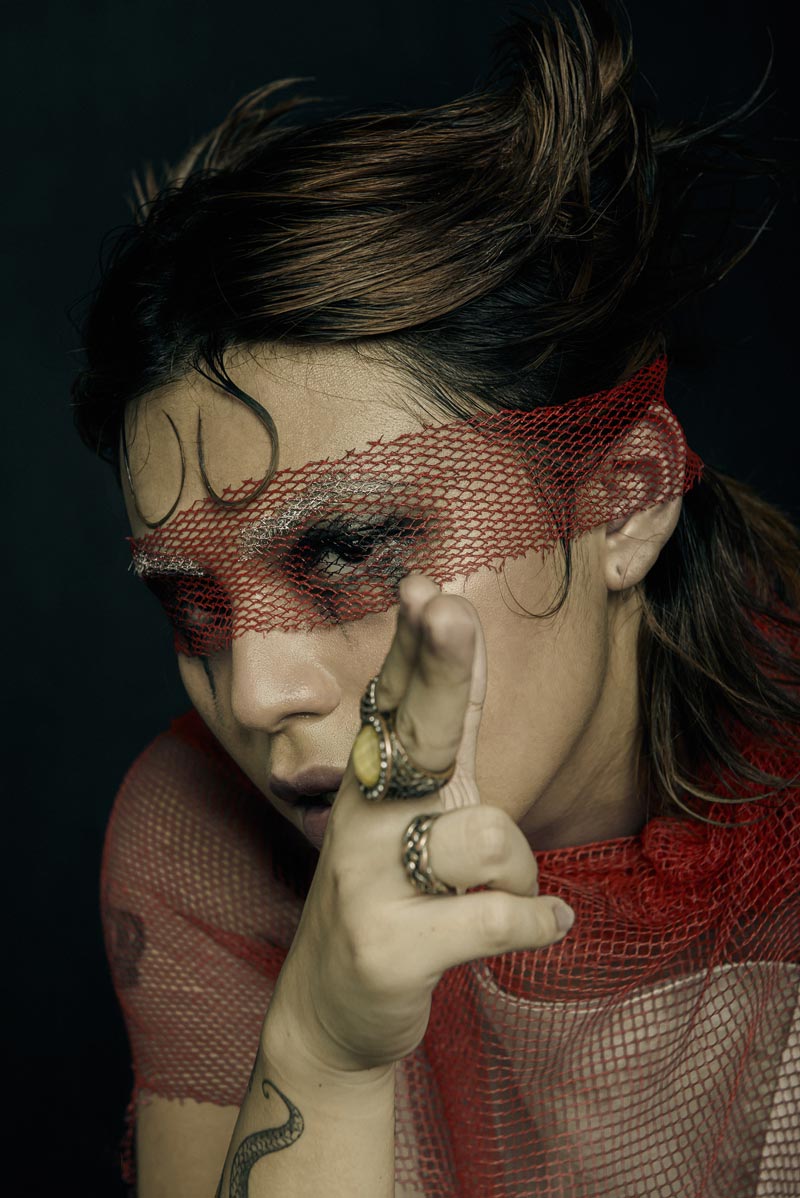 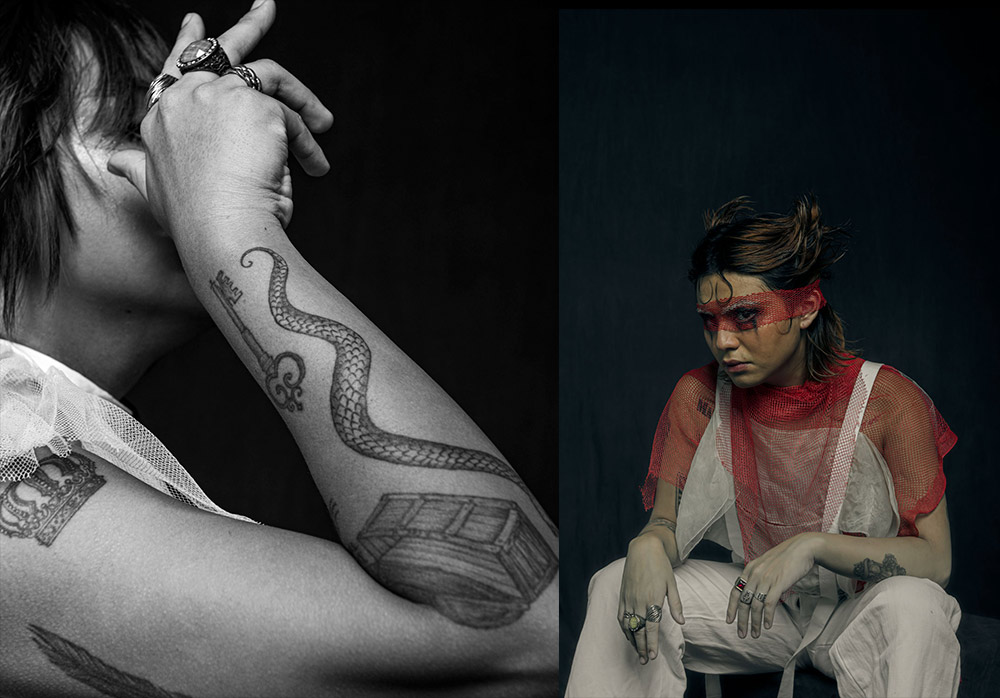 As of now, there isn’t one thing that Blaster would like to change—except, of course, the state of the pandemic. “No more pandemics…Wag na sumingit yung monkeypox (Monkeypox shouldn’t follow),” he laughs. “One thing lang siguro. I don’t want to change anything naman.”

And why would he want to change anything? He’s making his own music, wearing what he wants to wear, being who he wants to be. It’s something we wish for everyone. But does this satisfaction and state of mind mean there’s nothing more we can expect from the artist?

“[Sasabihin] ko sana (I was supposed to say), ‘expect the unexpected.’ Pero pag inexpect mo na siya, expected na siya (But if you expect it, then it becomes expected),” he says as we ask about what’s next. He finishes, laughing at his own humor, “So, unexpect the expected.” 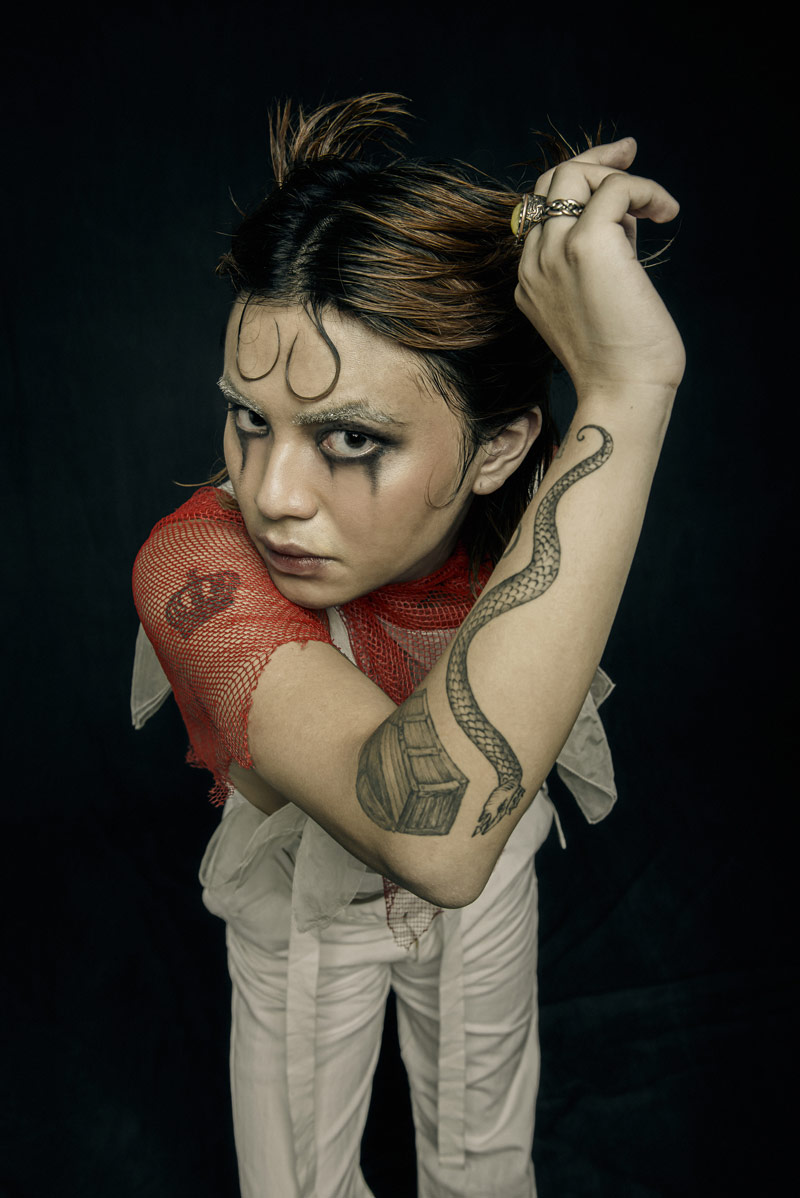 In NARARARARAMDAMAN, Blaster Silonga sings: “Malay mo, sa atin ang bukas (You never know, tomorrow could be ours).” It’s his favorite lyric in the entire My Kosmik Island Disk album, and its music video alone is an ode to the journey of getting our freak on—of letting our Freak Flags fly. It starts with the protagonist being controlled by puppet strings, until he can’t take it anymore and literally rips them away from him. The end is what you make it, but we think it looks a lot like freedom.

As the rest of the song goes, “madami pang bukas (there are plenty of tomorrows).” But why wait, and spend those tomorrows as someone less than you are? Why not explore a silenced side of you? You never know, you might meet someone you’ll want to put front and center, and celebrate, too.

Bring them along, and wave your flag. We’ll see you at the party.

“We Never Fight” and Other Overlooked Relationship Red Flags

Special thanks to UMG Philippines Inc. and Island Records