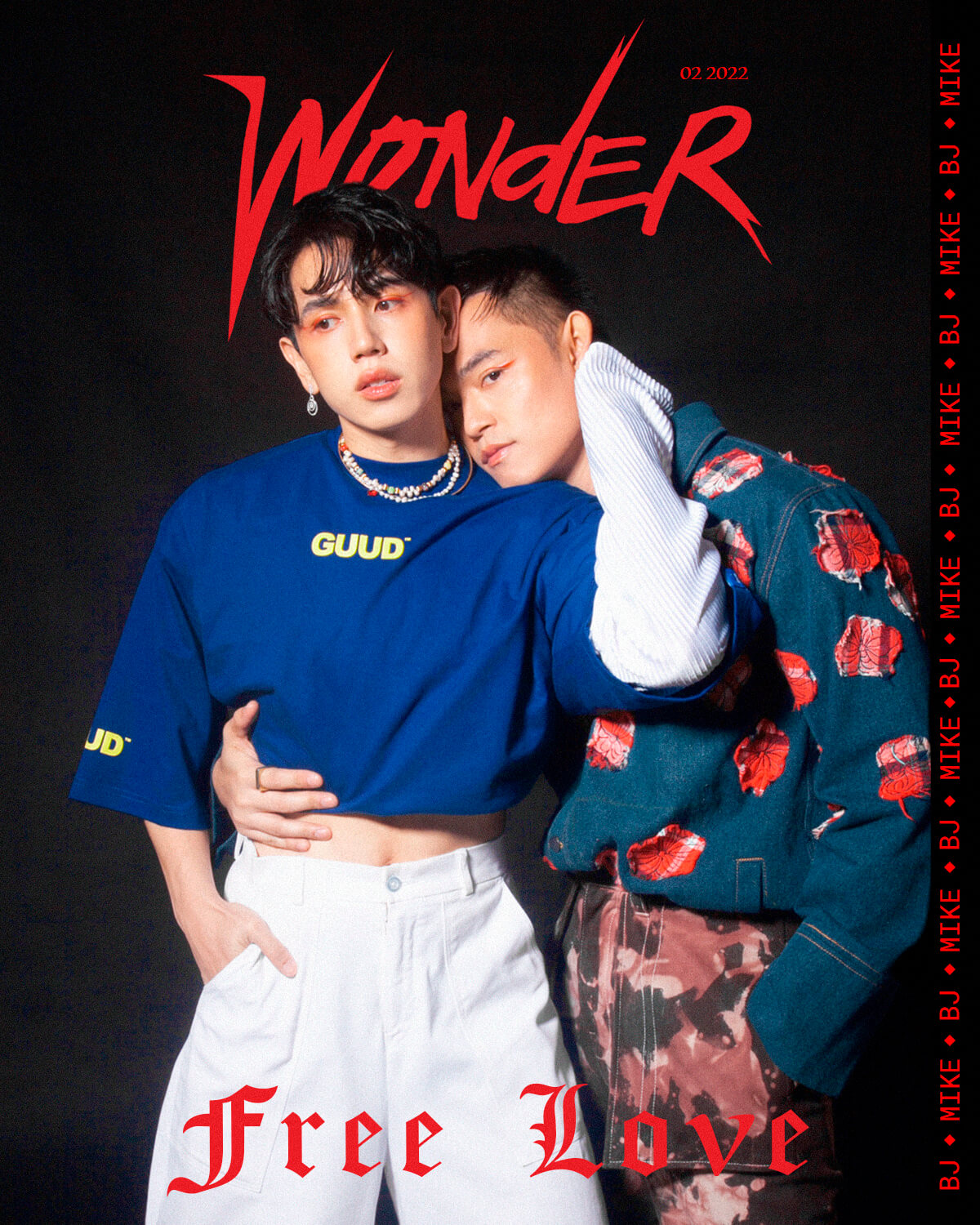 When we’re kids, We’re not taught about free love. Instead, we’re taught to plan ahead, to try and foresee what lies beyond one corner versus another. We know not to touch a pot on the stove because it will give us pain; we’re pressured into choosing our careers before we can legally drink. We put on our seatbelts to keep us safe from the things we can’t control, and we wear masks on our faces to try and avoid the unseen.

From the moment we can make our own decisions, we are challenged to think ahead—and it’s a lesson that’s been painful to learn, and sometimes almost impossible to bounce back from. But we come across people and situations and relationships in our lives that empower us to do just that: to come back stronger than we ever dreamed was possible. And such is the case for BJ Pascual, Mike Lavarez and their free love that frees them. 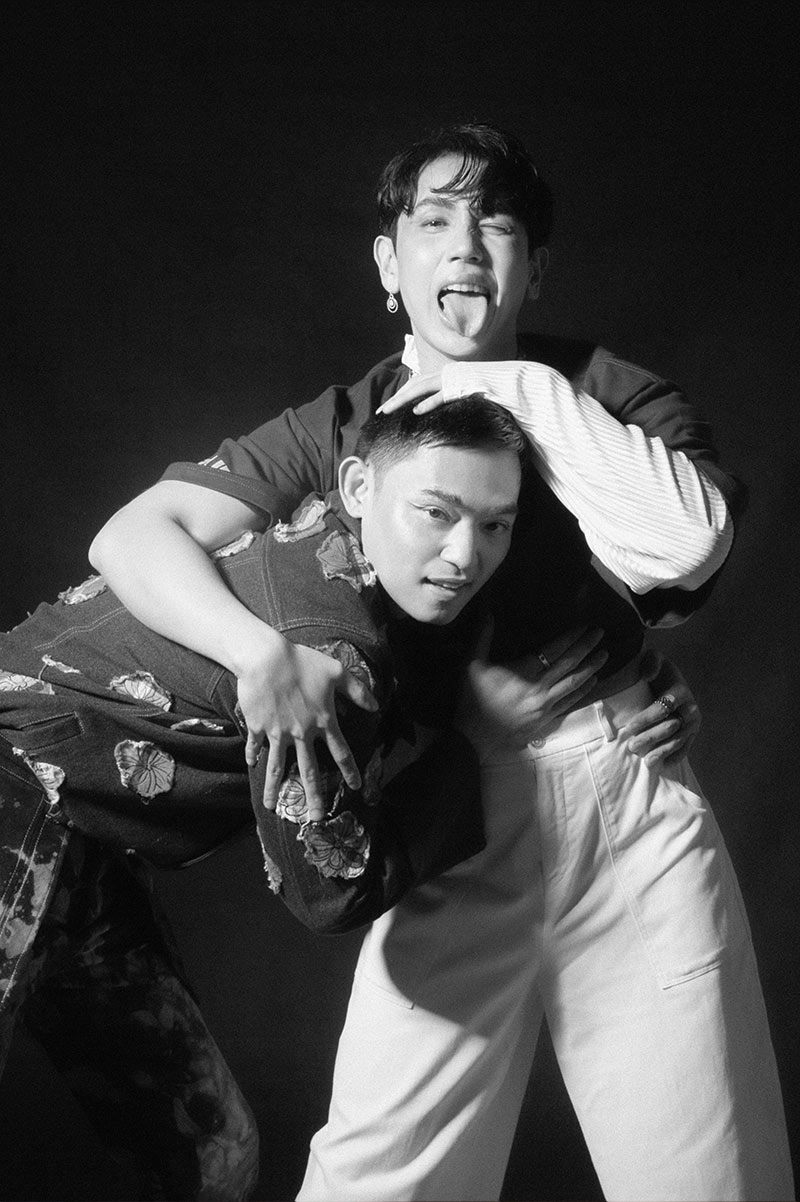 The Start Of Something New​

It’s been five years since BJ and Mike first made things official, but it was a long journey to get to that first date.

Mike admits that he first thought BJ was “super high maintenance” and “suplado (a snob).” And while BJ openly declares that he was the first to crush on the other, he also shares that he thought Mike was “masungit (standoffish)” and “intimidating”—not that it ever stopped him from coyly inviting Mike to his birthday parties.

But then it was BJ that got an invitation to be a guest DJ at the first-ever Poison Wednesdays, of which Mike was part of the group that set it up. “Yung gabi nun, parang nagpapatulong ako sa playlist eh ine-next next mo lang naman yun. Kunwari, ‘Paano toh?’ (That night, I asked for help with my playlist, but you would just press ‘next’ anyway. I’d pretend, ‘How do you do this?’),” recalls BJ.

They ended the night (or early morning) with what they proudly consider their first date: breakfast at Goto Monster.

The Long And Winding Road

During the Friday afternoon that marked our cover shoot, it was clear that BJ and Mike glow every time they’re together. They’re constantly taking photos, constantly laughing, constantly holding each other in-between moments. These two stand strong on their own, but there’s a different air when they’re within each other’s reach. Though we can’t say they’re poster boys for a Hallmark card, either.

BJ, after all, prefers to have his space after an argument, and Mike likes to talk things through directly. And before they got together, BJ was reeling from a less-than-ideal long-term relationship. They had to learn how to be with each other in order to actually be there for each other, in order to work within a balance that benefits both of them without sacrificing too much of themselves in the process.

They’ve had their fair share of arguments—including one that pushed BJ to permanently damage a wall in his home—and they’ve only gotten stronger because of those instances. And all these things don’t even include society’s view of their relationship. 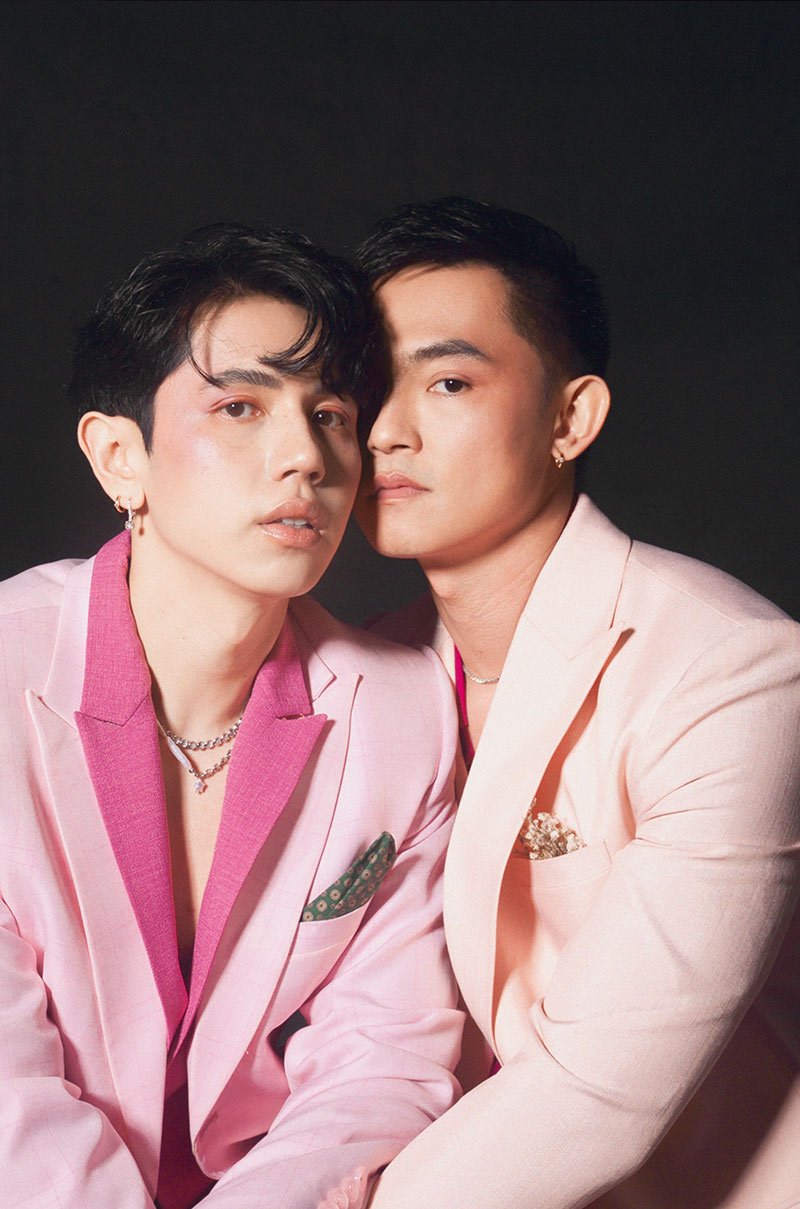 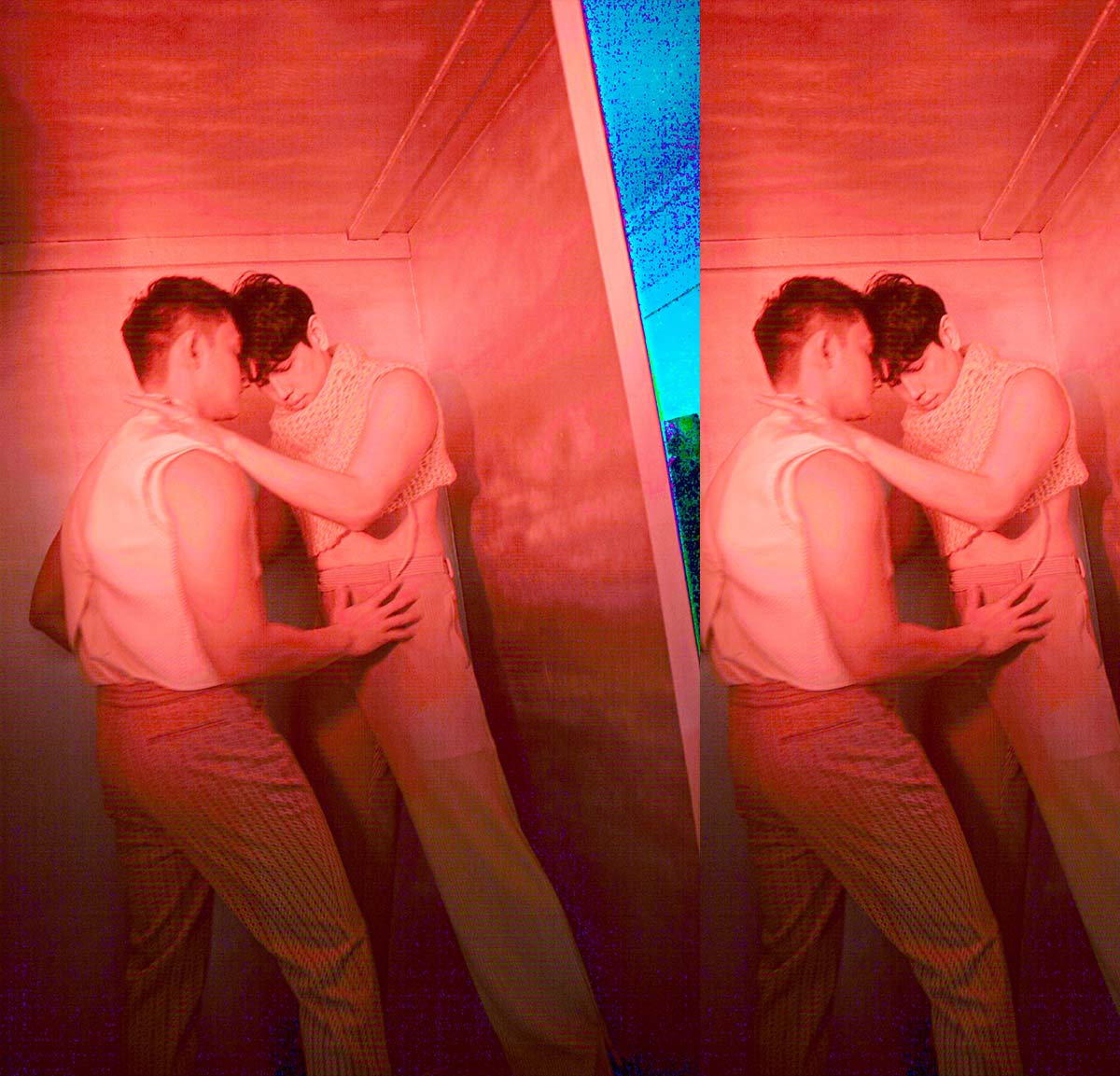 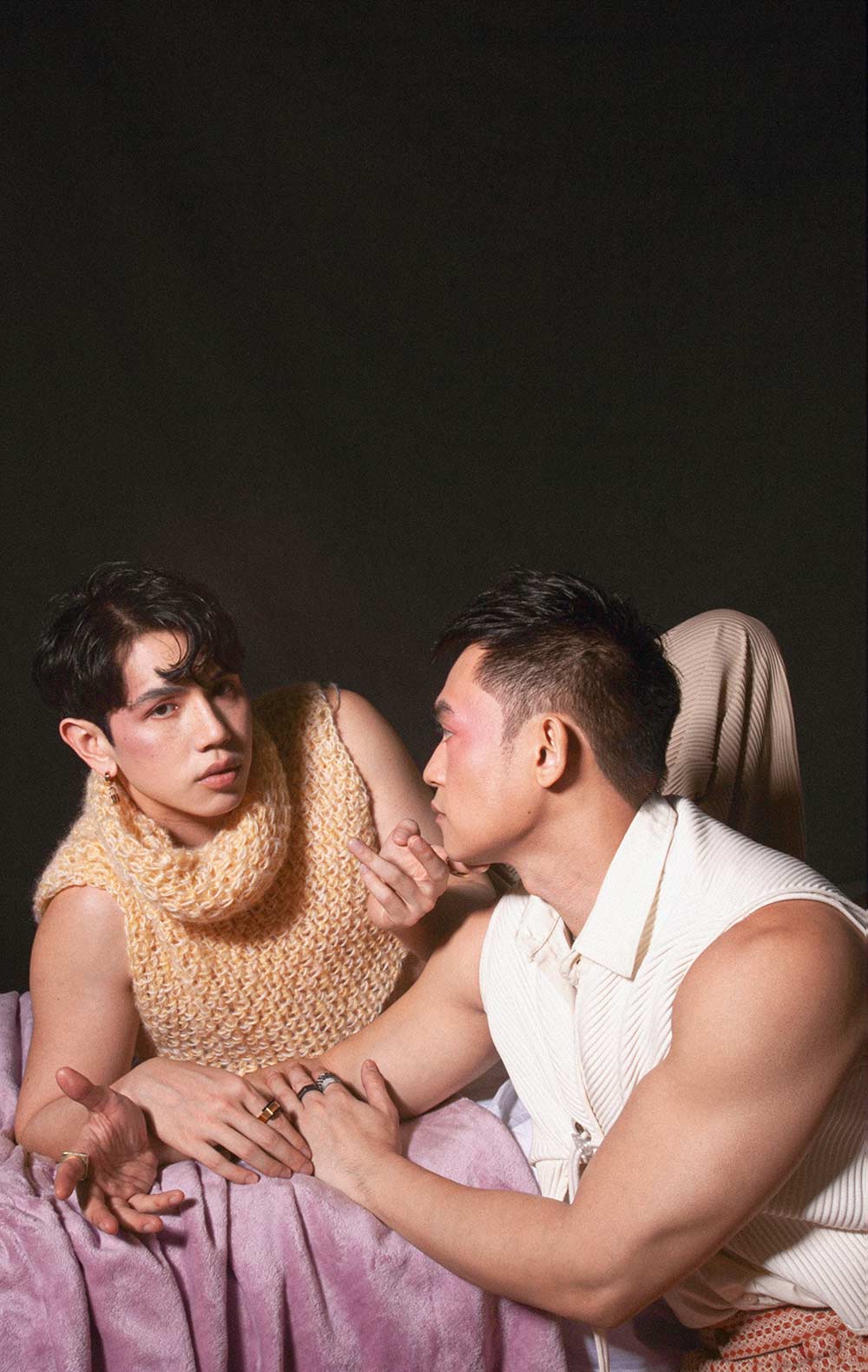 Us Against The World

As the conversation falls into an easy back and forth, we ask our cover stars whether or not they had anyone to look up to when they were kids, if they ever witnessed a relationship that mirrored what they wished to one day have.

But what about now, has society’s views on “normal” changed and do BJ and Mike think they play a part in it? The pair break it down, saying that while younger generations are generally more supportive of LGBTQIA+ couples, there will be the usual “righteous” people who push their own beliefs on a stranger’s page. The trick, as BJ explains, is to grow as an individual as well.

Look At Me Now

“It’s very rare to find someone who gets you right away,” says BJ when we asked why his relationship with Mike is so special. “We’re almost the same age—less than a year apart—and we have the same references. The same things make us laugh, and I think yung laughter is really important.”

“Akala ko rin dati, yung humor niya, refined (I thought at first that his humor was refined),” Mike chimes in. “Pero hindi pala (But it isn’t).” Fortunately, it’s those unexpected and little surprises that often give us the best experiences.

The same holds true for those little celebratory moments BJ and Mike share when someone reaches out and calls them an inspiration. “Not just as a couple,” confirms Mike. “But as kapwa (fellow) gay person. What we do, [how] you’re successful in your career. Yung mga ganyan. Mas nabibigyan sila ng confidence in life (It gives them confidence in life).”

BJ closes us off: “That’s the one good thing about social media. Parang it [has] democratized who we have access to and who we can look up to.” And we couldn’t agree more. 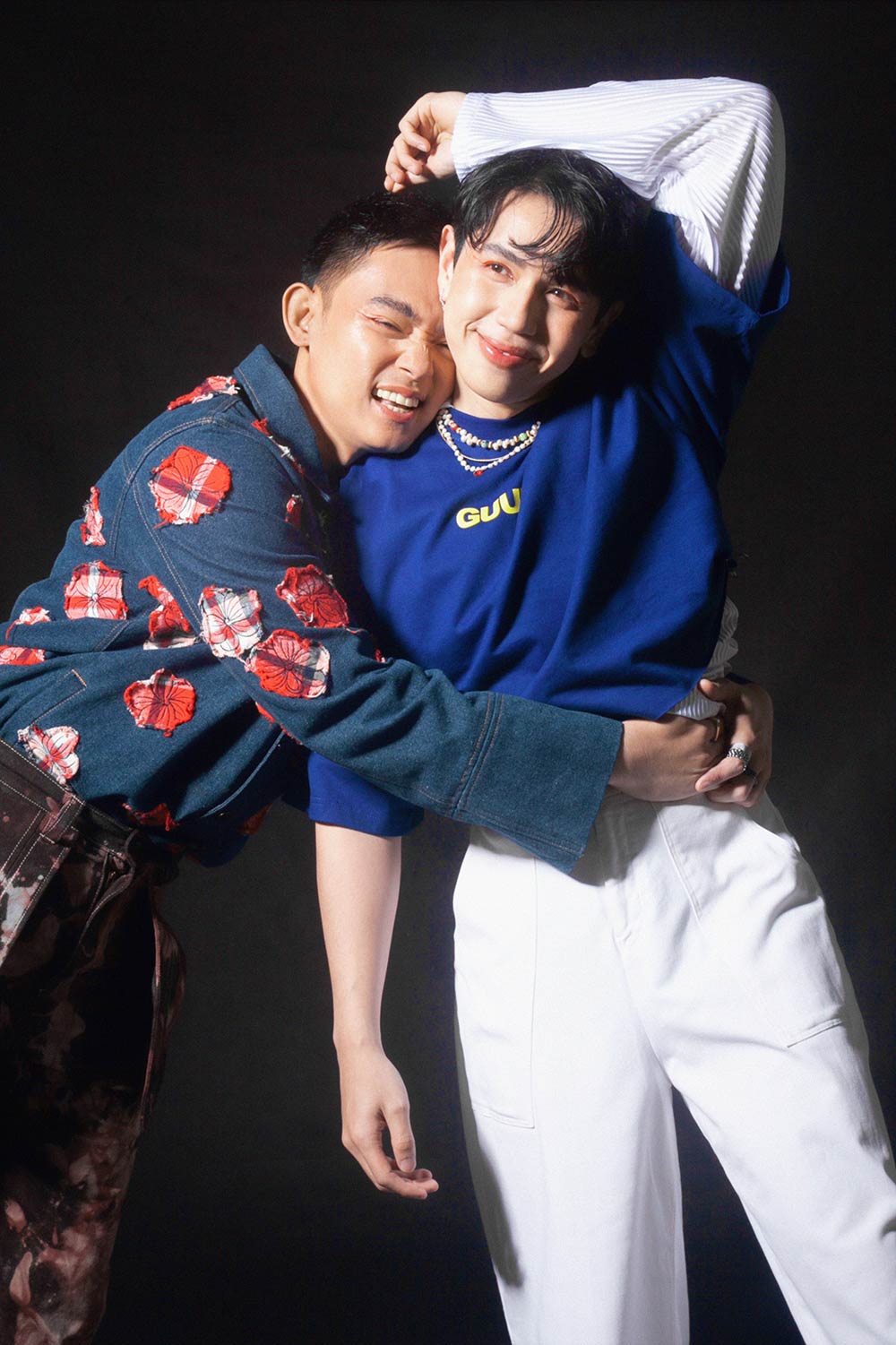 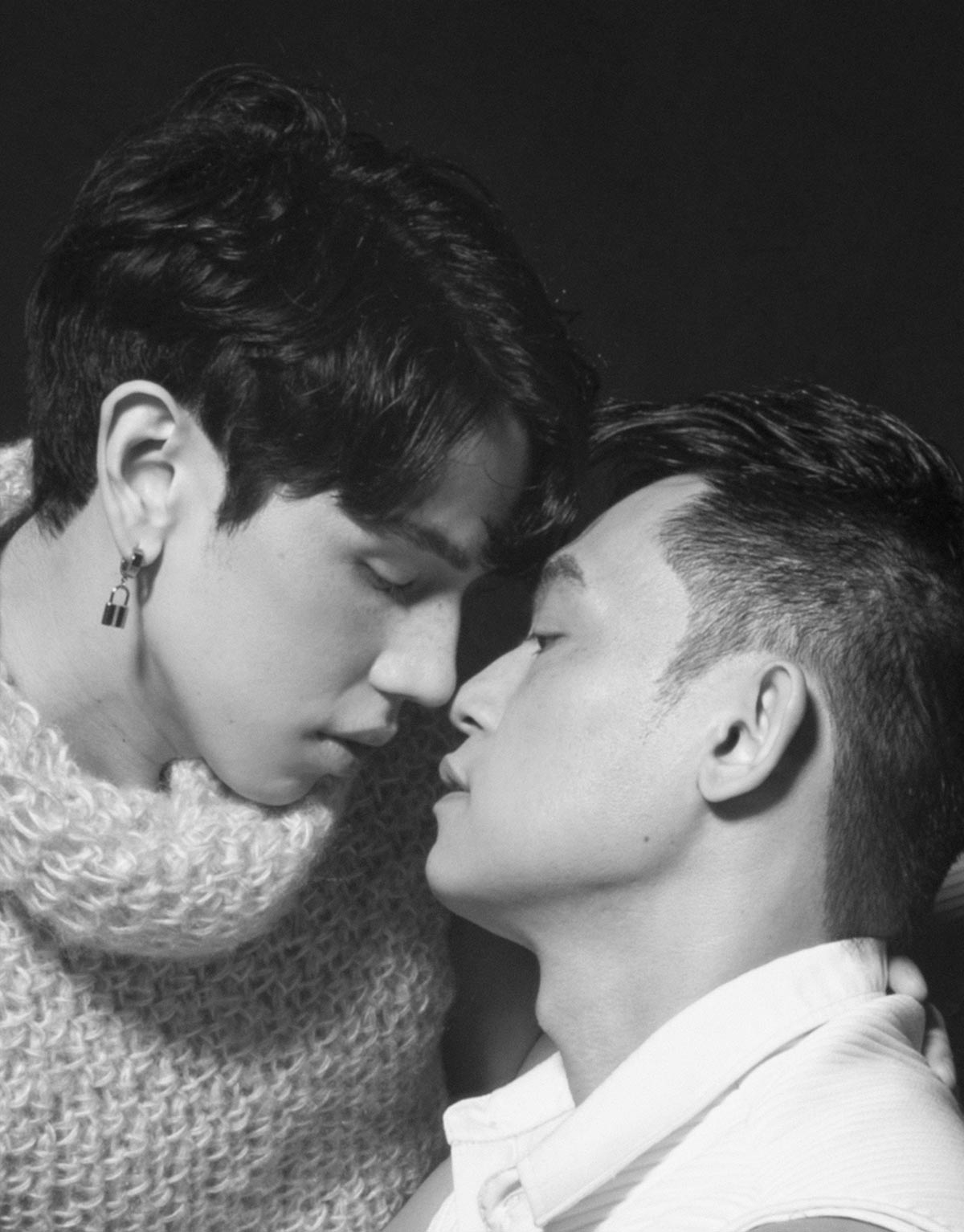 In a world that still struggles to accept Free Love (related article) and still double-takes when seeing couples that don’t resemble their own preferences, BJ and Mike—and everyone else who embodies their true selves—teach us that it doesn’t matter. And the truth is that our cover stars wouldn’t change anything at all.

When we give them the opportunity and ask—if you could have told your significant other something at the darkest point in their life, what would you tell him?—their answers surprise us. Mike says he would tell BJ to focus on his work; BJ would tell Mike to eat something other than butter so he wouldn’t get hospitalized for malnutrition.

And it’s here where we close the interview, because not much needs to be said. These two are thrilled with and thriving in where they are and who they’re with. There’s no need to rearrange the past because it’s what brought them to today. All the hardships and lessons learned the hard way have led to this: free love, a love that’s free, refuses to be quiet and deserves to be celebrated 365 days of the year.

What I Wish I Knew About Dating When I Was Younger

Valentine’s Day from a Male Perspective