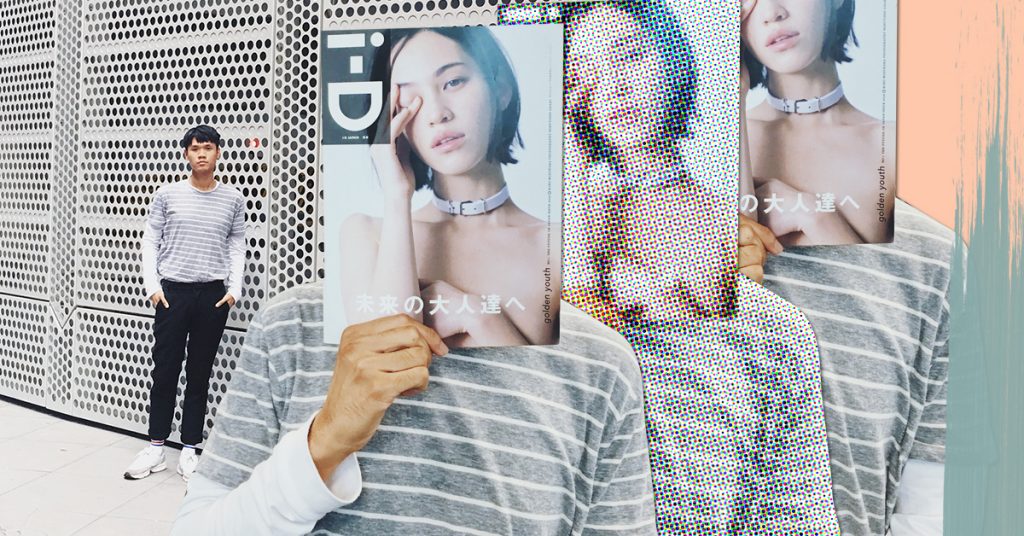 Say hello to the creative thriving in corporate

When 28-year-old apparel graphic designer and photographer Edrick Bruel was first approached about this feature, he cracked up. This wasn’t a kind of reflex or mechanism of somebody who just doesn’t know how to receive a compliment. He genuinely thought we were kidding. “Me? Wait. Why me?!” At this point he’s gathered that the proposal is no joke. Still, Edrick laughs (out of nervousness, perhaps, or unease); he has always relished being able to fly under the radar. Now he’s on yours. In this day and age, there certainly is no shortage of talent in the industry: another day, another emerging artist, another person to watch. This crop of fresh talent, when clumped together, is a wonder to observe, too. They pick up on things faster. For mere newbies, they manage to raise the bar higher. For inspiration, they no longer only look to their mentors, instructors or idols either. They can now look to their peers. The challenge for young blood, then, is figuring out how to stand out from the same pool of celebrated talents they belong to. A diamond in a pool of coal is easy to make out. But if everyone else in that pool with you is a diamond shining too—likely as talented as you are, as dedicated as you are, as laser-focused as you are—then what? It’s the downside to the upside.

In dealing with such tricky business, it’s easy to get side-tracked by the desire to embellish for the sake of standing out. It’s even easier to overlook the fundamental concept that might just be the key to all this: authenticity.

This was our answer to Edrick Bruel whenever he came around to ask if we were sure we wanted to write about him. Well, it would have been anyway. No matter how well-deserved the praises, he’d always rather talk about something else: ideas, beautiful locations or beautiful photos that inspire him. All he wants to do is find beauty in everything. It sounds like a tragic cliché, but it’s not a fluffy, airy bunch of nothing in Edrick’s case.

“Great photographers speak the language of taste, timing and tenacity”

Picture this: He’s making his way through the office food court at the peak of lunchtime. People are coming and going. It’s crowded, noisy and the place has gotten a little dirty. Something catches his eye: it’s a temporary Dunkin’ Donuts kiosk at the corner of the floor. For a second, he stops thinking about what he’s getting for lunch and walks towards the bright orange stall. He whips out his camera phone and bends down to get a closer look at munchkins. Yes, munchkins. Little balls of deep-friend dough dusted with butternut powder. They’re all lumped together on a tray and tucked behind a glass display. It’s mundane stuff. Edrick, however, looks at them thoughtfully as though they’re pieces of a puzzle he just hasn’t put together yet. He takes a couple of shots, moves closer and then moves back. A couple of more shots and he walks away. The surprising outcome of that random two-minute moment at Dunkin’ Donuts is a visually captivating image: striking composition, beautiful color treatment, munchkins that looked sexy. Yes, managed to make munchkins look sexy.

A great eye is something one is born with and cannot be cultivated overnight. The sense of wonder, of curiosity cannot be spoon-fed to an artist. Taste can never be manufactured. Once more, for amazing talents like Edrick, it boils  down to a genuine sense of self. In a way, humility is what follows after; the authentic hardly ever find the need to compensate with fluff, gimmicks or making noise.

Not one to rest on his body of work that speak for itself, Edrick admits he’s his own toughest critic. “Oh, I know this is one thing I need to work on: I overthink. I doubt myself sometimes and I get too critical,” he says. “I know it’s a disservice to yourself when you know you have potential, pero ang hirap rin gumalaw ‘pag wala ‘yun [but at the same time, it’s hard to make a move without these]. I feel like being too confident or relaxed is a worse type of disservice. So how I see it is that a pinch of doubt can sometimes be the thing that pushes you forward.”