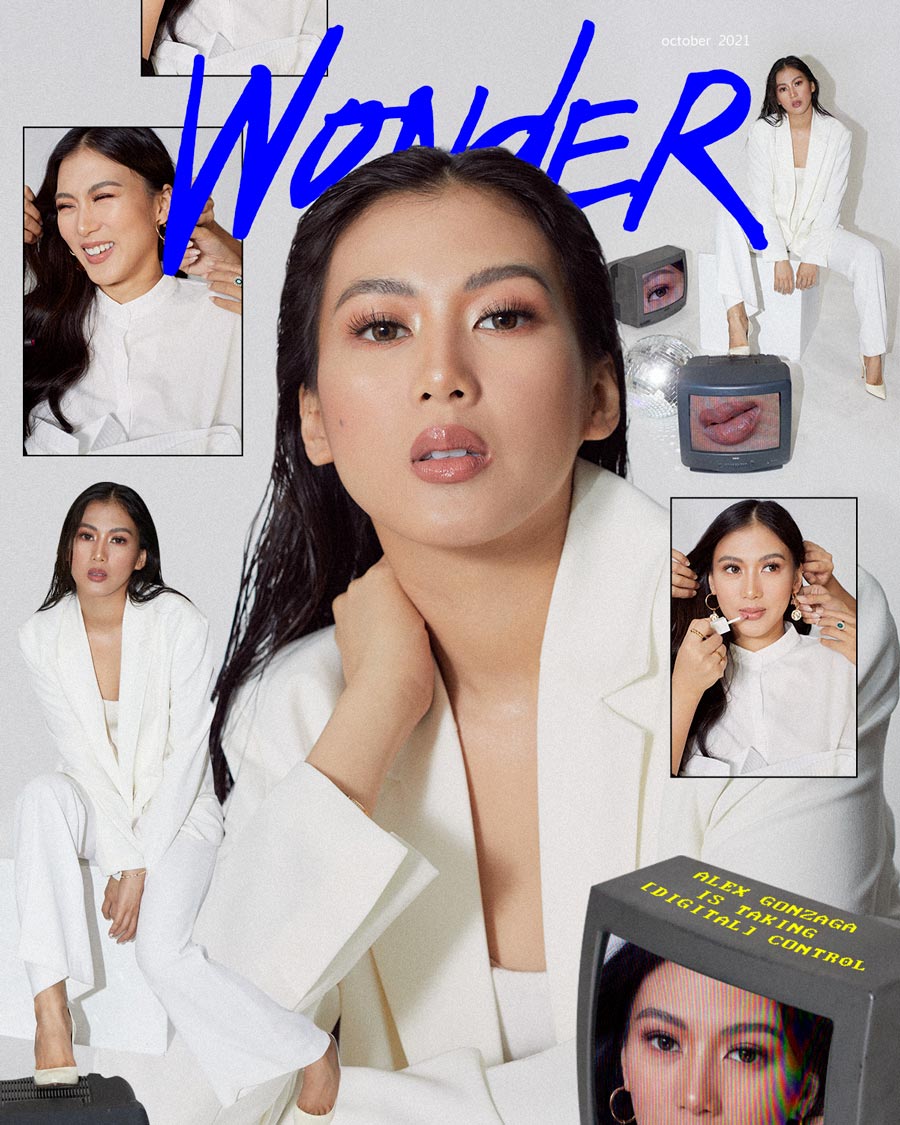 Entertainment—as a form of pure delight and distraction—has never been more essential than in a life-altering pandemic. It comes in many forms—through a rediscovery of old hobbies, a newfound appreciation for K-Pop or even the latest season of a Netflix favorite. With screen time skyrocketing, “doomscrolling” as the inevitable norm, and languishing as the buzzword for 2021, lockdown has given us dependence on technology like never before.

For many, our screens have paved a way for us to form intimate connections, even with strangers whom we admire. The pandemic has given rise to a new generation of content creators, with new platforms like TikTok to explore and make sense of life in quarantine. It has also put celebrities-turned-content creators within reach as they turn to platforms like YouTube to communicate with their audience, bringing us unfiltered content around their lives. 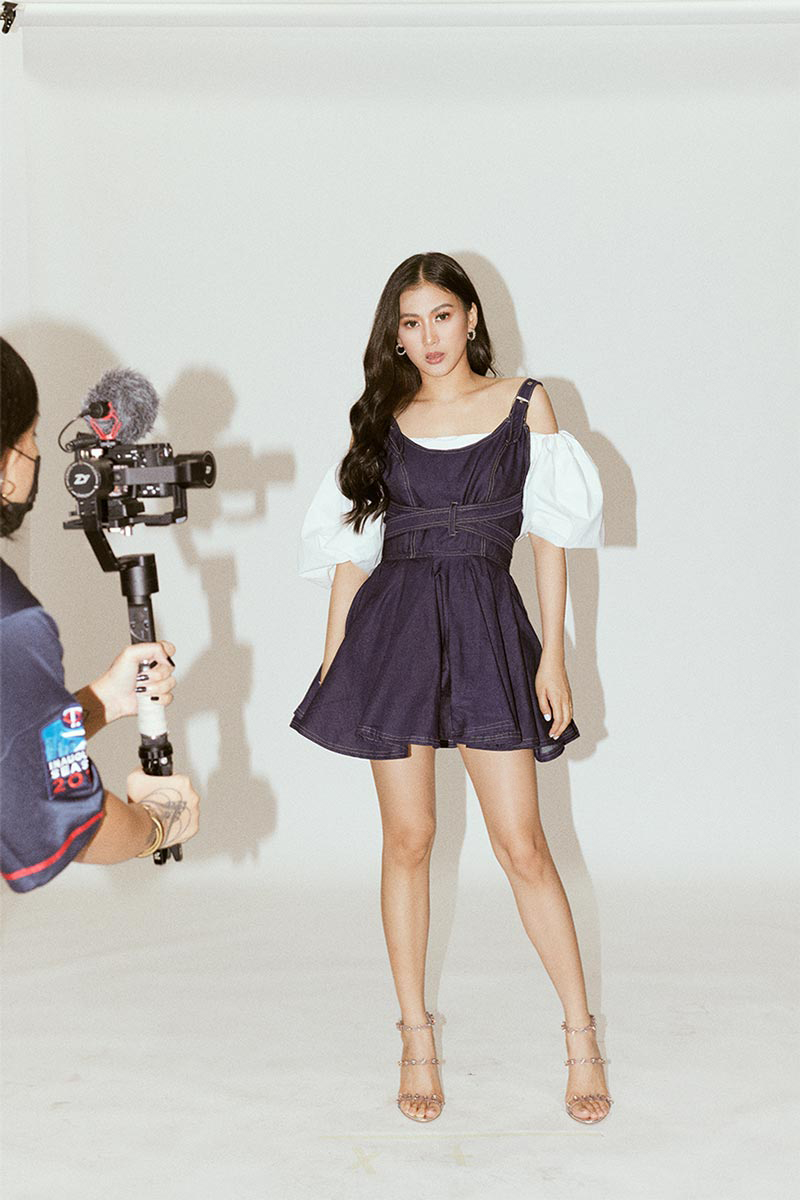 For Alex Gonzaga, a well-loved figure in many Filipino households, transitioning to digital was an opportunity to take control of her content. The renowned television host and actress, with her oldest video dating back to July 2017, has already garnered 11.5 million subscribers on YouTube. This is in many thanks to her effortless, candid humor and authenticity, which Pinoys all over the world have fallen in love with.

Her humorous videos, most of which have garnered millions of views, have become a form of escape for millions of Filipinos. From showcasing family pranks and even interviews with political figures like Vice President Leni Robredo and Pasig Mayor Vico Sotto, Alex doesn’t shy away from getting up close and personal with influential figures, giving her following a candid look at their behind-the-scenes.

Alex narrates, “It’s not [my] decision [to switch to digital]. For me, it’s like God’s plan because, during those times, I [didn’t] have any work [on] TV, and I felt that everything that I’m doing in the mainstream media is not authentic or genuine to who I am. So I started to do social media and upload content, wherein I am happy with what I’m showing and it’s really who I am.”

On her transition from traditional media to digital media, Alex shares, “I became more like a creator rather than an actor, kasi when you’re in the entertainment industry before, when you go to the set, parang you just do what the director or writer will tell you. But now [that] you’re a content creator, you’re more responsible and hands-on sa paggawa ng (in creating) creation mo because you have no [one] else to blame but yourself; so you are more creative, more [thoughtful] and more committed [to] giving your best kasi nga (because) it’s all on you.” 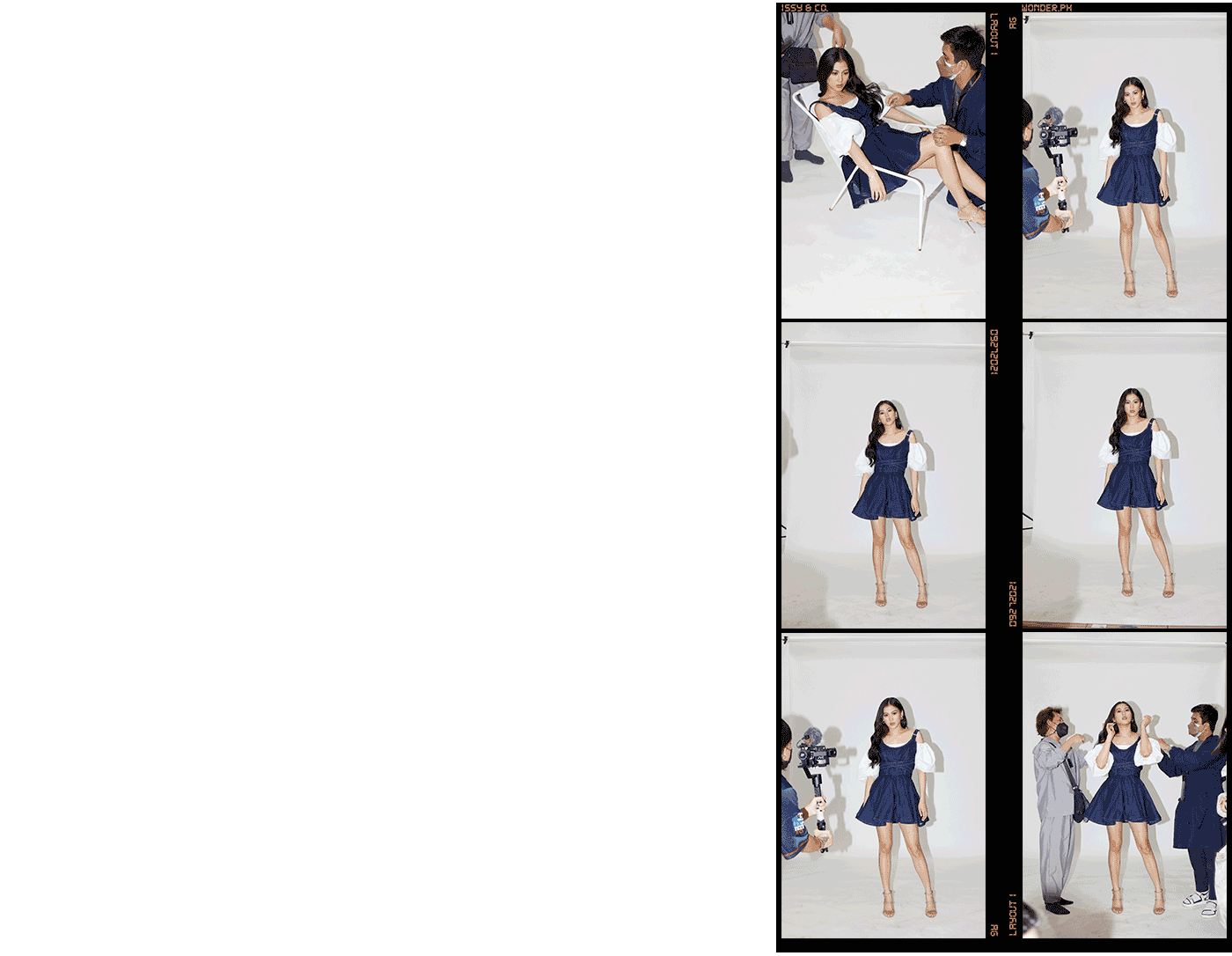 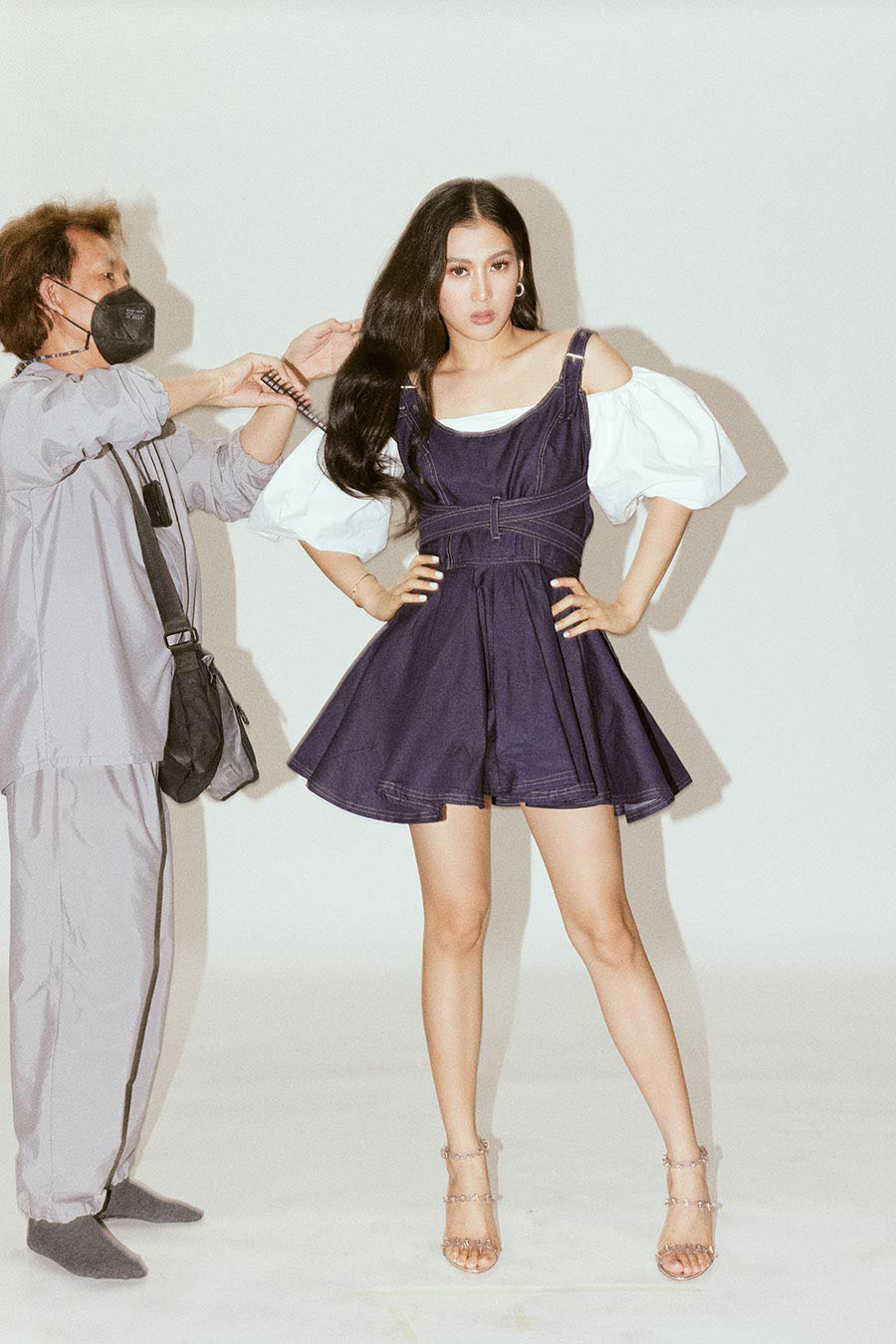 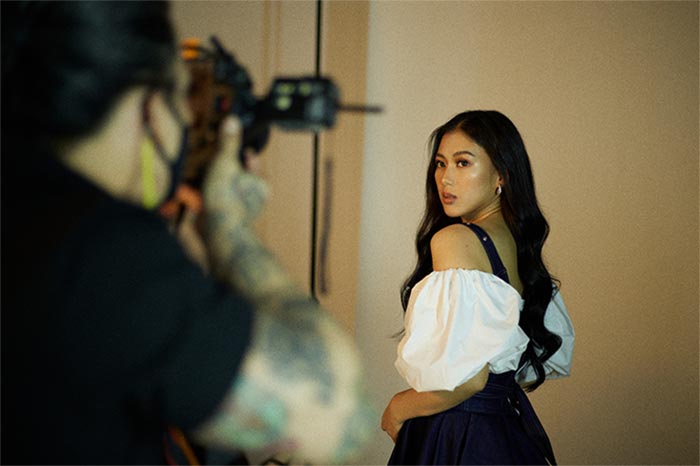 With several years in show business under her belt, Alex G has gone through it all. In the beginning, she shares, “Feel na feel ko na agad na artista ako kahit naman na hindi. Alam mo ‘yung feeling mo na ‘THIS IS IT! I MADE IT!’ But then after ilang years, [you realize] it’s a long process.”

(I felt that I was already a celebrity even if that was not the case. You know that feeling  ‘THIS IS IT! I MADE IT!’ but after a couple of years, [you realize] it’s a long process).

During her first years in television, she had to juggle both her life as a celebrity and her studies, successfully graduating with a Bachelor of Science in Child Development and Education from the University of Asia and the Pacific. She shares, “Siguro because I was studying also, medyo nahirapan ako with my schedule to balance my [studies] (Because I was studying also, I struggled with my schedule to balance my [studies]). I’m trying to build this career in show business, which really consumes most of my time, so syempre ganun din sa (it’s the same with) school. So I have to juggle both my studies and career for the next six years of my life.”

Alex has always been the “funny one,” even during her formative years. She candidly narrates, “In school, [I was] the funny and papansin (attention-seeking) one and, most of the time, epal (know-it-all).” As a result, comedy is something she’s mastered throughout the years, but she’s learned how to take a sensitive approach, holding herself accountable for her own actions. She adds, “Before, I [didn’t] think of what other people say about me, but now, ilang years na sa pagiging (in the couple of years of being a) content creator, so I have bashers. [I experience] mga call-outs ng audience ko, so parang I realized that even if you say it’s your channel or your page, when you upload [something], it’s still out there for the public to consume or to watch, so you should be really careful and be sensitive. If ever someone who’s not a fan or going through something stumbles upon your videos or post, [you hope] they won’t get hurt or offended, so you really have to be sensitive and careful pa din.”

Her rise to digital stardom—having already garnered a billion views for all her videos on YouTube—has its own unique set of challenges. As her following continues to grow and multiple platforms spring up, she has had to stay creative and relevant. “For the first three years, I [didn’t put] much effort because parang all the ideas are just coming to me, pero syempre (of course) now it’s my fourth going on fifth year so, you know, most of the things or content I’ve already done. [I] have to be more creative,” she shares. 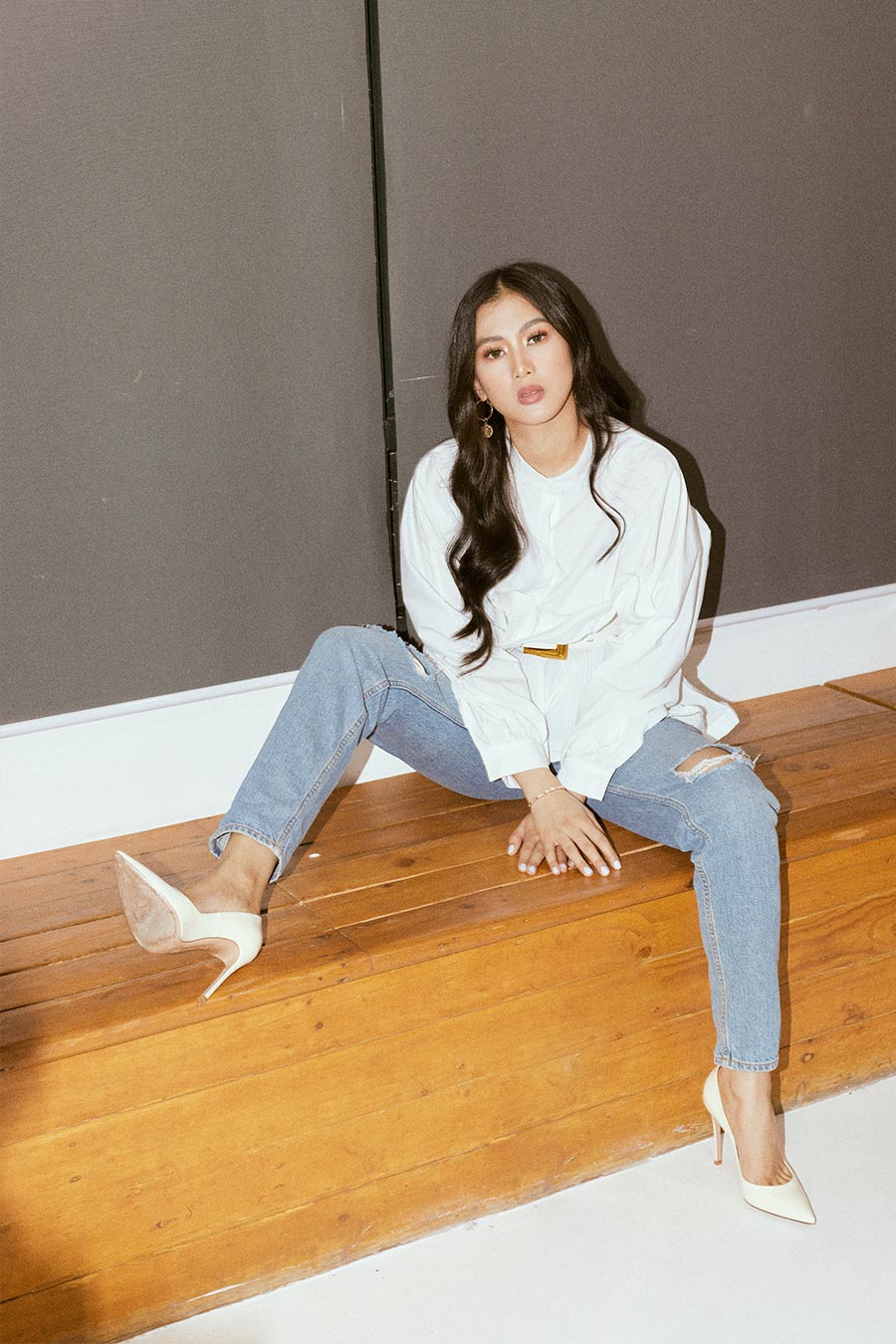 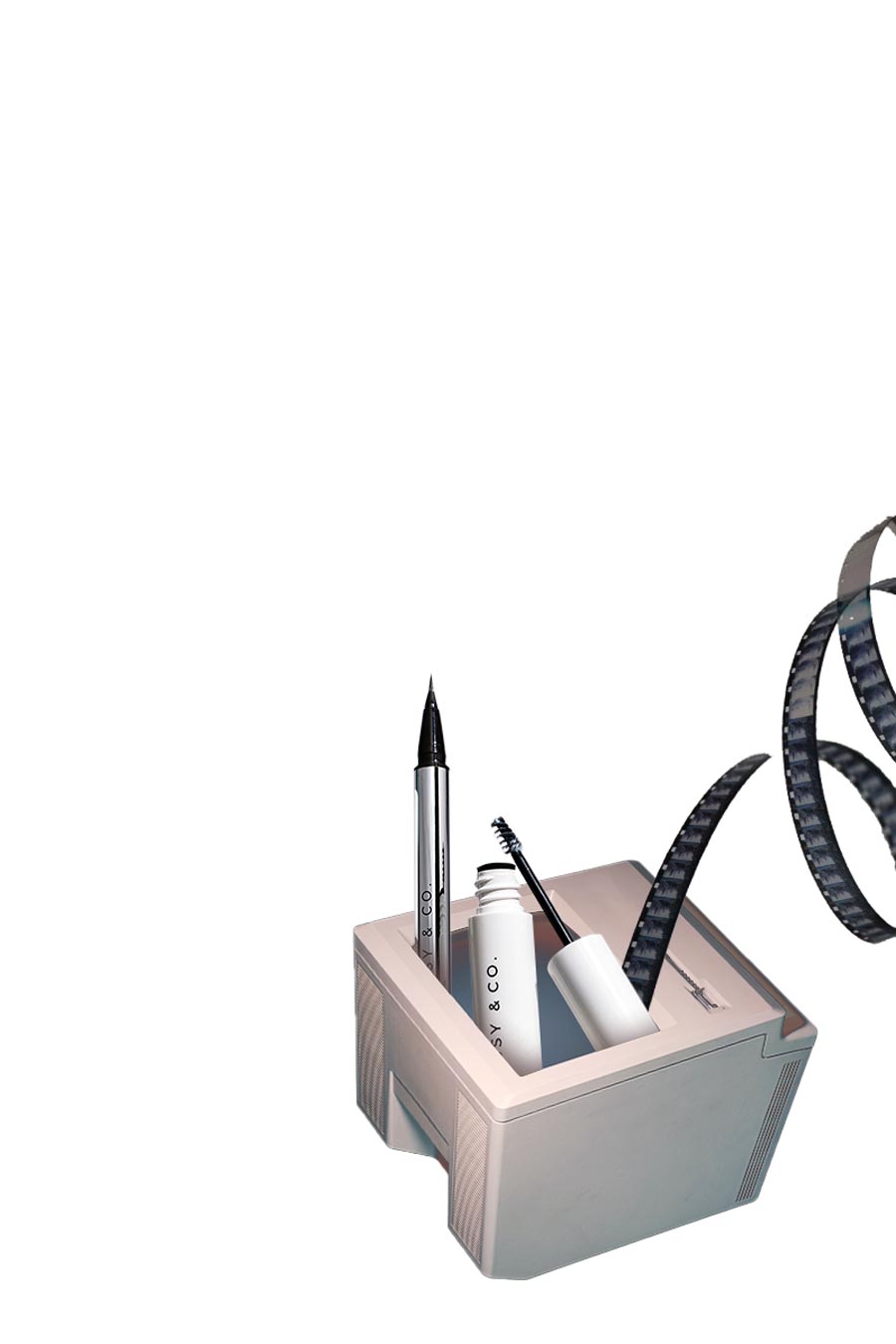 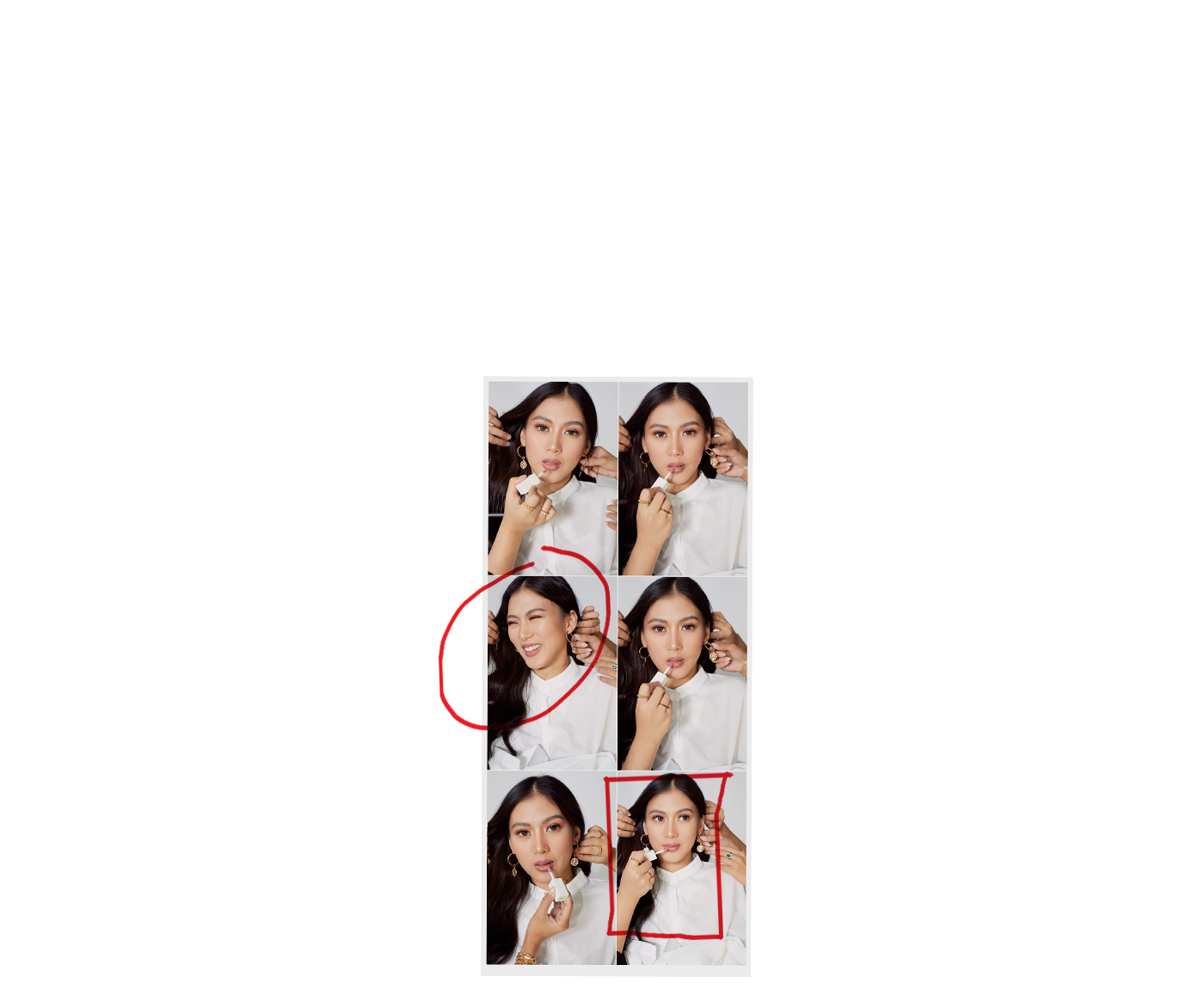 Navigating her private life amidst her very public status has been a struggle for Alex, especially as someone who wears her heart on her sleeve. Though some of her own life experiences are embarrassing, she loves finding joy in them and sharing it with her fans. She notes, “If it weren’t for Mikee and my family, I would have shared many things, but as for myself, I really don’t care because I find all my past experiences funny. I can always find the lighter part in everything that I’ve been through, parang all my ka-dramahan (drama) and experiences, for me, I want to share it because that’s me.” She adds, “My ate always reprimands me because I always like [to be] an open book to everyone I meet, parang I always tell them my stories because I’m not ashamed; but because I have my husband and family, they always tell me that I should be private, in a way, and should not share everything.”

With Beauty Month upon us, Alex remains to be the face of homegrown beauty brand Issy & Company. As the brand turns two in November, the O.G. Issy Girl continues to advocate for the brand’s “beauty made easy” philosophy. Alex shares, “What I love [about] being an Issy Girl is [that] it’s beauty made easy. Because I’m not really a fan of glamming up, always wearing makeup, I just like putting minimal makeup on my face or adding a little enhancement sa everyday look ko, so as much as possible, I don’t wanna wear makeup. But of course, [for] uploads or posts, you have to be the best version naman. So at least kahit papaano (in whatever way), enhance your beauty, and that’s what Issy Girls are ‘di ba?” 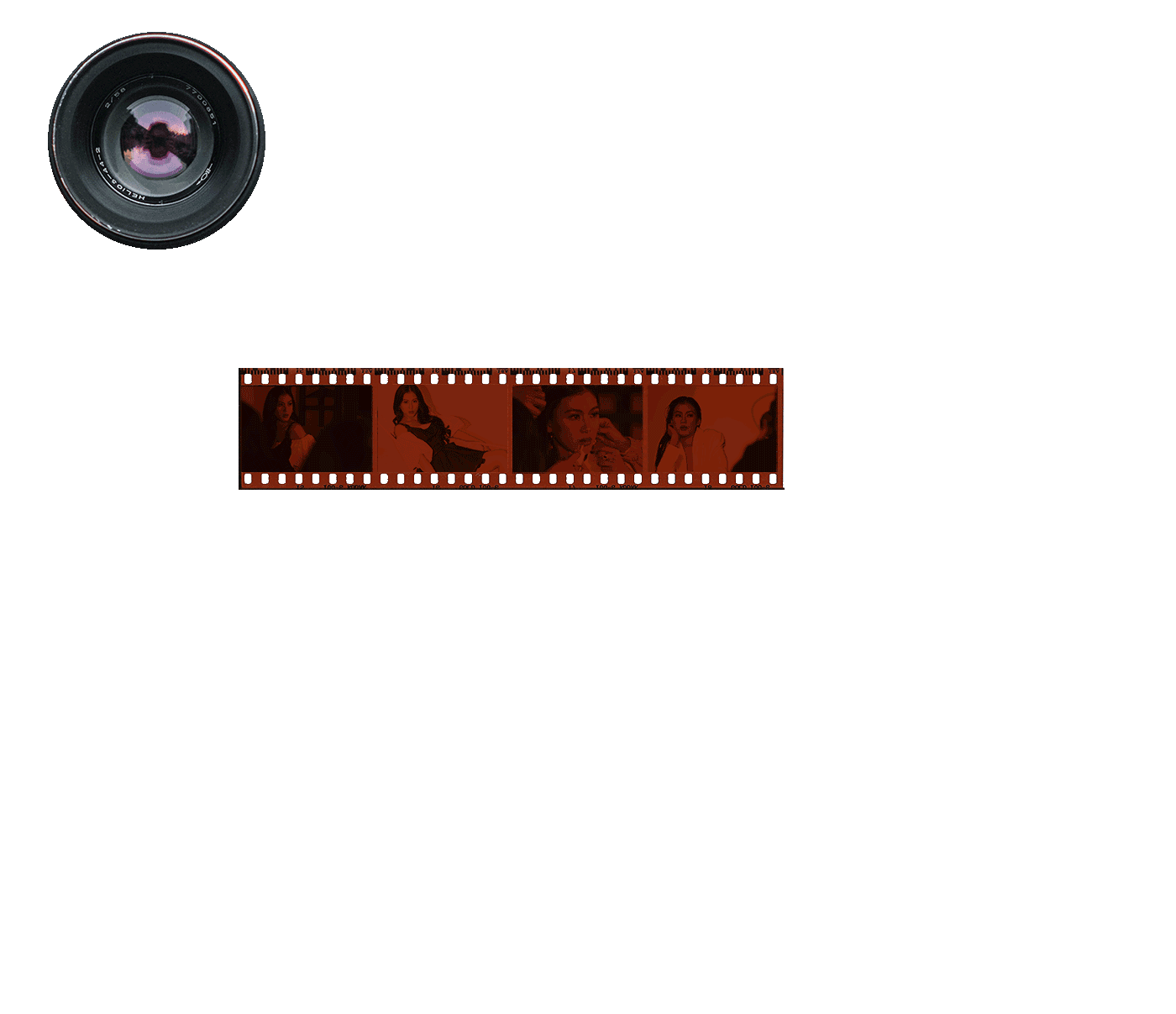 With Issy & Co.’s commitment to cruelty-free, good-for-your-skin and easy-to-use products, they have made themselves a game-changer in the local beauty industry. Alex notes, “What I also like about being an Issy girl is [the brand is] cruelty-free. What you put on your face is very healthy for your skin. Kasi sometimes, you put a lot of things on your face and then later on, after so many years, you will pay for it. Parang payback time, magkakaroon ng rashes or whatever, ‘yung mga bad effects ng mga nilagay mo sa face mo will show (It’s like payback time, you start getting rashes or whatever bad effects of the stuff you put on your face will show). So at least with Issy, you know that whatever you’re applying on your face, everything is healthy and will be fine even five or ten years from now. Walang bad effect sa skin and face mo and good for the environment (There’s no bad effect on your skin and face and good for the environment).”

Processing these life lessons took a while for Mrs. Gonzaga-Morada, but with experience and gratitude, things started to fall into place. “It took me a while to get [to] this position in life, ‘yung ganitong perspective sa life (to have this perspective in life), but you know, it’s always a process. You should always still be grateful and still feel content in whatever situation you’re [in]. You really have to be okay [with] who you are, who you were and what you will be,” she shares. 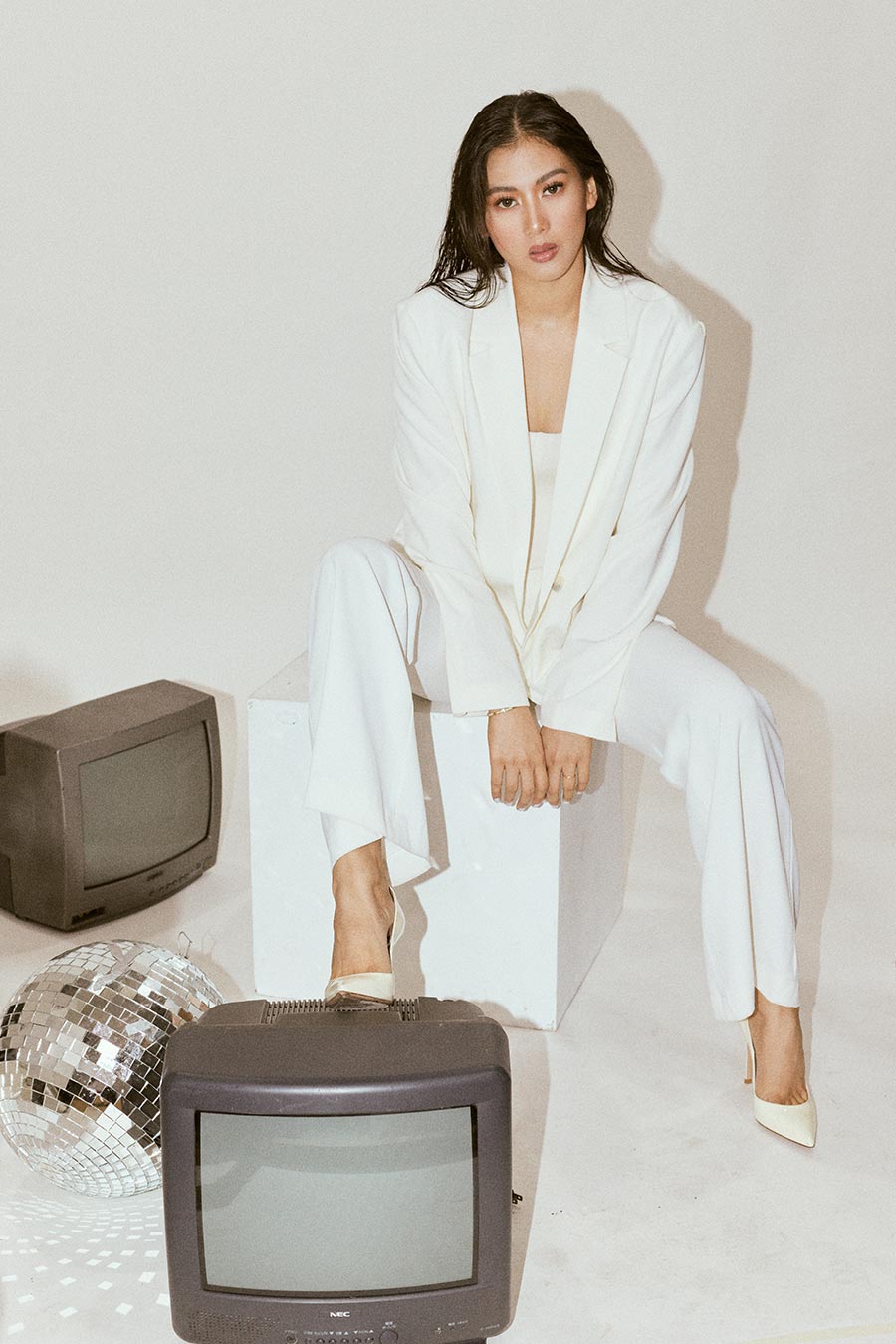 In this ever-changing media landscape, Alex Gonzaga remains a tenacious figure, adapting well to the times. The artista-turned-content creator continues to dominate both traditional and non-traditional screens, and is in the process of completing exciting, new projects. She shares, “I’m very excited with what’s going on, with what’s gonna happen with my life, and I’m very happy that I’m still with Issy. I still want to promote positivity as I want to promote self-love; I still want to promote loving who you are.” She adds, “I have a movie coming up and I have [an] everyday show so whatever comes my way, I will be happy to accept it.”

Through the years, many have turned to the digital space to nurture their creativity. There’s no doubt that Mrs. Gonzaga-Morada continues to dominate—taking full control of her narrative—with her sheer determination, wit and ability to find joy (and humor) in any situation.

Alex has found opportunities in a vastly different platform and, at the end of the day, her desire to entertain is what motivates her to keep creating in spite of the challenges set on her path, many of which the public is still not privy to. She is a woman of indomitable spirit, bringing immense joy to Filipinos all over the world. Because while things are uncertain, we all have the ability to take control of our situation.

What to Expect for Issy & Co.’s First Birthday: New Releases and Traditions