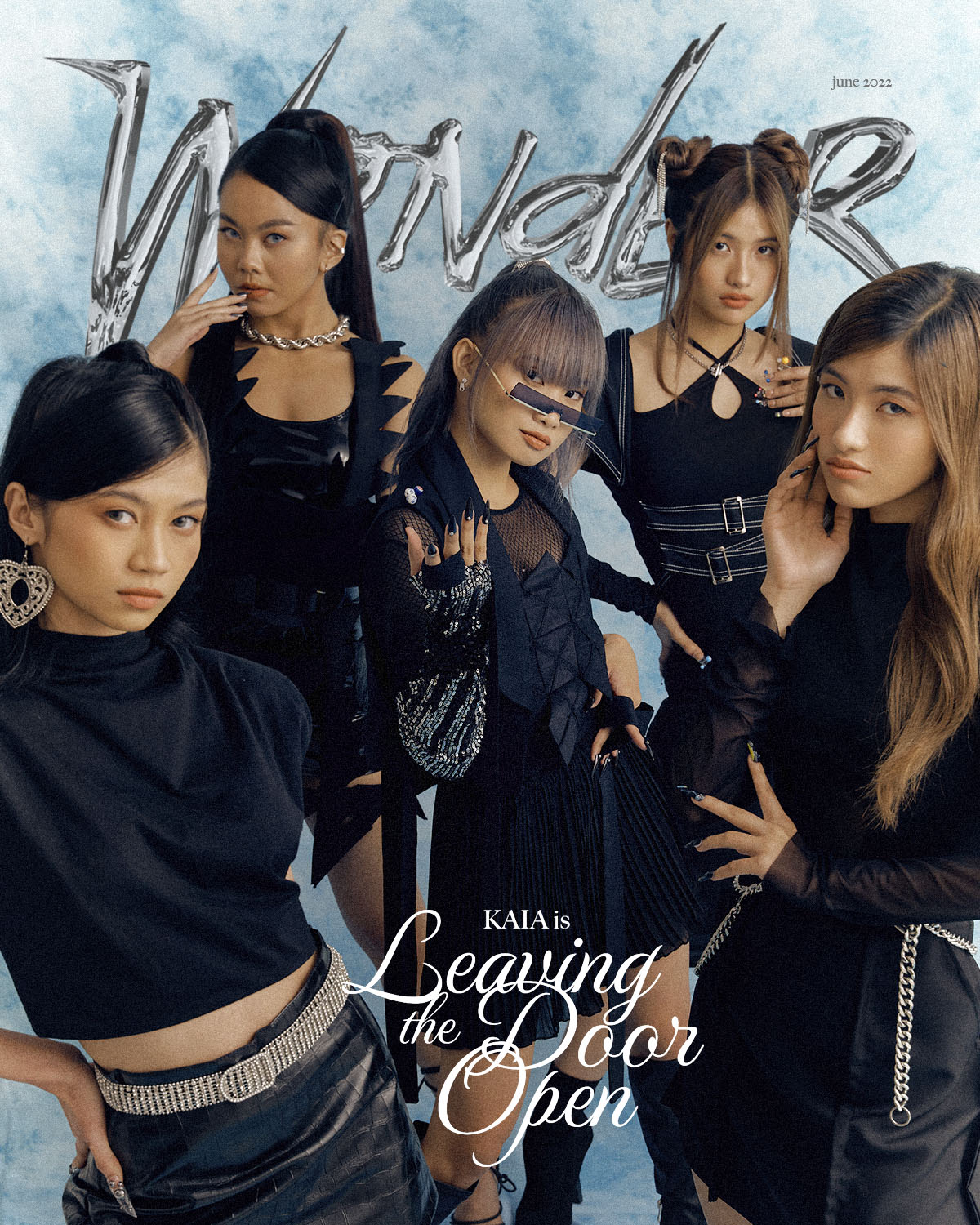 KAIA Is Leaving The Door Open

While our islands have lived their years—through wars and peace, colonizations and freedom—one would be wrong to say we are an old dog unable to learn new tricks. Quite the contrary, we are constantly evolving, taking pieces from our shared past and the everchanging modern landscape, and creating something that is uniquely our own.

Many of us have had to learn to adapt—and we have and have done so successfully. But more importantly, each success is not only celebrated, but also shared. Case in point: artists who have made their own way are paving the way for other musicians. After all, inclusivity is something our generation actively fights for. We understand, more than anyone, that leaving the door open for those willing and wanting to follow, will only benefit us all in the long run. 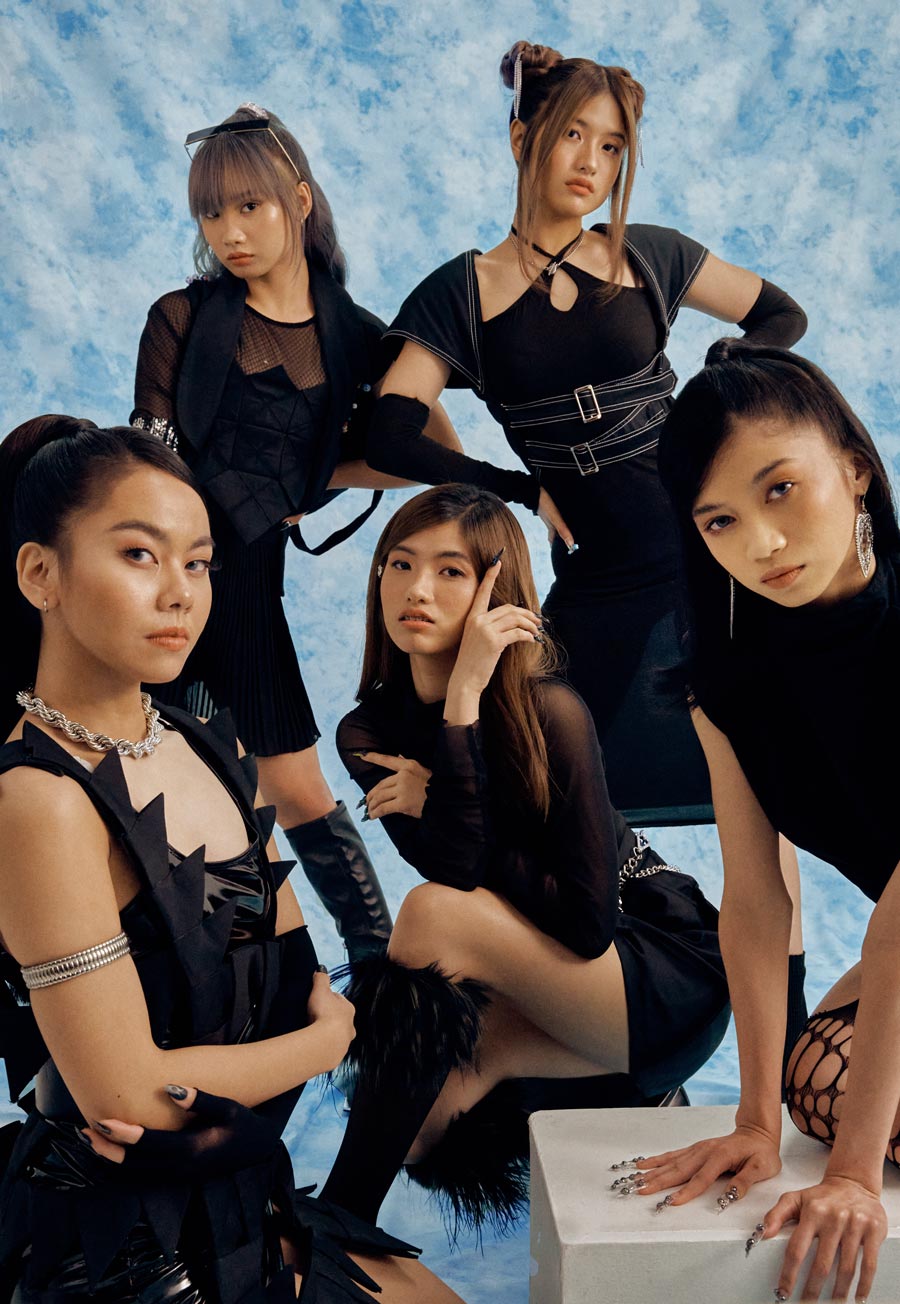 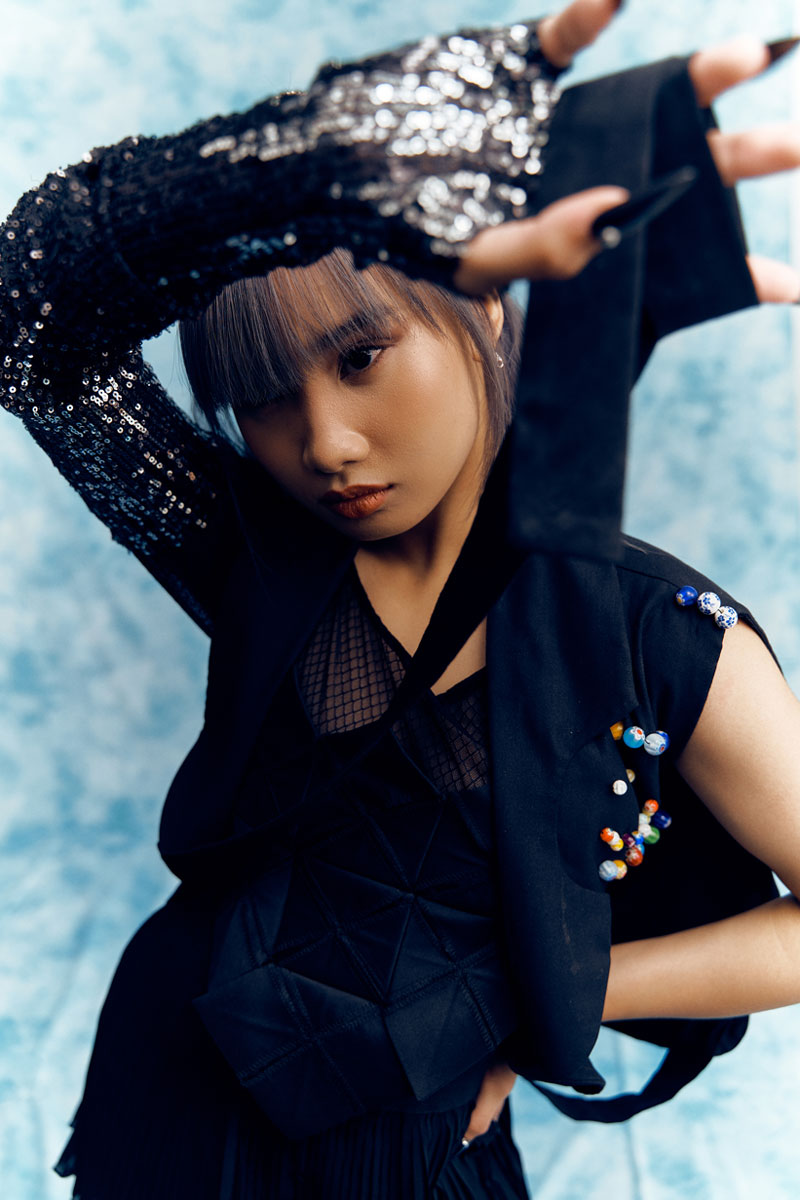 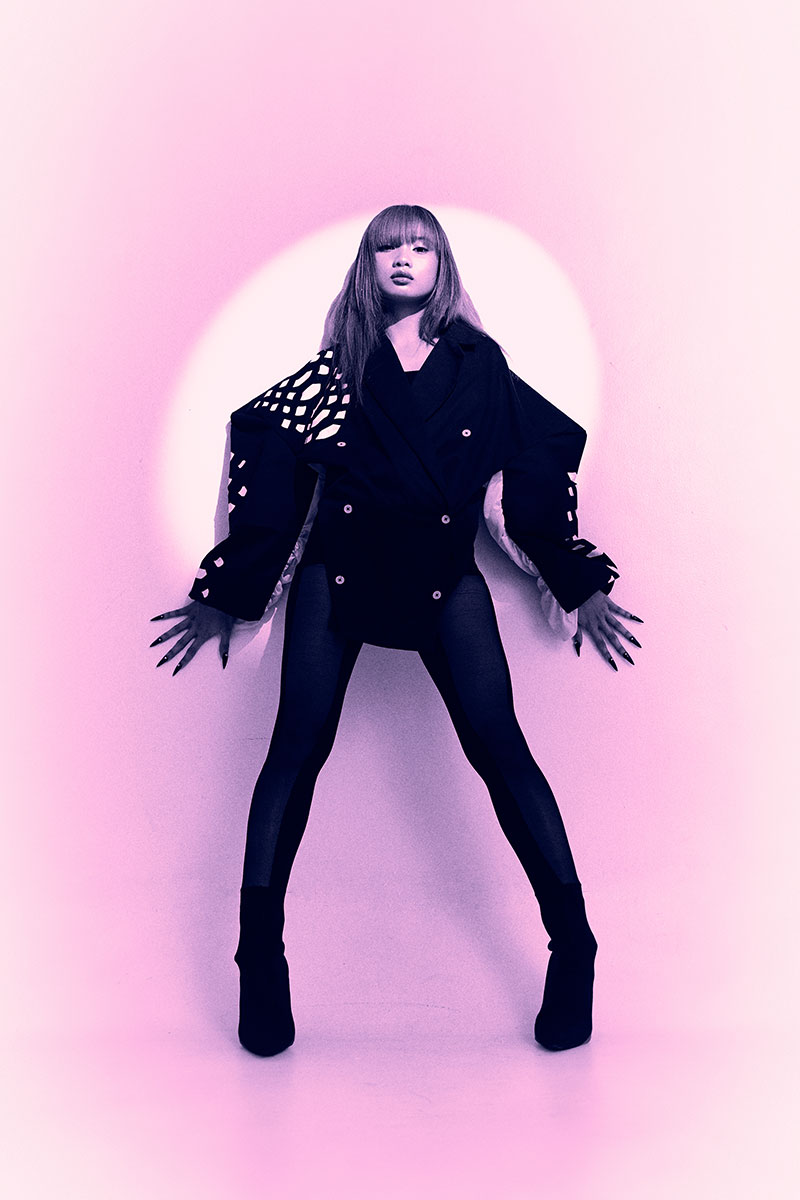 It’s been a while since P-pop expanded into what it is now. In a matter of years, and with a global pandemic to boot, multiple groups debuted and created a diverse pool of talents eager to make their own mark. No one can deny that P-pop has changed, especially because we have our own local sensations taking international stages, climbing up the charts and creating a community needing its own convention. Standing strong and taking their turn in this musical movement is KAIA.

Angela, Charice, Alexa, Sophia and Charlotte sit down with us at the end of a long day, still all smiles and excited to tell their story. “To answer [how we first got together], actually, KAIA came from different places, different cities; and we were handpicked by the ShowBT team to have an audition,” begins Alexa. “We participated in that audition and, from that, we had an evaluation every month to pick the final lineup for the girl group. Here we are now!” 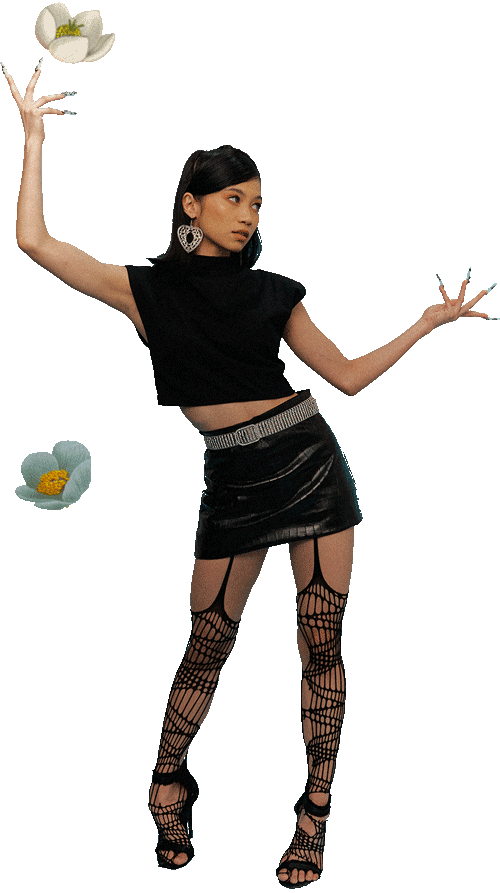 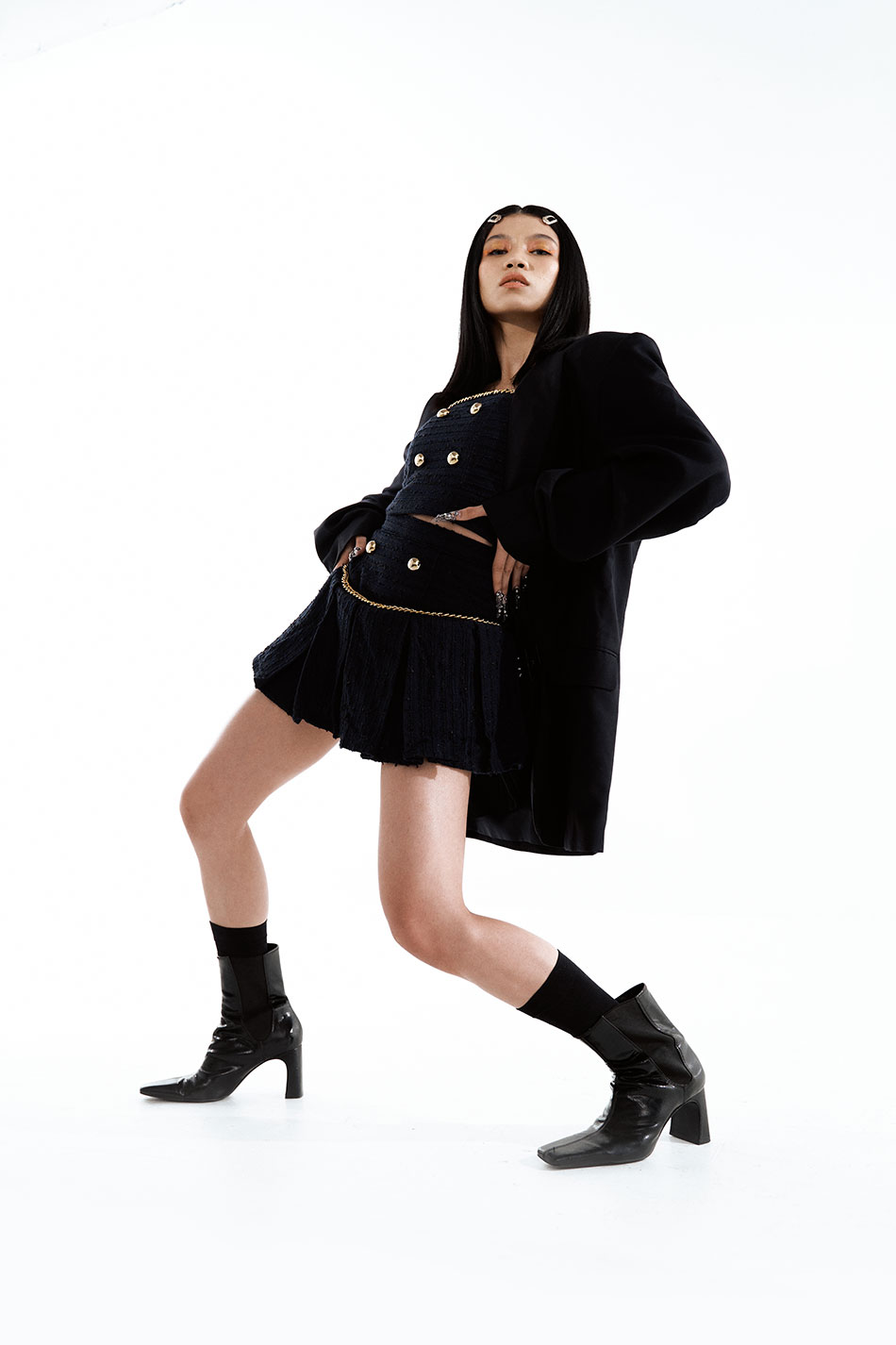 It’s only been a few months since KAIA officially debuted, but they are certain of this: if there’s one thing that we should hold on to as our careers flourish, it’s sound advice from our mentors, determined by the path paved by our very own idols. In their case, the five-piece looks up to those who broke into the P-pop scene before them. They name industry pioneers, MNL 48 and fellow ShowBT talents, SB19 and 4th Impact, whose passionate performances continue to inspire theirs. But on a deeper level, the girls hold onto one important lesson from their seniors:

“Don’t be afraid to make mistakes, because you’ll learn from [them] eventually,” explains Charlotte . “You’ll gain a lot of experiences, and you’ll also realize many improvements that you need to work on.”

And when it comes to musical inspirations, the girls draw influences from both Western and Asian music. Sonically, though, one can’t help but hear some elements of K-pop in their current tracks, KAYA and BLAH BLAH. Alexa acknowledges that the instrumentals bear similarities to the specific sound; after all, their Korean producer wrote these songs. Nonetheless, we shouldn’t be too quick to box them into one genre. As Alexa explains, “We’re still considered a new group. So we’re still in the process of finding our collective sound that complements each of our voices.” The road to finding a niche, as we all know, is long and winding. The girls, like the rest of us, need to start somewhere.

But Angela, Charice, Alexa, Sophia and Charlotte are aware of the responsibility they now hold. “We just want to inspire people by telling our own stories and experiences through music and concept,” says Alexa. “Five years ago, we were really clueless on what’s going to happen, but because of ZAIA [our fan group] and because of this opportunity, we [have] a purpose.” 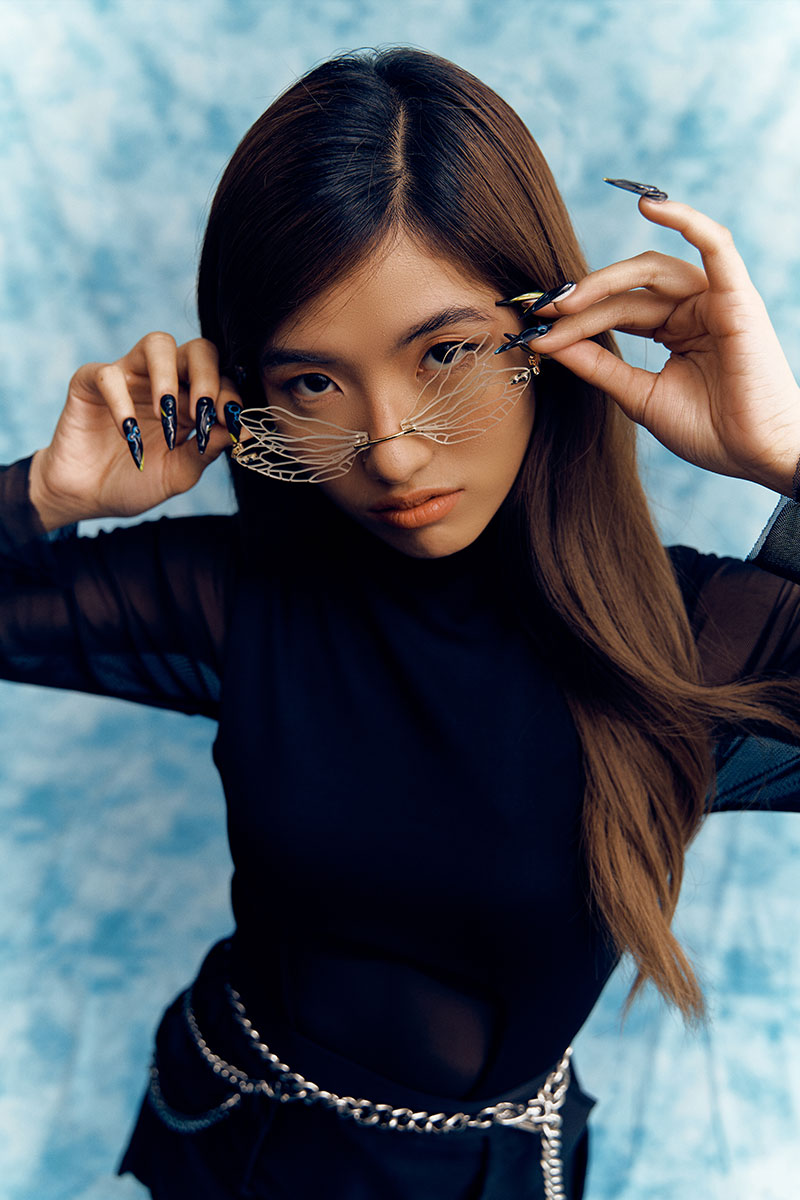 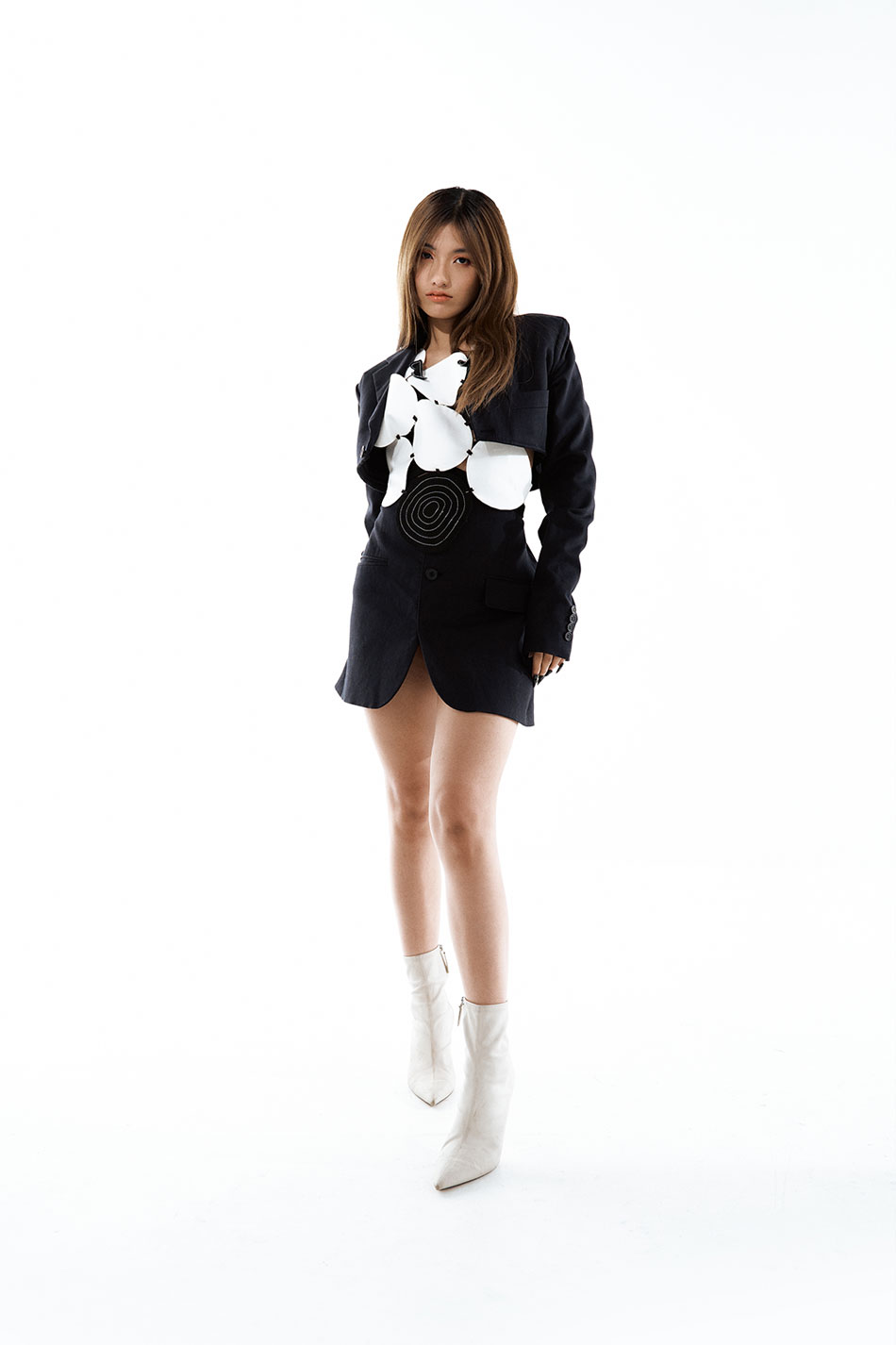 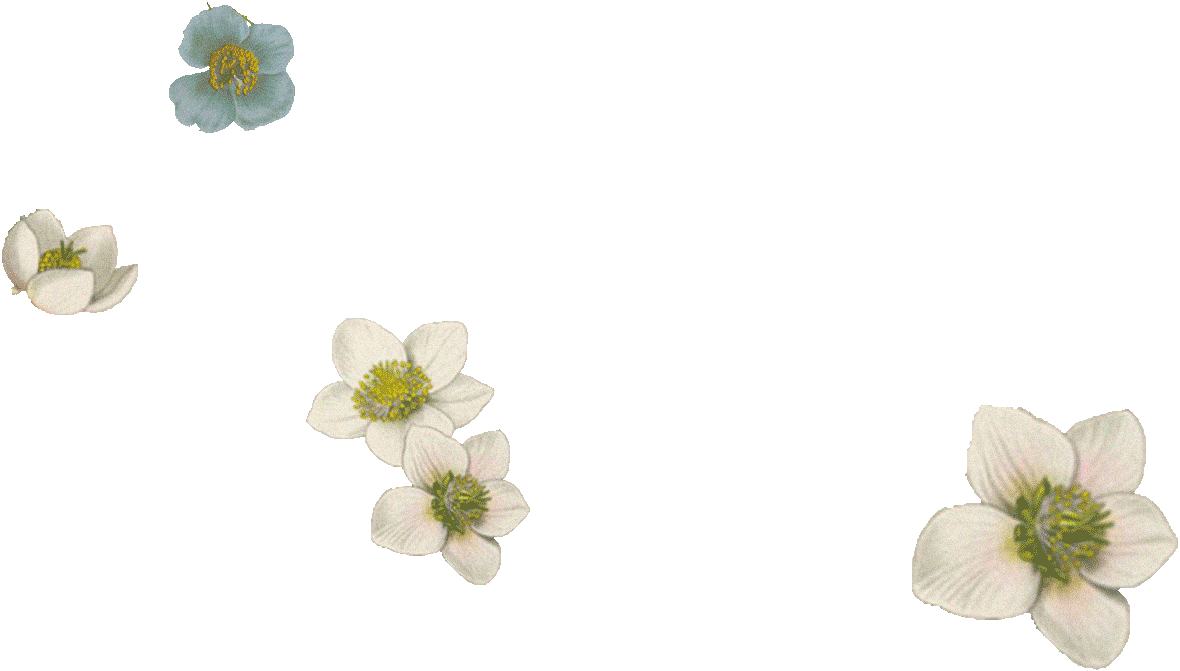 In BLAH BLAH, the girls pulled a complete 180-degree turn from their pre-debut single, KAYA. The fierce and electric self-love anthem narrates the tale of letting a toxic love go—a struggle we know all too well. Through their debut track, the five-piece girl group imparts words of wisdom while addressing the elephant in the room: no one should be worth the struggle of losing yourself.

While mainstream media bombards us with constant messages on self-love, there’s nothing quite like hearing it from a group of empowered young women. “As of now, we want not just young girls but young people everywhere to love themselves and choose themselves,” stresses Angela. Their music isn’t a one-way street, as the girls hope to recruit their fans, ZAIA, to help them build a community that grows with and learns from each other. 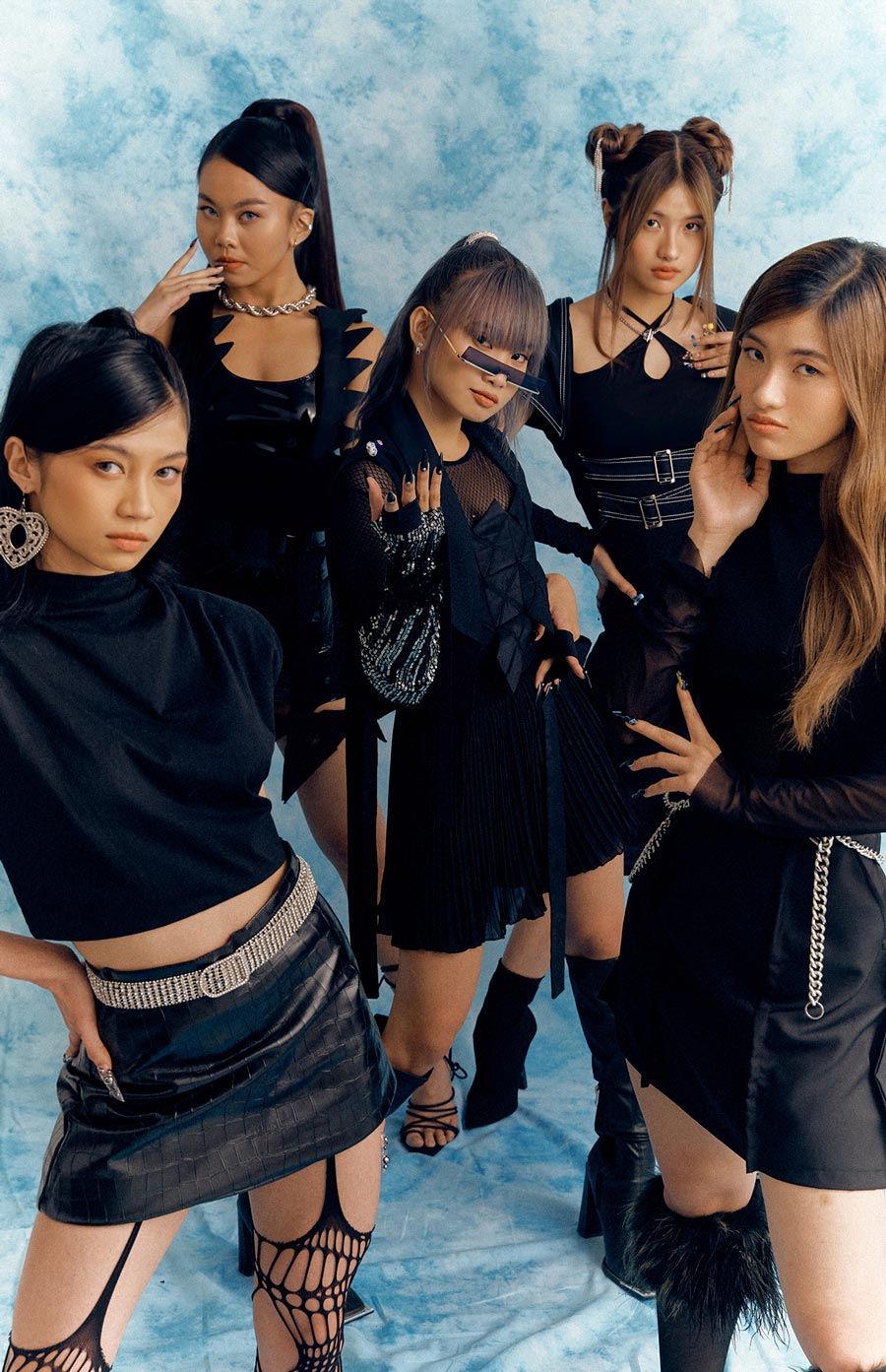 Looking forward, KAIA hopes to keep on sending positive messages through their music. The mark they aim to leave in the industry involves continuously telling their stories and letting their audience know they’re not alone. But they won’t stop there. As Sophia puts it: “We’re still in the process of finding our sound. So as we grow older and grow into a bigger group, I think what we’ll offer our listeners could be much better in the future.” There’s this admirable self-awareness that KAIA exudes whenever they open up about their young careers. They humbly acknowledge that the long path they are yet to forge requires focusing on their own goals and working hard to achieve what they want.

It comes as no surprise that the girls of KAIA had already been working tirelessly towards this dream for a while, even amid the thick of pandemic restrictions. After all, only hours upon hours of training can yield such synchronization, stability and stamina. But, much like others, the Road to Debut was bumpy, and came with trials and tribulations, as well as doubts and worries. They finally reaped the fruits of their labor late into 2021, as they were slowly introduced to the public, leading up to their pre-release song, KAYA. Soon after, their debut with BLAH BLAH was just around the corner.

Officially debuting in April 2022 was always part of the plan. They hoped to come full circle with their debut, which meant having more face-to-face interactions with the press and fans. Charlotte shares that the timing was intentional, as it allows them to showcase their full potential as a P-pop group. She explains, “Para rin makilala kami ng mga tao na genuine and authentic kami (So people will know that we’re genuine and authentic), and we trained to be the next top girl group.” Angela agrees, saying, “It’s different when someone is out there enjoying your music with you. Mas lumalabas talaga yung full potential mo as an artist (As an artist, your full potential shines through).” 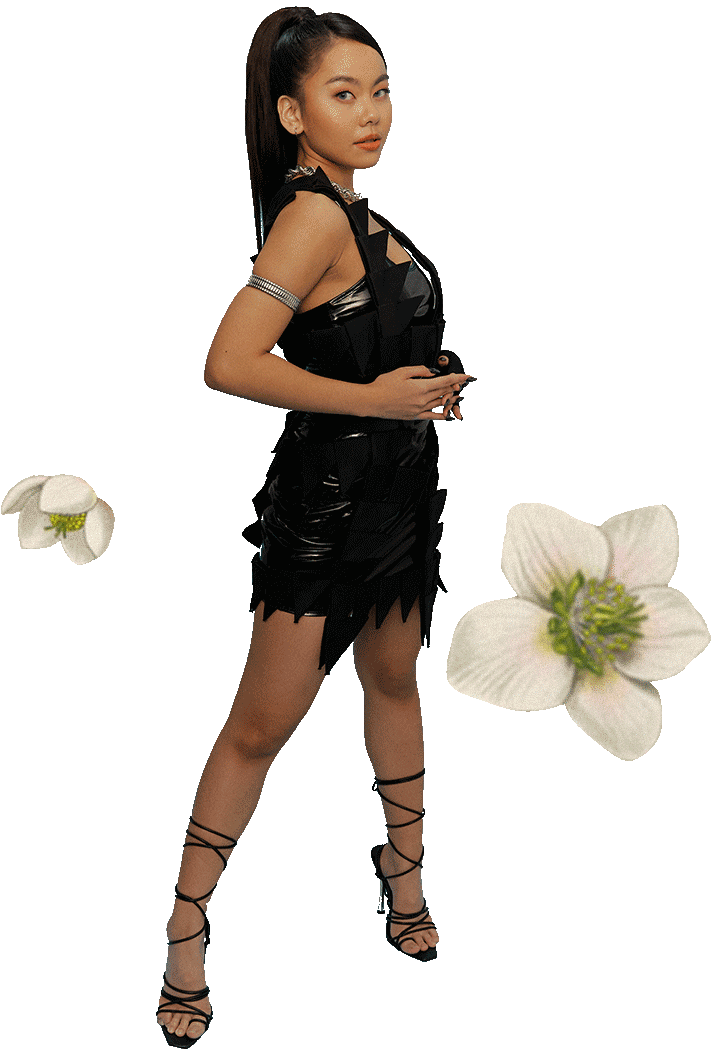 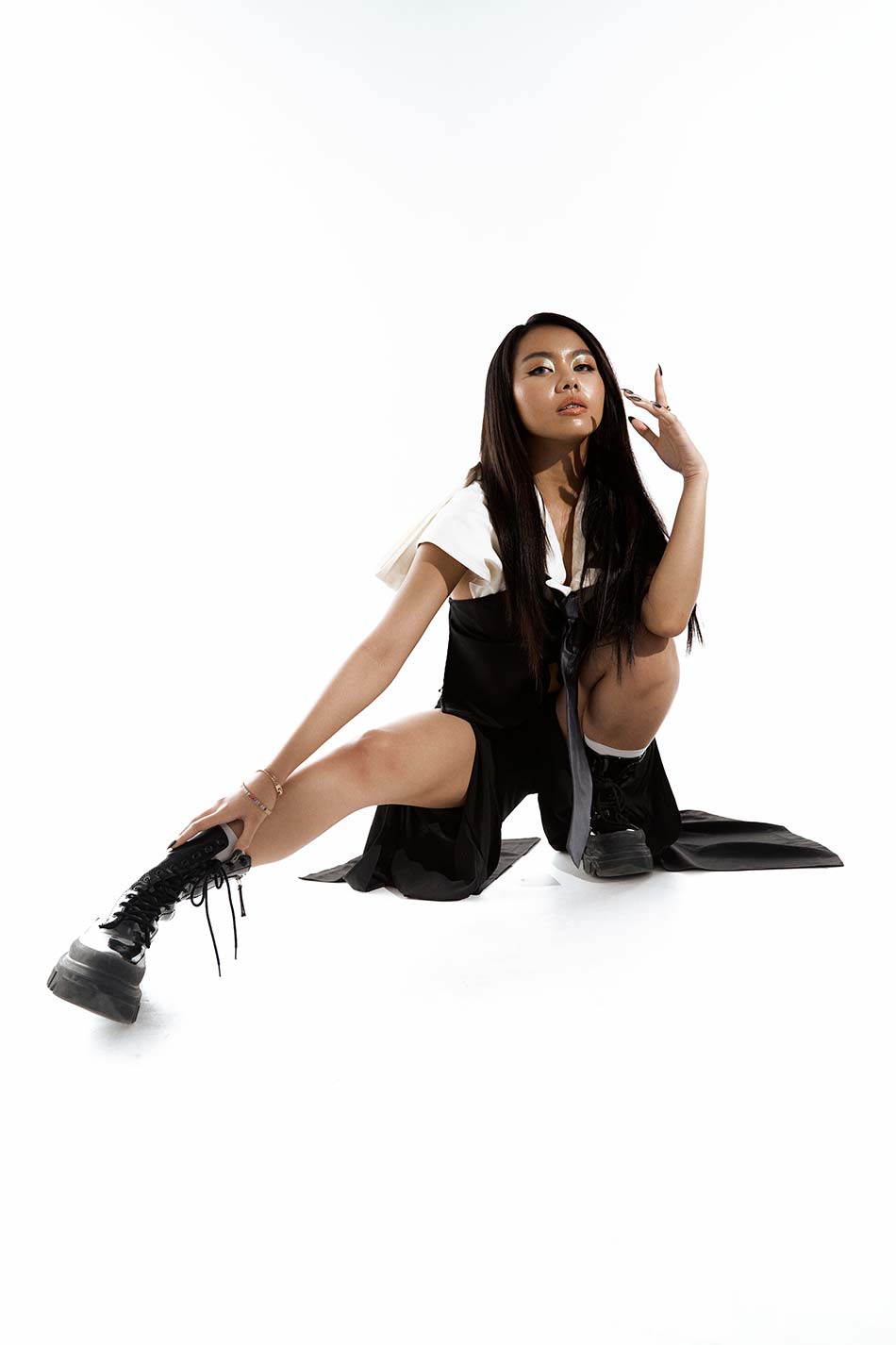 The litmus test for newbies in the scene is their first performance in front of a live audience, with no do-overs and the magic of post-editing. While training day and night for a virtual stage is one thing, there’s nothing like an exchange of energy that’s attached to a lively and receptive audience. A day after their official debut, KAIA faced the audience at the first-ever PPOP Con at the Araneta Coliseum. Naturally, the task of rocking a large stage and impressing an even larger crowd hung heavy in their heads. But as they proudly proclaimed, “KAIA is finally here!” to a sea of eager P-pop fans, they definitely passed this baptism of fire.

The girls received cheers and screams that they could barely hear themselves. Angela recalls, “People just enjoyed our music, and were there for us. Yung ZAIA pumunta talaga doon para mapanood yung first live performance namin (ZAIA really came to watch our first live performance).” Charice, meanwhile, can only describe the experience as surreal. She recounts, “We were surprised kasi kinakanta po nila yung chorus ng BLAH BLAH (they sang the chorus of BLAH BLAH).”

Of course, rare are the young and newly minted artists who can yell, “Good evening, Araneta!” a day after their debut. But through their high-energy performance, KAIA proved they deserve that spot on stage. And by extension, they have rightfully taken their seat at the table. 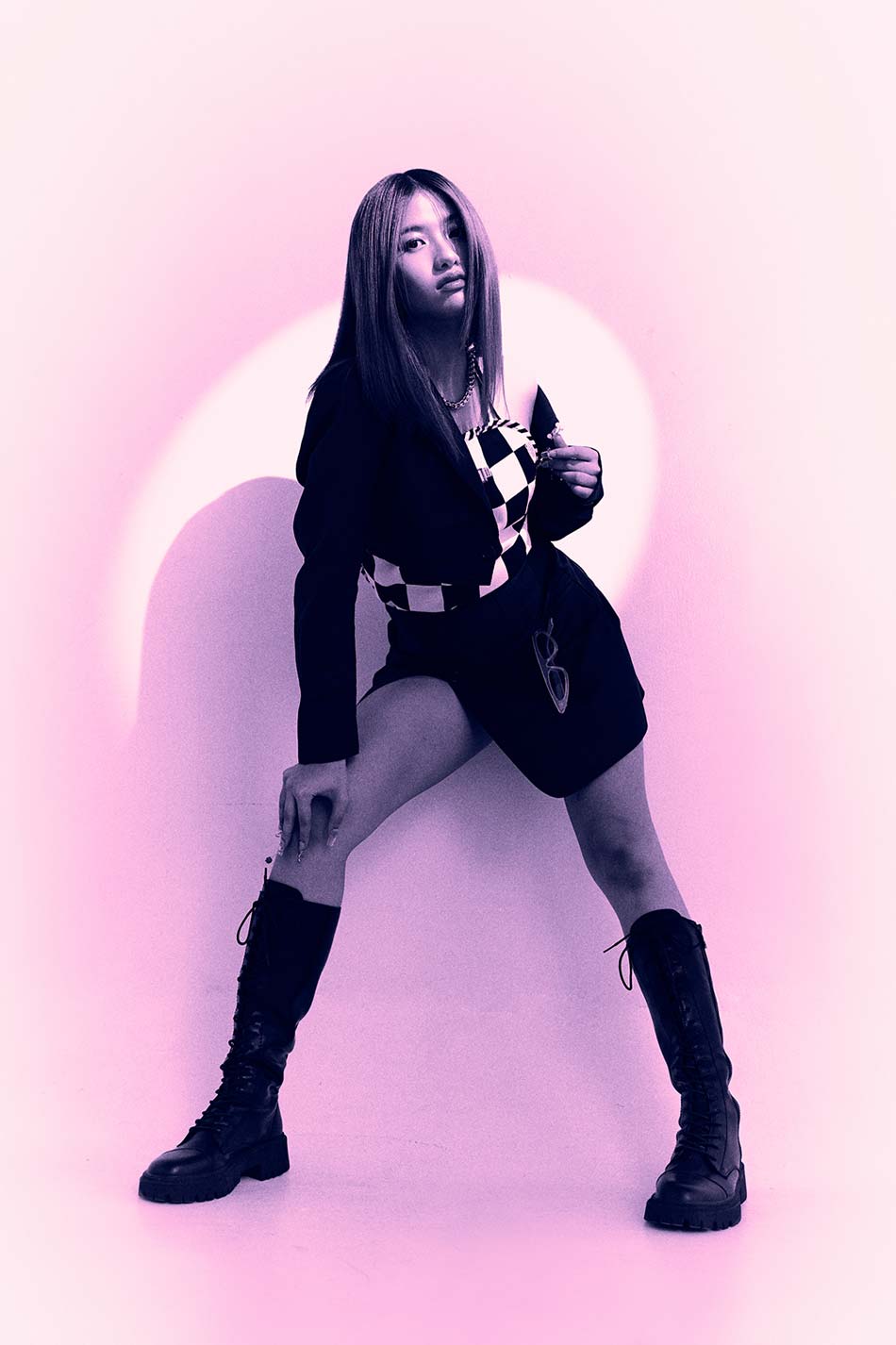 It’s been barely three months since KAIA officially debuted, and the girls have a long way to go. Angela, Charice, Alexa, Sophia and Charlotte know this, but they’re excited about what the future might hold for them. “Before our first anniversary, we want to, of course, expand our skills [and] to learn more,” intimates Alexa. “We want people to continue enjoying our music [and] to [make] more music; hopefully to have our own concert talaga.”

It’s something we can easily understand. As individuals, we know how much easier it is to converse when there’s a personal exchange of energy; imagine exchanging energies with thousands that sing your lyrics and shuffle to your choreography. 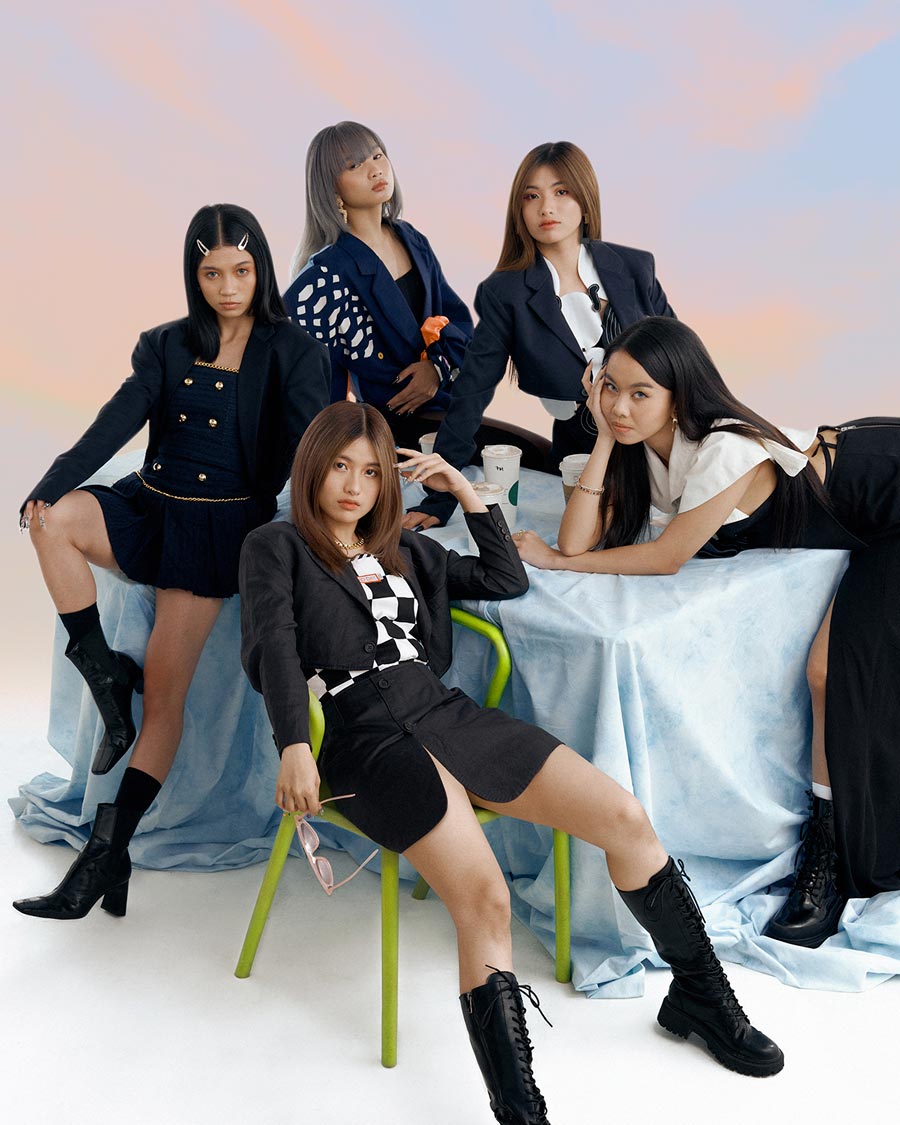 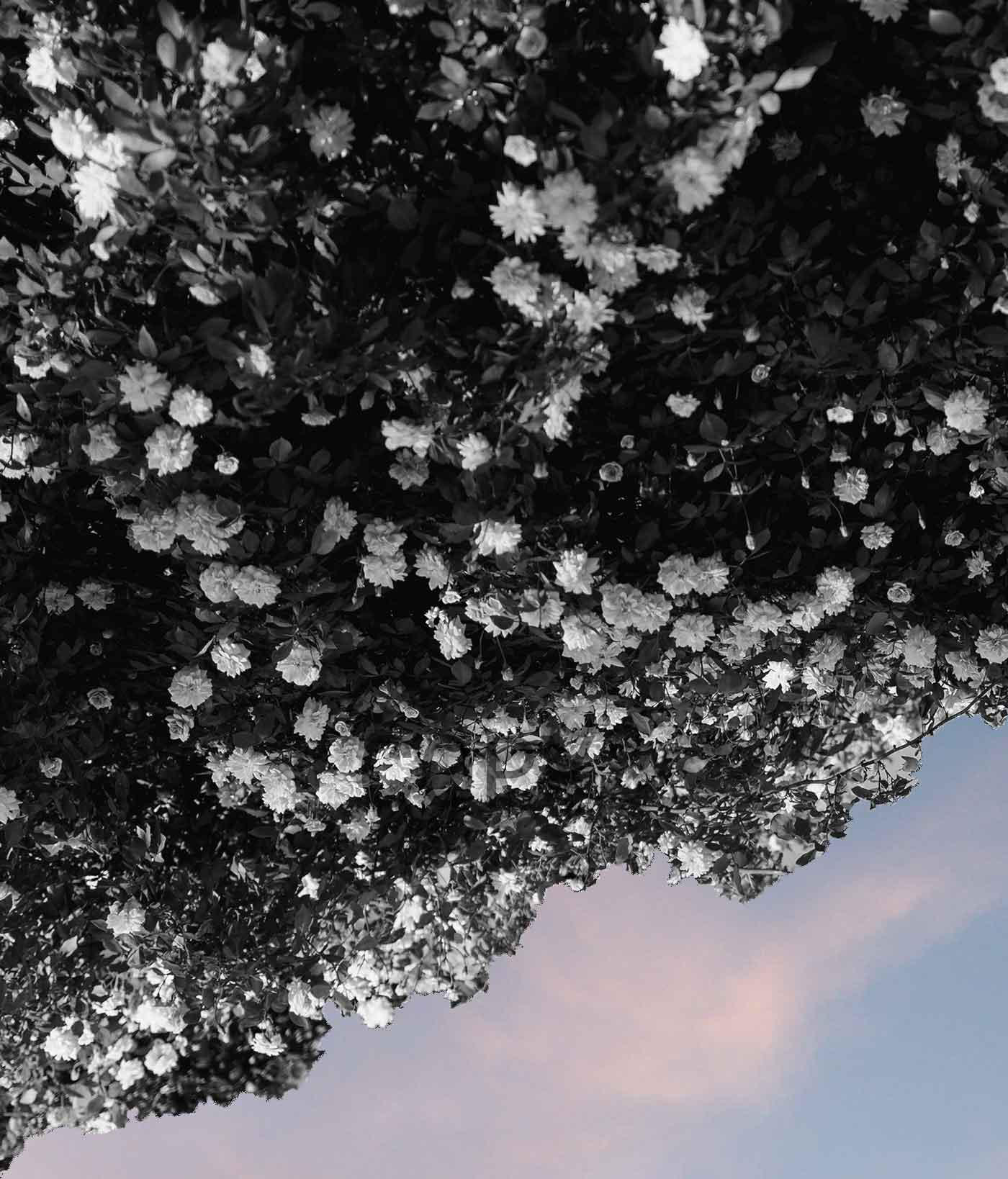 The success of KAIA is not just about their success. Each win is an open invitation to anyone brave enough to answer it. It doesn’t matter where you come from, what your style is or what tune you sing to. KAIA is here, but they are leaving the door open behind them. The girls—Angela, Charice, Alexa, Sophia and Charlotte—are eager to share the stage. After all, this world’s big enough for all of us.

Can A Polyamorous Relationship Work?

Your Ultimate Live Show Guide for 2022

There’s Nothing Exactly Wrong With Being Unlabeled…Right?