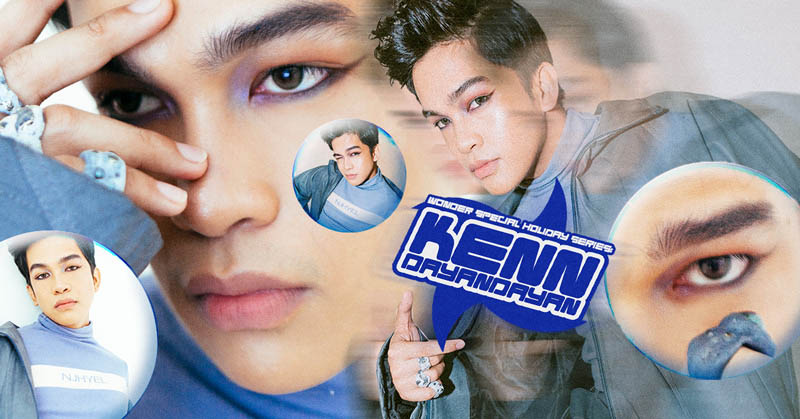 Kenn Dayandayan Makes the Case for Male Representation in Beauty

The endless blackhole of beauty certainly has a way of opening doors for young, unassuming creatives. With highly-addictive platforms like TikTok championing short-form content, some individuals find themselves becoming an overnight sensation. Such has been the case for Kenn Dayandayan, fondly referred to as “Kennnnito” by friends and followers.

The 22-year-old budol king has always loved the spotlight—whether he’s creating videos for his TikTok followers, hosting a gig, walking the runway or even starring in beauty campaigns. After auditioning for a reality TV show and not getting a callback, he put all his efforts into the short-form video and streaming app.

In an exclusive one-on-one, Kenn reveals how this discouraging rejection transformed into his much-needed redirection: “I’ve been on TikTok since 2020 but it was mostly for fun and entertainment. [I would follow] dance trends [and do] voiceovers. I decided to film a GRWM video, out of my frustration, after auditioning for a reality TV show because it didn’t work out for me.” He adds further, “I channeled my energy [into] TikTok. I felt like I had to make an avenue for me to still get whatever I wanted out of life—and TikTok gave me that.”

It was a simple video of him putting on natural makeup that catapulted him to become an overnight success. He even remembers the date: December 25, Christmas day. Kenn notes, “The next day, I woke up with five thousand followers on TikTok. I realized that this was going to be my thing.” It’s a tale as old as time for this generation’s creators (and consumers).

RELATED: Xiao Hong Shu (小红书) Is for the Girls Who Learned About Beauty Through the Internet

After consistently posting on the platform, he found his purpose for creating videos. He wanted to amplify necessary conversations on male representation in the beauty landscape in the Philippines. He envisions a localized version of Korea, where putting on makeup and having a skincare routine for men are considered norms, as if you were just brushing your teeth or taking a bath. Grooming, after all, has a lot to do with being hygienic and taking care of yourself.

Whether it’s teaching his followers how to double cleanse, how to follow a simple brow routine or how to use a tinted moisturizer for day-to-day, Kenn loves the idea that people get to see a male figure putting on makeup and following a skincare routine. He opens up to Wonder, “I took up that responsibility, although scary at first, because of the gender stereotypes that we have in society—but I felt it paid off naman, and it was worth it.”

He adds, “I was so overwhelmed by all the feedback I would get from people ‘cause I don’t want to just make videos that would entertain people. I also want to make videos that are purposeful, that people can save on their albums and look back on when they need them.”

Truthfully, he was more concerned about how his family would perceive his newfound passion for makeup. “I was mostly scared of what my family would say. But it turned out really well for me because they didn’t take it negatively. They loved the thought of me doing something out of my spare time. They didn’t really care about makeup at all, but they were more concerned about how I was maximizing my skills, my talents and earning from that niche,” Kenn shares.

Nowadays, even male figures in his family ask him for grooming advice. He reveals, “I have this uncle of mine who asked me about what skincare [he can use] and what he can put on his face when he has board meetings because he wants to look presentable.”

This was a lightbulb moment for the beauty content creator. Kenn notes, “I had this really amazing thought that people are really starting to adapt. We have to stop talking about it being a stigma. I’ve always talked about this on TikTok, to stop saying ‘Normalize makeup for men,’ because the more you say it, the more it becomes an isolated [stimulus], a topic that people can find taboo. We have to treat it like brushing our teeth or taking a bath—until it becomes a norm for other people.”

Though the journey has been tough, Kenn Dayandayan sees how Filipinos have slowly been adapting and have become more accepting with proper guidance and redirection. He notes, “We can’t always please or persuade everyone because we have different standpoints in life. I respect that. But we can also have a community that accepts men wearing makeup. I always say this: People are going to stare at you, make it worth their while.”

Starring and Glam by Kenn Dayandayan