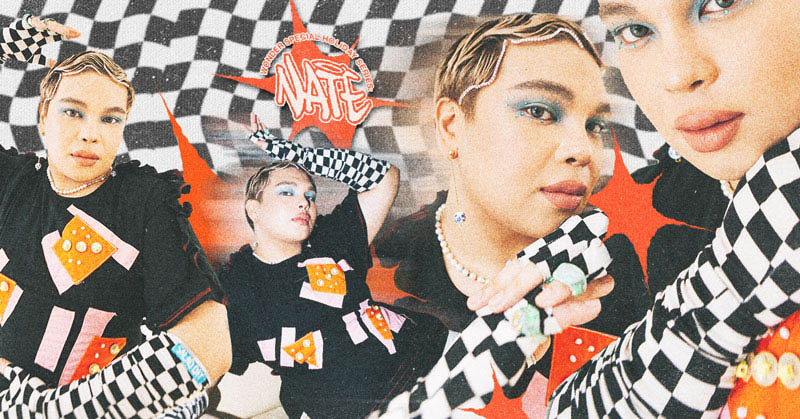 Nate Reveals His Brazen Approach to Self, Beauty and Social Media

From professional makeup artist to #BeautyTok expert, Nate tells all

Nate (AKA Miss Nate) and budol have become synonymous with each other. In his university years, the term “miss” much like “sis,” was generally used as a form of endearment, and it stuck. At the time, the all-around creative sported long locks; now, he’s sporting an unforgettable blonde crew cut, his signature look.

Beauty, we came to learn, runs in his family. Nate grew up with a makeup artist for a mother. He would draw inspiration from her work with clients of all kinds like celebrities and brides. But a turning point crystallized his lifelong fascination with all things beauty, many thanks to Mother Monster, Lady Gaga, who now has her very own luxe beauty line called Haus Labs.

RELATED: Beauty Expert Kai Javier Is Self-Made and Proud of It

Before short-form videos on TikTok dominated the ever-changing digital media landscape, Nate learned about makeup via the OG social network for beauty lovers, MakeupAlley. Beloved by both makeup enthusiasts and professionals, think of it as Reddit but solely for user-generated product reviews. At the time, e-commerce platforms like Lazada and Shopee didn’t exist, and you could only buy minimal brands in the Philippines like NARS, MAC and Laura Mercier. Most of the time, you had to pasabuy from friends or relatives who were abroad in countries where Sephoras are available left and right. Through the years, so much has changed in the local beauty landscape.

Nate reveals, “Du’n ko chine-check ‘yung mga makeup na gusto kong bilhin (That’s where I checked out the makeup I wanted to buy). Back then, there wasn’t a lot to choose from.” As a student, he would save up his allowance to buy makeup. He vividly remembers buying his first ever beauty product, which he still uses to this day—the MAC Studio Fix Powder Foundation. “It’s still in my kit. It’s very useful! Hanggang ngayon, maganda siya (Until now, it’s beautiful),” he notes.

For six years, Nate followed in the footsteps of his mom and trained to become a professional makeup artist. He notes, “[I’ve] done so many people’s faces, so many different skin types…[for] so many different situations—wedding, bridal, debut, prenup—lahat na-try ko na (I’ve tried everything)! I think that gives me an edge.”

Like many other passionate individuals who were given a platform during the pandemic, he started to gain a following on TikTok, but this wasn’t an overnight endeavor. With a lot of time spent at home, he dabbled in online gaming as a pastime, specifically DOTA. He got tired of it after quite some time and decided to download TikTok. At first, he would create comedy videos, then people started asking about his makeup process. Nate shares, “People started asking about [how I did my makeup], so I posted a contour video. That was the first video that hit it off! So [I realized], ‘Wow! I could do this!’ I could make [a video] again tomorrow.”

As a professional makeup artist, he has the knowledge and experience to teach people what looks good on them. But personally, he had some adjusting to do. He reveals, “The makeup that looks good on TikTok, it doesn’t always look good for shoots because it has a lot to do with the camera talaga eh. And the lighting that you use. With TikTok, [videos are] mostly shot on phones tapos natural lighting [or] home lighting…But in shoots, it’s such a different story.”

He adds, “It took me a while to realize that I don’t have to super perfect na perfect the makeup for TikTok.”

With the local beauty landscape, Nate is relieved that we are finally moving on from lip tints since “tapos na ang era ng multi-use (the era of multi-use is over).” With these “one-for-all” types of products being released left and right, which he acknowledges still works for many Filipinos, he likes the idea that more people are experimenting with makeup.

Nate loves that he can be himself and so many people can relate. But regardless of other people’s perception of him, he can stay true to himself. He firmly says, “I’m very brazen about my approach to social media ‘cause I really think it’s the only way to survive. To survive on social media is to be brazen talaga…very shameless…as in, ‘yan ka, eh. That’s you. So, ‘yan na ‘yung papakita mo (That’s what you’ll show). If they don’t like it, you have to be brazen enough also to accept na they don’t like you. But at least, you were true to yourself.”

Starring and Glam by Nate