Rob Gomez is more than Raf

Once in a blue moon, a film in the Philippine cinema will surprise you. Sometimes it’s the story, sometimes it’s the writing and other times it’s the actors who help make the narrative come alive. In more ways than one, Erik Matti’s A Girl + A Guy was a surprise on all fronts. Starring Alexa Miro and Rob Gomez, A Girl + A Guy is the story of—you guessed it—a girl and a guy as they traverse those years of life that shove lessons of love, compassion and choices down your throat. 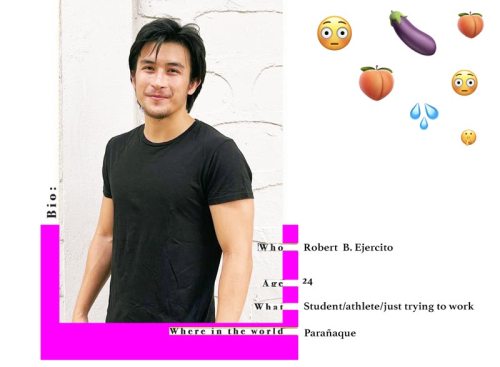 RELATED: A Guy + A Girl Review: Eerily Familiar Yet Uncomfortable

We had the chance to sit down with Rob Gomez one afternoon to talk about how he got to play the character of Raf in A Girl + A Guy, what he has in store for the future of his career and why he opted to drop Ejercito from his stage name.

Wonder: Can you take us back to the first moment you knew you would be part of the film? What was that like for you?

Rob: Actually, there was no “yes,” there was no “no.” I heard that role wasn’t for me; they were eyeing a guy—actually, they had a meeting and everything was fixed. But due to minor complications, my manager Dondon Monteverde, he called me up and talked to me for a bit. And I believed in him [and his] vision of my career: a very long and successful career; something that I can be proud of. So I just trusted him and auditioned—well, it was more of a reading. And then after talking to the director, Direk Erik, I met him a few years back, they gave me a script to read with them. The next thing I know, I was reading with other people, a different part of the script.

It was just like that, no “yes” no “no,” no pressure, no anything. It was really just a blessing from God.

W: It sounds like the role came very naturally to your career.

R: Well, no. Not really. I’ve been wanting this for a few years now. I’ve been trying with my own connections. Pero naramdaman ko na (But I felt that) if I try to use the connections, nothing is still happening. I’ve been through auditions, it’s been years. It’s been years. I guess the time just finally came. The opportunity presented itself, and I had the chance to take it. So I took everything.

R: Hopefully, hopefully. I hope that I gave a good performance. When I watched it, I was very judge-y of myself. There was some sort of self-fulfillment, kinakabahan po ako (I was nervous). But, other than that, everything went well. And the people were so nice. They were so nice for me.

W: We think you did well, and it’s your first feature role. But what drew you to the project? It’s very different from every other film that comes out in Philippine cinema. So what is it about A Guy + A Girl that reeled you in?

R: Actually, I got to read the whole script, the whole story. I was so intrigued by the suffering, by the problems. Because that’s life. Life isn’t all sunshine and rainbows, right? Once in a while, you get into a puddle, you trip, you fall down. But the best asset of a human being is redemption, which I think the movie showcased. How you grow up, adapt, accept the failure, and get hurt for a bit, but then the movie showcases you growing out of it. You’ve improved. You get yourself out in the world and find yourself, not trying to please other people but trying to fulfill yourself.

W: A Girl + A Guy tells a long story of Raf and Fiona that spans months. So was filming difficult, to portray that kind of character development? Do you see yourself in Raf?

R: With the character, he was very relatable to me. Nakakarelate po ako talaga sa lahat ng problema niya (I could relate to all of his problems). He gets hurt easily, I think I can say he’s kind of sensitive. I also related to every kind of struggle. The transition of girlfriends, of heartbreaks. Of course, I have been there; I have had my fair share.

He wanted a path, he knew how to do it, so he went for it. Right now, that’s what I’m trying to do. I know what I have to do, I know where I want to be, I know who I am. So I just want to be the best version of myself, towards my friends, my family, everything.

W: If you could give a synopsis of the film, specifically through the eyes of your character, for Raf, what would it be?

W: If we’re going to be subtle about it, A Girl + A Guy is a provocative film. Was that ever an issue for you?

R: May halo pong hiya (There’s a bit of embarrassment), but I treat it as a job more than anything else. I want to be as professional, as great, as anyone that is working. And I understand what’s work. I’ve been there. I grinded myself. May halong hiya, pero magmamatapang ka nalang (There’s a bit of embarrassment, but you just have to brave through it).

W: Let’s talk about you this time. You’ve been in headlines recently for not using the Ejercito-Estrada name, but can you tell us again why you decided to use Rob Gomez?

And we were talking about my mom; they know my mom. Sinugest po nila yung “Gomez,” napaisip naman ako (When they suggested “Gomez,” I thought about it). It sounds nice and it would be honoring my mom. And that was the perfect reason for me.

W: Can you give us other facts that might surprise the public?

R: I’m a really nice guy—okay, nice guys don’t say it! But there’s this misconception about me na I’m mayabang or maangas. Pero hindi po, siguro kung nagkamali ka sa akin. (There’s this misconception about me that I’m full of myself, but I’m not, maybe when you’ve done something wrong to me only). But every time I look at it, I’m a very understanding guy. I’m very patient, I’m very giving.

I love sports. I’m a really sporty guy, any kind of sport, but I have my major sports: football, ice hockey—so if ever I have a date, an ice skating date would really be a win for me.

W: What’s next for Rob Gomez?

R: Tito Dondon! Manager ko lang makakasagot nyan (Only my manager can answer). Pero what’s next for me? Like I said, I treat show business, more than anything, like a job. So I will work and grind every single minute I can to prove that I’m worthy of that role. But right now, that’s secondary to whoever Robert Ejercito is. I put myself in businesses with family and friends, so I invest myself there. I’m trying to make a business again of my own; I have a brand. After the film, I’m just trying to clean up my mindset and focus on me. I hope I will be in action films, get an independent film. To get a great cast. I would like to work with veteran actors who can teach me and inspire me.

Ladies and gents, Rob Gomez is here to stay. If my conversation with him proved anything, it’s this: He’s in it for the long haul, through the ups and downs

Catch A Girl + A Guy on UPSTREAM.