April is about Everybody and Every Body

As of this writing, Unique Torralba Salonga is 18 years young and like many from his generation, he has a lot to say. And yet—blame it on life’s mastery of irony—he’s infamous for being a man of few words.

Most of his photos are in black and white, his music relatively mellow and his lyrics hit like a bullet train to the heart. So while we’ve saved his songs on our Spotify playlists and read up on (and maybe even reacted to) the news that first announced his solo music career, there’s actually very little the public knows about UNIQUE.

Well, let Wonder paint you a picture of what an afternoon with OPM’s wonder boy will teach you. 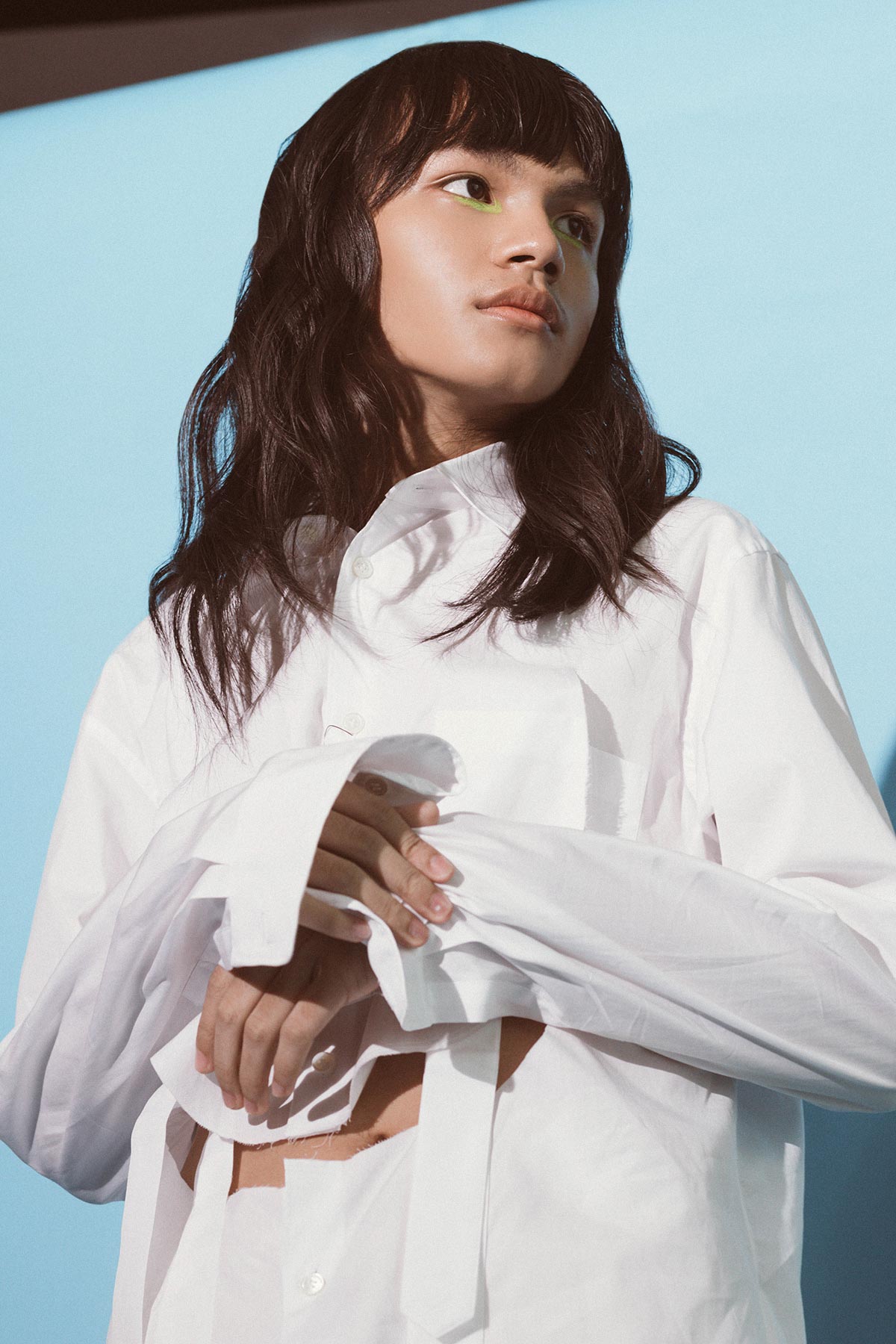 UNIQUE came as expected: dressed in black with hair in its signature lugay style. His age showed when he entered with his father in tow, not that we could blame him; who wasn’t awkward when they first broke the legal limit? You’d think maybe it would be someone who filled Kia Theater for his first solo concert, but apparently not—and this contradiction and unexpectedness was something that comforted us throughout the shoot.

To lay it all out on the table, UNIQUE’s previous run-ins with publications and his obviously quiet nature had us worried. Would it be a fun afternoon? Could we get anything out of him? We knew that the camera agreed with him—the striking angles of his face make sure of this—but could we show something more? Something followers of his brand of music hadn’t seen before? Could we paint a different picture?

We were all thrilled to quickly find out that the answer was yes.

I didn’t get to sit down with UNIQUE like I had with our previous cover girls; his management asked that the cover interview happen over email. Who was I, an introvert myself, to deny them this little comfort? So I stayed behind the camera, watched him put a smile on all of our faces and realized with surprise that all of our assumptions about him were wrong.

The direction was simple and UNIQUE took to it like a duck in water. He wore the clothes—some of which were not to his usual style (read: unexpected silhouettes, layers and color)—like a champ and posed for the camera.

His awkwardness was endearing and no one from the team was spared of his charm. We stood behind our photographer awestruck, as we audibly encouraged him to keep going. The word for the day was, to this writer’s embarrassment, pretty. Followed by equally impressive terms (more sounds, really) like ugh and yesss.

#SorryNotSorry, but we couldn’t help ourselves. UNIQUE in person is as entrancing as his music, albeit in a completely different manner. In fact, meeting him convinced me that he’s a jumble of countering expectations, not whom you bargained for exactly but not outside of this range either.

It became clearer and clearer that he was the perfect poster boy for April; Wonder is, after all, celebrating Everybody and Every Body. 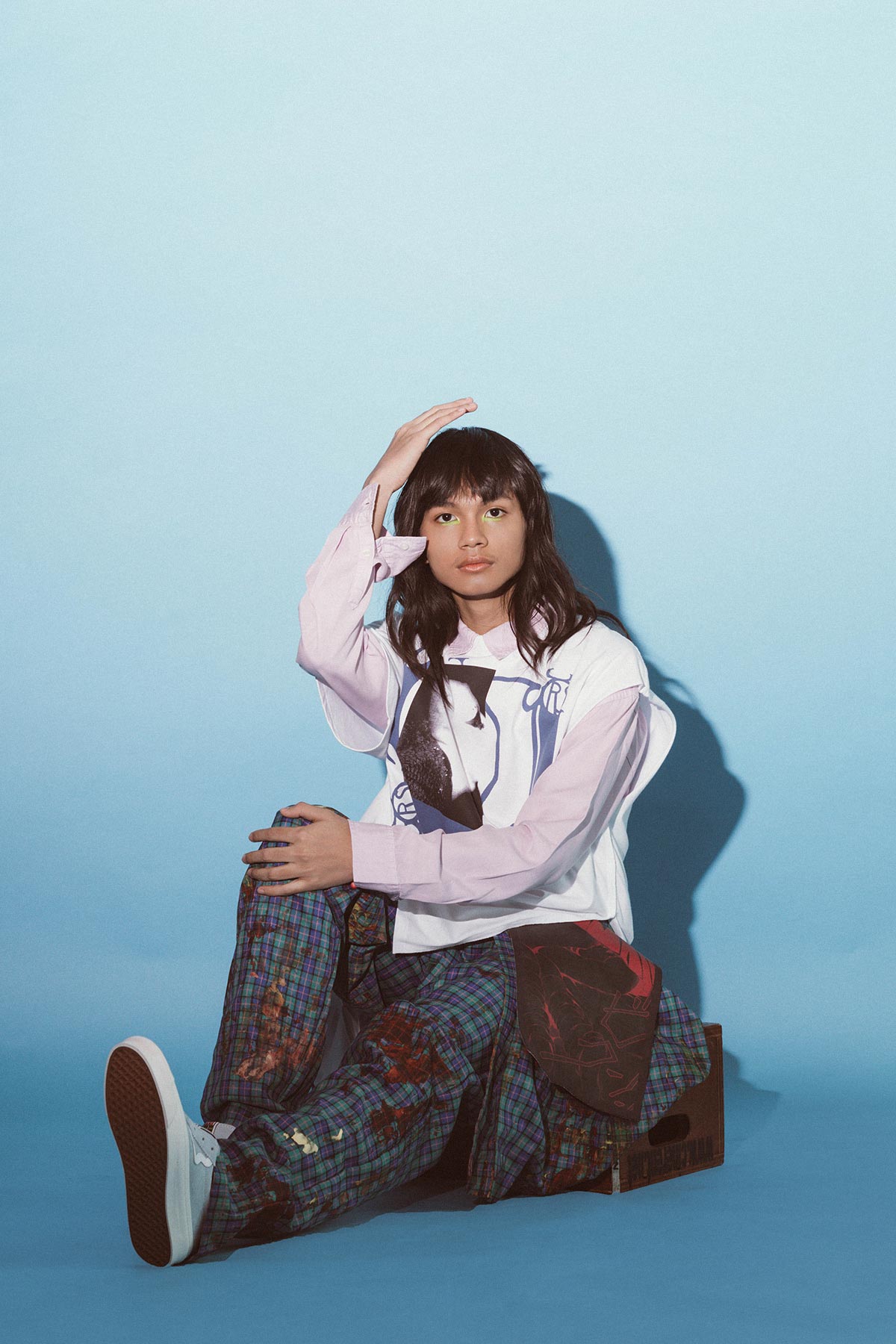 But hey, the show must go on (or shall we say traditions must be kept?) and it was time for our little on-screen play with words. To say that UNIQUE killed it would be an understatement. He was just genuinely himself, all witty and a little fidgety. Honestly, it made me wonder why he was so against a full-length interview.

So whatever did become of our promised little email exchange? Well, let’s just say that UNIQUE kept the week’s theme to surprising. His answers were brief yet full of meaning, delivering a figurative punch one after the other.

When you ask UNIQUE to say something about himself, his answer is straightforward: “Isa akong musician [at] songwriter (I’m a musician and songwriter).” Not exactly unexpected, but it’s still so refreshing to hear someone his age be so blunt about how he defines himself. Who among us knew what we wanted to do at age 18; who knew who they were?

Music is undoubtedly a big part of his life; he says this so much that no one can really refute his claims. But while most of us say that our career choices are second nature—second to snapping photos, manipulating worksheets and whatever else—the opposite seems to be true for UNIQUE; music is his first nature and everything else comes second. “[Ito ang] pinakamagandang way para i-release lahat ng gusto mong sabihin (Music is the best way to release whatever you want to say),” he says.

It hasn’t even been a year since UNIQUE left his former group, so it’s only fair to still be curious about the inner workings of his decision. Sure, his gamble has paid off big time, but why did he decide to do so in the first place, especially when IV of Spades was just starting to gain some solid traction?

“Dahil gusto kong maipakita ‘yung sarili kong artistry na walang kompromiso sa iba na kung saan ay na-eexploit ako (I wanted to show my individual artistry without having to compromise),” he explains. So can we blame him for making room for his own personal growth? Of course not; we can only wish we had his nerve. 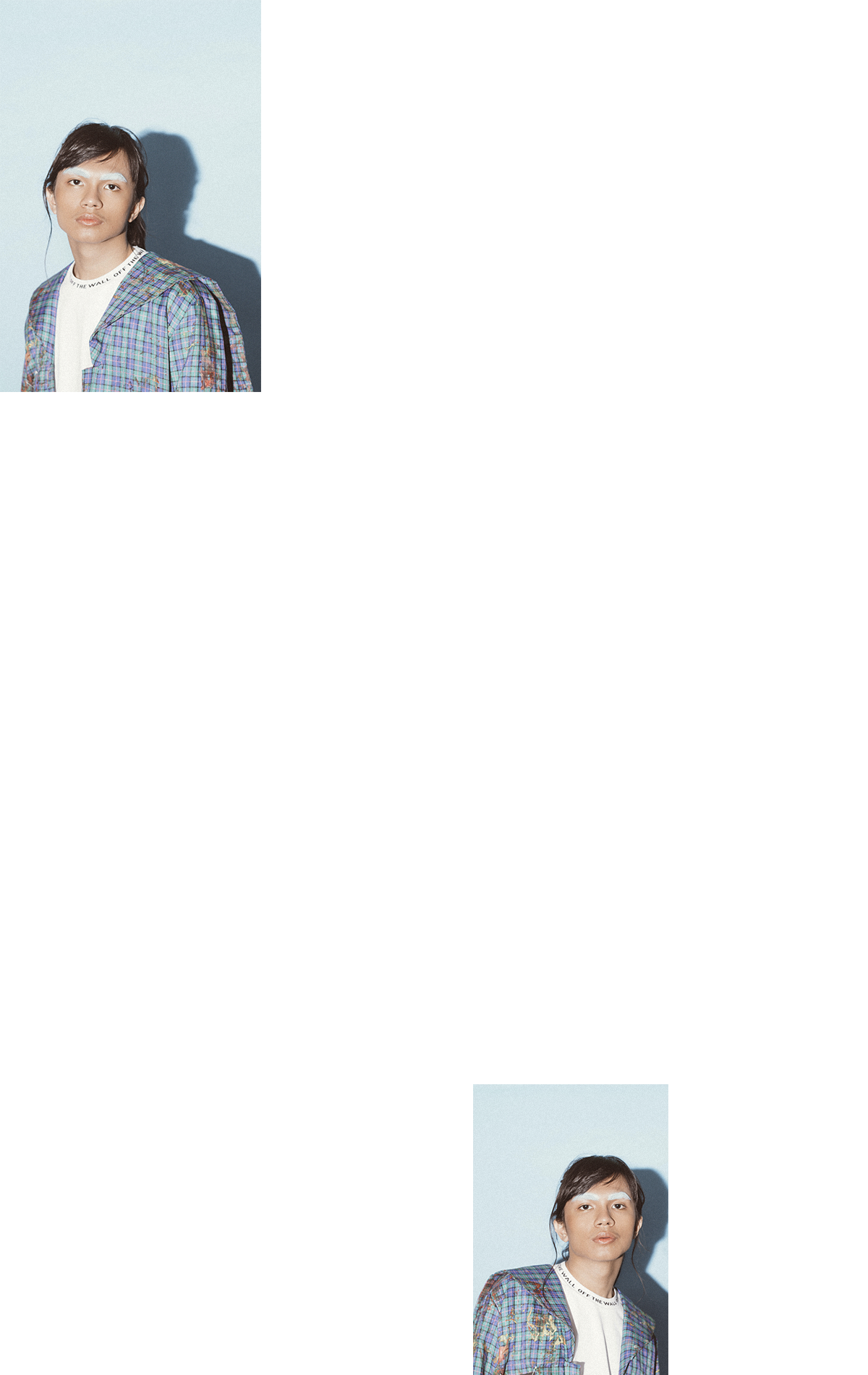 We know that he briefly stepped off the stage because he wasn’t willing to sacrifice himself, his style and his art. But with less than two decades of life beneath his bones, how could he possibly stick to it?

“Iniisip ko na lang na kapag palagi ka na lang mag-coconform, malilimutan mo na kung sino ka talaga (How I think about it is, if you’re always conforming then you’ll eventually forget who you really are),” he says, before catching himself and admitting he isn’t immune to the occasional doubt.

Easier said than done, but we’re here for this type of thinking. 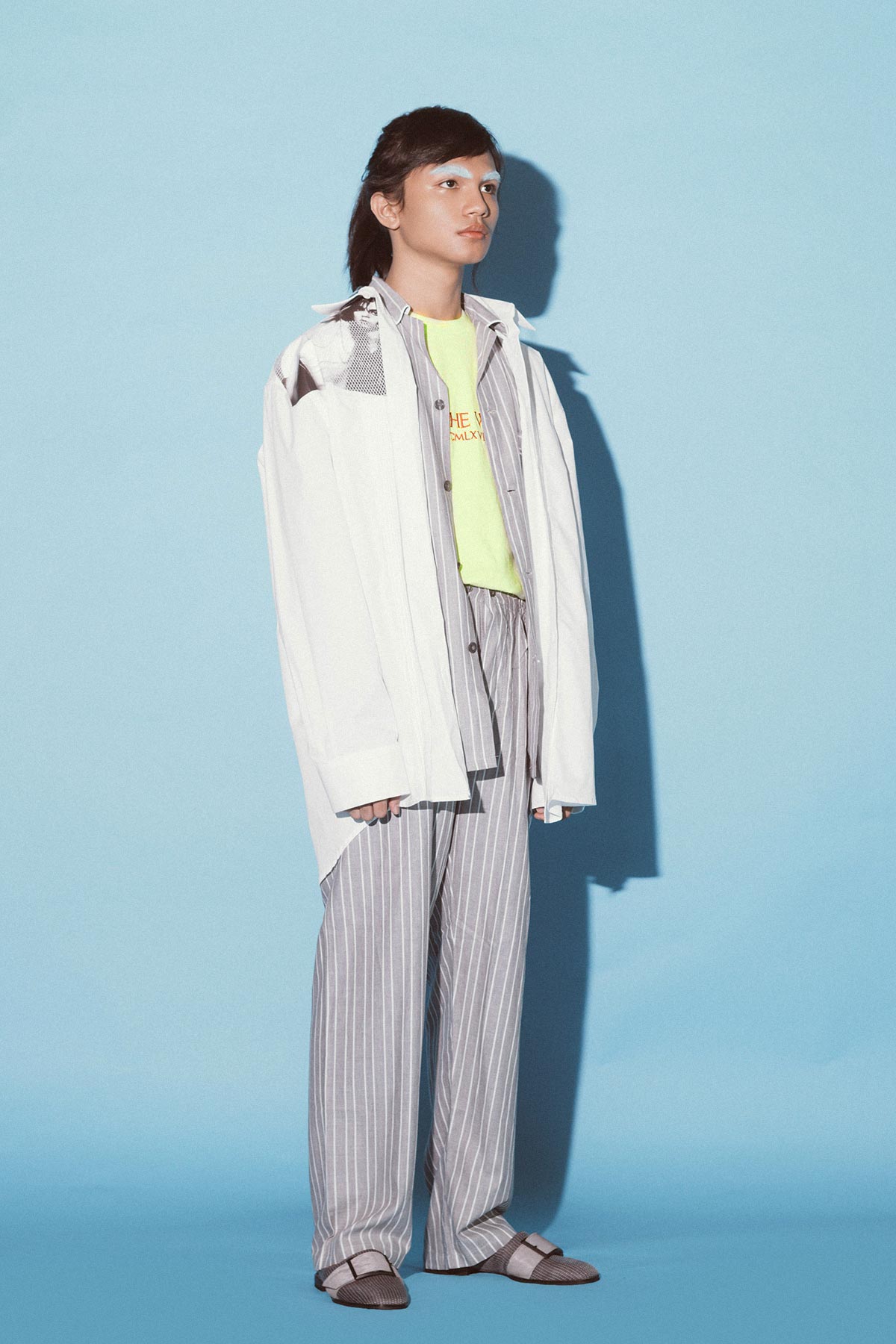 “Mas maluwag na sa pakiramdam [ngayon] kumpara sa dati na puro negative lang ‘yung na-aabsorb (The feeling right now is lighter as opposed to the negativity I used to constantly absorb),” he compares his life now to a year ago. And yet, there’s still so much that the coming years hold for UNIQUE. He’s working on expanding his body of work and picking up a few things beyond music.

Now, a new album from UNIQUE would be a gift, but to see his hand on something longer and something (arguably) more visual? Even if it was something in small scale, we can’t really help but revel at the thought. 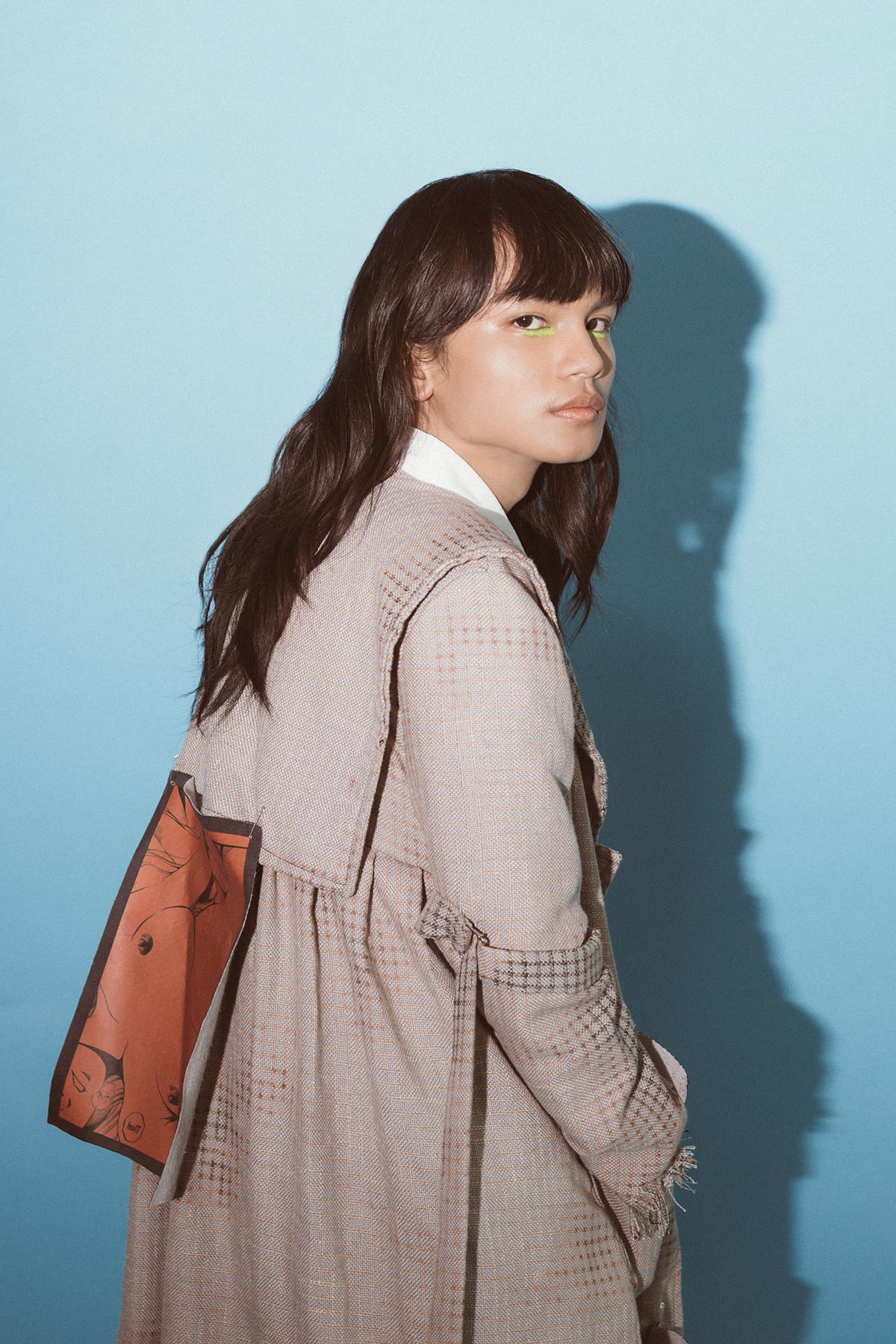 So you know what? You can have your assumptions and predisposed notions on UNIQUE; we did, too. But while you listen to his songs and hear him sing “Feeling alone/So I’m talking to the stars,” try to remember that he’s so much more than his black shirts, tailored trousers and quiet disposition. After all, everybody is one thing until you peel off the layers—and then they become unforgettable.

FOMO Comes with a Price: Excessive Spending Because of a Fear of Missing Out

QUIZ: How Well Do You Know Your OPM Classics?

Hair Cuts And Styles To Rock This Summer