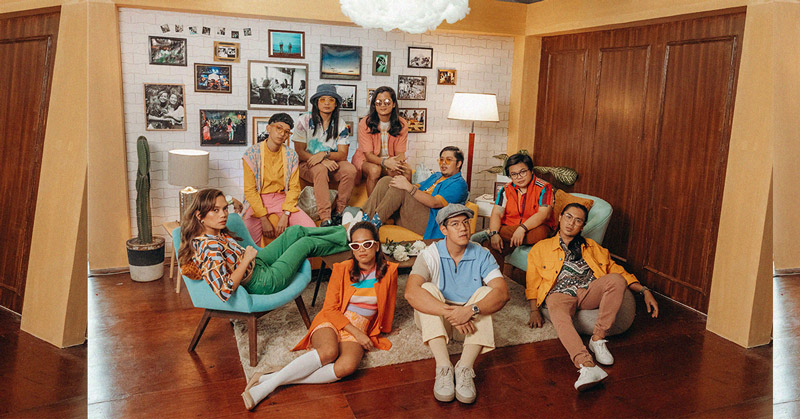 Pebble House, Vol. 1: Kuwaderno is a reflection of the past year

When we had the chance to chat with Ben&Ben ahead of the release of their sophomore album, we discovered that the ensemble’s values, authenticity and feelings pour over into their art. They write what they feel at that moment. Given that they’re nine in the group, there’s no doubt that they would come up with various messages and songs that could reflect what we’re thinking. We’ve heard it in their singles, in Limasawa Street and we listen to it once again in Pebble House, Vol. 1: Kuwaderno.

RELATED: Being Us. Not Deleting. featuring Ben&Ben

The album serves as a journal—a notebook, a kuwaderno—where each member of Ben&Ben pens their own entries, narrating experiences from when they stayed huddled together in their home, rode the waves and woes of the pandemic and sometimes barely scraping by. In a matter of 13 tracks, Pebble House, Vol. 1: Kuwaderno exceeds expectations in both sound and message, a welcome evolution from their debut album. Each song contains the distinct harmony of the band, yet they manage to switch it up at every turn.

Kuwaderno kicks off the record, a dreamy instrumental that bleeds into Kasayaw. True to its name, Kasayaw’s funky beat urges you to get up, dance and forget all care in the world. The lyrics are uncertain yet optimistic, talking about the push and pull of a hesitant lover while encouraging them to take the plunge. Swimming Pool with Chito Miranda follows it up, where the upbeat energy gets tapered down with a cheeky jadedness as they compare life’s realities to football fields and samgyupsal. Their sounds might seem a little far off from each other, but the two make an excellent combination as they bring us back to early OPM.

We wind down with Elyu, the track named after the surfing hotspot, La Union. This time, Ben&Ben recruits the help of Manila String Machine to translate the inexplicable need to move on into the song. After all, there’s nothing like taking a trip to the beach and letting the hurt wash away like waves and the strings make you feel like moving with the water. It becomes the perfect prelude to Pasalubong, a slow duet with Moira Dela Torre.

Ben&Ben approach a different kind of hurt this time around. One that is quiet, creeping and ominous. Magpahinga carries a reminder we often forget: to take a break even if we don’t deserve it. Along with Zild and Juan Karlos, they describe the feeling of drowning when our mental health declines with Lunod. It paints a clear picture of grappling at strings for sanity, the struggle and the high wall to climb as we try to survive. The drums and electric guitar chords mixing with Zild’s and Juan Karlos’s deep, raspy voices give off a feeling of victory, of rising above the chaos.

Instrumentally, Sabel featuring KZ Tandingan is the simplest. Yet their harmonies, KZ’s strong voice and the band’s body percussions commanded the listener to pay attention for those three minutes. You find yourself getting lost in Sabel’s story. Then we’re in for an upheaval, a complete 180-degree turn with Kapangyarihan. The production is stacked with aggressive instrumentals, just like Lunod. Coupling it with SB19’s punchy flows penned by Pablo, the track creates tension and forms an interrogation. It’s a compelling anthem that fights back.

After processing these emotions, Ben&Ben takes over the narrative and reminds us of our capacity to heal and move forward. Sugat, the powerful ballad featuring Munimuni, guides us to the first step of healing. They tell us, “Hindi ikaw ang iyong nakaraan (You are not your past).” They also remind us that happiness is a power we can choose in that process, as reflected in the exciting affection of Upuan and anticipation and longing wrapped in Ilang Tulog Na Lang. Pebble House, Vol. 1: Kuwaderno closes with Kayumanggi, a love letter to their own skin, their heritage. The track sounds like a modern kundiman, with a lullaby-like tune and guitar plucking that’s just dripping in adoration and passion.

RELATED: Unpopular Opinion: What Does It Mean To Be Filipino?

In a press event, Miguel emphasized that their most significant learning from working with a wide variety of amazing and beautiful Filipino artists is that “Our identity as Filipino music creators is so distinct, unique and beautiful to be shared.” This pride and artistry shine through in the record and I’m not even exaggerating. Ben&Ben and their collaborators simultaneously created a work of art that mirrors all the states we’ve been in, a universal validation and acknowledgment of what we’ve collectively been through when we get hurt, when we find a home and when we finally heal.