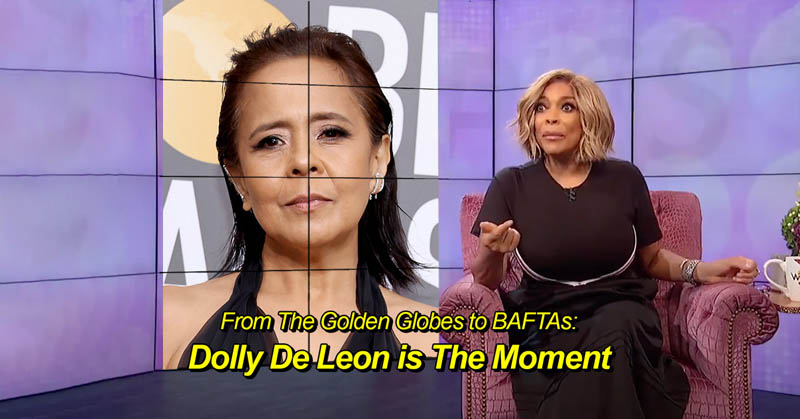 By now, everyone in the world has heard of Dolly De Leon. The 55-year-old Filipina actress has made waves after starring as Abigail, toilet manager-turned-captain of the bunch in Ruben Östlund’s satire, Triangle of Sadness. The film, which debuted in the 2022 Cannes Film Festival, won the highest award: the Palme d’Or. Without giving much of it away, De Leon’s scene-stealing performance as Abigail caught the attention of critics and award-giving bodies, nominating her alongside Hollywood mainstays.

In an interview at ANC’s Headstart, Karen Davila reveals that De Leon auditioned for the film without an agent back in 2018. “Ine-enjoy ko na lang yung audition kasi iniisip ko, ‘Di ko naman ‘to makukuha (I just enjoyed the audition because I thought, ‘I won’t get this anyway’), so might as well have fun with it,’” she explains. But despite her setting these expectations, things don’t go as planned. Dolly De Leon’s casting as Abigail turned out to be the best case in this scenario, especially after decades of securing supporting characters in the Philippine entertainment industry.

And for Supporting Actress ✨

Since the release of Triangle of Sadness, Dolly De Leon has received numerous nominations and awards for her performance. If you watched it, you would understand why. First, the Los Angeles Film Critics Association awarded her and Everything Everywhere All At Once star Ke Huy Quan “Best Supporting Performer.” Then, everything else followed, such as the historic nomination for the Golden Globes. Here, De Leon found herself alongside Jaime Lee Curtis and Angela Basset. “I’m proud to be representing a country with a lot of very talented artists who have so much to offer the world,” she writes to Rappler. “I find comfort in the thought that every Filipino is with me on this journey. And they are.” So despite the award going to the Black Panther: Wakanda Forever’s Queen Ramonda, the monumental inclusion of De Leon’s name and the recognition of stellar Filipino talent has made significant waves.

Dolly De Leon’s total award nominations for her role as Abigail round up to 21, four of which she bagged, including the Swedish Guldbagge Award for Best Actress in a Supporting Role. As of this writing, one of the biggest nominations on the list comes from the British Academy Film Awards (BAFTAs)—a title we hope she lands, too.

But along with raising our flag in the international film scene, Dolly De Leon steps onto the red carpet and blows us away. For the 2022 Cannes Film Festival, she poses with the rest of the cast in a proudly Filipino-made custom dress by Ann Cuatico. For the Golden Globes, she struts down the carpet in an edgy faux-leather AZ Factory dress and pulls up at the after-party in an oversized Del Core suit. And at this point, who hasn’t seen the iconic bathroom photo with Cate Blanchett? All these fashion serves just prove that—undeniably—Dolly De Leon is the moment.

RELATED: Young Filipinas Who Should Be on Your Radar

Everyone’s there for “Tita Dolly”

I SAID WE’RE ABOUT TO BE ANNOYING, NOT ANNOYED!!!! 😭😭😭 justice for tita dolly

While everyone bet that Dolly De Leon’s road to the Oscars 2023 would’ve been smooth, the Academy stunted those hopes and wishes. The body bypassed Dolly De Leon for Best Supporting Actress, despite Triangle of Sadness landing three nominations: Best Picture, Best Writing (Original Screenplay) and Best Director for Ruben Östlund. It seems odd that the Academy failed to recognize any of the cast members, actors whose performances made it the award-winning film that it is. Many went to Twitter and rallied behind De Leon after the snub, fondly calling her “Tita Dolly.” Even filmmaker Edgar Wright reacted to the news, tweeting that he would still write “Dolly De Leon” on his Oscars ballot.

RELATED: Things to Know About Dolly de Leon, the First Filipina to Score a Best Supporting Actress Nomination From the Golden Globes

Oscar or no Oscar, Dolly De Leon has managed to raise the flag for homegrown Filipino talent on the worldwide stage. And honestly? That’s more than enough to make her The Moment™. She has broken glass ceilings and torn down stereotypes through a single role, and we’re sure she’ll do it again while bringing us along for the ride.

On the horizon, Dolly De Leon has a special appearance in the new ABS-CBN soap opera Dirty Linen while also gearing up to work for two more Hollywood films. Until then, we’ll be waiting in our seats with bated breath for more of her performances. After all, that’s Golden Globe nominee, FAMAS Award and LA Film Critics Award winner Dolly De Leon to you.