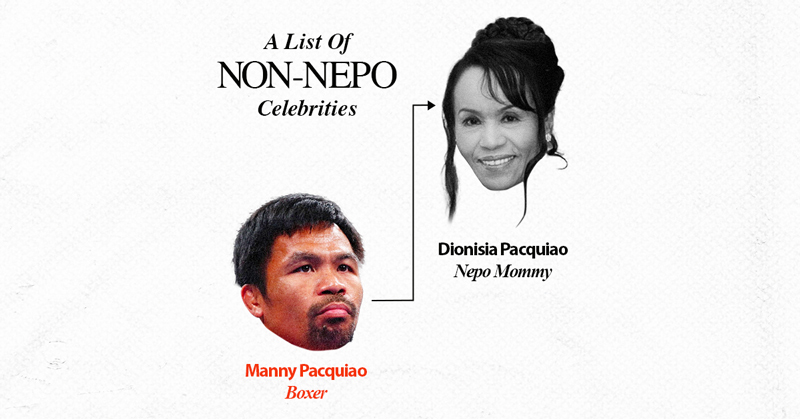 Are nepo babies all the rage? Instead, we present: non-nepo celebrities

Thanks to New York Magazine’s now viral and frankly incredible cover story, “nepo babies” have been making headlines all over the internet. You might be surprised to learn that your favorite Hollywood star is a nepo baby, or a product of nepotism, which is having wealthy and influential family members, whether in the industry or not. Through no fault of their own, these celebs have had an immense advantage and head start over their more modest peers. But not all celebrities are like that; there are many non-nepo celebrities who have actually had to claw their way to stardom and succeeded on hard work, sheer talent and good looks—or much of the time, all of the above.

Now one of the highest paid male actors in the industry, Leonardo DiCaprio has spoken about growing up in a dangerous LA neighborhood where drugs and prostitution were a way of life. Fortunately, he won a scholarship to a private elementary school and began acting shortly after, slowly building his way to stardom.

It might be surprising to many that the Sex and the City star grew up poor—with a family on welfare and bullied daily due to the stigma surrounding free lunches at school and some basic utilities being turned off in her family’s home. Often, her family didn’t even have electricity or their phone was disconnected for unpaid bills.

Oprah boasts a ~modest~ net worth of USD3.5 billion and an empire that makes her one of the world’s most influential women. However, Oprah grew up in crushing poverty in grassroots Mississippi. She was raised without indoor plumbing and was often a victim of physical and sexual violence. Eventually, she found work in a local radio station, a job that ignited her passion for media.

Jim Carrey may now be a household name, and he has been for the last 25 years. But prior to a role on In Living Color, a sketch TV show similar to Saturday Night Live, things were tough. At 12 years old, the actor was homeless and living in a van after his father couldn’t find work.

The superstar dancer, singer and actress was born to struggling Puerto Rican parents in the gritty Castle Hill section of the Bronx, New York. Jennifer Lopez attributes her success and natural discipline to seeing them struggle and work overtime to put food on the table.

Allan Pineda Lindo was born in Angeles City, Philippines, a product of an American military father and local mom. Raised by his mother, Pineda would make an hour-long jeepney commute to and from school, and helped his family survive by farming sweet potatoes, corn, sugar cane and rice. Through the Pearl S. Buck Foundation, an organization that finds healthier living environments for abandoned or orphaned American children, he eventually moved to the US with an adopted family. In high school, he met Will I Am, and the two would eventually form the Black Eyed Peas.

As a child, the boxer champion-slash-senator Manny Pacquiao moved to Manila and lived and struggled on the streets, taking odd jobs as a construction worker and often had to choose between eating or sending money to his mother. Pacquiao completed his elementary education at Saavedra Saway Elementary School in General Santos City, but dropped out of high school due to extreme and dire poverty.

Unlike her famous and sophisticated peers, Selena Gomez grew up poor and hasn’t been shy about talking about it. She recounts how her mother gave birth to her when she was in her mid-teens and worked multiple jobs just to support her.

The hip-hop mogul is nearly a billionaire, but reports say that he started life off in a grimy Harlem neighborhood where he had a paper route. His parents couldn’t even afford to buy him sneakers.

One of country music’s greatest stars who holds countless Grammy awards, Dolly Parton was one of 12 siblings in the rural mountains of Eastern Tennessee. She was raised in a house without running water, gas or electricity. She and her siblings slept on beds made of straw.

The renowned, award-winning actor Joaquin Phoenix came from relatively modest and unorthodox means, revealing to Playboy that he spent his childhood trekking through South America with his family as part of a religious cult called Children of God.

An immigrant born in Ukraine, Mila Kunis’s family moved to the US when the Soviet Union collapsed. Kunis has spoken about eating “ketchup soup” as a child when times were hard. She hasn’t been timid about her background and says that she “acted her way out of poverty,” starting with a starring role on That ’70s Show—alongside now husband Ashton Kutcher—when she was just 14 years old.

The eminent rapper has achieved incredible success in his career, but he is a completely self-made man. He was brought up in the rough and racially charged area along 8 Mile Road, in the mean streets of urban Detroit. Eminem would get into trouble as a youngster, often getting beaten up by his peers before eventually dropping out of high school and pursuing his rap career. The rest is history.

RELATED: The Unlikely Celebrity Pairs of 2022

Success might be success no matter how you look at it, but there’s a little extra something when you’re talking about those that made it from the ground up.