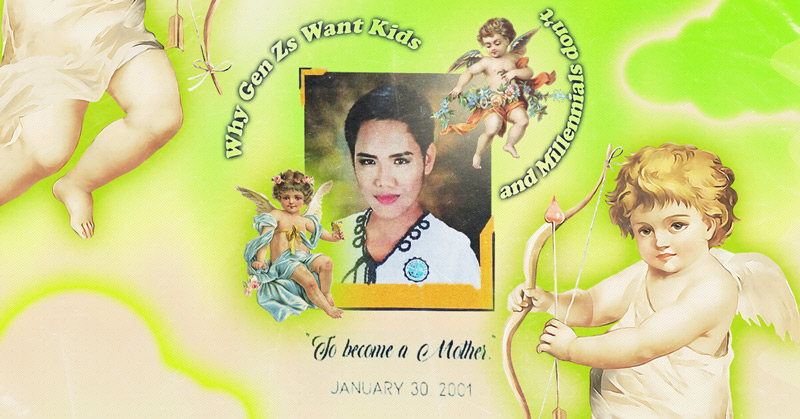 Gen Z and Millennials: do they share the same thoughts about parenthood?

In the 21st century, it’s easier than ever to meet someone online, fall in love and start a family. Yet, younger generations no longer perceive parenthood as a societal default—at least Millennials don’t.

While the consensus is that kids these days don’t want kids of their own, there appears to be some divide between Millennials and Gen Zers regarding parenthood.

RELATED: Modern Love: Here’s Why Young Filipinos Are Choosing to Cohabit Before Marriage

According to a recent DINK (dual income, no kids) survey, 27% of Gen Zers don’t want children. In comparison, 56% of millennials prefer a childless lifestyle. But why?

Throw in Gen Z’s entrepreneurial streak, higher financial literacy and better resources, and you have an entire group of people slightly less risk-averse than its predecessors.

So what does this have to do with having children? Well, children cost money—a lot more of it than Millennials are willing to sacrifice.

The Rising Costs of Child-Rearing

Unlike the far more Americanized approach that children only remain a financial responsibility to parents until the age of 18, it isn’t the case in the Philippines. In fact, it’s hardly the case for 20-year-olds, 23-year-olds and even 26-year-olds.

Keeping in mind the typical Filipino family-first mindset, being financially responsible for your child never ends. If we’re talking basics, the first year of child-rearing can set you back anywhere between P108,300 and P157,600! Couple that with an average monthly salary of P15,200, and raising a child seems near-impossible.

What Do Gen Zers Have to Say About Having Children?

Despite the numbers, many Filipino Gen Z mothers thrive in today’s always-on society. 23-year-old Gen Z mom Moira always knew she was destined for motherhood. Moira says, having grown up with seven other siblings, “I always loved having a big family.”

Despite entering parenthood with husband Marco mid-pandemic, Moira claims, “It felt like an indescribable force and strength was given to me. In the face of absolute newness and uncertainty, I felt so prepared.” The stay-at-home mom’s go-getter attitude speaks volumes about her generation and their ability to power through adversities, especially when challenged by older generations.

But what do aspiring Gen Z parents think? In a conversation with couple Nikos (22) and Andrea (22), who want kids in the future, both express awareness of the difficulty that comes with child-rearing. In particular, Andrea hopes to have children between the ages of 27 and 30, but knows to consider her “financial situation, relationship status and wellness” before making a decision.

Suffice to say, despite this generation’s supposed labor reluctance, it’s crystal clear that most Gen Zers are willing to put in the work before having children.

RELATED: Gen Zs in the Workplace: What Do They Really Want?

While the pandemic didn’t drop birth rates as many expected, Millennials aren’t about to turn things around. Even current Millennial moms are cautioning future parents. 26-year-old Millie is a single mom to a very humorous 5-year-old whom she refers to as her “sun child.”

After finding out she was pregnant at nine weeks, Millie had to make the difficult decision to go through motherhood alone. Now, despite finally finding her rhythm, Millie says that “given the opportunity…I’d want to be more prepared in all aspects.”

When asked if she’d want another child in the future, Millie said, “No, one is enough. Raising a kid isn’t as easy as our parents [had it].”

27-year-old Dianne (fur mom, not child mom) agrees, adding that “It’s important to consider [what] having a child will require from you and whether you are willing and able to provide [for] them.”

Dianne and Millie share the same sentiment regarding why they don’t want children in the future: it’s just too expensive. Millie adds, “Make sure you have a money pool before you even start [attempting] to conceive.”

Free time and space for hobbies are also recurring factors in choosing a child-free future. When asked how Dianne would prefer to spend her time without children, she says, “Taking care of my dogs and being with my partner and friends.”

Bridging the Parenthood Gap Between Gen Zers and Millennials

For Millennials and Gen Zers alike, the dreaded question from relatives at family reunions is inescapable. ”When are you getting married and having children?” Perhaps the focus isn’t on why it seems more Gen Zers want children than Millennials, but that both generations are alike in the ultimate factor influencing their decisions to have children: preparedness.

Marco says, “Kids take 60% to 70% of your time. Efficiency at work increases even more now that you want to get back home [quicker] to spend time with your kid.” In the same thread, Marco is one of the millions who believe parenting comes void of a manual. “The job is self-learned and definitely a challenging one.”

While even older generations might perceive child-free or delayed-parenting lifestyles as a missed opportunity, others view it as altruistic. Andrea says, “It takes a lot to bring [children] into a world full of harm. [It] may not be safe for them.”

For most Millennials and Gen Zers choosing not to have children, the reasons are simple—they might simply never be ready to have them. For those that want them, the ultimate deciding factor is security.

RELATED: Why I Still Want to Have Children Post-Pandemic

As the saying goes, times are changing, and so are people’s desires and aspirations. While there may appear to be a divide between Gen Zers and Millennials in the willingness to bear children, both generations share a comforting thought: all future parents should strive to be good parents. For most young parents, having a child is a blessing and, if anything else, laudable. At the same time, a self-sufficient and child-free life can be just as enriching.