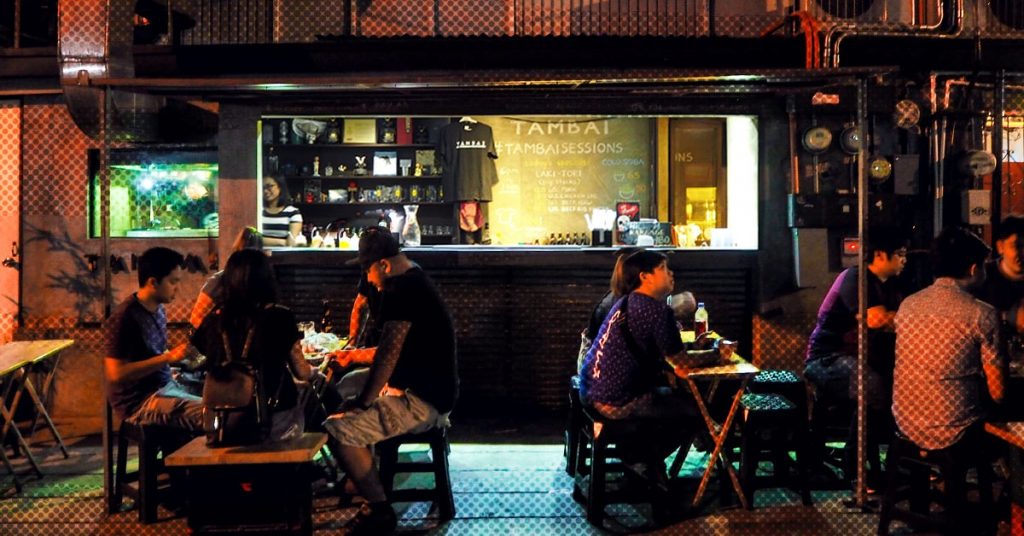 Nightlife Spotting: A Guide To Having The Best Time In Poblacion

For the extroverted and the introverted

It came almost out of nowhere, but Poblacion—once a relatively quiet residential area—is now one of the hottest spots in Metro Manila. Sure, there were always sleazy bars that boasted topless waitresses, midget boxing and cheap by-the-bucket-beer around its perimeter, enticing tourists and curious locals. But it wasn’t until a few months ago that Poblacion became a regular for locals, like me and my friends who come here literally every Saturday.

But how, with its bar-lined streets, do you choose where to go and what to see?

If you want good food

Because every good night starts with good food

It’s a small place with a relatively small menu, but Bucky’s Poblacion packs in a mean punch when it comes to taste and servings. Do yourself a favor and order the Fried Chicken and Mashed Potatoes, Grilled Cheese or Baked Ziti. Then finish off your meal with a signature soft serve (try the milk with crushed polvoron) or BuckyGato (espresso shot + soft serve ice cream + a bucky).

True story: “I’m there three nights out of the week. And no, I’m not sawa.”

The genius behind Ebi 10 is that most servings are ordered by the piece. There’s no need to pay a lump sum amount for six pieces of ebi tempura when you’re also looking to get some deep-fried veg in you. But while this might be enticing enough, it’s the flavor, texture and well-curated menu that will keep you coming. Just don’t miss out on the Jumbo Shrimp, Bird’s Nest, Stuffed Mushroom and Ika.

If you want chill drinks

Because no one wants to walwal every night Away from the now-standard noise of Poblacion is House of Joe, a humble bar below the brewery of Joe’s Brew, where you’ll need to time your visit just right to get a seat. But once you’re inside, it quickly starts to feel like home. The bartenders are friendly and eager to give you another serving of on-the-house popcorn and they might even let you DJ the music for a while. And if you aren’t into beer, they’ll whip you up something else; just ask for the High Joe.

True story: “Introverted friend said she could take the single-serve sake. She couldn’t. ‘Everything’s slowing down.'”

In true Filipino fashion, Tambai is located right on the sidewalk and forces you to sit on small stools with tables of the same height. But while you can get your standard beers to really fulfill that need to drink like you’re an extra in an old Pinoy movie, one up the experience and get yourself a serving of sake—with chicken skin as your pulutan.

If you want music to dance to

Because sometimes you just can’t help yourself Once the energy in Pura Vida starts its way up, there is no stopping it. The music will only get louder, the drinks will be finished quicker and the AC will start to fail. You’ll definitely need to step outside to the balcony to get some fresh air, but who needs much air when it’s the music that’s keeping you alive? (Just kidding; please keep your limits in mind).

If you want to socialize

Because you’re a social butterfly, obvs One of the staples of Poblacion is Wild Poppy, a second-story bar that starts the night humbly and always ends with fun-loving people happily exiting the space. It’s not the most spacious of places and bumping into people is inevitable, which why conversation gets rolling between tables and bar stools. How to get the ball rolling? Lambanog. True story: “I don’t remember their names, but I know I met them.”

For something a little more intimate, Kampai is the perfect mix between chill and sociable and the best part is that it’s completely dependent on you (and the amount of alcohol you’ve consumed). The live DJ will keep you awake, the drinks will keep you loose and the ambiance will have you hooked. Just be careful of the steps—they can be a doozy sometimes. Flats are definitely advised.

Poblacion has something for everyone and it becomes something to anyone that spends some time there. Who would have thought this three years ago?