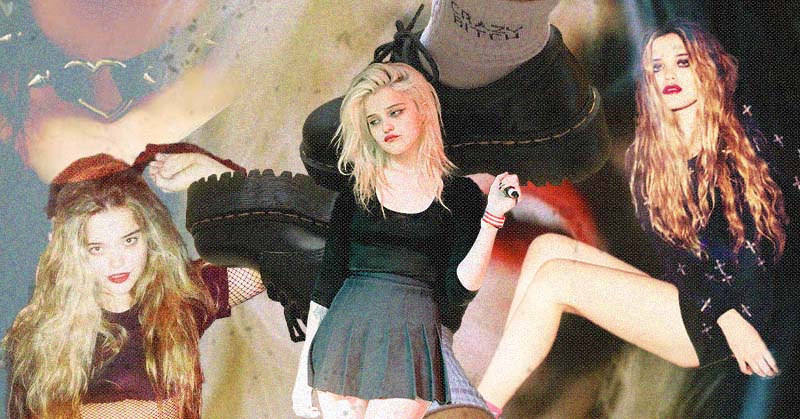 Is the 2014 Soft Grunge Tumblr Girl Movement Coming Back?

Siri, play Marina and the Diamonds’ “How To Be A Heartbreaker”

Let me paint you a picture. It’s 2014, and the songs in my iPod touch’s Top Played playlist were The 1975’s Girls and Lana Del Rey’s Summertime Sadness. At the mall, I make a beeline for Fudge Rock. Band pins, flannel polos and graphic crop tops pique my interests. I stare at a pair of holographic platform creepers before paying for the few button pins in my hand—Marina and the Diamonds, Arctic Monkeys and some random yin and yang pin—and pine for it like I was a star-crossed lover. I tried so hard to be the soft grunge Tumblr girl back then.

With the amount of time and energy I spent trying to emulate the perfect 2014 Tumblr girl whose music taste and evident sadness defined her entire personality, spotting key trends came naturally. So imagine my surprise when the internet slowly shelved the 2000s in favor of the early 2010s. Flannel polos, classic Doc Martens, stockings and tennis skirts populate my TikTok For You Page. While these so-called Tumblr girls no longer obsess over aliens and anything holographic, musical appreciation still takes shape through physical listening: wired earphones and vinyl collections. Maybe it’s the nostalgia-induced longing brought by the pandemic. Nonetheless, I’m not complaining.

TikTok might have dictated this trend’s re-entrance into the mainstream, but the revival of the soft grunge Tumblr girl aesthetic has been a long time coming. Pop culture icons and the fashion world paved the way for this resurgence, and it’s returned some 20 years after 2014. We break it down below.

@justinepllarena♬ Everything Is Embarrassing – Sky Ferreira

RELATED: Funky Pieces to Add to Your Retro-Modern Home

Perhaps the rise of pop punk into the mainstream expedited the return of the Soft Grunge Tumblr girl. In TV, Sex Education’s Maeve Wiley became the badass girl-to-be. With her pastel-colored hair, dark eyeliner, leather jackets and cigarettes—she feels awfully like a rehashed blueprint of whom the 2014 Tumblr girls wanted to be. Meanwhile, Euphoria’s Kat Hernandez, whose season one looks played with graphic tees, leather straps and clunky chokers, was reminiscent of the more daring side of soft grunge. Add a layer of internet fame through Tumblr and explicit fanfiction, Kat appears to be the spitting image of the girls we used to be in 2014.

The revival of broody, moody makeup

Bold eye makeup and dramatic smoky eyes ala-Skins’ Effy Stonem come full force. However, the 2020s favor dark and deep browns instead of harsh blacks for a more natural and subdued look. Dramatic glam looks constitute a soft buildup of browns on the lids and a swipe of black across the waterlines. Call it moody, broody, but not too heavy. Meanwhile, deep berry reds and matte lipsticks remain things of the past. Instead, hydrating lippies with MLBB shades stay the best ones to cop, rightfully offsetting the heavy situation up above.

Soft grunge can be considered gothcore’s young, rebellious child. This Tumblr girl is a little more liberal with colors, such as the bluest of denim and the deepest of reds. Pastel-colored hair is an additional plus. But the style’s foundation lies in basic cuts and neutral colors, which makes adhering to this aesthetic much easier than mirroring Y2K trends. We all have flannel polos, denim jackets and combat boots (or any chunky footwear situation) in our closets for any outfit. The fact that these items remain timeless sustains the trend’s longevity, especially since it also takes cues from the 90s—another timeless fashion era we love referencing.

RELATED: How to Dress Like Your Favorite Sex Education Characters

The thing about 2014-era Tumblr is that the sad, often dreary atmosphere allowed dangerous things to thrive. From the quest to appear skinny, pretty and Caucasian to editing our negative emotions onto cute backgrounds, there seemed to be a glamorization of mental health struggles in that space. So while the fashion was great and the music still rocks, maybe there are parts of our past we’re better off leaving behind.

Instead, let’s bask in the return of iconic 2014-era musicians, too. Acts like Sky Ferreira and The 1975 recently teased new music this year. If anything, that’s the cherry on top of this resurgence.