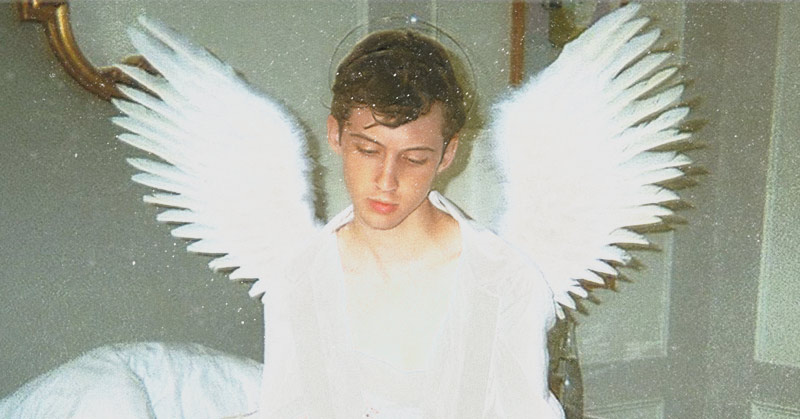 “Unfortunately for me, Angel Baby’s like a complete fantasy. It’s not reality.”

It’s been a solid few weeks since Troye Sivan released Angel Baby, a dreamy, synth-laden pop track he describes as a “gushy juicy doting adoring power b^tt^m gay ballad.” True enough, the track sends you high above the sky and drunk in love. It feels like soaring on a cloud trying to reach for something that’s slipping through your fingers. Angel Baby is a sonic cocktail that will make you pine for a romance so, so pure as Troye croons, “I need a love that will keep me safe. Pull me from hell, bring me back again.”

And much like all of us, he’s on the same boat, yearning for that kind of love.

“Unfortunately for me, Angel Baby’s like a complete fantasy. It’s not reality,” he expressed cheekily in an exclusive Southeast Asian press conference. “For me, it was a moment to allow myself to fantasize and remember how much I love love and remember how beautiful it is. It’s the ultimate fantasy of finding that person that just makes you wanna live in that moment forever and make time slow down.”

RELATED: Vance Joy Opens Up on Being Back Onstage and Busking in Melbourne

It’s safe to say that Troye Sivan has come so far from the young, wide-eyed YouTuber and into a fantastic artist. From the smashing success of Blue Neighbourhood back in 2015 to its well-loved follow-up Bloom in 2018, the Australian singer has charmed hearts and amplified queer voices with his music. Looking back on the changes he went through in his career up to Angel Baby, Troye said he feels more confident vocally. “Angel Baby for me was a new side to my voice that I felt while I was singing. I think it’s just about having a little more confidence in the process.”

Another lesson he picked up in keeping the momentum of his career is to “write stuff that you actually like because chances are someone’s gonna like it too,” he says. In an era where new and young talent comes in all the time, it’s easy to give in to the pressure and produce something that would please a larger crowd. But, Troye admits that “I couldn’t care less about the trajectory going up, up, up as far as numbers or anything like that. I just want to keep it exciting for everyone and myself and make stuff that I’m proud of.”

Of course, part of this would be the music video for Angel Baby. “Angel Baby love has been astronomical. And we’re just getting started,” he teased in a tweet. When asked about it, he describes it as “the same way the song is a fantasy, the video is a complete fantasy. It’s really a celebration of queer love in a beautiful, hot way.”

Since Angel Baby’s release last September, he’s been on our radar as he performed at Push To The VMAs, stunned at the Met Gala and walked at the Savage x Fenty Show Vol. 3. So what’s exactly is next for Troye?

“I’m always working on music, always, always. I was in a film that is all finished now, so we’re out to some film festivals and hopefully, that’ll come out next year as well. It was my first lead role in an American movie as an actor, which was very scary but exciting,” reveals Troye. “There’s lots of cool stuff that I can’t say but there’s lots of stuff on the way,” he adds, making us wonder what else he has up his sleeve.

While we wait for more music from Troye Sivan (and *hopefully* his upcoming third album), we’ll be daydreaming of the love we want to the soothing hum of Angel Baby.