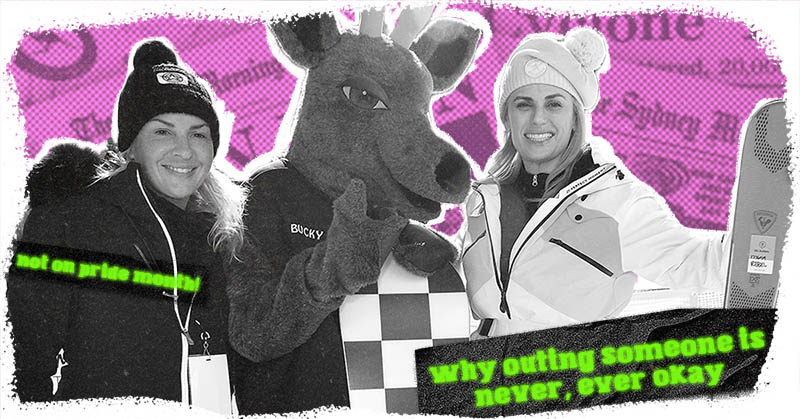 Why Outing Someone Is Never, Ever Okay

Literally, for whatever reason, don’t even *think* about it

Admit it—human nature forces us to view others’ relationships (sometimes, even lives) as spectacles for entertainment. Just look at the social media frenzy over Johnny Depp and Amber Heard. Even in our smaller circles, we talk about “who’s dating who” and “who broke up after X years” like headlines from the morning news. We put ourselves through the mental gymnastics of hypothesizing and looking for evidence, especially on blind items we receive from word of mouth or, for others, gossip news outlets. After all, there’s nothing like the satisfaction of knowing we were right. Yes, even if it involves the private lives of other people. But we all know that gossip always proves to be a problem, tearing relationships, friends and families apart.

Such is the case for actress and comedian Rebel Wilson. What was a proud memory to celebrate was tainted by an age-old issue. This month, she came out through an Instagram post, showing off her new love, Ramona Agruma. It reads, “I thought I was searching for a Disney Prince… but maybe what I really needed all this time was a Disney Princess.” Of course, everyone sent endless support and love to the actress as they all believed Rebel came out on her own terms.

RELATED: It’s Not A Party, It’s A Protest: The True Origin Of Pride Month

However, that bubble burst when the Sydney Morning Herald published a now-deleted article condemning the actress for “gazumping” a story about her new relationship. As it turns out, writer Andrew Hornery had prior knowledge of the relationship and hoped to publish an article on it. The gossip columnist claimed he “had enough evidence to publish” and  gave Rebel 27 hours to comment on the relationship. If you put two and two together, especially with Hornery acknowledging that his request for a comment came off as a threat, we could assume that this is a case of outing someone. (And on Pride Month—really?!)

Allow me to zero in on the common practice of outing someone from the LGBTQIA+ community. Different sources define “outing” as the practice of “public disclosure of the covert sexual orientation or gender identity of a prominent person.” But I would argue that it shouldn’t be limited to famous personalities. Even regular LGBTQIA+ people get outed. It’s pretty sad we still have to raise this conversation in 2022. But the fact that this had to be written means the conversation doesn’t happen often enough for it to stick to many.

Once someone gets outed, especially without the proper preparation, security and safe environment, it immediately puts them at risk. After all, society’s behavior towards the LGBTQIA+ community often plays around tolerance, and rarely acceptance. We all know that the world can be cruel to individuals who don’t fit the binary. Since the country lacks laws protecting members of the LGBTQIA+ community, offenses like these are often left persecuted. Legislation is yet to protect the community’s rights, hence the high risk they’re exposed to as it is. What more for a person who’s uncomfortable coming out yet—outing them may endanger them.

Aside from the material consequences, imagine the emotional and mental toll outing can bring others. Blatant disrespect can cause harm and hurt to the person, especially after violating their privacy and boundaries. The repercussions of broken trust and navigating unsafe environments can profoundly affect members of the LGBTQIA+ community. Let’s take NikkieTutorials, for example. In 2020, the makeup guru uploaded a vlog where she came out as transgender. But as it turns out, Nikkie de Jager took it as a move to reclaim her power from the threat of blackmail and being outed. Much like Rebel Wilson, the vlogger pre-empted plans of others to out them. Both women were strong to do so, but imagine the mental turmoil and pressure it has caused people who aren’t comfortable in coming out?

All the more, we shouldn’t proclaim someone’s truths ahead of them, or pretend that we know better than the person in question. Outing someone has a deep impact on one’s life. The journey to knowing what you like, your preferences and fully realizing your truth is a very personal one. Having privacy and trust violated can leave a highly negative mark on someone. So if there’s a particular person you know is queer but wants to keep it under wraps for now, respect that. Kill the thought of proclaiming their truths ahead of them and simply leave them alone. Because you’re not entitled to speak about their identity before they choose to.