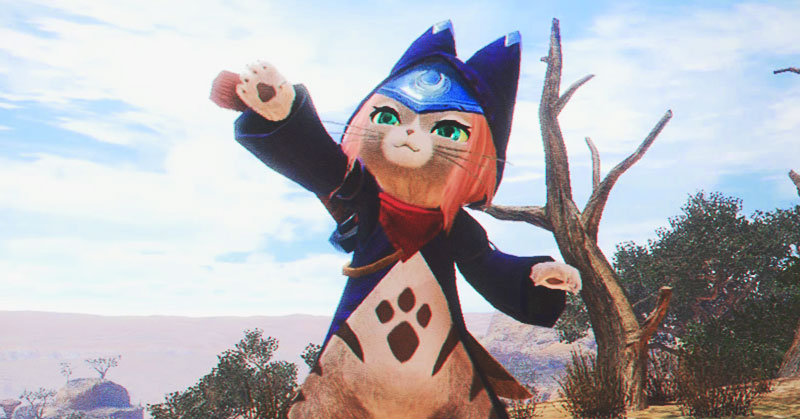 Monster Hunter Rise Is the Best Game You’re Not Playing

Monster Hunter games are pretty great, but here’s why Rise is special

Real quick, I just need to wind the clock back to 2020. We were all still acclimating to the dark mood that the pandemic gave rise to, our homes turned into armageddon bunkers against our will. To stay at home, get sedentary, and stave off boredom was the most heroic thing you do if you weren’t a medical frontliner.

So my PS4 made a hero of me. I was playing a bunch of Monster Hunter World, the latest (at the time) mainline game of the Monster Hunter franchise, before the Iceborn DLC expansion came in. MHW was my first encounter with the franchise, whose games are famously known for their steep learning curves, hidden mechanics, and controls that feel clunky for first-timers.

I’ve sunk nearly 500 hours into that game. And when I bought my copy of Monster Hunter Rise for the Switch, I jumped on that fast. As I write this, I’ve clocked in at about 147 hours of gameplay. I bought the game mid-April.

Monster Hunter Rise is the most entertaining, sanity-preserving timesink you’re currently not playing. And I’m going to prove it. We’ll talk about why Monster Hunter games are generally super fun to play, and why Rise is special. (For too long I’ve been stuck in this prison of loving a piece of media so niche that no one gets my references! That ends today!!!)

The elevator pitch for getting people into any Monster Hunter game is that it’s an RPG where you fight dinosaurs and make armor and weapons out of their body parts. Because all your opponents are essentially kaijus (monsters), every battle is a boss battle. Good stuff! But the real magic of the game lies in two aspects: its core mechanics, and its post-game.

Monster Hunter asks you to choose among 14 different types of weapons, which all handle very differently. Heavy weapons like the Great Sword and Heavy Bowgun hit hard but make you less mobile, while light weapons like the Dual Blades and Bow feel much faster, but require more precision and stamina management. The nuances of each weapon are so different that you could go through a slew of missions with one weapon, then pick up another weapon for the same string of missions, and it’ll feel like a different game. The flavor!

But weapons have very specific controls, with strict warm-up and cool-down animations that can make movement feel clunky. This isn’t surprising coming from Capcom’s fighting games, where animation frames make or break combat. So what you get then is a game that rewards not necessarily twitch reflexes, but decisive and intentional inputs that tactically take into account the moves of the opponent.

Speaking of opponents, it’s the monsters of the Monster Hunter franchise that give the game its heart and personality! In Rise, whose worlding is based stylistically on feudal Japan, you’ll find monsters inspired by yokai (supernatural beings), fire-breathing wyverns, thunderwolves, giant bats, creatures that border on god-like, and other manner of monstrosity that indicate a thought-out ecology. They all have different moves and ways of telegraphing them. And because this game doesn’t follow a EXP-based level-up system, battles become easier with literal experience. Hunting with your chosen weapon while learning the moves of a monster make you hyper-aware of the moves you make. That deep focus is hypnotic, and can keep you enthralled for literally hours. And “hours” isn’t an exaggeration—depending on your skill level, a hunt can take anywhere between ten minutes and close to an hour, it’s nuts.

RELATED: Dip Into the World of Customized Mechanical Keyboards

Those’re the mechanics, but what about the post-game? Let’s start with a definition of terms. The “post-game” is literally what’s left of the game that you can play after completing the main story. For most video games, the post-game is a little extra icing on the cake. For Monster Hunter, the post-game is when the real game begins. It’s like 80 percent of the content, and the post-game is sure to get bigger, considering how generous Capcom tends to be with free Monster Hunter updates.

Hunters who’ve followed the franchise since its early days speak of and praise the gameplay loot. Hunt monsters for parts, forge armor and weapons and jewels and charms, hunt more monsters for more parts to make all of those things. While it’s true that most post-game affairs are collectathons, the game has a way of hooking you into this cycle by constantly giving you new things to unlock and styles of combat to explore.

So why Monster Hunter Rise?

Because it’s an excellent gateway for people who are new to the franchise, probably the best. New quality of life features, better mobility (YOU CAN SWING AROUND LIKE SPIDER-MAN, KIND OF), and the portability of the Switch have made the barrier of entry lower than ever for newcomers. Also the score slaps. The best part is, the Monster Hunter community is full of veterans who know how intimidating the mechanics can be, and there are forums and video tutorials dedicated to making the learning process easier. And while Monster Hunter Rise has been experiencing a drought recently in terms of free updates, I think more new free content waits for us on the horizon. I swear to God, guys. Play this game.