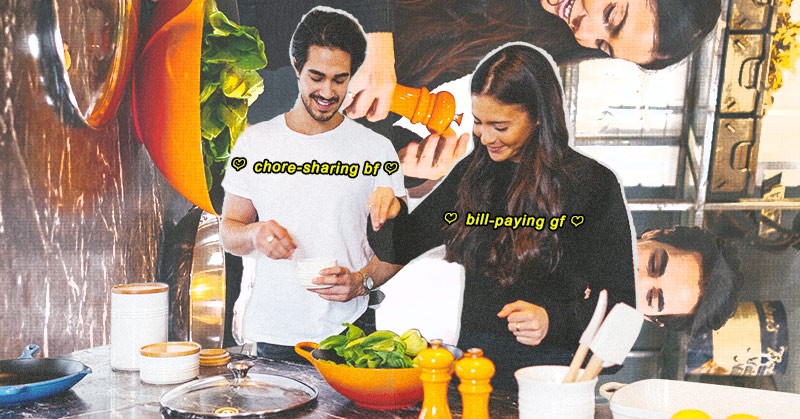 How Both Partners Win: Shedding Gender Stereotypes in Relationships

“Because we don’t put ourselves in boxes as a couple or as individuals, there’s more room to breathe, to grow, to be our best selves”

Not to preempt, but with the “ber” months here, 2022 is on our minds. It’s another year forward, also meaning another year further away from the milestones of gender equality cemented in our history. 84 years going on 85 since the women’s suffrage movement (Filipino women were granted the right to vote only in 1937). 35 going on 36 since the first female president of the Philippines (just one of two out of the 16). We’ve come a long way collectively. And if any Brad or Karen today said women can’t do what men can or vice versa, they’d be put in their rightful place.

All this progress aside, though, a closer inspection—into what being equal means to us on a personal level—tells us we still have a long way to go.

RELATED: A Relationship Expert’s Take on Modern Dating Trends and the Future of Dating

In our smaller, day-to-day interactions, there exist gender stereotypes that people, willingly or not, fall into. Men, crying is a sign of weakness; use force to reassert your dominance. Women, you’ll only feel fulfilled when you marry and have kids. As learned and progressive as we might already be, internalized gender expectations like these live on. And clearly, when it comes to our roles, evident especially in relationships, a lot of unlearning needs to happen, too.

Ahead, three individuals in thriving relationships explain how squelching these gender stereotypes has brought out the best in all of them. They, along with their partners, now rewrite the rules together. Equal say. Equal work. Equal commitment. Can’t really lose.

“We both genuinely believe it’s okay to say career comes first. That’s what works for us. We’re not going to bulldoze through relationship milestones just because of pressures to settle down.” —Me-Ann on her relationship with Renzo (together five years)

If I had a thousand pesos for every Christmas reunion where I’m asked, “Kelan ang kasal? (When’s the wedding?)” I’d be rich. Joking aside, I get through these reunions by seeing those comments as conversation fillers of relatives—the “threat” of my biological clock ticking and everything. But that doesn’t mean I don’t take each one as an opportunity to set the record straight: that I have my plate full as a medical resident. I’m in a happy, long-term relationship with a co-resident, who’s just as career-driven as I am. And right now, the pursuit of our medical careers, our dreams, is just more important than checking life stage boxes that couples are supposed to together.

It’s easy to think that in 2021, we’ve strayed enough from tradition, but I don’t think this is true. Renzo and I (but as society likes to play it, women get more of the pressure, so it’s really mostly me) are constantly asked about when (not even if) we’re planning to get married, if we see kids in our future. “Dapat by now, nagpla-plan na ‘yan ng proposal. Hindi ka ba kinakabahan na wala pa?” Mostly, the questions themselves are fine, except that some people—be it workmates, my parents at first, other relatives—feel the need to challenge our answers or ask us if we’re sure, like we answered incorrectly the first time.

The way I see it is that our plans as individuals (irrespective of gender expectations) are aligned. And together, on this path we’ve forged for us as a couple, they feel even more worthwhile to pursue. When Renzo took a year off before residency to take a breather, I paid for our dinners out. He’d cover when he could, dip into his savings occasionally, but as the one earning a steady income at the time, I was the who did the treating-out-to-date-night bit. Compromises like that never threatened his sense of masculinity, because I think he never shared the macho-provider, man-must-woo-woman view on masculinity. Played a huge role in me falling in love with him, to be honest.

Obviously, this setup may not work for everyone. But luckily, I’m not in a relationship with everyone.

“If there’s one thing I promised not to bring into our relationship, it’s the toxic mindset that one has to [yield] to the other, that one is superior to the other.” —Kren on his relationship with Hannah (together three years, living together a year)

Growing up, the immediate examples I had of men in relationships were my father, my uncles, my older cousins, and the way they conducted themselves in their relationships did inadvertently plant the seeds in my head about how men and women should be. This was that men were the providers and women support and follow the provider in the family. Gross, right? [Laughs] Essentially, I grew up believing men had the final say. This wasn’t to be challenged. Then when I stepped into college and had [a] subject called Gender Education, that was when I learned that the views I inherited were worth challenging. Little did I know that over the years that “old school” dynamic did take a toll on my parents’ relationship. They came to a breaking point that almost led to a separation. Here was my mom, a strong-willed woman who had her own ambitions, but yielded to her husband instead. A beacon, in other words, of what not to repeat when I eventually became an adult.

Now with Hannah, whom I moved in with during the pandemic, gender has nothing to do with how we establish our roles. We chip in whatever we can, whenever we can, and you back one another up through tough times. Literally, here in our house, our assignments depend on our daily workload. The one who cooks lunch, for example, is the one who isn’t stuck in a meeting at 11AM. The other does the dishes. It’s liberating going by your own playbook. Because we don’t put ourselves in boxes as a couple or as individuals, there’s more room to breathe, to grow, to be our best selves.

That kind of rewriting of rules, though, takes a lot of communication. So I see open dialogue as a huge factor in making our dynamic work. We argue, but we don’t fight. We argue to find solutions to issues or problems. And in that, we’re both equals. We both have voices. We both have a say.

“I didn’t want to fall into the clueless dad stereotype, where a man doesn’t know how to take care of his child when the mother is away. So when it comes to our baby, Emilia, we tag-team. We’re both very hands-on.” —Gian on his relationship with Lia (together three years, married a year)

My wife and I have met some fathers who wouldn’t—and just flat-out won’t—change their kid’s diapers. That’s something I didn’t see for us. Lia and I are both hands-on with our baby, Emilia. Being hands-on is something we know to be normal in other countries. But it isn’t so much here.

When Emilia was born, I was lucky enough to help Lia with our housework and tag-team when it came to caring for our baby. That was a great five months. We took the route of not hiring help during this period so, of course, the work at home on top of child-rearing had to be split between us. Getting down to it: designating things based on other people’s perceptions of masculine and feminine and what should follow after is ultimately inefficient when talking about a partnership.

We’ve seen relationships where, because couples unconsciously subscribe to gender stereotypes and roles, there’s tension and eventually resentment between the partners because one downplays the importance of the other. And that can easily translate into disrespect. In a way, it is. So, say, just because you’re a housewife and you stay at home every day, it does not mean you’re unproductive or don’t contribute. Quite the contrary.

RELATED: What Not to Say to Someone Who Just Came Out to You

It’s the era of the chore-doing BF and the bill-paying GF, where tradition and gender stereotypes ask why and we counter with “why not?”