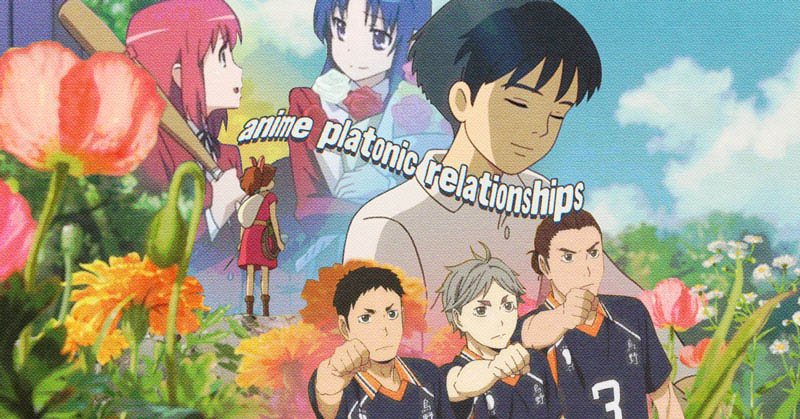 We said it: we love wholesome, platonic relationships

We all have that anime that wretched our hearts just like our first heartbreak. We’ve also spent countless sleepless nights on the edge of our seats watching action-packed anime. But in the middle of all of this lies slice-of-life moments in the form of platonic relationships, highlighting wholesome friend groups and feel-good narratives. To us, they serve more than comedic relief; our favorite anime wouldn’t be complete without them.

From making us go “awwww 🥺” to making us wish we had a friendship like theirs, here’s our list of our favorite fictional platonic relationships (anime edition).

We all love Levi and Hange for separate reasons, but we think that their platonic dynamic as a duo is underrated. As seniors of Attack of Titan’s ~main crew~ (AKA Mikasa, Armin, Jean and—no, we do not speak of Er*n), they’ve survived through a lot together to forge a deep friendship. Being the last few of their batch to survive, they’ve learned to depend on each other.

Sure, Levi’s hot for his skills on the field /and/ his obsession with cleaning (IYKYK), and Hange’s scientific prowess gives her an edge on the team. But nothing struck our hearts more than watching Hange carrying a decrepit Levi in season four, which you can watch here:

RELATED: Anime Movies That Will Have You Sobbing

If there was a platonic version of the enemies-to-lovers trope, this would probably be it. On the surface, Ami and Minori seem like total opposites, the former being unafraid to be a bitch, and the latter a goody two-shoes. In reality, Ami is the outward expression of Minori; she can read her like a book, and they clash because of Minori’s denial.

In episode 24, Minori finally comes to terms with herself, and Ami—not Taiga—is there to comfort her. She’s not her best friend, but her bluntness and maturity fill in the gaps left by Taiga, and we think that they balance each other out.

Ah yes, the backbone of team Karasuno. Though not as fiery and talented as the first and second years, the third years command authority with their leadership and well-developed fundamental skills.

Being seniors (and Daichi as captain), they appear high and mighty before the team. But the quartet’s dynamic reminds us that they, too, are still high schoolers.

Though we often see the second years fawning over Shimizu, we see the third years lower their guard in this scene:

Arrietty and Sho, “The Secret World of Arrietty”

We love Studio Ghibli for making the imaginary something so fantastical, but more so for their ability to make beauty out of the mundane. They make everyday scenes look alluring, and they bring in the same magic to friendships.

While there’s nothing like a Ghibli portrayal of young love (case in point is my personal favorite, Whisper of the Heart), they give platonic friendships the same charm. Arrietty and Sho’s doe-eyed innocence and exhilaration to meet someone so similar yet so different remind us of childlike friendship and simpler days.

We reminisce the end of high school days filled with polarized emotions; regretful of times coming to an end and anticipative of the unfolding future, of promised reunions and of keeping in touch.

Shirobako is the epitome of a wholesome platonic friendship. Former high school Animation Club members, Miyamori, Ema, Shizuka, Misa and Midori navigate the industry together. They hold their childhood and childlike dreams close, this time with more independence and responsibility. Let’s be honest—didn’t we all dream that we’d make it out together someday? We called it: the Jujutsu freshmen is our favorite anime trio. There’s just something endearing about a dumb-and-dumber trope, but having someone call the shots (in this case, Megumi) and keep up with them despite everything makes this trope even more lovable. The anime trio trope is a quintessential element in most series (off the top of our head: Naruto, Sakura and Sasuke), but Yuji, Megumi and Nobara are refreshing. Why? Because their relationship is purely platonic, and you can’t help but love them as a group.

If there’s a scene in the whole series that summarizes the trio’s dynamic, it would have to be this:

What characters would you add to this roundup? Let us know in the comments!