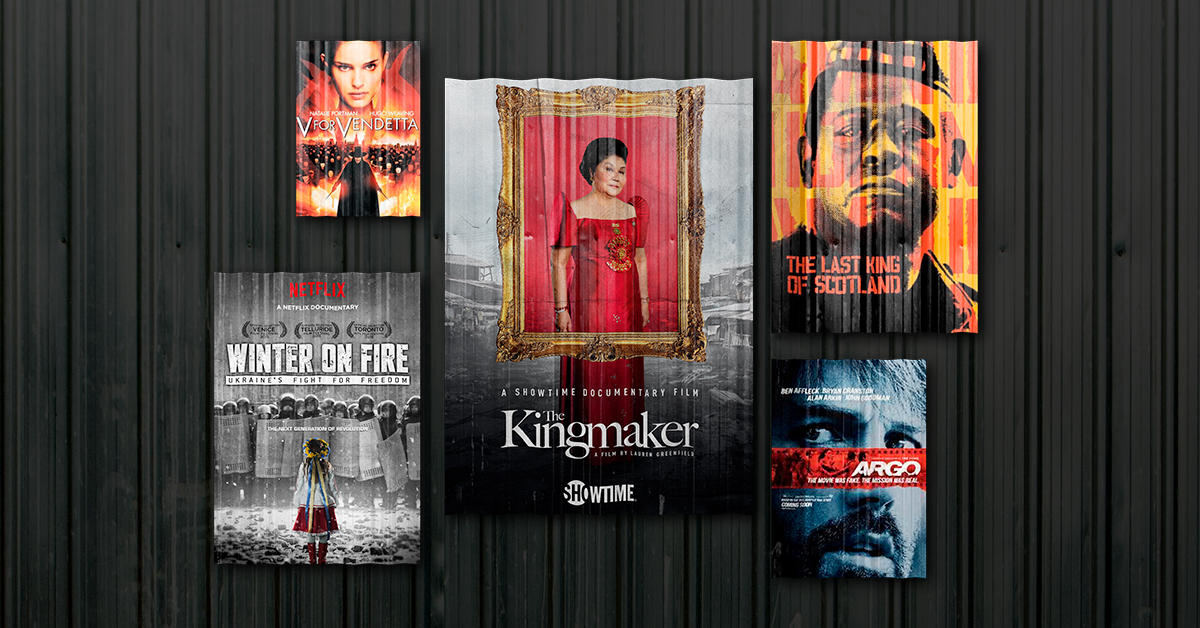 Best Political Movies to Watch Before the Election

With the elections coming, it’s time for some political movies

They say don’t bring up politics at a party. While this unwritten rule is seldom adhered to, it’s probably still a good idea. There is perhaps no subject as polarizing as politics; everyday, close friends and family members fall out over politically induced spats; exponentially even more “friends” are unfollowed on social media. But on your own time, there are no boundaries or social conventions. Want to get more political at the relative safety of home? From satire to biopics, the beauty of film is that they have always been an accessible and easy medium for expressing political ideas and social commentaries. There are countless political movies out there, but here are some of our favorites.

RELATED: Ahead of Election Season, First-Time Voters Speak on the Issues They Care About Most

Jim McAllister (Matthew Broderick), a respected high school professor, catches on that overachieving student Tracy Flick (Reese Witherspoon) who uses overly ambitious and unethical tactics to achieve her goals. When Tracy decides to run for school president, Jim, himself a deeply troubled but likable character, realizes the negative implications of her victory and convinces Paul, a simple minded but popular jock, to run against Tracy. When she learns of Jim’s secret involvement in the race, war ensues.

Set in the year 2020, V for Vendetta is based on Alan Moore’s graphic novel of the same name. The hero is a masked vigilante and revolutionary who fights to overthrow a fascist British government with the assistance of a female accomplice (Natalie Portman). The setting may be dystopian, but the political message of the film is universal and always has been.

It hit a nerve with viewers in the real world after its release; the emblematic Guy Fawkes masks worn by V are still often worn by protestors symbolizing resistance. It was written by the Wachowski siblings, of The Matrix fame. It is commercially entertaining but the political messaging here is bold and significant.

Sean Penn plays ardent American gay rights activist Harvey Milk, who in the late ’70s became a celebrity after establishing himself as the first openly gay person to be elected to public office in the state of California. Penn won Best Actor at the Oscars for this performance; and the film was intentionally released exactly 30 years after Milk was assassinated in San Francisco—the very place where he passionately fought against the bigotry and conservatism of his rivals.

The Last King of Scotland

Nicholas Garrigan (James McAvoy), is caught up in the sociopolitical mess that was Uganda in the 1970s. Idi Amin, the self-proclaimed President, was in power. When Dr. Garrigan visits on a medical mission, he ends up being hired by Amin as his personal doctor. Initially charmed by the so-called leader with his grand lifestyle and charisma, he eventually becomes aware of the suffering and oppression of the people at the tyrant’s hands. Forest Whitaker’s phenomenal performance as the Ugandan dictator earned him both a Golden Globe and an Oscar for Best Actor in 2007, as well as universal acclaim among critics.

This is a 2019 critically-lauded, documentary film written and directed by Lauren Greenfield, mostly featuring the political ascent of Imelda Marcos. It focuses on the Marcos family’s efforts to rebrand the family’s image, to return to political power (including her attempts to see her son Bongbong become President of the Philippines), and the relationship that Bongbong and daughter Imee Marcos cultivated with Rodrigo Duterte to win the 2016 Philippine presidential election. Plenty of candid interviews from both sides of the political spectrum are featured. Rumor has it that the filmmaker Greenfield wanted to create an objective portrayal of the decades-long Marcos political reign and not outright vilify the clan. How did she fare? You decide. It’s currently streaming for free on a number of platforms, including YouTube.

RELATED: The Kingmaker: What Is It Really Telling Us?

Daniel Day-Lewis received an Oscar (well, of course he did) for his depiction of President Abraham Lincoln during the Civil War as he struggles with the idea to end slavery. Directed by Steven Spielberg, the film gives an insightful glance at not just one of the great American presidents but how politics were handled at the time compared to the present day.

On November 4, 1979, radicalized militants stormed the U.S. embassy in Tehran, Iran, taking in 66 American hostages. In Argo, we see six American diplomats manage to sneak out and seek refuge at the Canadian ambassador’s residence. Aware time was running out before the refugees are located and probably killed, the U.S. government calls on extractor Tony Mendez (Mr. Affleck to the rescue!) to save them. Mendez’s plan is to pose as a Hollywood producer scouting locations in Iran and train the Americans to act as his “film” crew. Notably, this film also gives insight into America’s less than scrupulous foreign policy at the time, as well as it’s grave implications.

This timely Netflix documentary is an emotionally moving piece about the unrest in Ukraine in 2013 and 2014, as student demonstrations supporting European integration grew into an all-out violent and bloody revolution calling for the resignation of President Viktor F. Yanukovich, a Putin and Russian puppet who reneged on major campaign promises. Trust us, this is powerful stuff.

RELATED: We Vote Because We Love: Reasons Why Our Votes Matter

We only have a few days left until #Halalan2022. What do you want to see in our country’s future documentaries?