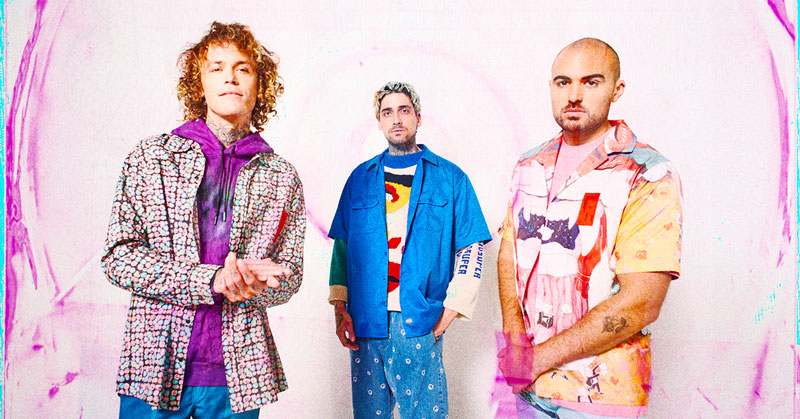 They say three’s a crowd, but in the case of DJ trio Cheat Codes, made up of Matthew Russell, Trevor Dahl and KEVI, they make one hell of a team. Since their early mixes with Spinning Records and breakthrough with No Promises featuring Demi Lovato, Cheat Codes continue to shake up the electronic dance music scene. After all, Matthew, Trevor and KEVI have their own influences and personal projects—all of which contribute to making Cheat Codes’ distinct sound. So they celebrate their debut album with a bang—dropping three installations that amount to over 30 songs through Hellraisers in just two years.

Hellraisers comes in three installments, with each member at the helm. From pop and hip-hop to rock and EDM, each album explores the individual flavors Trevor, Matthew and KEVI contribute to their addictive sound. Each member shows off their true musical colors while creating an extensive discography. We can hear in Hellraisers that the process flexes Cheat Codes’ production muscles while bringing something new to the table. From party anthems, feel-good songs best for long drives to tracks that help you forget your worries, they have it. If anything, Cheat Codes proves that while music genres exist, one shouldn’t regard them as limits.

Up ahead, we play catchup with Trevor Dahl and Kevin Ford of Cheat Codes and explore their journey in creating Hellraisers.

Wonder: Each of your installments for Hellraisers leans toward one genre. You did pop for part one, hip-hop and a dash of rock for part two and house or electronic dance music for part three. What made you guys want to segment each installment as such?

Trevor Dahl: There are three of us, and we all like different influences and wanted to show our personalities this way. [We wanted to] show what we’re capable of doing with production and not stay in the box. It was an idea that we had when we first started, actually, and when we started the process of making this album when the pandemic hit. So instead of just making one little body of work, we decided to make three.

W: So, it was a more natural direction for you guys?

TD: Yeah, exactly. We’ve always wanted to blend genres and work with different types of artists and create something special that way. So, when we had the idea of doing something with alternative rock, dance and pop, it called out to us, so it felt natural.

W: Speaking of the pandemic, making music and art for the past two years became integral to many of us because it helped us cope with hard times. Did it feel the same with you guys, and did it ever influence how you made Hellraisers?

Kevin Ford: Yeah, I think so! We worked on a lot of the album during the pandemic because we had so much free time. So I guess you can say it influenced it—a little bit.

RELATED: How TikTok Made Ricky Montgomery A Successful Recording Artist

W: It’s been a year since you first released the first installment, and you just dropped the third one last May. What’s the biggest thing you guys learned while working on all three albums?

TD: Obviously, we learned a lot about different styles of production because we worked with artists we hadn’t worked with before. Especially with part two, blending our type of music with guitars and live drums and things like that was a whole new thing for us. So, that was a fun process.

W: This is a little more personal. If you were to choose your favorite installment from all three Hellraisers parts, what would it be and why?

KF: Mine would probably be part two just because we grew up listening to a lot of those artists we collaborated with. Seeing how they work and do their stuff was cool to be around.

TD: I’d go with part one just because I had so much fun making that part of the album, and those artists were a blast to work with. The videos we did with them were a lot of fun, too. I had a great time making all three parts, but I think part one sticks out to me the most.

W: Let’s say you’re planning your next collaboration. Who’s the artist you want to do it with or someone you want to bring in for your next new song?

TD: Yeah, I’d go with Paul McCartney. I’m wearing a Paul shirt right now, so I’ll keep putting that out there until it happens.

W: So do you want to explore something like funk or folk if, in case, you do something with Harry Styles?

TD: Oh, yeah, you never know! We’ll see. But we’re already doing some stuff; some country stuff. Not quite folk, but we’re working on some country stuff right now that we’re really stoked about working with some amazing artists, so that’s what we’re diving into next.

W: What pushes Cheat Codes to continue making music? Why do you keep doing what you do?

TD: We love it. We’re lucky that we get to do it. We’ve wanted to do it since we were little, so the fact that we get to do it as our career now, travel around the world and play the songs that we make in our studios is pretty cool. So it’s hard to get tired of it, especially with the way we make music. The fact that we’re able to work with different genres and artists, and it doesn’t get too repetitive. So, it’s always kind of a new experience every time.

W: It’s a given that your brand of music likes to experiment and play around with different genres often. What’s your advice to young musicians who hesitate to experiment with their art?

TD: You just got to experiment and try different things until you find out what you love making. Some people might make one type of genre, fall in love with it and just want to make that type—that’s cool, too. So, it’s just a matter of finding what you love doing and finding what you don’t get tired of doing. If you find something you like doing, it’s easy to keep doing it over and over.

KF: Yeah. Stay consistent with it.

W: Where do you guys see Cheat Codes five years from now?

TD: To continue doing what we’re doing on a bigger scale. We want to keep working on different styles of albums and working with different artists who you might not expect us to work with. So we like not to be kept in a box as far as that goes. So, just doing what we do, in that sense.

KF: Yeah, to touch on what Trevor was saying, doing everything bigger. Hopefully, five years from now, we’re headlining a lot of the cool festivals there in Asia and out here in the States.

The takeaway from Cheat Codes: don’t be afraid to do the damn thing. Dream big, play around and experiment outside the box because you’ll never know what comes out by letting things go naturally. And when you do, put Hellraisers on repeat.