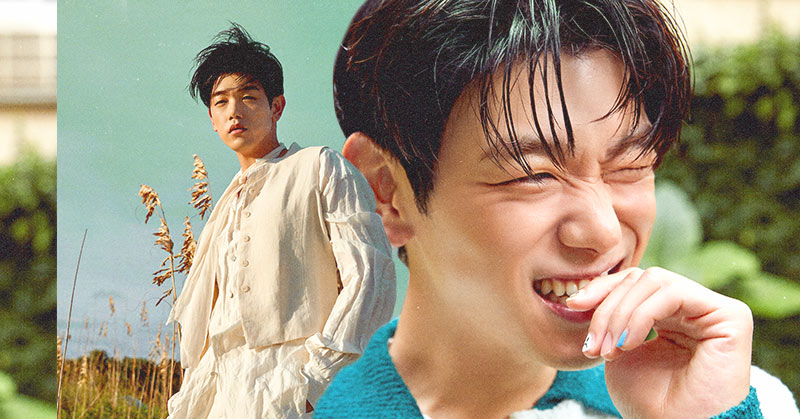 Nothing is more pivotal than a major shift in your orbit. Whether it’s the career switch or finding a home in a new city, there’s always a significant marker that jumpstarts a new chapter in one’s life. For Korean-American singer Eric Nam, his sophomore album There and Back Again begins a new era as an independent artist.

Nam proffers seven new tracks for long-time listeners and fans alike for There and Back Again, all created in 11 months. In an exclusive press conference with Southeast Asian media, he shares that this is the longest period he’s worked on music. He completed the album with the help of a close friend and long-time collaborator, Grammy-nominated producer Rabitt.

There and Back Again leans heavily into mainstream pop elements, with addictive beats and guitar riffs shaping into a more mature and sophisticated sound. While Eric Nam’s brand of pop music spans from the twinkling lilt of K-pop balladry to upbeat pop, his style takes up a new form for his second album. But nailing it wasn’t easy. Nam admits that he struggled in finding the direction of There and Back Again in terms of sound. After trying his hand at different genres (read: pop-punk), eventually, he settled with one that he calls “organic” and “earthy.”

The songs off There and Back Again hit you with one emotion after the other, as different mood switches welcome you with each new track. It starts with Lost On You, an upbeat and reassuring post-breakup anthem, and ends with One Way Lover, a self-aware and melancholy track about letting go for the better. The push and pull of emotions in each song, such as the indifference of I Don’t Know You Anymore to Any Other Way‘s sweet high, and contagious optimism, mirrors the unexpected turns of life. Meanwhile, Wildfire acts like a sonic palate cleanser, with its synth-laden instrumental and autotuned chorus that can make one feel like they’re ascending, making it the standout track in the entire album.

But don’t be mistaken, because the push and pull the record leads us through doesn’t only apply to romance. Nam explains that the album’s title takes everyone through life’s journey one can only describe it as an emotional rollercoaster. It is a wild ride from the highest peaks to the lowest bottoms. After all, we live in confusing times—from the tumultuous state of the pandemic to the personal successes we try to celebrate. He explains, “[For] some people, if you look at it, you’re going to be like ‘Oh my God, this can feel a little bit all over the place.’ But to me, it feels like life. It feels like how we feel on a daily basis, and that’s kind of the best way I felt, that I knew how to put together [into a piece of work] and that is There and Back Again.”

On the horizon is his first-ever world tour around the US, UK, Europe and Oceania, where a live band will join him for the first time. He shares, “It’s going to be a bigger production, probably a little wilder. There’s something about real instrumentation that hits different from a track, obviously, so I’m really excited about that.” But while we manifest for dates in Asia, Eric Nam has a lot up his sleeve to keep us hooked. From a behind-the-scenes documentary for There and Back Again and maybe even some more TikToks to his tunes.

Stream Eric Nam’s sophomore album There and Back Again here.