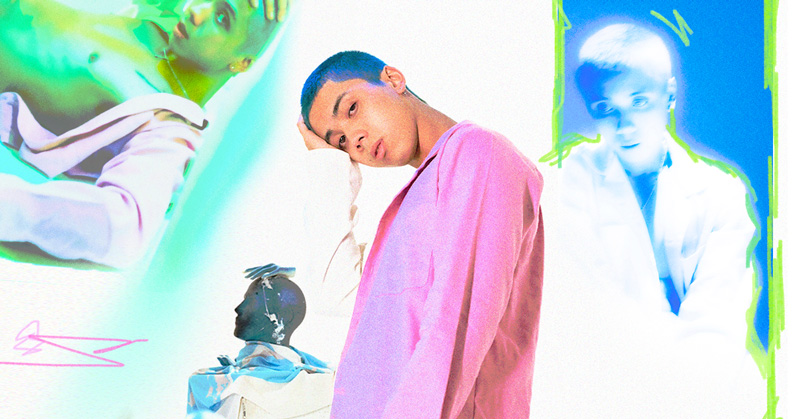 With “Faith,” Fern. Is All Grown Up

We catch up with musical multihyphenate, Fern.

Fern Tan, commonly known as Fern., made ripples in the music scene when he was 17 years old with his dance-pop track, Into You. Four years down the line, he released more music, worked with industry peers both in features and behind the scenes, and even joined the first-ever Paradise Rising semilucent roster. But perhaps one of the most significant milestones comes from the release of his debut album, DREAMWALKER, a sonic experience and expression of his craft. For others, four years might seem like a short time, but Fern. has done his fair share of growing up, and this has culminated in his newest release, Faith, featuring Dennis.

Fern. explores new ground while remaining true to his core artistic sensibilities in Faith. The singer, songwriter and well-rounded artist moves away from his pop and lo-fi roots by exploring new ground with touches of R&B. Lovelorn and filled with pining, his newest single is a plea for a chance. Faith contains Kaori-esque sensual electric guitar riffs that intensify the emotion. Add in Dennis.’s crooning engineered to sound like it’s plucked straight from a dream, Faith is a ballad perfect for stillness. In an exclusive interview with Wonder, Fern. shares a bit about its inspiration: “I guess it’s [based on] a personal experience for me. I mean, I’m 21. There’s nothing else to write about but love.”

But more than its lyrical message, Faith also signifies a brand new era in Fern.’s musical journey. A coming of age chronicled by the track. Read up on what he’s been up to, his realizations and major life changes in the Wonder exclusive below.

RELATED: From Busking to Kumu, ANNA is Not Afraid to Chase After Her Dreams

Wonder: Sonny Zero, LUSTBASS and Dennis. hop on board for Faith. How was your experience working with them on this? What made you want to approach these artists and beatmakers for Faith?

Fern.: They’re my friends; that’s the number one thing. I never work with anyone who isn’t my friend. I mean, it’s always a good experience to be able to share music with the people you love or you’re close with. It’s also learning from each other [and] growing from each other’s skill sets or experiences—friends are the way to go.

W: Faith signifies your transition to a brand new sound. Could you tell us the story of how you found this evolved Fern. sound, and why did you want to start it with Faith?

F:  I guess it’s just timely like, “Okay, that’s a new sound or a new song at this point and time.” But I think it’s been two to three years already [that] I’m kind of on and off with music. It came to a point that I didn’t even want to be an artist; I just wanted to make music behind the scenes. So I guess it’s more just coming into terms with where I am now and recognizing that [my career] is a blessing that not a lot of people have, and a lot of people want to be in the position I’m in. So who am I to put that to waste and say, “Oh, it’s because I don’t want to be famous or something?”

For me, that was just insecurity. Fame is not a bad thing. I’m just going get used to it and try to get used to the fact that you can get famous off of [music] and [that] you can be jaded with a lot of other external factors. So many things come with the art industry, so being able to come to terms with that and not allowing it to get into [my] head was the most significant change.

RELATED: ena mori Welcomes Us to Her Vivid World With “Don’t Blame the Wild One!”

W: On the topic of your art and music, we noticed you’re very particular with your visuals. How do you conceptualize your visuals for each song or each release that you have?

F: I consume a lot of visual art [and] I’m also friends with a lot of artists, so that’s where it comes from. I also do art myself. I want to make films, have [art] installations and all that stuff in the future. So I’m obsessed with the idea of creating things, not just music. I feel like music is the one I’m doing now because it’s what I’m most inclined to do, and it’s what I’m good at, naturally.

W: So you’re very protective of not only your music, but all the art you put out?

F: Yeah, because that’s the fun part for me. I feel that with some artists in this industry, the fun comes after. Like when you’re big or the spotlight is on you, and it [kind of] sucks when you’re not there yet. But what I’ve learned to transform my brain into thinking is kind of the way that I enjoy the process, and everything that comes after becomes an afterthought. It’s just the bonus part. So for me, being super involved in everything is the fun part. And then, after I release something, I move on to the next.

W: You recently rocked the stage for Island Records’ NOMAD Music Festival. How was the feeling of singing and performing with an actual audience right in front of you?

F: Super fun! The coolest part of this whole thing is getting to see the people. I don’t think I’ve been grateful enough for the fact that people actually listen to me. It’s still crazy to me. Again, because I never really look at the numbers and stuff, I don’t notice it at all. I don’t even have Spotify for artists or that stuff on my phone. So when I see people singing the songs or say know, they say, “Oh Fern., I love your stuff!” I react like, “Woah. Damn. People listen to me.” It’s crazy.

W: You mentioned that Whatever This Is is the best song you hear live in one of your sets. Why?

F: It’s fun to sing, I guess. You know I’m not the best singer also. A lot of my songs rely heavily on like the production stuff. With Whatever This Is, I think I can sing that well. I struggle singing the other songs live, but that song comes naturally to me. That’s why it’s the most fun to do.

W: If you could tell your younger self one thing, what would it be and why?

F: Know your purpose. I wish I knew why I was doing certain things in my life at a young age. I would’ve saved a lot of stress or pressure or maybe avoided even some failures even though they were necessary. But it’s vital to know why you’re doing something. Because when things don’t make sense, and you can’t control [them], you can find that sense of peace when shifting back to why you’re doing something. If you’re fighting for anything or dealing with something, the easiest question to always retreat into is always, “Why? Why am I going through this?” And then you remember, oh yeah, that’s why. You’re okay with it.

W: Going back to your basic reasons grounds you?

F: It’s always the basic reasons. For me, it’s kind of living what my parents wanted to do before because they’re both musicians, but they never got the chance or opportunity I got. So when I’m not getting streams or when people tell me that I should be getting more streams, it doesn’t affect me. I’m not doing [music] for the streams. I’m not doing it for fame or money even, which is why I’m still pretty sane until now—I’m genuinely still having fun making music.

There always comes a time in a young creative’s life when keeping up with the world clouds one’s true purpose. And for Fern., that journey taught him to turn inward. So more than baring his soul and experiences in this new track, Faith also signifies that Fern.’s all grown up.