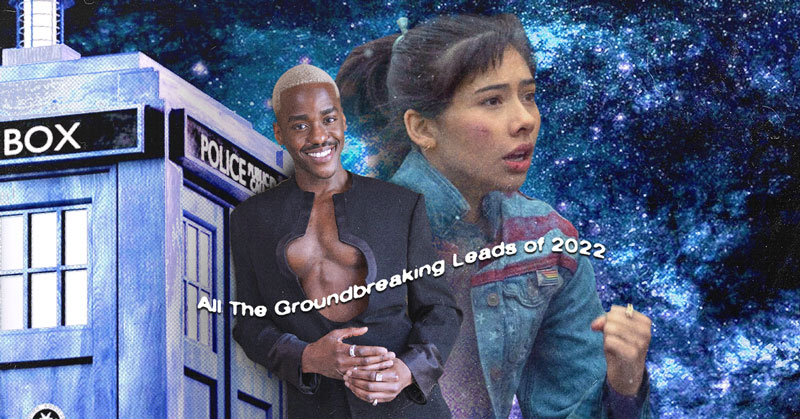 All The Groundbreaking Leads of 2022

Breaking barriers one character at a time

The conversation around diversity continues to happen in different industries. From the fashion world to Hollywood, the discussion often involves giving more roles, responsibilities and exposure to those who are queer or of color. This includes spotlighting Asian-led brands, hiring actual gay people to take on gay roles and crediting all the Black creators who jumpstarted trends. Telling Asian stories means giving the community space to show it transparently—without any threat of tokenization or whitewashing. The same thing goes for Black storytellers who try to go beyond stereotypes.

Thankfully, those who have the power to give these individuals platforms actively do. Specifically speaking about Hollywood, authors and showrunners cast the best actors regardless of race. If these individuals can embody the character, who’s to say they shouldn’t play them based on their skin color or ethnicity? To celebrate such wins, we list down the groundbreaking leads of 2022.

Disney’s Turning Red is an already revolutionary film in itself. But instead of casting an A-lister to voice Mei Lee, they stuck with Rosalie Chiang. According to San Francisco Chronicles’ Datebook, Disney initially hired Chiang as a temporary placeholder for Mei Lee. But as production continued, they kept her as a regular cast member. In all honesty, Disney made the right decision. Who else can pull off the “I like gyrating!” line like Chiang?

RELATED: 7 Female-Led Comedy Specials You Should Stream on Netflix

The new Doctor is in. Sex Education’s Ncuti Gatwa (who played Eric Effiong) was recently cast as the latest Doctor Who—the first Black Doctor, to be specific. Ncuti Gatwa, 2020’s Best Actor at the Scottish BAFTA, replaces Jodie Whittaker as the resident time traveler in this well-loved sci-fi series. His casting is not only historical but might actually pave the way for more diverse Doctors to appear. While Jo Martin played the Fugitive Doctor for three episodes, previous lead Doctor Who actors include 12 Caucasian men and one white woman. This fact makes Ncuti Gatwa’s role highly anticipated.

Carrying the torch as Marvel’s first openly Queer Latina hero might be a heavy weight to bear, but it’s nice to know Xochitl Gomez continues to do it with finesse. The world gets their first look at America Chavez in Doctor Strange in the Multiverse of Madness. This is just the start of more progressive conversations in superheroes and comics. While, of course, Gomez’s America serves as a side character, her importance in the story is enough to treat her like a lead. Here’s to hoping we get to see her in action soon.

The original Percy Jackson live adaptation, according to many, flopped. With a reboot in the works, many were curious about who will succeed Logan Lerman, Brandon T. Jackson and Alexandra Daddario as Percy, Grover and Annabeth, respectively. For the upcoming series on Disney+, Rick Riordan casts The Adam Project’s Walker Scobell as Percy Jackson and Leah Jeffries as Annabeth Chase. Some fans were quick to react since Annabeth is canonically Caucasian, while Jeffries is a Black actor. They thought it was disloyal to the series. However, Riordan defended his choice, calling angry fans “racist” for being upset over the casting, especially nitpicking Jeffries’ race and ethnicity. The fact that Riordan vouches for her ability speaks volumes. Who are we to dispute the actual author over all this?

The Percy Jackson and The Olympians reboot also casts Indian-American Aryan Simhadri as Grover Underwood. As we can see, Riordan has historically gone against his own writings. Back in 2010, he cast Brandon T. Jackson, a Black actor, for a canonically white role. This further proves that Riordan doesn’t believe that looks are the sole basis of one’s ability to embody and carry a character. According to Deadline, Riordan states: “I have been clear, as the author, that I was looking for the best actors to inhabit and bring to life the personalities of these characters, and that physical appearance was secondary for me.” He continues this belief by casting Disney star Aryan Simhadri as Grover—a little different than Brandon T. Jackson.

Safe to say, this is the start of something long overdue: the amplification of diverse talents in mainstream media. One that isn’t tokenizing or fetishizing but allowing them to take up space and make their mark.