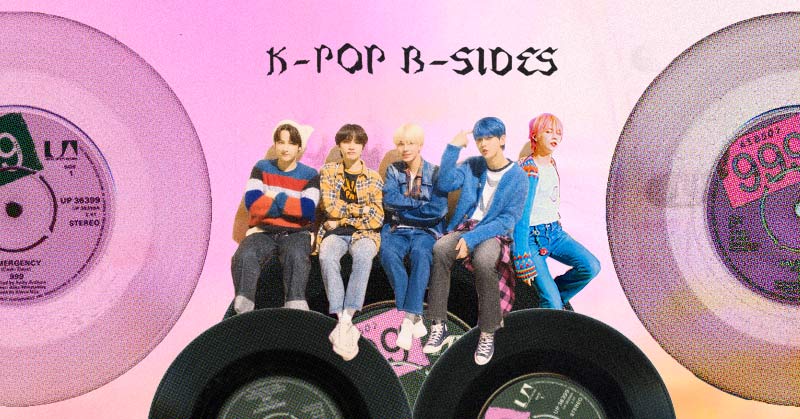 Six K-Pop B-Side Tracks That Deserved Their Own Promotions

Alternately: Music recs with a ton of context

There comes a time in a K-pop fan’s life when you’ll feel like you’ve heard it all. You follow different groups and listen to their releases regularly, but there’s only one song that speaks to you on another level. But sometimes, these are also songs that deserve their own eras and promotions.

Whether in music shows, live concerts or a group’s original content, we want to hear it there. Those songs should be promoted for weeks on end and have a dedicated music video, too. Or at the bare minimum, performed as an accompanying song onstage in music shows and concerts. But that’s not really the case, right? With wide discographies and regular releases, there will always be K-pop b-side tracks that get paid dust.

As I scoured through stan Twitter, Reddit threads and asked my own circles, there seems to be a consensus that these tracks didn’t need to go this hard only to be a b-side. And according to the braver ones, some of these b-sides probably should’ve been chosen as the title track.

RELATED: 5 Songs Where the Featured Artist Got Bigger Than the Main Artist

If musical grudges were a thing, then this would probably be the longest one I’ve held in my entire stanhood. BTS dropped Paradise (from their Love Yourself: Tear album) and just left it at that. It’s a soft R&B b-side track that touches on the fear that comes with dreaming too high and burning yourself out, fast. It showcases the vocal line’s phenomenal skills and the rap line’s exceptional verses. Not much about Paradise was heard after its release in this album compared to the other tracks from the Love Yourself trilogy.

Come on, HYBE. All we’re asking for is one live stage—is that too much to ask for?

fromis_9 rode the disco-pop wave back in 2020 with Feel Good (SECRET CODE). Though, I’d like to zero in on Weather. It was a perfect mix of fast tempos and easy-going hooks, sprinkling in 8-bit sound effects to give the song unpredicted turns. It was a refreshing bubblegum track that made it a great listen and was crowned as one of the group’s best b-side tracks. At least the group (and their agency) liked Weather as well, because they released a special music video for it. That’s one thing the rest of these songs don’t have.

Ghosting by Tomorrow X Together

Tomorrow X Together is another group with a long list of b-sides that need to be hyped up. And while MOAs know how croon-inducing 20 CM is and how Magic is the summer song of our dreams, Ghosting is a whole different experience. It kicks off their mini-album, minisode 1: Blue Hour, and offers a different dose of retro—dreampop. Ghosting sounds like it fits right in a playlist with M83 and Wolf Alice songs, ready to take you away to another headspace all the while showcasing TXT’s ethereal vocals. It’s high time to give dreampop!TXT some love, too.

ITZY’s comeback for this year, entitled In The Morning, was an anthemic hip-hop song about stealing someone’s heart like the mafia. But the outlier in GUESS WHO? is SHOOT!, a trap song with a dash of Latin influences that is refreshingly different from the electronic pop and dubstep songs of earlier tracks. It’s out-streamed Sorry Not Sorry and KIDDING ME, two b-sides that the group performed and promoted on the side, meaning that the world wants to hear SHOOT! more often.

ITZY and JYP still got the year-end music shows and K-pop award shows to surprise everyone with a SHOOT! stage, just saying.

When TWICE had their Hot Girl Summer era with Alcohol-Free that headlines the Taste of Love EP, everyone was given bubbly and upbeat anthems for the season. It was a release filled with dance-pop tracks providing fuel for our at-home parties, including Baby Blue Love. It talks about fresh summer loves over happy beats and guitar riffs. It’s still very much in TWICE’s brand, singing upbeat songs about falling in love all year round. They might not be shy-shy-shy-ing as often, but their bubbly and happy core is still there. Perhaps this is why ONCEs and TWICE’s casual followers love it so much.

Yeah, what is it with songs named Paradise that aren’t getting the attention that they need? Granted, this EP called Don’t Fight The Feeling is marketed as a special album in celebration of their ninth anniversary. There was a lack of promotions for this era, especially with Chanyeol and Baekhyun enlisting into the military for their mandatory service. But it’s undisputed that Paradise is one of the best songs off this release. If there’s anything I learned from stanning EXO, you can hear the fun and happiness oozing off the lovesong. Case in point? Unfair. Hearing their voices brings you into the honeymoon phase and giddiness, and that holds in Paradise.

It can take years, but I’m still patiently waiting on the day that EXO will be singing this live at least once.

RELATED: EXO’s D.O. Is Releasing a Solo Album and the World Is at Peace Again

Honestly, this is another body of evidence that hidden K-pop gems are everywhere. I know the rich selection of artists might take time to dig through, but it seems like it’d be worth it in the end. K-Pop as a genre isn’t limited to a certain sound or type but rather, a whole library of bops waiting to be discovered.

Did I miss any b-sides that deserve to be promoted? Hit us up in the comments below!