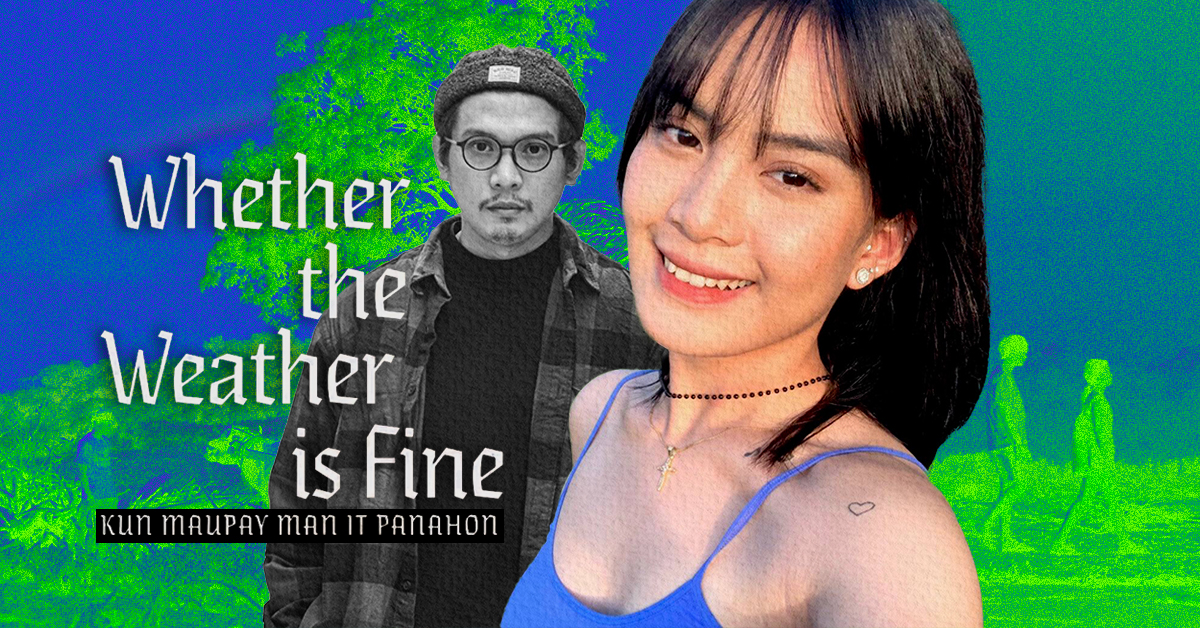 “I feel [that] regardless of how the film ends, it’s a film that celebrates life.” –Carlo Manatad, Kun Maupay Man It Panahon director

The first time I saw the trailer for Kun Maupay Man It Panahon (Whether The Weather Is Fine), Andrea’s (Rans Rifol) rendition of Kantin Dudg’s Gi-Fingers wouldn’t leave my head. It was both eerie but optimistic, interwoven through different scenes that would clue you in on some semblance of the plot. It sets the tone for the rest of the trailer. What was once a song about finding a way to feed people at a party paints a surreal picture of people getting by. The premise mentions a long search for loved ones before another storm hits, suggesting a narrative we know of but are yet to understand its depth.

We caught up with Director Carlo Manatad and rising actress Rans Rifol about their journey with Kun Maupay Man It Panahon.

The movie was seven years in the making—from story development to finding funding sources. Manatad and his co-writer approached international film bodies, a risk, especially for his first feature film. It took much time to find budget to create it that he often asked himself, “Ang tagal na [ng Yolanda], first feature film ko tapos ganiyan kalaki yung scope? Sure ba ako? (It’s been a long time since Typhoon Yolanda, and I want the scope of my first feature film to be that wide? Am I sure about this?)”

Despite the hesitations, Manatad says that “Always, the answer is yes.” Hence, he pushed to make the film happen no matter how long it took.

A post shared by Kun Maupay Man It Panahon (@theweatherfilm)

RELATED: Ang Fraile Is The Good Laugh (And Slap In The Face) You Need

Fast forward to its premiere at the 74th Locarno Film Festival in Switzerland, Kun Maupay Man It Panahon wins the Cinema e Gioventù Prize. Aside from that, the film also premiered in the Toronto International Film Festival while also participating in this year’s Metro Manila Film Festival. The reception, while limited, could only be described as warm. For Rifol, whose performance of Andrea serves as her debut on the big screen, she feels a lot of gratitude that Manatad trusted her to bring justice to her character.

Rifol also shares that there was a huge wave of jitters that came along with it. According to her, “Sobrang kabado ako kasi di ako alam kung paano ba ako umarte non. As in, kahit yung mga raw clips di talaga pinakita [ni Direk] sa akin. Gusto niya mapanood ko na talaga dito sa big screen, na worth it naman noong napanood ko. Pero all in all, sobrang warm ng welcome nila sa movie and maganda yung feedback nila, so I’m happy. (I was really nervous because I didn’t know how I looked like while acting. Direk Carlo won’t show me even the raw clips, he wanted me to see [the movie] on the big screen. But it was worth it when I watched the film. All in all, they did welcome the it warmly and give amazing feedback, so I’m happy).”

But for Manatad, between the nervousness and triumph, comes a bittersweet feeling. While the over-the-moon happiness appears to be a non-negotiable feeling to see his work come to life, he finds himself unable to enjoy the victory fully. Especially with the knowledge that everyone’s collective situation doesn’t offer the same luxury of traveling around the world and freely enjoying the cinemas. Manatad laments candidly, “Even up until now, I feel that even it’s in MMFF, it’s not a feel-good film. It’s a hopeful film, but it talks about something that’s really happening right now, there’s a storm (Typhoon Odette)… so parang, paano ba ‘to? (How does this go?)”

Through the years and countless storms that struck the country, resilience has become attached to the Filipino identity. An adjective to describe the way we continue to survive through it at all costs. But for Manatad, true resilience includes accountability. One where institutions help educate citizens about disaster preparedness. Manatad explains, “Resilience should be something that people would know what to expect or what would happen in terms of a tragedy—and then they survive. While resilience is always described in a way na, ‘Ah ang galing ng Pinoy! Nakakatawa, nakakapag-celebrate after this.’ It’s not that. (While resilience is always described as how great Pinoys are, being able to laugh and celebrate after this. It’s not that.) We’re done with fake resilience! We need accountability—at least for me—this is what I realized after the film.”

So for what they want viewers to take away from watching Kun Maupay Man It Panahon, Rifol mentions learning from and relating to the characters themselves, may it be the extras with 10-second scenes or the main characters such as Andrea. “Kasi, feeling ko kahit may [trahedyang] nangyari, go pa rin eh. Yun lang yung natitirang choice: yung maging okay ka. Kahit gusto mong magkaroon ng ibang choice, yun lang din meron. This is a hopeful film, yun sana yung makuha nila. (I think that despite [a tragedy] happening, you have to move forward regardless. Even if you want other options, that’s the only choice you have: to be okay. This is a hopeful film, I hope that’s what they take from it).”

Meanwhile, Manatad admits that even if Kun Maupay Man It Panahon explores violence, survival and heartbreak, the movie is hopeful. It serves as an ode to the survivors, may it be the ones from Tacloban or those who continue to survive every day. “But most importantly, [the movie] is an eyeopener about how Filipinos see and try to survive all kinds of tragedies. More than anything, it’s a film about hope. It’s a film that talks about dreams, about the youth. And I feel [that] regardless of how the film ends, it’s a film that celebrates life.”

Catch the award-winning performances of Rans Rifol, Daniel Padilla and Charo Santos-Concio in Kun Maupay Man It Panahon (Whether The Weather Is Fine). The film continues to screen in select cinemas participating in the MMFF 2021 until January 7, 2021.