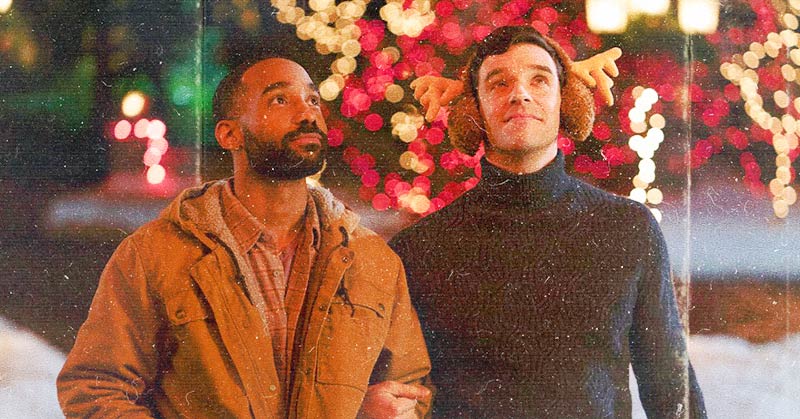 When did Netflix join Hallmark and Lifetime and begin to really lean into shamelessly predictable Christmas rom-coms? My theory is it happened around the time The Princess Switch premiered, which also gave holiday movies on Netflix the license to test the limits of outrageousness and “it’s so bad, it’s good.” It appeared that with Single All the Way, a major holiday push this season, the streaming giant sought to tweak the formula (by a smidge).

Written by Chad Hodge and directed by Michael Mayer, Single All the Way introduces Peter (played by Michael Urie), who finds himself without a significant other as the holidays hit. As he prepares to make his way from LA to New Hampshire, where eager family members apparently judge him for being single, he resolves to cut his losses and makes his best friend Nick (newcomer Philemon Chambers) play his fake boyfriend for the holidays. As a blind date set up by Peter’s mother (Kathy Najimy) throws the plan off its course, just enough chaos ensues.

While Christmas rom-coms do bring with them certain expectations (read: palatable, feel-good, measured), the queer experience central to Single All the Way made it fresh somehow. At the same time, it could have been pushed further. Delight, it does. Shock? Not so much. Still, it’s an entertaining enough journey; and ahead, I recount moments from mine with all the thoughts that cropped up while watching.

1. Big wow at all the caricatures of Gay Man™ jammed in the first four minutes of this movie.

2. Why is being single (over the holidays) seen as such a tragedy again?

4. Kathy Najimy has had my heart since the moment I saw her in Sister Act, and I have been won over again.

5. “Why do you avoid love?” asks Carol. “Why is romantic love your measure of happiness?” I ponder.

6. I just want to see the world as all of Jennifer Coolidge’s characters do.

8. Once more with feeling: what is so wrong with being single over the holidays? Peter is boyfriend-free, not boyfriend-less.

9. Nick’s love language is clearly “acts of service” (and clearly jibes with the family’s).

10. The best friends-to-lovers pipeline has never looked cuter. But what is this lack of chemistry?

11. I would pay good money to see Jennifer Coolidge in a one-woman show of the nativity pageant.

12. Also, performing for Christmas is giving me war flashbacks of our family’s song and dance numbers for titos and titas.

14. Having overly supportive parents, I guess, is a good problem if there has to be a problem. (It’s certainly leagues better than the reverse.)

15. It’s great that James also gets a decent ending.

16. Curious to know what Peter brings to the table at this point because it’s clear what Nick does.

17. The intense preoccupation of this family with being in a relationship sets this movie back. But the characters are so endearing, it all becomes forgivable.

19. The pun aside, single all the way, the protagonists obviously are not.

As far as mainstream holiday movies go, Single All the Way doesn’t stray far from the rom-com template. Then again, predictability provides its own kind of comfort. If that sounds like something you’re up for, stream Single All the Way on Netflix.