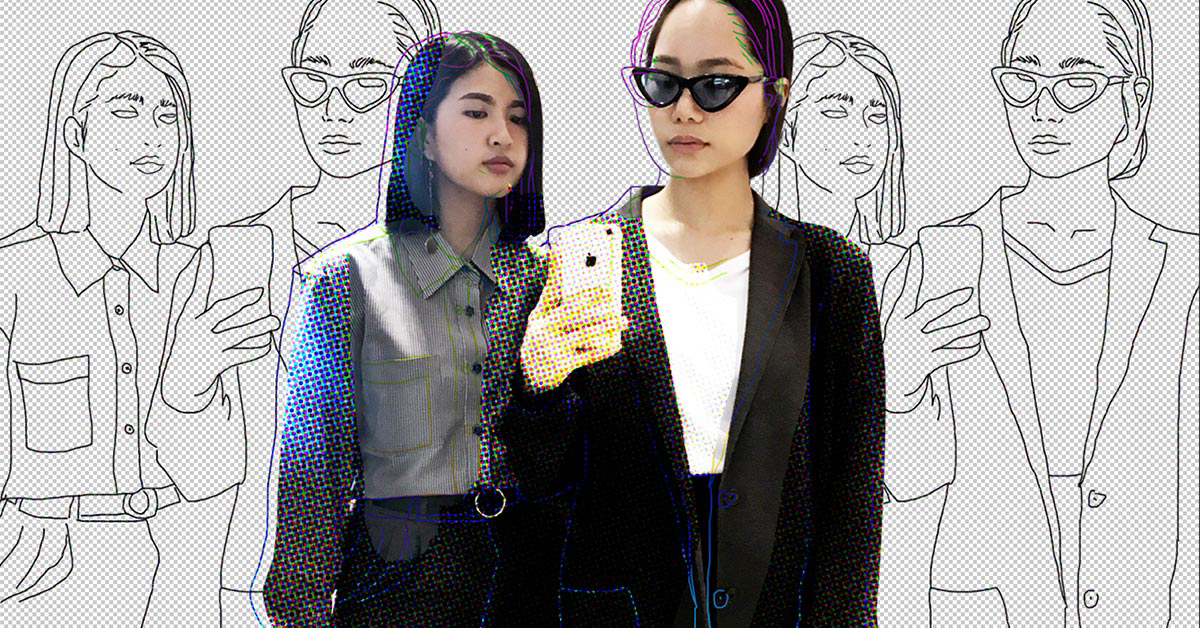 A style challenge for the color shy

Decoding one’s personal sense of style never truly meets an end. In my experience, however, the factor that has considerably helped this process is wearing black…a lot of black.

In my teens and early ‘20s, as anyone feeling their way through concepts like self and identity does, I went through an experimental stage. I piled on color, clashed prints, committed to trends (regardless of whether they worked for me or not) and accessorized to oblivion: basically, just thrilled to be able to put on stuff, period.

But like something meant to naturally pass through one’s system, once I exhausted the aforementioned experimental stage, I came to one conclusion: past young adulthood, life only gets more irrepressibly complicated and there lies the value in simplifying the things you do have control over. Clothing being one of them. I confirmed this reading about things relating to the mind like decision fatigue and through fashion pieces that allude to doing more with less. I found that when Facebook CEO Mark Zuckerberg said, “I really want to clear my life to make it so that I have to make as few decisions as possible,” he was preaching to the choir.

It wasn’t long before black became my daily uniform. With the exception of some grays, the occasional navy oversized blazer or a cameo by the standard white tee, these all-black outfits became my mechanical, nonchoice choice. They’re easy to care for, easy on the eyes and don’t steal focus. I found comfort in the fact that the full extent of my fashion conundrums now is sighing over things like: “ugh––darn it––my blacks don’t match today.” Then, there are jokes by friends and colleagues about how I dress as though I’m always mourning or about to join a coven. Regarding these, though, I really don’t mind; I enjoy a sense of humor almost as dark as my clothing. RELATED: A Tribute to Outfit Repeaters (Who Are Actually Doing Fashion Right)

Having become resolute about my fashion choices, I was intrigued by the prospect presented by Cessi Treñas, a fellow Wonder girl, who proposed a style challenge: What if we get girls who wear all black all the time to swap to colorful outfits for a week? Right off the bat, it seemed like a fun piece, a light read that would revisit and maybe even poke fun at the frivolous side of fashion. Then I got assigned to do the story. Amusement turned into slight intrigue with a dash of “what on earth did I get myself into?” I got on board nonetheless. Cessi, being the only other girl in the office who seemed to be allergic to color, I thought would be the perfect person to take on the style challenge with. So, one Friday, we set off to the closest Forever 21 to scope out pieces for our new colorful wardrobes: five complete looks to wear for five days in the workweek. No black allowed.

RELATED: The Real Wardrobe Basics We All Forget To Buy

It took a good two hours in the store and several trips to the changing rooms for us to call it: getting reacquainted with color is a lot harder than it sounds. The snickering, headshaking and all the moments glaring into the mirror are proof. “For stylists, we kind of suck at this,” I remember Cessi saying, laughing. This was day zero in a nutshell.

The Looks (And Lessons on Learning and Unlearning)

For the first day of the style challenge, I decided to wear the very first pieces I got my hands on at Forever 21, correspondingly. I’ll admit that in the store, abandoning the safe words, “do you have this in black?” was a little liberating. Still, Cessi and I felt like complete imposters picking out these pieces and even more so wearing them.

I, for one, was self-conscious the entire day: clad in color, but felt naked without black. I was also hyper-aware of the fact that the dusty rose trench dress I had on required little to no effort to crease in some places, something I never had to worry about with black clothing. Que sera, sera.

Cessi and I turned to a fail-safe silhouette and unintentionally coordinated in the process: We both wore a pair of high-waist wide-leg trousers (cinches the waist, elongates the legs, can’t lose). This was a far comfier ensemble and was more fun to assemble since the pieces themselves were familiar. We love a good button-down and a knit sweater.

And the “you don’t look like yourself” comments still kept coming.

The reason Cessi started wearing black more often came flashing back for her, too: colorful outfits make her look way younger than she actually is (a good problem to have down the line though, we figured).

By this time, the challenge itself and the colorful outfits were no longer a novel concept. Cessi and I eased our way into being comfortable living in brights. We began looking forward to putting together our looks, in fact, and started dressing like our old selves again.

On our last day, we sported looks we thought encompassed casual Fridays in the world of a colorful dresser: super comfortable pants with nods to athleisure. Any uneasiness we felt at the beginning of the style challenge was all gone by now…likely for two reasons. One was that we’d like to believe we got the hang of color and eventually adjusted. Another was that the style challenge would be over soon.

This style challenge, as superficial as I thought it would be at first, drove home the point that the clothes you put on your back have a significant impact on your mood, your energy and, for that matter, your day. It was also a fascinating firsthand view of the psychology of color at work. Bold colors truly are for the bold. Statement hues truly are for those unafraid to make a statement.

To add, it dawned on me that for someone supposedly impervious to the frivolities of fashion, I didn’t only sport black for the sole sake of convenience; I wore black because it was something to hide behind. Black was my safety blanket as far as style was concerned and I clutched onto it for dear life. I did so in order for me to evade stepping out of my comfort zone or having to explore unchartered realms of self-expression. Color, I realized, is the mechanism that allows these things to happen and everyone can gain something from splashing on something livelier than black from time to time.

RELATED: Local Fashion Brands You Never Knew Existed (But Should)