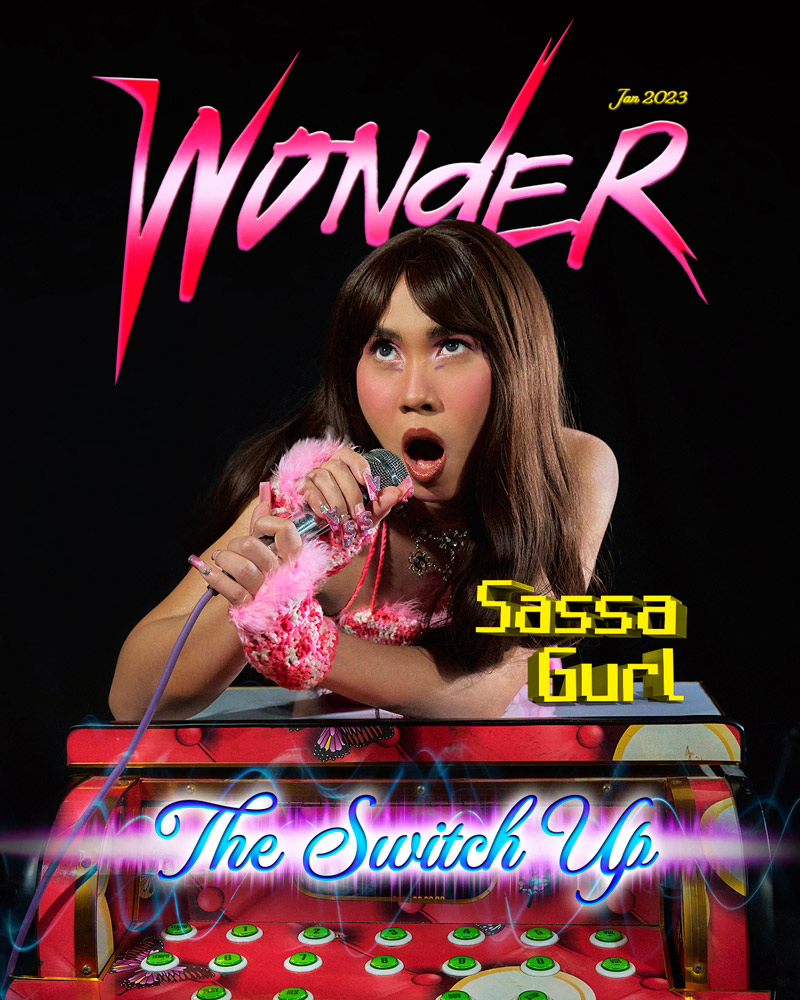 The Switch Up with Sassa Gurl

Change is a concept we often fear, even unknowingly. We all know that daunting feeling that looms over us when the routine we’ve been accustomed to has run its course. A queasiness settles in our stomachs when we aren’t ready to welcome the new beginning that’s ahead. That’s why we like staying in our comfort zones; you can’t get hurt when things stay the same. But as the cliché goes, change remains the only constant thing in life. It helps you grow, move forward and reach higher peaks.

Reinvention, meanwhile, demands a change into something entirely new. However, there exists a backbone and foundation that holds all these new things together. Enter TikTok sensation and Drag Den’s one and only Drag Runner, Sassa Gurl, who is a master of reinvention on the fly. We see the effective transformation into different characters, whether it’s the unapologetic Chikana or the uptight Heidi. Despite the different clothes and wigs, we see that lip tint-induced flush and colorful vocabulary are cut from the same cloth. 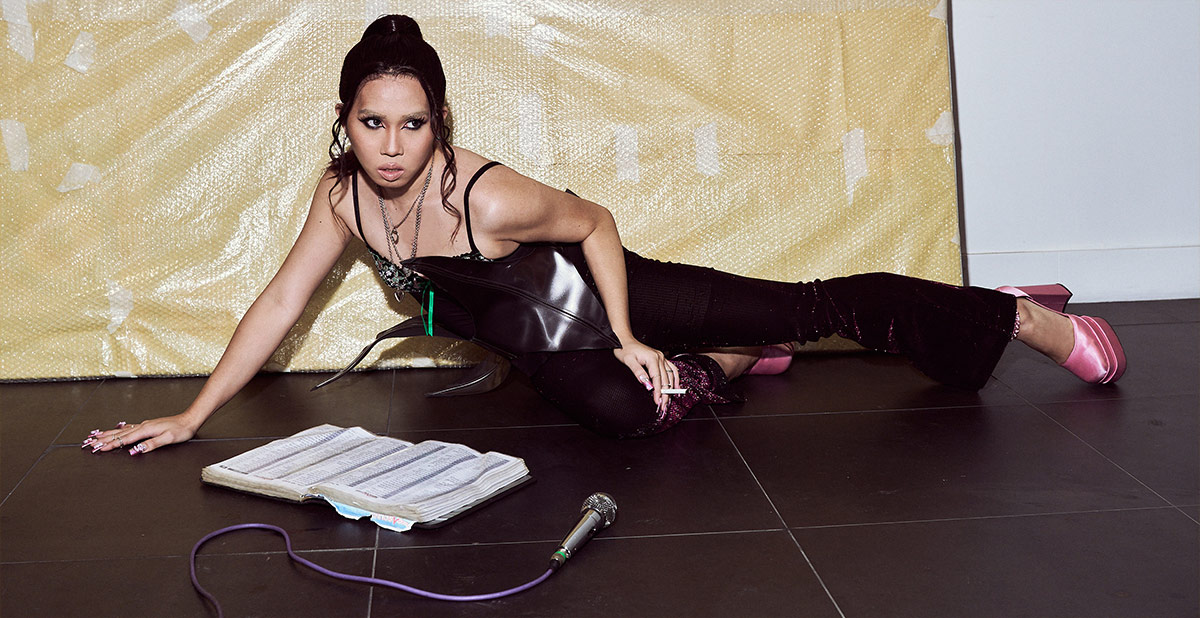 But the road to nine million followers across social media and becoming a household name in this new era of Philippine pop culture wasn’t as easy. Sassa Gurl always had the resolve to break through the entertainment industry. But 10 years ago, her support system wasn’t as sold on the dream. Add in the need to finish her Mass Communication degree and provide for her needs, she had to learn to fend for herself. But Sassa had a plan and a relentless drive to reach what she wanted.

She was determined to make it happen one way or the other, changes in plans be damned.

Growing up, everyone figured that the formula to artista stardom involved joining a reality show, thanks to the success stories we watched on primetime television. But Sassa Gurl realized that this specific path might not just be in the cards for her. She admits, “Na-realize ko na parang ang hirap, kasi I don’t see myself on TV (I realized that it’s hard because I don’t see myself on TV).”

A lot of boundaries remained in place. Standards, in terms of gender or looks, barred many hopefuls from entering the industry back then. But thanks to the rise of social media stars and self-made entertainers, many of these specifics proved to only be suggestions. “Madami akong ini-imagine noon na feeling ko imposible na mangyari, pero hindi ako nag-stop kasi alam ko na magbabago ang mundo (I imagined a lot of things that I thought were impossible, but I didn’t stop it because I knew the world will change).” 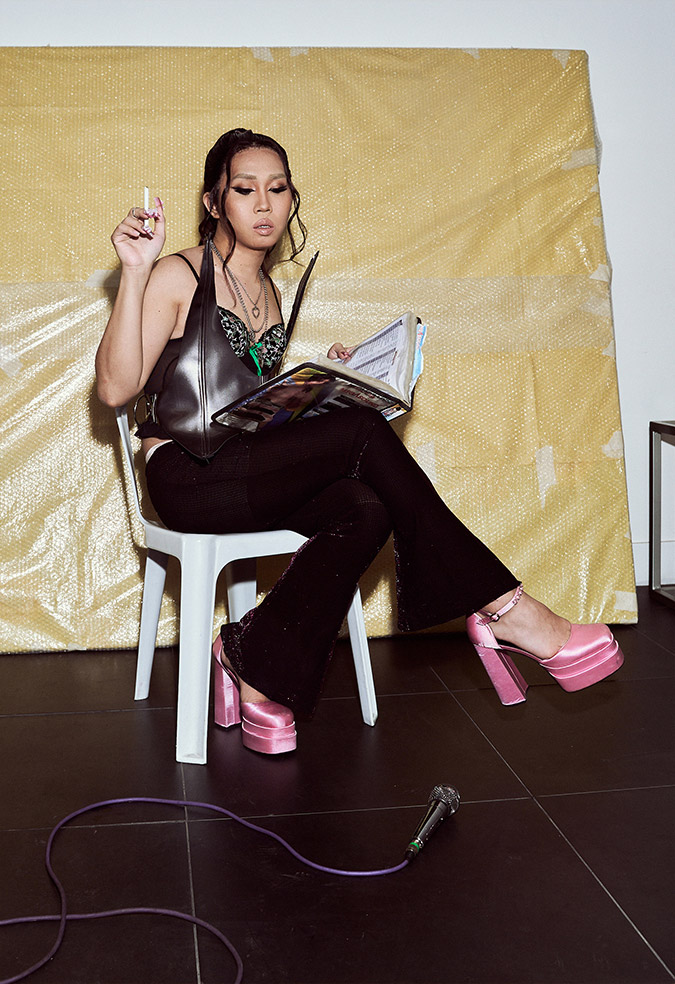 Sassa Gurl devised a new plan, looking for a way to showcase her skills and highlight her entertainment prowess to the world. Starting small on Facebook with her videos, Sassa relied on her skill of grabbing attention—and keeping it—to catapult her towards her goal. “Ever since, I believed na ang laki ng revolution ng digital, ng online (Ever since, I believed that the digital and online space is a huge revolution),” she states. “Up until now, wala pa ring nakaka-discover ng right form on how to do it (Up until now, no one has discovered the right form on how to do it).” And it’s true. She admits that her TikTok following was accidental, a product of posting an edited clip meant for a different platform. But did she let this foil her plans? No, Sassa Gurl let it work in her favor.

And many know the story.

But it doesn’t always mean that the version we see on screen is Sassa Gurl in real life. “Kilala ko kung ano yung kaya ko gawin kapag nag-Sassa Gurl ako on cam or on TikTok. Kilala ko din kung ano ako off-camera (I know what I can do as Sassa Gurl on camera or TikTok. I also know myself off-camera),” she divulges. The key to keeping the careful balance between staying true to Sassa Gurl’s identity and offering something new to the table is separating herself from her art. “I think isa sa mga mahalagang bagay is kailangan mo kilalanin kung ano yung ginagawa mong art o bagay versus yourself. Kasi mas intimate yung sarili mo eh. Mas yun yung hindi mo shine-share sa tao (I think one of the most important things is that you know your art and you know yourself. Because your personality is more intimate. That’s what you don’t always share with people),” she shares.

Protecting her peace doesn’t mean being two-faced or having a completely different personality once the camera cuts—it’s being unafraid to filter things to protect her peace. 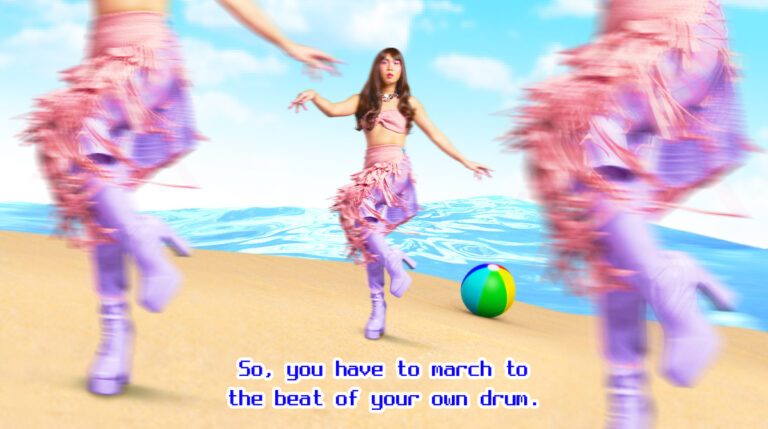 One of the reasons why people love to tune into Sassa Gurl’s skits is her commitment to bringing no-holds-barred humor, brutally honest punchlines and the uncensored baklang kanal-ness of it all. But despite her strong personality, Sassa still finds herself conforming to certain standards that entertainers are held to. The difference is all these are done not to fit in; instead she has a deeper purpose. “Hindi naman kasi siya nawawala agad, so kailangan mo lang rin sabayan yung mga standards na yun. At the same time, onti-onti mo siyang binabago (The standards don’t immediately disappear, so you also need to ride with them. At the same time, you slowly change them),” she explains. “Onti-onti ka nagco-contribute sa mga pagbabago ng pananaw ng mga tao (Little by little, you contribute to these people’s shift in perspectives).”

Sassa sees her work as something that contributes to this change. After all, the entertainment industry barely shows callous characters, the usual tambays and other people who want to be represented in dominant spaces. To make that happen and show it to the world, Sassa puts a semblance of her authenticity at the fore. “I want something that’s very me, kasi ayokong makain ng sistema. Nakakapagod yun (I don’t want to be taken by the system. That’s tiring). So, you have to march to the beat of your own drum,” she emphasizes.

Videography and Editing by MV Isip 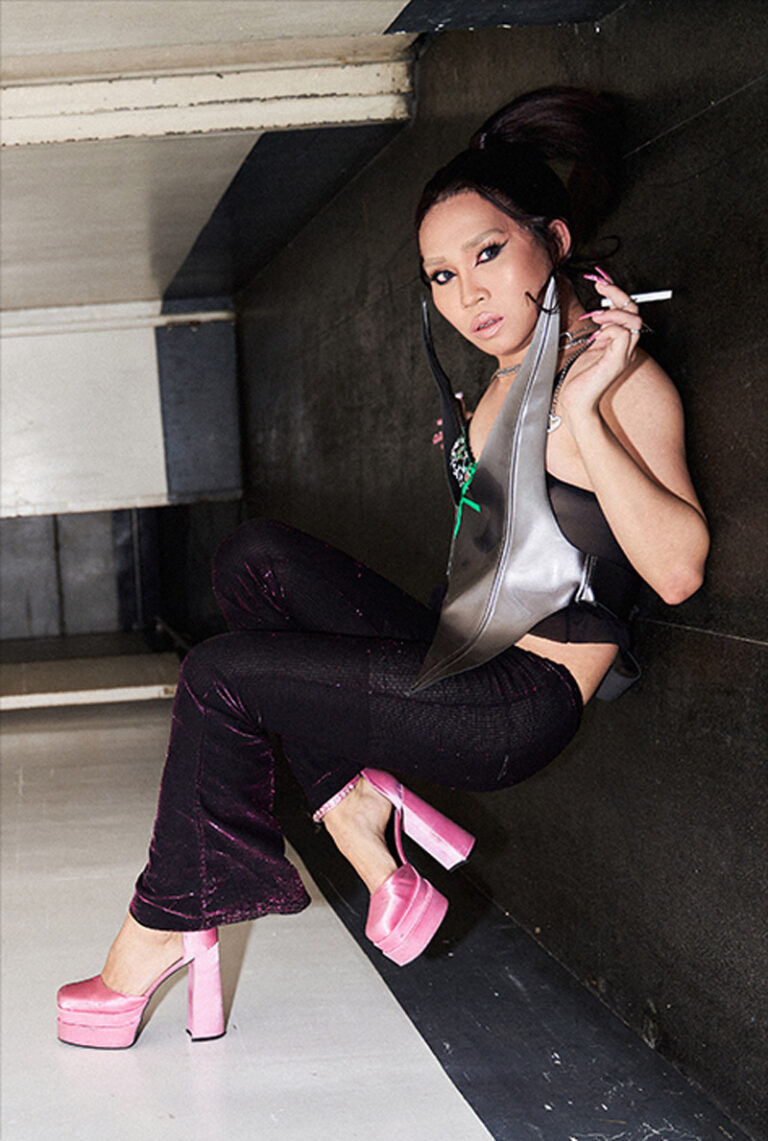 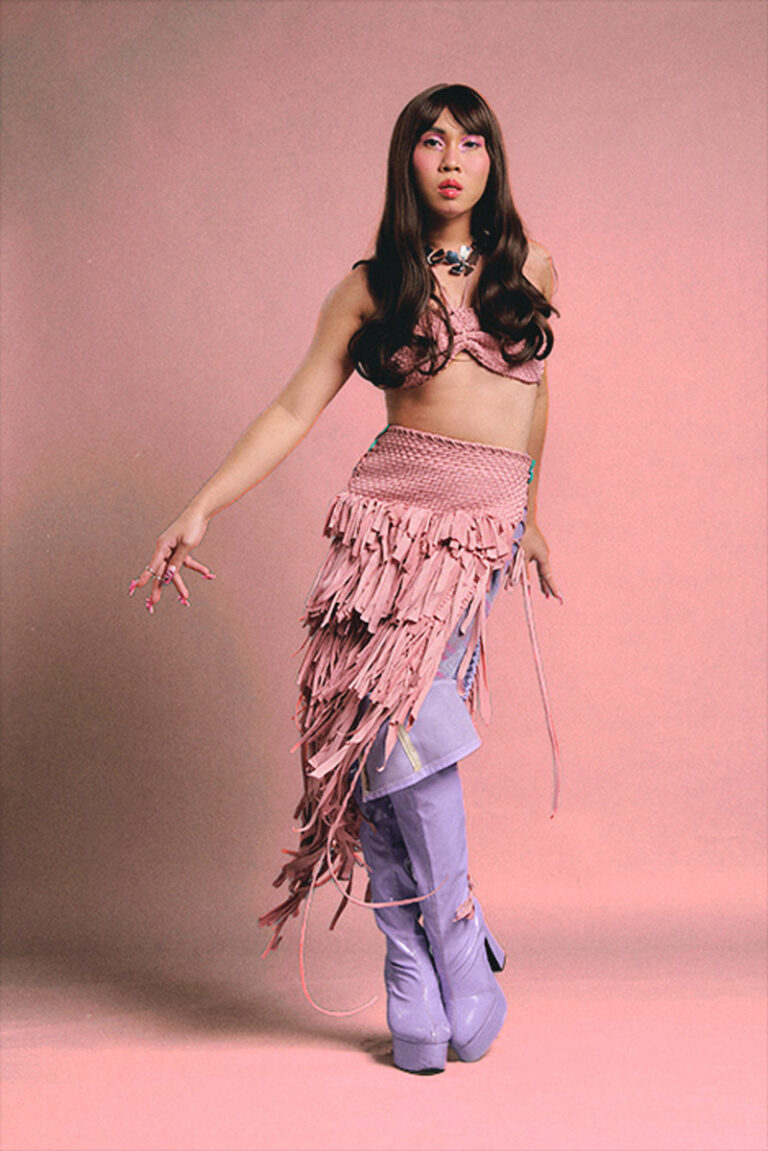 It’s this advocacy for representation that led Sassa Gurl to saying yes to Drag Den. Because while the queer experience and its culture slowly take up space in the mainstream, Sassa thinks we still need to see ones that make statements. Ones that bite. Ones that don’t shy away from telling the truth. “Nakita ko kung paano pin-resent sa akin yung Drag Den (I saw how Drag Den was presented to me),” she starts. “Pranka! Diretso! Pulitikal kung pulitikal! (Frank! Direct! Political as needed!)” She already knew that some people wouldn’t enjoy the show, but it still encouraged her to join that revolution, the quest to show that the Filipino LGBTQIA+ experience isn’t all glamor, glitter and gags.

The community has its own struggles we need to discuss without trying to make them palatable for all audiences. Sassa Gurl points to Drag Den’s Drag Is Political episode as a perfect example, where the Queens were tasked to reflect their advocacies through their art. Drag became a medium for protest, highlighting issues like hate crimes against trans women, HIV/AIDS awareness and gun violence. “Kasi doon mo makikita talaga kung ano yung ipinaglalaban (Because that’s where you really see what we’re fighting for).”

To Sassa, the show highlighted the struggles often swept under the rug. A spark of change that stems from bringing forth difficult conversations. “Sobrang doon ako natutuwa, na merong nagbibigay ng boses para sa mga voiceless (That’s what made me happy, that there exist those who give voices to those who are voiceless),” she enthuses. It’s obvious that underneath the laughter and skits, Sassa Gurl has an advocacy that she brings into everything she creates. 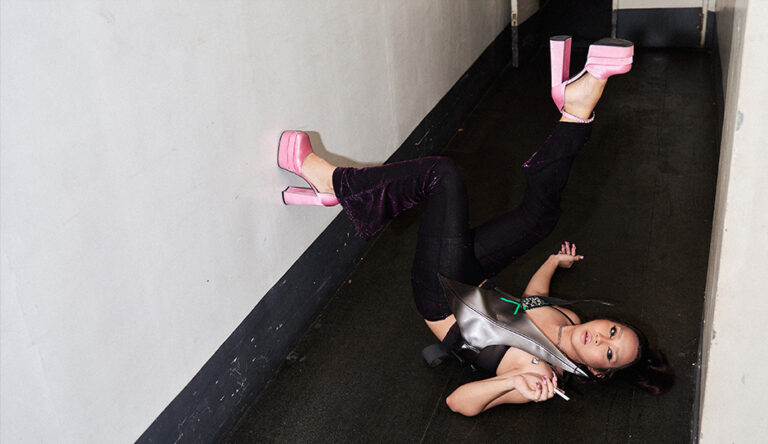 Looking back at what else she’s done, Sassa Gurl cites her White Castle calendar spread as one of her biggest achievements. The TikTok star never expected it to happen. For years, personalities who appeared in liquor calendars were bikini-clad women or really attractive men. So when the ball began rolling and the shoot was well underway, Sassa Gurl did not know what to feel. She admits, “Hindi ko rin alam kung ano magiging reaksyon ng mga tao (I didn’t know what the reaction [to it] would be).”

But despite the uncertainty, she didn’t allow herself to be deterred from doing what she came to do. “Tinapangan ko lang din (I faced it with courage). I think in everything that you do, tatapangan mo lang dapat siya (you need to face it head-on),” she shares. This guiding principle of strength pushes her to keep going, “Kung tama yung pananaw mo dito and yung perspective mo dito, ituloy mo (If your view and perspective are correct, pursue it). Kasi (Because) you know it could break something. It could break a glass ceiling,” she advises, passionately. 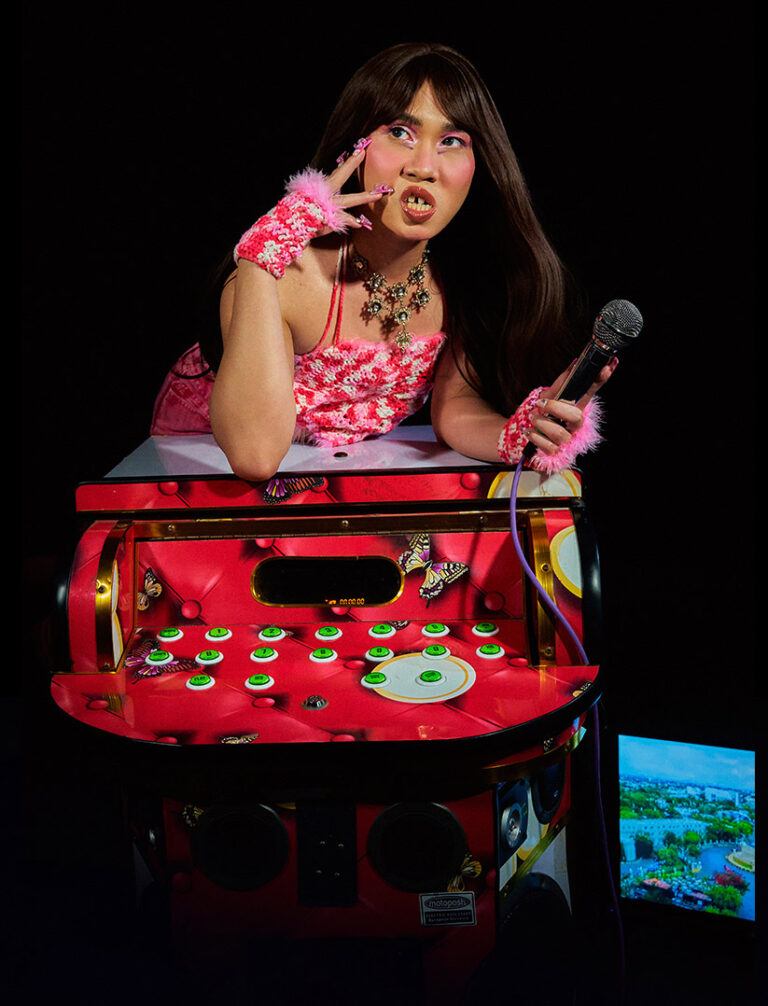 Sassa Gurl hopes to explore more projects in the film industry. She’s not asking for a mainstream blockbuster but an experience that can start her career on that side of entertainment. And for the new year ahead, Sassa mulls over her next switch-up. “I think mas magiging madumi ako ngayon (I need to be dirtier),” she says with a chuckle. “Gusto kong maging demonyo kasi I think yun yung hindi masyadong nagagawa ng tao. Magpakatotoo. Gusto ko ipakita yung authentic side ko kasi yun yung baklang kanal. Yung wala kang pakealam sa sasabihin ng ibang tao, diba?”

(“I want to be devious because I think other people don’t do that much. Be honest. I want to show my authentic side because that’s the baklang kanal. The one who doesn’t care about what others say, right?”) 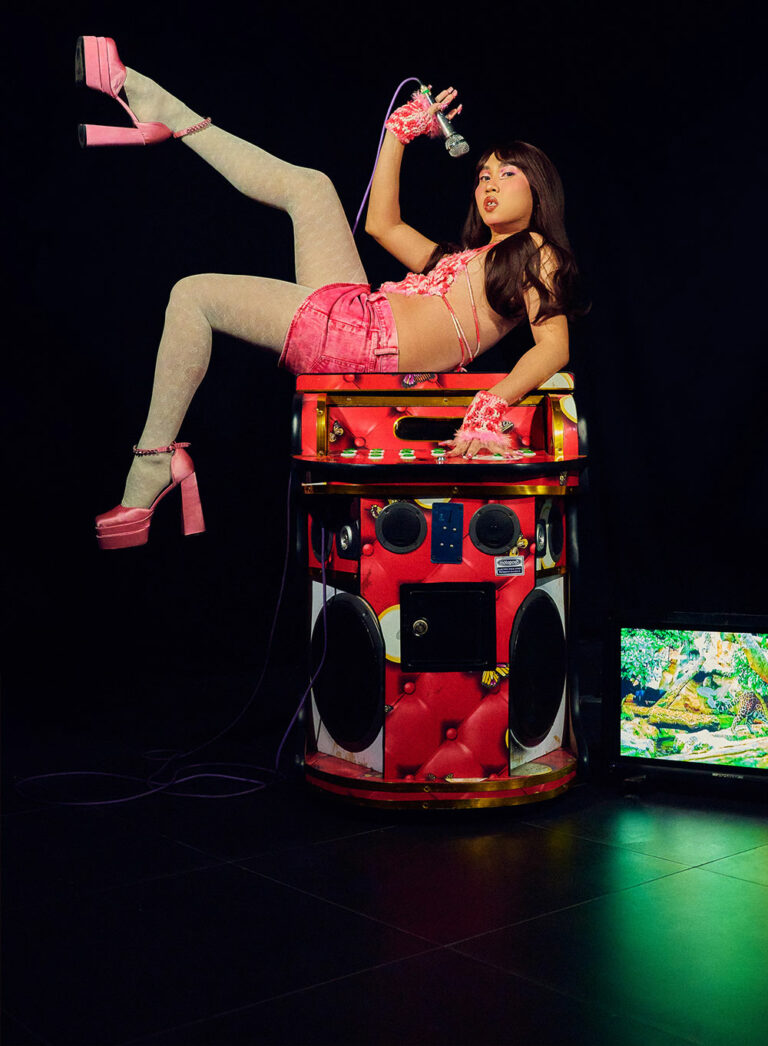 So as we work on that hard reset ourselves this year, it’s important to remember that at the core of each reinvention is a backbone. A foundation built on our intentions, goals, dreams and advocacies.

Don’t be afraid to let life switch things up a little. Face change head-on. Make it all work in your favor—just don’t forget why and who you’re doing it for.

The Art And Misconception of Shibari

As Heard on “OMG,” NewJeans Still Comes Through and Delivers

Dry January: The Benefits of Starting the Year Sober