“We would go [to McDonald’s] and hang out with each other, asking each other how the day went”—Jin

But before the groundbreaking Korean group sealed a once-in-a-lifetime collaboration with the global fast food company, McDonald’s, they’d already shared unforgettable memories together, and on their own, in-store. This includes satisfying late-night cravings after a full day of training before they even debuted. In an exclusive video interview shared by McDonald’s Philippines to press, Jin shares, “Before we debuted, all of us went to the McDonald’s that was about 10 minutes away from our dorm. Since it’s open 24 hours, if we were hungry, we would go there and hang out with each other, asking each other how the day went, and we made memories having fun there. McDonald’s is that place [for us].” 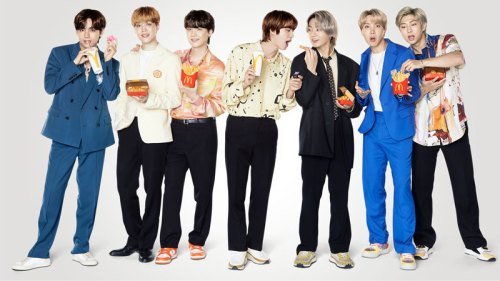 Meanwhile, a nostalgic Jimin reminisces about his time in cram school, fueled by McDonald’s (fit for every student’s budget). He recounts, “For me, I always think of when I was in 10th grade. In 10th grade, I used to go to cram school, and it took two hours to get there from my house. Yes, I took the inter-city bus. I would have 1000 won of pocket money. There was a McDonald’s at the inter-city bus station. So all the time, all the time, every day before I went to cram school, I remember that was my meal.”

For Suga, his most unforgettable memories in his neighborhood McDonald’s included trips with his parents (with the occasional incentive). He shares, “When I was younger, there was a mart near my house, and there was a McDonald’s in there. When you’re younger, if your parents say you have to go to the mart, you would hate it, right? But my parents would say they’d buy me french fries at McDonald’s, they were 500 won. So they persuaded me to go with them.”

There’s no doubt that McDonald’s is ingrained in different cultures all across the globe. For Pinoys, this may include vivid memories of a children’s birthday party, a post-inuman go-to with friends, maybe even your first date with an SO.

Now, we want to know, what’s your favorite memory in McDonald’s? Sound off in the comments below!

RELATED: What to Expect and What to Cop at the BTS Pop-up Store in Manila

Get the limited edition BTS Meal, served in exclusive McDonald’s x BTS packaging. Order it via McDelivery, drive thru, take-out or dine-in until supplies last.