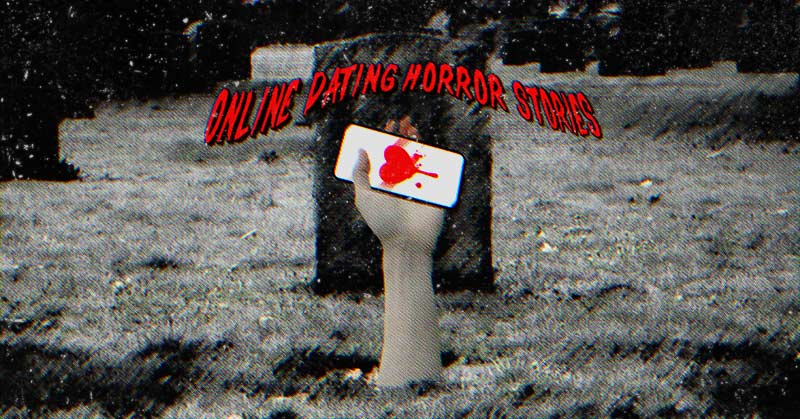 Let’s face it, we already face too many real-life horrors in our day to day. For instance: navigating the perplexing and risky world of online dating. It may be different for everyone, with some noteworthy success stories here and there. Still, we can’t deny that the World Wide Web is full of perverted users and many who are just pricks (or maybe just emotionally unavailable). ¡Qué horror!

For the spooky season at Wonder, we’re featuring real-life horror stories from the online dating world. Ahead, some ghosting stories, encounters with the unsolicited dick pic and even a foot fetish.

So there was this guy I had been talking with on and off for a few months already. One day, we went on video call. It wasn’t our first video call, so when he asked to see my feet, I didn’t think anything of it and obliged. Literally just a few seconds after that, the expression on his face changed and he was… shaking? I was like “What’s going on?” And when he couldn’t answer, I knew exactly what was going on and immediately hung up.

I went out with this guy I met on Bumble. We had been talking for a few days, and we vibed pretty well on our chats. He was 20 minutes late [for] our dinner, which was understandable cause it was a Friday night (pre-covid!). Lots of dead air filled the meal so I thought of bouncing after, but he asked for coffee and I obliged.

The same dead air caught up to us over my upside-down caramel macchiato. [The date] was just a few weeks after the senatorial elections, so for conversation’s sake, I asked him who he voted for. He looked at me and said, “Naalala mo pa yung sa’yo? Parang exam ‘yung sa’kin eh—shade then forget (Do you still remember yours? Mine was like an exam—shade then forget).

I was horrified and pulled the I-forgot-I-have-drinks-with-friends card.

I met this guy on Bumble; he was my type vibe-wise and physically. From Bumble, we transferred to a different messaging app and got to know each other on a deeper level there. After maybe two weeks of online “dating,” we decided to just be friends, which was okay. After establishing that, we continued to talk daily—random stories, daily rants, musings, etc. Even when he’s horny, we’d still talk, but no more than just him sharing stories of his sexual encounters. I was open to such topics and responded with respect naman even though he got nothing from me. I’m ace btw.

So yeah, never answer a call if he’s nagja-jakol (jerking off). Especially without your consent and at 2 freaking AM. 👻

I had no idea my other friends had dates until a few days before the Halloween party, so I went on Tinder to find a quick date and I couldn’t be picky 😅 I didn’t read the description of this one guy but he seemed “real” enough to meet up with. Our message exchanges were mostly about costume details and what food should we expect at the party. On the day of the party, I told one of my friends that I was seeing this so-and-so guy at the party from Tinder. She freaked out ‘cause she realized that the guy I was going to go out with was my old boyfriend’s half-brother?! Last I remembered anything about that ex, they weren’t speaking or that they barely saw each other because the parents’ separation was so terrible. So I still went through with it.

When it was finally time to see my date, [my jaw dropped]. He was the spitting image of my ex! A song started to play once we were about to start talking so he asked me to dance, so we did. After a few songs, I suddenly heard a voice from behind me saying, “Of all people…” I panicked because I recognized the voice—it was his half-brother, my ex.

My friends foresaw the fight that was about to happen so they immediately took me away from the dance floor. The brothers had it out. A few minutes later, the bouncer separated them and took them out of the club, threatening to call the police. I never saw [either] of them again.

We met online and instantly clicked. Even though we were dating long distance for several months since he was in New York, we agreed to make it work. However, I found out, days before lockdown, that he was in a relationship after all. Was I for convenience? I do think so! We never spoke and reached out to each other again. I didn’t want to reconnect afterward because I was traumatized by it.

A lifetime ago, [I] matched with this cute engineer. He was witty, smart, funny—the works. Few dates went well. Then he suddenly vanished. Poof. Before I knew it, he got assigned somewhere in the NCR, and eventually had a girlfriend. He went back to our hometown during the pandemic (and like all things quarantine), added me on Facebook, and we began talking again. Turns out his then-girlfriend cheated on him with a guy back here (yikes), and he also apologized for what he did. My reply, “Ayan, gi-nhost mo kasi ako eh, kinarma ka tuloy. (You ghosted me, and now that’s karma for you).” [It] has since become an inside joke of sorts, and we’re actually good friends now 😂

Two days into a talking stage, this guy asked if I liked eggs. His eggs 💀

RELATED: Get Your Fix of Homegrown Horrors With the Podcast “Nandito Sila”

Want to share your very own online dating horror stories? We’re here to listen. Send yours here, and you might just find it published on Wonder. Don’t worry, you can be anonymous!