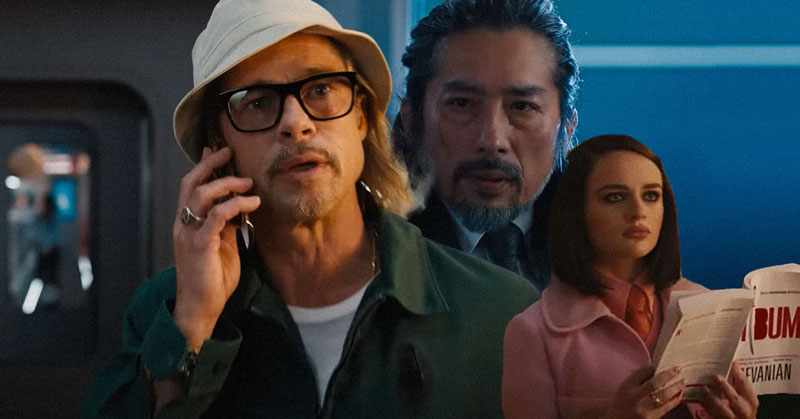 “Bullet Train” runs a little over two hours, so is it worth the time?

The one-location movies are back, and coming in strong with Bullet Train. Starring the likes of Brad Pitt, Joey King, Aaron Taylor-Johnson, Sandra Bullock and Hiroyuki Sanada, the film is equal parts quirky and action-filled—and even throws in some funny Hollywood cameos into the mix.

In Bullet Train, five assassins find themselves on—you guessed it—a bullet train traveling from Tokyo to Morioka, with a few choice stops in between. The thing is, each one arrives with a different mission, only to violently come to the realization that they’re not all there by chance.

The film really begins with Ladybug (Brad Pitt) making his way to the station, a phone in his ear and his handler (Sandra Bullock) on the other side. He’s not supposed to be there, but some other assassin had a cough. His mission seems simple: find a briefcase filled with money, and get off the train. But then we meet Tangerine (Aaron Taylor-Johnson) and Lemon (Brian Tyree Henry), who saved a rich man’s son from a kidnapper, and whose responsibility it was to keep the aforementioned briefcase safe. They obviously don’t take it very well when it goes missing. And then we’re introduced to Prince (Joey King), who kidnapped a man working for a criminal mastermind whom she wants to kill; but what does she have to do with everything else?

It sounds like a lot, but that’s just the tip of the iceberg. The stories weave into each other and into a linear plot about midway through the film. It’s easy enough to keep track of; we’ve all seen Love Actually, right?

RELATED: Family Flicks To Catch This August at the Cinemas

The film will inevitably remind you of the Kill Bill franchise, especially as each assassin is introduced with their pseudonym in big bold characters that resemble comic book covers. But unlike Kill Bill, Bullet Train is—maybe oddly—a fun watch. Sure, there’s a lot of gore, mind games and death, but the characters are endearing and just so fucking good at what they do. They can throw a water bottle so hard that it becomes a weapon, a few twists of a wire makes a gun deadly to whomever fires it.

But within the weaves of violence, Bullet Train touches on some very real themes: fate, revenge, brotherhood, deception, honor. It points out how the definition of “peace” is different for everyone, and how our outcomes are determined by both skill and luck. The movie touches on the different ways we can get to Point B, and how our choices define who we are—but that we can still take a detour if we want to.

But while the film is definitely worth a watch, and rightfully demands that it be watched on the big screen, there are two things I would have changed. Bullet Train runs for a little more than two hours, which might be a lot for a movie, and you’ll definitely feel it. My last issue? Joey King’s British accent.