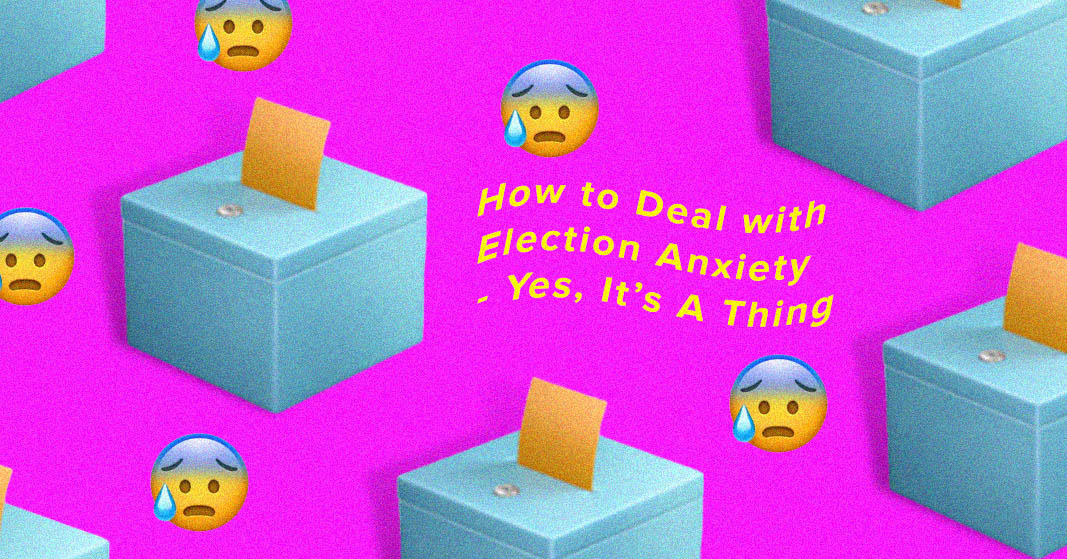 How To Deal with Election Anxiety—Yes, It’s A Thing

A guide for before, during and after the polls

As Election Day draws near, many of us seem to feel more restless. There’s this constant unease when we think about casting our votes, the outcome of the polls and how our futures will turn out after May 9, 2022. This phenomenon is called “election anxiety” or “election stress disorder,” a phenomenon also observed during the polarizing United States Presidential Elections in 2020.

According to the American Psychological Association, the election served as a huge source of stress among Americans. Given the situation in the Philippines, it’s most likely that we’re going through the same motions, too. Don’t be mistaken—the feeling might not end right after sending your ballot through. The election anxiety might even peak at an all-time high as votes get counted in real-time.

But that doesn’t mean that the only way out of this occurrence is through. There are still ways to keep ourselves calm and avoid feeling overwhelmed as the days go by. We get it. This year’s polls are a lot more crucial than ever. The stakes are high; that’s why we’re feeling extreme unrest. Nonetheless, we can still find ways to tide these feelings over one step at a time.

RELATED: Best Political Movies to Watch Before the Election

Take some time off social media.

This might be one of the predictable tips in dealing with election anxiety. Nonetheless, it’s arguably one of the most effective. It’s easy to get lost in our feeds as we scroll endlessly through election-related content. But when this comes in abundance, it likely causes us added stress. Yes, even if many appear for awareness’ sake. So over the weekend, add a time limit on scrolling through timelines and pages. Once you feel more anxious than well-informed, it’s time to put your phone down or replace all the content with something more stress-free.

Election-related debates aren’t only on broadcast, but they also happen in our social spaces. We all encounter having heated discussions, whether online or in public. While we do engage in conversations with good intentions, sometimes other people’s responses (or lack thereof) might stress us out even more. Even the constant anticipation of an unsolicited comment on your candidate of choice contributes to election anxiety. So we’re here to nip it in the bud: choose your battles. Sure, you might be itching to reply to a sour comment on your profile. But ask yourself, “Is it really worth it?”

Process feelings with your close circle.

The thing about election anxiety is that it’s not a singular or isolated feeling. Your community likely feels the same way with the number of people invested in this election. So bring up the upsetting feeling you’re having. Validate your experiences and emotions with your close circle. You’ll never know who also needs to talk it out. At least at the end of the day, you know you’re not alone and you’ve managed to release all these hidden emotions.

RELATED: The Ultimate Guide for First-Time Voters in the Philippines

Map out your voting plan.

Curbing election anxiety doesn’t mean being careless and callous. We’re not asking you to completely let your guard down. Don’t forget to map out how your voting day will go so you don’t get lost. Research and review the candidates you’ll vote for. Prepare the essentials, practice shading your ballot, and print out your kodigo ahead of time. We break down all you need to know right here. Once you know you’re all set, let go and focus on other things.

Take care of yourself physically.

Perhaps one of the most important things to bring into the polls is a sound mind and body. How can you get that without taking care of your body? Release all the pent-up energy by working out. Eat healthily and on time. The most important one of all: get a good night’s rest, especially the day before the polls. We need to be alert as we cast our votes. After all, we only have one shot in the elections, which will affect the next six years. So let’s take care of our chances by looking out for ourselves, too.

Look for reasons to still hope.

We’re not saying this to promote toxic positivity. But enumerating our inspirations and allies in enacting change can help us feel more at ease. If anything, seeing that we still have the power to change the future before, during and after the elections can bring us some sort of comfort. Remember: we’ve done it once, and we can do it again.

RELATED: Why The Personal Is Political For Director Maria Estela Paiso

Instead of counting down the days, let’s make the days before #Halalan2022 count.