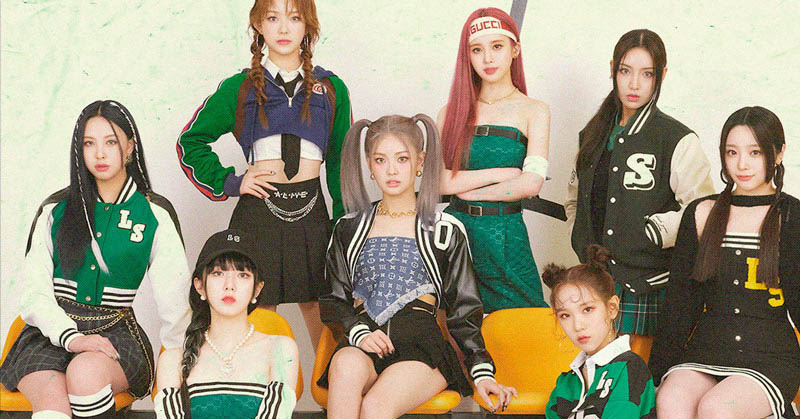 LIGHTSUM Shines Brightly in Their First Mini-Album, “Into The Light”

“Into The Light” will make you admire LIGHTSUM’s radiant beam

Every year in K-pop is always abundant with songs and comebacks. From newly-debuted K-pop acts to highly-anticipated returns, something new almost happens everyday. While 2022’s releases sound varied, girl groups continue to release hits that worm their way into everyone’s playlists. Sometimes, I believe that we can only describe 2022 as ‘The Year of The Girl Group’ as women-led acts continue to dominate playlists and charts. And in the case of the eight-piece South Korean act LIGHTSUM, their newest song ALIVE is another piece of evidence that makes it so.

Since their debut with the vibrant Vanilla and their comeback with the iridescent VIVACE, LIGHTSUM teeter the fine line between cute and elegant. With ALIVE, however, the group’s sound finally takes shape in the form one can only describe as bright. Much like their namesake, LIGHTSUM’s title tracks embody the feeling of light. If Vanilla is brilliant and VIVACE twinkles, one can only describe ALIVE as luminous, glowing. The soft aura of light slowly brightens before shining at full force.

In ALIVE, Sangah, Chowon, Nayoung, Hina, Juhyeon, Yujeong, Huiyeon and Jian sing about a bubbling romance. The pure, heart-racing kind of infatuation that fills you with glee. One can hear it in their colorful vocals harmonizing over a dynamic instrumental. In a press conference, Chowon shares that the group wants to show their honest and confident side. Juhyeon chimes in, “Also, simply listening to the song will boost their confidence and give them energy.” The group’s goal with the title track appears as the infectious electronic pop track that will send your spirits flying high, following through into the mini-album.

The following track, i, is a complicated love song detailing the push and pull of a tricky relationship. Like the complexity of emotions, the dreamy dance anthem sounds like a kaleidoscope. A tumultuous instrumental reflects a mirage of emotions—sometimes upbeat, tapering down to a trap beat before picking up again, accentuated by glimmering synths here and there. Hina recommends this song to their fans, describing it as “a dreamy song with a different vibe.” She adds, “I think we’ll be able to show another charming point [to LIGHTSUM].”

LIGHTSUM’s first mini-album leans towards light and airy instrumentals, it’s almost like walking on a cloud. This manifests the most in Good News, the electronic-infused R&B track that opens much like a song found in music boxes. This track feels like a breath of fresh air, a sonic palate cleanser that continues the high spirits the album embodies. Meanwhile, the mood picks up yet again with an edgier b-side: Q. The hip hop-heavy song builds up to the addictive chorus. Here, the group becomes bolder and more confident as they cheekily challenge the object of their affection.

RELATED: Hwang In Youp To Hold Fan Meeting In Manila On June 19

Into The Light closes with Bye Bye Love. It sounds more like Good News’ more earnest sister, with its bright arrangement and instrumental. The eight-piece group kicks insincerity to the curb, encouraging listeners to fully embrace themselves. They insist that the good to the bad memories, the painful and the joyous experiences make a person. As early as now, LIGHTSUM  shows off their ability to adapt to any genre while keeping their distinct flavor.

Overall, Into The Light lays the groundwork for LIGHTSUM’s path to K-pop stardom. It effectively shows off their different sides, the balanced intersection of sweet, bold and empowered. The group has managed to find their niche not only in sound but also in image. LIGHTSUM embodies the feminine, the edgy and the saccharine. Maximizing their complexities makes the group shine brightly in this era, leaving fans feeling excited for more. If anything, Into The Light will make you admire LIGHTSUM’s radiant beam  and it’s something you just can’t ignore.

RELATED: Check Out These Beauty Looks by K-Pop Girls For Your Next Date

Listen to LIGHTSUM’s first mini-album “Into The Light” on Spotify.