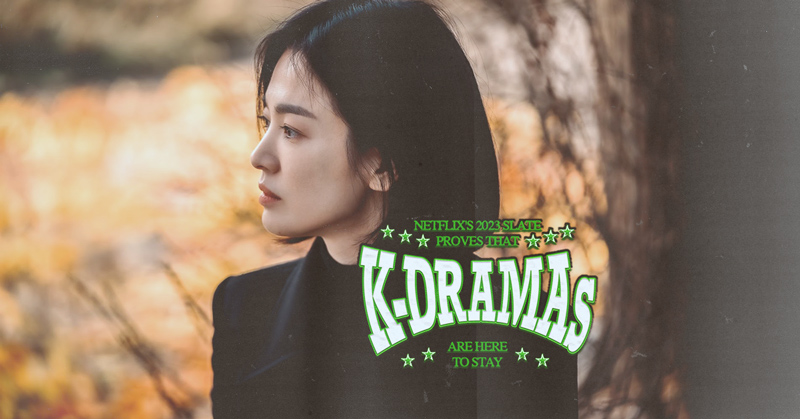 “You’re amazing, but you’re too dangerous,” might be from Descendants of the Sun, but it encapsulates how we feel about Netflix’s 2023 K-drama slate. It’s impossible not to get into the unique plotlines, top-notch acting and the overall production. K-Dramas bring comfort and make us feel connected to the characters. We can’t get enough, and it seems like Netflix can’t either! Grab some popcorn; here are the K-dramas waiting for you this year.

RELATED: I Watched My First K-Drama, Am I A Convert?

Does righteousness make vengeance acceptable? We’ll find out in part two of The Glory.  Moon Dong Eun (Song Hye-kyo) dedicated her life to getting even with her perpetrators. This sequel will show an unrelenting but beautiful portrayal of destruction, with each episode leaving you with perhaps too many emotions. With The Glory ranking first in the Netflix Global Top 10 (Non-English) TV charts, its second season is surely something to look forward to.

It’s 2071. Only one percent of humans have survived, people need respirator masks to breathe, and strict social stratification has been imposed. In such a world, becoming a delivery man is the only hope for refugees. This is why Sa-wol (Kang You-seok) looks up to 5-8 (Kim Woo-bin), a delivery man who possesses legendary battle skills. In an already struggling nation, who would dare be an antagonist? Well, there’s Ryu Seok (Song Seung-heon), the sole heir to Chun-myung Group, which capitalizes on oxygen.

A world driven by money is a cruel, unforgiving one. We see this in Bloodhounds, where two young men, Geon-woo (Woo Do-hwan) and Woo-jin (Lee Sang-yi), step into the world of loan sharks in their desperate need for money. They get caught up in a web of darker forces, led by the notorious Myung-gil (Park Sung-woong). Bloodhounds showcases the ever-changing course of life—the good, bad and ugly.

An office worker, Kim Mo-mi (Go Hyun-jung and Nana), hides her insecurities behind a mask as she transforms into an unrecognizable live-streamer every night. But for how long can she keep hiding, especially when she becomes involved in a particular incident? Effortlessly crossing between thriller and dark comedy, Mask Girl sends an important message about lookism through twists you’ll never see coming.

RELATED: Rating K-Dramas According To Their Loyalty To The Webtoon

K-Pop meets K-drama in Doona!. Won-joon (Yang Se-jong), an ordinary university student, develops a heart-pounding romance with Doona (Suzy), a former K-pop idol. The cast itself is something to look forward to; plus it’s directed by Lee Jung-hyo, who was also behind Crash Landing on You. Fall in love with a budding romance filled with chemistry strong enough to transcend all differences.

Greed is a monster—literally and figuratively in this K-drama. Gyeongseong Creature, set in one of Korea’s darkest periods, spotlights how two young people struggle to survive in the presence of a monster born out of human greed. Park Seo-jun and Han So-hee team up for the first time; the former plays Jang Tae-sang, the wealthiest man in Seoul, while the latter portrays Yoon Chae-ok, a detective with impeccable skills at tracking anyone down (yes, even the dead).

Goodbye Earth follows the story of two lovers, Jin Se-kyung (Ahn Eun-jin) and Ha Yoon-sang (Yoo Ah-in), after the announcement of an asteroid that will destroy the planet in 200 days. As a middle school teacher, Se-kyung struggles with the thought of children having no future. His long-time lover, Yoon-sang, leaves the safety of the United States to be by his side in Korea, the crisis zone. Goodbye Earth shows how individuals embody their values in their last few days on earth, and imposes an intriguing question: How will you live your life, knowing it’s about to end?

As of writing, there are 21 series, six films, five reality shows and two documentaries in the streaming platform’s 2023 line-up. Surely, this tells us that the Korean wave is here, and it is here to stay. So…which will you be watching first?