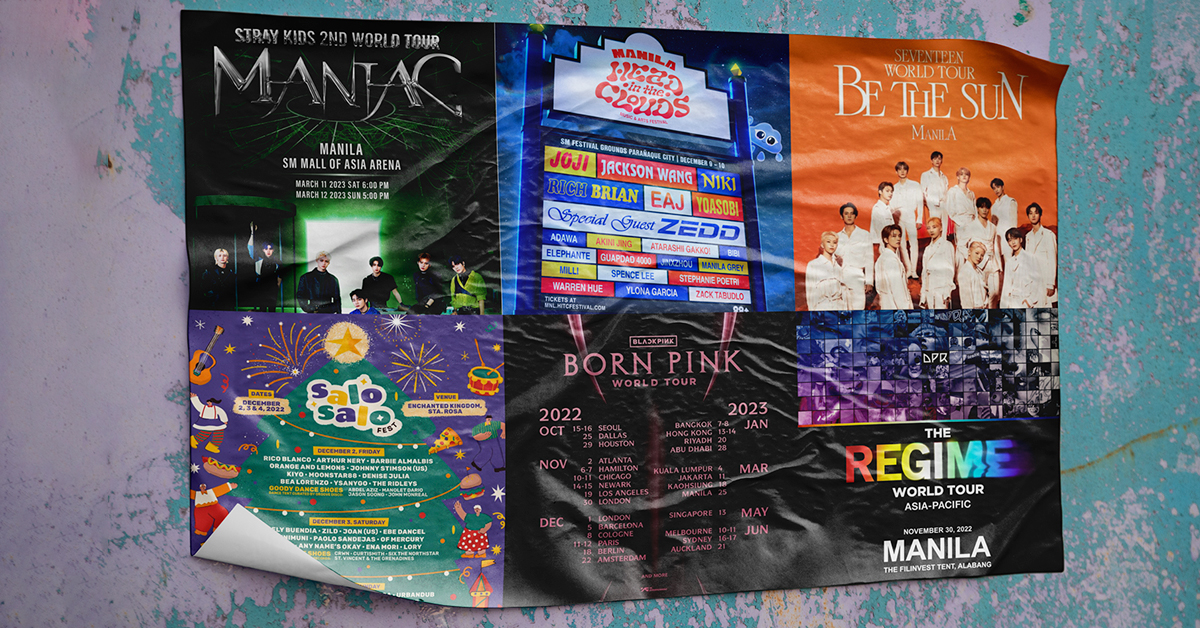 Live shows and fan meets are back and thriving

In 2021, many of us watched different countries with envy as music festivals, world tours and concerts slowly opened up. Musicians and artists were greeted with sold-out venues and packed halls, ending their shows with the crowd singing the song back to them. Meanwhile, we wistfully and patiently waited until we got the go signal to have live shows again on our side of the globe. Then, as intimate gigs began occupying our weekends, bigger production houses started announcing plans for 2022. So from postponed concerts and fan meetings to the live show we’ve been praying for, the year is shaping into a great time to be a fan.

From Stray Kids to BLACKPINK and Backstreet Boys, we bring you the ultimate live show guide for the coming months.

DPR: The Regime Tour in Manila

Where: The Filinvest Tent, Alabang

DPR Live, DPR Ian and DPR Creme will bring the gang gang to Manila with the Philippine leg of The Regime Tour. The multi-hyphenate creatives—rappers, singers, producers, songwriters and even filmmakers—fully realized their dream in 2017 and are here to share it with us. So you better not sleep on these dreamers. Regular tickets are still available on tickelo.com.

We’re definitely Sleepless because of the news: Epik High is coming back here. After their amazing Hallyuween run last October, the K-hiphop moguls will bring their Epik High Is Here Tour to the Philippines. Listen, dance and vibe with Tablo, DJ Tukutz and Mithra for an epic night at the New Frontier Theater. Tickets are still available via Ticketnet Online.

Oh it’s definitely going down this coming December! K-Pop girl group STAYC will greet their Filipino fans in their first fan meeting in the country. Make memories with Sumin, Sieun, Isa, Seeun, Yoon and J as they perform their hits Stereotype, ASAP and RUN2U. Seats are still up for grabs via SM Tickets!

Gear up for a one-of-a-kind theme park music festival with Salo-Salo Fest. Celebrate the Christmas season with your loved ones with friends by bonding over thrilling rides and the best the music scene has to offer. Imagine having joan, Parokya Ni Edgar and Ely Buendia all in one lineup? Plus, Karpos Multimedia’s Salo-Salo Fest is the first of its kind in the country, so this is one live show slash festival not to pass on.

Passes are still on sale via tickelo.com.

When you follow the map that leads to Maroon 5, all roads will bring you to the SM Mall of Asia Arena. Enjoy the company of Adam Levine, Jesse Charmichael, James Valentine, Matt Flynn, PJ Morton and Sam Farrar as you jam to their biggest hits: Payphone, Sugar and Beautiful Mistakes. Grab a seat at this show via SM Tickets.

BE YOU 2: The World Will Care featuring TVXQ, BoA, Chen and Xiumin of EXO

After a successful run with BE YOU: The World Will Adjust, Neuwave events continue to push important advocacies through music. The second installment comes in the form of BE YOU 2: The World Will Care, a show that will pay tribute to the elderly. A couple of SM Entertainment veterans will be gracing stages in Cebu and Manila for the cause. Join TVXQ’s Changmin and Yunho, Hallyu pioneer BoA and EXO members Chen and Xiumin for a night filled with amazing music. Lady Pipay and icons like Pilita Corrales and Ian Veneracion will also join the lineup of K-pop acts for both stops. Lukas Magallano will come on as support in Cebu, while P-Pop group G22 will rock the stage in Manila.

*Two-day passes for the Lineup Sale

A post shared by Head In The Clouds Manila (@hitcmanila)

88rising’s Head In The Clouds Festival, AKA the “Asian Coachella,” will have its second Southeast Asian debut in Manila, Philippines. Celebrate the best of the best artists of Asian descent and diaspora, along with culturally-inspired art and food experiences. All these and more will happen in one packed weekend. Presented by KROMA Entertainment’s very own LIVE MNL, this is one experience you shouldn’t miss.  So what are you waiting for? Get your passes now!

RELATED: Christian, Morissette, and Erik in Us for ‘Threelogy 2.0’ Tour

*These are prices for the Ultimate Keshi VIP Experience

Vietnamese-American singer-songwriter keshi will bring his Hell / Heaven Tour to Manila this December. After successfully releasing his debut album GABRIEL, keshi will wow his Filipino fans and might even sing iconic tracks such as like i need u, SOMEBODY and maybe even War With Heaven that night. Regular tickets are already sold out, but you can still join in on the fun with the Ultimate VIP experience. Secure your spot for this live show via Ticketnet.

SEVENTEEN’s Be The Sun World Tour in Bulacan

Good news for Carats! The boys of SEVENTEEN aren’t done with the Philippines just yet. After a sold-out two-night show at the SM Mall of Asia Arena, the boys will bring back their Be The Sun tour to Bulacan’s Philippine Arena. Catch your favorite tracks off Face The Sun along with S.Coups, Jeonghan, Joshua, Jun, Hoshi, Wonwoo, Woozi, DK, Mingyu, The8, Seungkwan, Vernon and Dino. Get your plans in order and book your seats via SM Tickets because some sections are already sold out.

Lace up your Sneakers and prepare to go Loco with Ryujin, Chaeryong, Yeji, Lia and Yuna of ITZY. Catch the killer quintet and monster performers for a night you will never forget. Due to popular demand and tickets selling out on the first day of the sale, ITZY will perform two shows for Filipino MIDZYs. Day two tickets are already on sale via SM Tickets. Manifest a low queue number so you can secure tickets to this unforgettable live show. We all know you Wannabe right there with them, MIDZYs!

PH Engenes, don’t fret! You can still catch Jay, Jake, Sunghoon, Sunoo, Jungwon and Ni-ki of ENHYPEN this 2023 for their Manifesto in Manila concert. Enjoy their insane synergy and performances of their hits DRUNK-DAZED, Polaroid Love and Pass The Mic. While you wait for the seat plan and ticket prices, sign up for the Fan Club pre-sale until November 22, 1PM to secure tickets ahead on December 10 from 10AM to 10PM. Tickets officially go on sale on December 11 from 12PM onwards.

The Vamps The Greatest Hits Tour

To celebrate 10 years in the music scene, the pop-rock band The Vamps will bring their Greatest Hits Tour to the Philippines. The four-piece act recently released 10 Years Of The Vamps, a compilation album that also includes new music. So while we wait for further announcements, prepare yourself to jump and jam with Brad Simpson, James Brittain-McVey, Connor Ball and Tristan Evans.

Tickets are on sale via SM Tickets.

Get up close and personal with Heather singer Conan Gray. After the success of his album, Superache, the Gen Z singer-songwriter will bring his songs for his Filipino fans to enjoy. Dance the night away to Telepath and feel all your feelings with Best Friend. Tickets went on sale last November 18, so there are only floor seats left for hopefuls who want to join in the fun on SM Tickets.

RELATED: Jonathan Manalo Celebrated 20 Years of Music With Over 30 Artists

February 20 has us choosing between our favorite 90s boybands. The Backstreet Boys will take over the SM Mall of Asia Arena this coming love month, a tour that finally manifested after the pandemic’s onslaught. Enjoy the timeless pull of their classics while listening to the tracks of their eighth studio album DNA. It’s been a long time coming, so give all five members some love by securing seats via SM Tickets.

Wilbros Live brings back the charm of the 90s with this one-of-a-kind concert. The biggest British boy band of that era, Westlife, will rock the Araneta Coliseum next year for their The Wild Dreams tour. The tour promotes their 12th studio album. Talk about longevity! If you enjoyed My Hero, Starlight and the ever-so-classic Uptown Girl, it’s high time to get tickets to this once-in-a-lifetime show. Try your luck and purchase tickets on TicketNet Online.

After a virtual fan meeting with Kmmunity PH and a virtual concert during the pandemic, STRAY KIDS will now meet their loyal Filipino Stays. With hits like God’s Menu and their latest song Maniac, best believe both nights will be electrifying. Seize your chance to see Bang Chan, Lee Know, Changbin, Hyunjin, Han, Felix, Seungmin and I.N. in the flesh by jumpstarting your saving spree. You definitely won’t regret it.

Ticket Prices: Both nights are officially sold out.

As Jennie, Jisoo, Rosé and Lisa entered their “fuck it” era with BORN PINK, the quartet plans to bring the attitude (and pain) to the Philippine Arena. After all, it’s been a couple of years since they physically met Filipino BLINKs, especially after an endorsement stint with Globe Telecom. After an eventful selling weekend, we’re here to report that BLACKPINK’s BORN PINK in Bulacan is officially sold out for both nights. Push your luck by checking on (justifiable) resellers on Twitter and other platforms. Secure tickets carefully!

The 1975 At Their Very Best in Manila

It’s been a hot minute since The 1975 graced the MOA Arena stage. With two pandemic-era albums under their belt, Notes On A Conditional Form and Being Funny In A Foreign Language, the pop-rock band will be reuniting with their Filipino fans for a two-night show. Catch Matty Healy, George Daniel, Adam Hann and Ross MacDonald as they sing their new hit About Your and classic tracks like Sex and Somebody Else this March 2023. Floor seats for the first day are still available on SM Tickets.

RELATED: We’ve All Done Some Growing Up & So Did These 2014 Tumblr Icons

Would you believe me if I told you that these shows just touched the tip of the giant iceberg? We’re all definitely just getting started. 👀