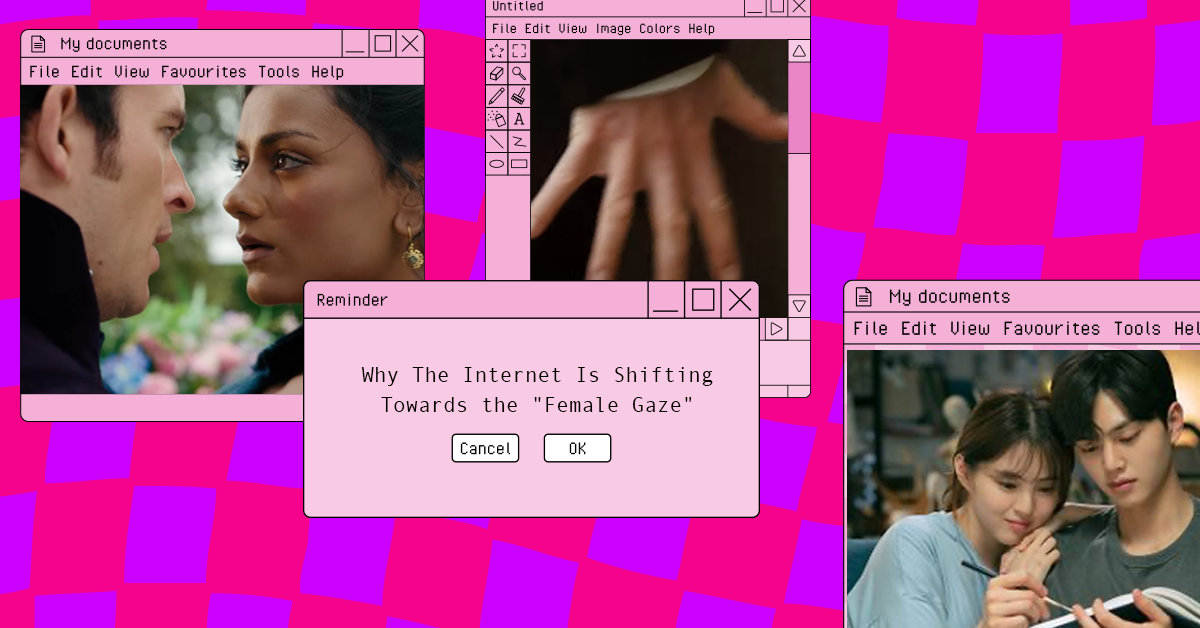 Why The Internet Is Shifting Towards the “Female Gaze”

If you’ve been around the internet for a while, you’ve probably seen people use the female gaze more often than usual. The term is often used in describing scenes and fictional characters, often male, which were written with the female experience in mind. Characters who are reliable, emotionally vulnerable, self-aware and absolutely whipped for the female protagonist. Think Mr. Darcy from Pride and Prejudice (2005), Park Jae-on from Nevertheless (2021) and Anthony Bridgerton (2022). But as TikTok bestows new meanings to niche jargon at an undeniable speed, we see this term used on anything remotely applicable—even outside of general media criticism.

But before we get ahead of ourselves, we need to know what the term actually means. Laura Mulvey first coined the female gaze in 1975 in her essay called Visual Pleasure and Narrative Cinema. The term stands opposite to the “male gaze.” She points out the neglect in depicting female characters and the lack of their desires. Because essentially, the male gaze represents the views of the heterosexual male creator, character and, in effect, viewer. The film creates this lens where the audience identifies with that limited experience, where the male does the looking and women’s bodies are getting looked at.

So to subvert that trope in film, Mulvey coined the female gaze. This essentially refers to how women view the world around them, including men. The lens represents how women see themselves and their authentic feminine existence, focusing more on what women feel and less on what they see. As a result, female characters have more agency in their choices and lived experiences, showcasing them as actual humans with dreams, expectations and flaws instead of passive objects and plot drivers.

But, of course, the internet has taken the term and molded it to fit other contexts and definitions. So we try and get to the bottom of it:

The internet’s definition of the “female gaze”

The term has been circling  TikTok since 2021 when women creators started showing off their style transformations. According to the videos, they started dressing for the attention of men before finally dressing for themselves. TikTok user Madison Wild (@madisonxwild) puts the term in the context of fashion, where women dress, present themselves and exist in such a way as to please themselves and appeal to each other and not at all for the opposite sex. This isn’t an entirely new concept, but it received a new umbrella term thanks to language’s component of taking new meanings the longer they exist. Of course, boxing “aesthetics” and personal styles rigidly under the male or female gaze renders the concept useless.

The term then goes viral thanks to Strange Kevin, the so-called icon of the female gaze whose flame fizzled out as fast as it sparked. Several users on the app praised the man for supposedly mastering their definition of the female gaze. This started with a video of his lip-synching to Justin Bieber’s Boyfriend, starting with an awkward Kevin who switches into a confident guy mid-way, beckoning the viewer. This led him to receive 22 million views and over three million followers, mostly people who find his content attractive and hot.

According to psychologist and TikTok user Emily Thiede (@ektwrites), Kevin’s content is attractive to some women because, despite being so compelled by the person he’s staring at, supposedly the person on the other side of the screen, he manages to control himself. He stays in his lane and remains unthreatening and not intimidating, giving the so-called power to the viewer, who is assumed to be a woman. But then people began unraveling his history of problematic and misogynistic behavior, causing them to drop Kevin as fast as they fell in love with his content. So no, someone who can simply act has not “mastered” the female gaze.

RELATED: South Korea’s Got a Problem With Their Olympic Archer’s Hairstyle

What do these tell us?

While personal style is subjective and being drawn to Strange Kevin and creators who put out the same content is a choice (one that I have not made and will never make), the constant search for what counts as the female gaze for such things shows us something. From fashion to dating to understanding why women like what they like, a large part of the world is still led by the patriarchy. And identifying things that go against this dominant worldview, which also counts as participatory in the female gaze, helps us realize that things are looking up and some change in perspective has blossomed within.

We see it in fashion trends, such as Julia Fox’s man-repelling bleached brows or the popularity of Gabbriette Bechel’s ghoulish “succubus chic” look. People now prefer dressing for themselves as opposed to seeking the approval of the opposite sex. We see it in our favorite films and shows, pivoting their depictions into quiet, romantic and emotional moments between two consenting people. Women’s experiences are depicted and validated, allowing them to heal from horrifying realities we face every day. It’s a long-time coming, so we appreciate whatever change we observe.

RELATED: On Gender Bias at the Workplace in Present Times

But there also lies a danger in deeming everything remotely subversive as female gaze-y, because it might divert us from the fact that misogyny is still pretty much alive and stands as a systemic, societal issue. While undoing age-old narratives is worth celebrating, the rest of society is run by straight men and still adheres to the standards made by the same people. We see it in politics, rape culture and the continuous blockage of the SOGIE Equality bill from passage—a barrage of problems we can’t solve by only pleasing ourselves. So yes, while the female gaze has helped us identify waves we’ve individually made, let’s not forget that there are more battles we need to fight collectively.