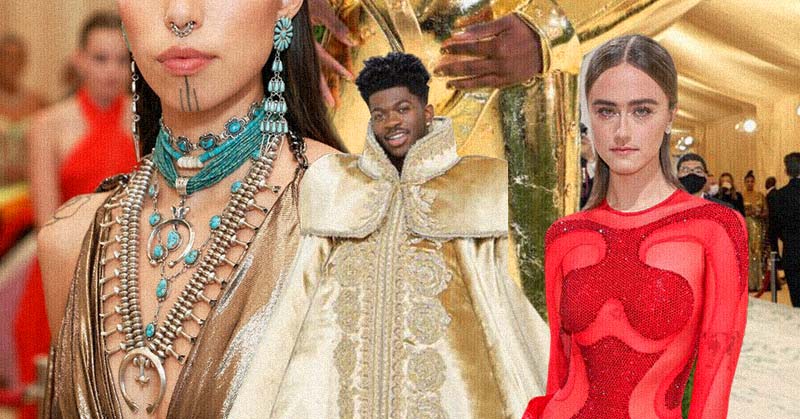 The Met Gala, fashion’s biggest night out, is back after a break mid-pandemic. And as it goes on the red carpet, choices were made. The theme of the 2021 Met Gala fundraising event, “In America: A Lexicon of Fashion,” gave guests free rein to don their interpretation of “a celebration of American fashion.” And free rein, it all truly was.

For the rest of the world standing by, starved for an over-the-top production or a sense of daring when approaching the theme, the 2021 Met Gala was a mixed bag. A little less star-spangled, a little more old-Hollywood glamour. Overall, a whole lot of going rogue. The invite did list “American independence” as the official dress code, so perhaps independence from said dress code was part of the shtick.

All that said, memorable looks were served in between helpings of awards show and (dare we say) prom-ready fashion. By whom? Scroll through and see.

After making her debut in New York Fashion Week earlier on, indigenous model Quannah Chasinghorse made her first Met Gala appearance. Wearing custom Peter Dundas, the 19-year-old industry up-and-comer opted to accessorize with traditional Navajo jewelry given to her by her aunt.

The Solar Power singer, still very much in her summery cult leader era, gave us native high priestess-meets-Elvis Presley on tour. The two-piece look by emerging American label Bode was adorned with charms, antique gems and pressed pennies, then paired with an equally ornate headpiece. Lorde, take us to church.

RELATED: How Well Do You Know Your Lorde Lyrics?

The YouTube content creator paid tribute to Marsha P. Johnson, highlighting the famous words of the late trans activist: “Pay it no mind” (her response to inquiries about her gender and what the “P” in Martha P. Johnson stood for). One of the more political fashion statements of the evening that took the subtler route.

Granted the Kardashian-Jenner clan tends to gravitate toward the naked dress, it’s never looked better than the Met Gala take by Matthew Williams for Givenchy. Full glam everywhere else save for the beauty look itself: it straddles the line between old-Hollywood and modern muse.

Leave it to Zac Posen to understand the assignment—and icon Debbie Harry to wear the hell out of the designer’s custom Miss Rock ‘n’ Roll Americana look. No stranger to designing for and dressing muses for the Met Gala, Posen took a more patriotic approach to the theme with the Blondie frontwoman.

Can’t be American in theme now without going Western, can it? Westworld actress Tessa Thompson, one of the few to live that fantasy, wore Iris van Herpen Fall 2018 Couture with leather boots and a cowboy hat in hand. A stunning desert rose, period.

Alton Mason in a Theophilio

The American runway model left his look to the hands of Theophilio’s Edvin Thompson: an all-white number where attention, quite evident in the beadwork and fringe, was in the detail. First impression: if Michael Jackson made a cameo at the rodeo.

The Crazy Rich Asians star, in another thoughtful tribute, dedicated her Met Gala look to legendary actress Anna May Wong, described by Chan as “a trailblazer, fashion icon and woman ahead of her time—she paved the way for those who came after, and continues to inspire.”

Singer Ciara and Norwegian designer Peter Dundas picked up right where they left off in 2019, teaming up again for the 2021 Met Gala. A tribute to American football, sure, but also to Seattle Seahawks quarterback and husband Russell Wilson.

The Keeping Up With the Kardashians star made a statement in an all-black Balenciaga bodysuit that borrowed heavily from the style, as of late, of estranged husband Kanye West. With not much of a narrative given about the outfit choice, this is quite literally a blank slate on which people are free to project their own interpretations (which in itself is telling).

The Schitt’s Creek actor donned a bespoke Loewe outfit featuring the artwork of American LGBTQIA+ activist and artist David Wojnarovicz. “Jonathan and the design team built upon an image of two men kissing from Wojnarovicz’s work, Fuck You Faggot Fucker, named after a homophobic cartoon the artist had come across,” he said on Instagram. “But rather than feed on the message of hate, we wanted to celebrate queer love and visibility.”

After quickly being labeled American fashion’s new “it” girl following her stepmother’s inauguration, the 22-year-old has done well for herself to cement the title. Case in point at the Met Gala. Emhoff was of the very few to clearly rep a hallmark in American fashion: athleisure.

The INDUSTRY BABY singer made his Met Gala debut to much fanfare after pulling a Lady Gaga with a theatrical outfit reveal on the red carpet. The “three-part LGBTQ+ American fairytale,” as the brand described in an Instagram post, strips the singer down: from a heavy, gold-beaded cape, to a golden, Medusa-adorned armor, to a final skin-tight bodysuit.

RELATED: Alexander Wang and The Double Standards of the Fashion Industry

What would the 2021 Met Gala be without Rihanna? Wouldn’t even want to think about it. The member of Met Gala royalty wore Balenciaga Couture: an all-black, ruffled overcoat with a matching beanie, offset by gorgeous Maria Tash jewelry. “I wanted a look that seemed very powerful yet feminine yet like a black hoodie, which is the thing that we’re usually incriminated by as black people,” she shared with Essence’s Gia Peppers. “I wanted to empower that. I wanted to take it and make it mine and make it fashion.”