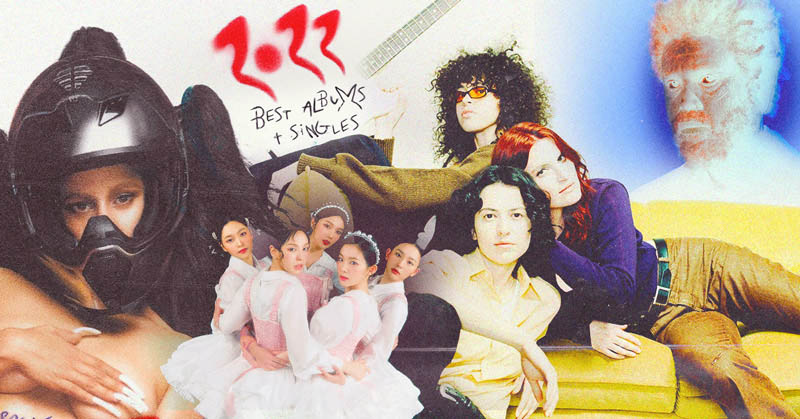 All the bops we love from the first half of 2022

We’ve said it once, and we’ll say it again: nothing gets us through high mountains and bad times better than good music. Long work day? At least your favorite artist plans to drop a highly-anticipated album at the end of the week. Feeling sour? Let your most played song take you to a different headspace.

For 2022, the year where things slowly crawl back to pre-pandemic normalcy, new music continues to provide the soundtracks to our road trips. And up ahead, we list a few of 2022’s best albums and singles. These just prove that it’s shaping up to be a good year—in music at least.

The Single: Yet To Come

I could wax poetry about BTS, their legacy and their lyrics, but for this story, I’ll let Yet To Come do it for me. The soft, easygoing R&B ballad sends the perfect message: there’s more to look forward to in life. While many love falling back on saying like “I peaked when I was younger,” BTS flips the mindset around into one of motivation and celebration. Instead of remaining stuck in the past, why not take life by the neck and create more unforgettable memories? We’ve only got six months left in 2022—let’s make them count.

While, of course, Charli XCX has established herself as an icon of hyperpop, there’s no denying that she knows how to make mainstream pop music that we eat up either way. From the cosmic New Shapes featuring Caroline Polachek and Christine and The Queens to the addictive Yuck, Charli XCX crowns herself as pop music royalty. With palpable beats, swirling electronic effects and hooks that will stay in your head forever, she’s managed to nail the equation many struggle to crack. So it seems fitting, too, that CRASH serves as a fifth and final album of a 13-year-old engagement, doubling as an in-your-face adieu to Atlantic Records.

One of my favorites from the local music scene comes from ena mori. After releasing the emotional Oh, Bleeding Hearts?, the Japanese-Filipino singer goes into the complications of jealousy and insecurity in VIVID. The funky and groovy pop song will have you bopping to the tune, sure, but ena mori picks apart the true root of envy: insecurities. Take cues from ena mori and internalize that letting insecurities take over makes the Green-Eyed Monster materialize more vividly.

The Single: tears in the club

The ever-so elusive and distant FKA twigs bares more of her soul and personality with CAPRISONGS. The 14-track album contains tracks touching upon pop, R&B, London grime and dance hall—many of the genres she explored and grew up with. From the emotional tears in the club to the upbeat papi bones, FKA twigs illustrates the rollercoaster of life during the pandemic. But perhaps what makes this album one of the best of 2022 is the extraordinary heart that comes with it. Creating this album became a healing process for her—something she hopes to extend to those who listen.

The Single: As It Was

Of course, how can we leave out Harry Styles’ newest body of work in this list? As we said, Harry’s House throws it back to the familiar. Through this record, the singer finds a balance between the sounds of his past and the genres of his present. Coupling that with stories he hopes to tell and deep secrets he admits through lyrics, Harry Styles welcomes us into his humble home.

The Single: The Heart Part 5

One of the hottest and most anticipated releases of 2022 comes from Kendrick Lamar. Kung-Fu Kenny shares the happenings in his life, precisely 1,855 days since the release of DAMN. TL;DR: the days didn’t always have sunshine and rainbows, smooth sailing and calm waters. Over a mix of funk and soul tunes, he admits his insecurities and clings to his beliefs. After an all-time high with DAMN., and curating the iconic Black Panther soundtrack, the rapper turns inward. He then finds rest, reprieve, purpose and motivation through his close circle of friends and his family.

And much like every one of us in quarantine, we realized this, too.

“Not everything has to be in such a moody, broody sort of atmosphere. I’m more than that genre, and I am trying to prove that with this next record,” keshi expressed in a previous press conference. Back then, we only knew of GABRIEL as his then-unnamed upcoming debut album. A jump away from this lo-fi roots and sad, almost angsty message in his music. Through GABRIEL, keshi retains his signature sounds, such as acoustic guitars and R&B touches, all the while reinventing the genre he helped shape.

RELATED: 9 Must-See Concerts and Music Festivals in the Philippines This 2022

MUNA’s self-titled album marks their first with Phoebe Bridgers’ label, Saddest Factory Records. Coincidentally (or intentionally), the album opens with Silk Chiffon featuring the owner herself. Dabbling with country-laced pop ala-Kacey Musgraves, hypnotic electronic chops or 2000s-era pop-punk, the entire album feels like breaking free. Through this album, the queer band continues to make queer music and finally carves out a solid space in the music scene without having to shrink themselves to fit whatever standards. Just like what they sing in What I Want, “I’ve spent way too, too, too many years not knowing what / What I wanted, how to get it, how to live it and now / I’m gonna make up for it all at once.”

In an Instagram post back in May, NIKI explains the disappearance of her pre-88rising content on YouTube. The Every Summertime singer opens up that her upcoming sophomore album is “without a doubt” the favorite thing she ever made as a musician. She describes it further: “It’s where younger me and current me meet and hang and have a fucking blast together.” The first taste comes in the painful single called Before. The narrative ballad sounds like a cross between Driver’s License Olivia Rodrigo and Taylor Swift from 1989—far different from her R&B and pop hits like Indigo and La La Lost You. Before’s instrumental is almost completely simple enough to let the lyrics do the storytelling—effectively breaking our hearts.

The Single: That That ft. SUGA of BTS

Aside from sad ballads, 2022 albums and singles are flush with dance tracks. And one of the best ones from this year comes from PSY and BTS’s SUGA: That That. Equal parts, fun, addictive, campy and shitpost-y, That That encapsulates humor that transcends different generations. Light-hearted and fun, That That is a celebratory anthem welcoming luxuries we had to give up in the past two years; ridiculous dance parties with friends included.

The Album: The ReVe Festival 2022 — Feel My Rhythm

The Single: Feel My Rhythm

Is it really a half-year roundup without the queens of Red Velvet? Feel My Rhythm, as both a mini-album and a song, deserve to be called one of 2022’s best albums and singles. The twinkling pop song laced with smooth strings and heavy trap beats combines both of the girl group’s “red” and “velvet” sides. Aside from jaw-dropping visuals accompanying this soaring track, Red Velvet preaches to the listener to follow one’s dreams; a message abundant but always welcome during times of uncertainty. Other notable songs include the sassy beat of Beg For Me and the lovelorn In My Dreams. All in all, this makes one of K-pop’s strongest comebacks of the year.

Spanish singer Rosalía kicks off 2022 by releasing her third record, Motomami. The album, flush with different genres, including the iconic pop-bachata hybrid La Fama, establishes the pop star’s artistry in unabashed vigor. May it be the funky rhythm in Saoko, the proud and flex-worthy La Combi Versace or the emotional Como Un G—Rosalía finally sits comfortably as a fearless pop star on the world stage. While many would assume that different genres create a mess, Motomami’s magnum opus-worthy exploration of modern and traditional genres make Rosalía a star.

The Album: Out of Time

Perhaps one of the earliest releases that continue to have us in a chokehold as a population is The Weeknd’s Dawn FM. A sonic exploration of purgatory and the afterlife, Dawn FM’s sizzling electronic dance sound drawing influences from the 80s-era new wave and funk will have you hooked. But one of the most striking singles off the album is Out of Time. The Weeknd pays homage to another popular 80s genre: Japanese city pop, by sampling Tomoko Aran’s Midnight Pretenders in this song. Much like the heavy traffic—whether IRL or on the way to the other side— The Weeknd dreams of waiting it out along brightly-lit cityscapes.

Did we miss other 2022 albums and singles that deserve to be on this list? Sound off in the comments below!